Until now my Bay Area-standard for puppetry resided at the Storybook Puppet Theater of Children’s Fairyland in Oakland with the seasonal exception of Punch & Judy shows at the Dickens Fair, the hilarious Nick Barone puppet shows at library branches or in a different genre, the Fratello Marionettes. 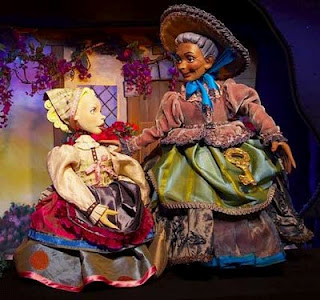 puppet-show-turned-puppet-ballet, I was very jealous that the Bay Area failed to offer such shows. But now I feel much better.

What Zanzibar offers is very different from Basil Twist’s but it definitely deserves praise and applause for the professionalism and artistry of the show.

Even before the curtain opened to their production of Cinderella at the Starlight Room of the Sir Francis Drake Hotel in San Francisco, there was a magical buzz in the air. Dark room, purple lights, massive puppet theater stage with velvet and rhinestone curtains, symphonic music from Prokofiev’s Cinderella ballet and Gounod’s Faust opera.

My two girls wanted to get upclose even though I warned them there might be loud noises and explosions of fairy dust in the room. Throughout the half-hour that the show lasted, they wouldn’t take their eyes off the stage. Everything was so well done, the different voices on the puppets, the deep three-level sets with Christmas light curtains, the music, it was just a big treat.

Interestingly enough, I saw quite a few adults without children in the audience. Isn’t that a sign?

One thought on “Cinderella Puppet Show”