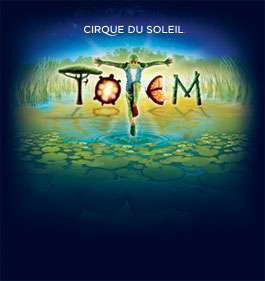 That’s it, I got my tickets for opening night: one for my mom, two for my girls, two for hubby and I. The Cirque du Soleil show Totem runs from October 28 through December 18, 2011 in San Francisco, a grand appetizer before the holiday craze. It’ll be staged in a big tent by the AT&T Park. As I’m going to review the show on Frog Mom, I’m lucky to score 2 tickets and I get to share a 20% discount with my readers. Savvy?

When ordering your tickets, click on this link and enjoy a 20% discount off the general admission price. That’s substantial savings given the price of the seats. Hey, you get to enjoy more popcorn! Or get the music CD to take home. Or both.

Obviously I haven’t seen the show yet but my first thought when I saw the poster was “OMG, they’re doing Avatar on stage?” That’s what it looked like with the trees and the blue and the water and the guy dressed in green. It was a bit I-see-you-ish.

Then I read the synopsis: “TOTEM traces the fascinating journey of the human species from its original amphibian state to its ultimate desire to fly. The characters evolve on a stage evoking a giant turtle, the symbol of origin for many ancient civilizations. Inspired by many founding myths, TOTEM illustrates, through a visual and acrobatic language, the evolutionary progress of species. Somewhere between science and legend TOTEM explores the ties that bind Man to other species, his dreams and his infinite potential.”

Ah, so there is Avatar potential! But mostly there’s a big WOW potential. The only show of the Cirque du Soleil I ever saw was Corteo in San Jose in 2006 and I was amazed by the grandiose decadence and extravagance of it all. My daughter was 3 years old then and absolutely not old enough to appreciate the many facets of the show but she still enjoyed the lights, the sound and the music.

This Friday, I expect nothing less than to be impressed.

What I Want To Know About This Show

What will I look for in Friday’s show? Obviously, I want to know what’s an appropriate age for kids to attend so you can take your whole tribe. I also want to know if it’s scary, if it’s funny, if my girls will want to run out the door or if they will be transfixed on their seats. I want to know that adults enjoy the show to the fullest, that it’s complex yet accessible, that the music is as good as I remember it, that the overall quality of the show explains why people keep flying to Vegas to see O.

Most of all, I don’t want to get bored and I don’t think I will. I hate it when there are dull moments in a show and I’d like this one to make my heart beat fast like a James Bond movie.