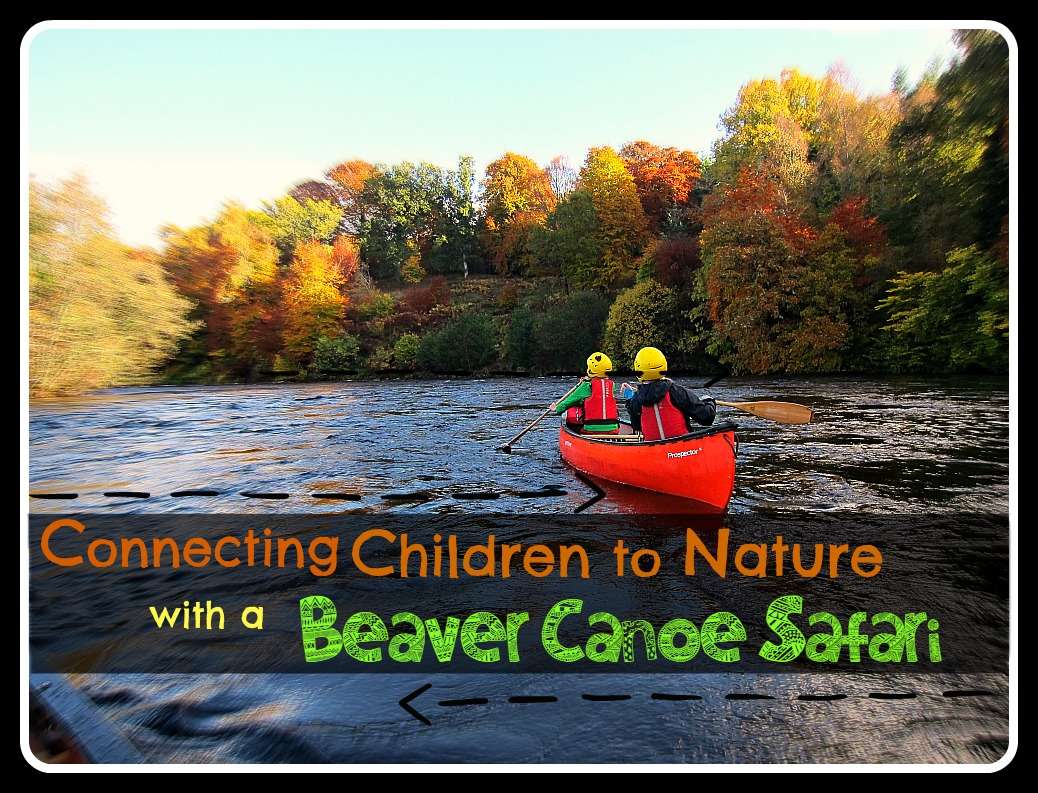 > Connecting Children to Nature with a Beaver Canoe Safari (Podcast)

Connecting Children to Nature with a Beaver Canoe Safari (Podcast)

When I planned a trip to Scotland in the fall, I had canoeing with my girls in mind. Being outdoors, enjoying autumn colors and breathing some fresh air sounded great to me. However, I hadn’t realized that a canoe trip could also double up as a fantastic way to connect children with nature until a local canoe outfitter suggested it. How about a wild beaver canoe safari? Shining a wildlife light on a canoe trip wouldn’t require any extra work on our end and we might be able to see signs of wild beavers, recently reintroduced in Scotland after 400 years of absence. This was too good to pass. It didn’t take me long to agree and I was inspired to create a podcast out of our canoe excursion on the river Lyon.

Beyond the audio, I want to transport you to the magnificent Scottish Highlands in pictures. Think of this as a companion post.

Our canoe adventure started on a rainy morning in Aberfeldy, a small town surrounded by green hills and made famous by a Robert Burns poem (The Birks of Aberfeldy). We met Biscuit, from the canoe company Beyond Adventure, by an arched bridge over the river Tay. Biscuit is not his real name but it’s such a fun nickname that we used it all day. He drove us to the launching point and there, explained the next steps. The plan was to use the two top canoes in his trailer but before we got there, we put on our raingear and safety vests, and put away valuables in dry sacks. 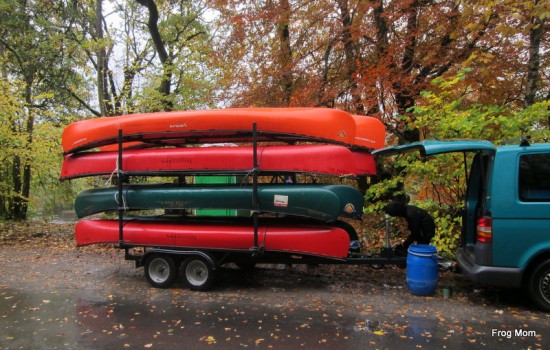 Once kitted out, we all helped carrying the canoes down to the river, as well as the dry food barrels and paddles. 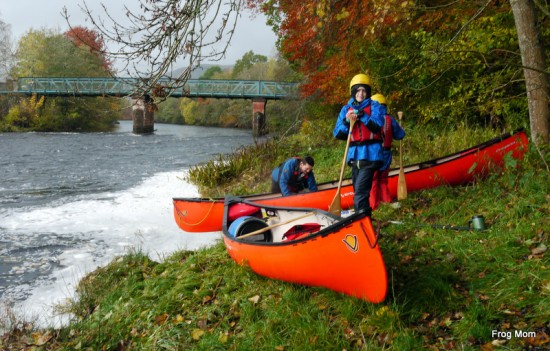 Initially, we did one adult and one child per canoe and practiced crossing the river, paddling upstream, crossing again and stopping. Right after we really launched, torrential rains fell on us and I took this photo thinking that we’d probably laugh about it later. It rained so hard that we were even laughing during the downpour. 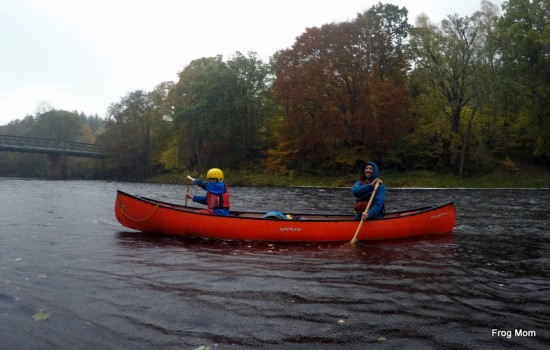 My, it was wild! Fortunately, we were completely protected by our rain gear and the heavy downpour was replaced by lighter rain. That was right when our river joined the larger river Tay. A bit further downstream, Biscuit spotted a good place for us to stop and explore. And look what we found – beaver teeth marks and beaver woodwork on a stump. 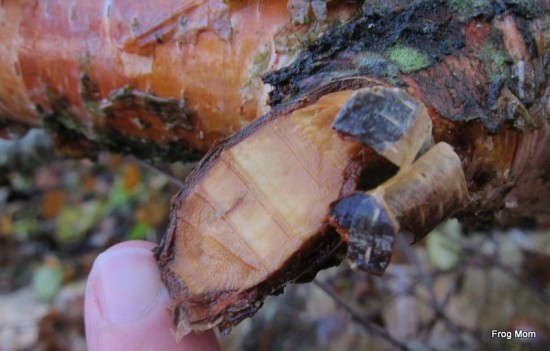 Further inland, the beaver tunnel connecting the beaver pond to the river. 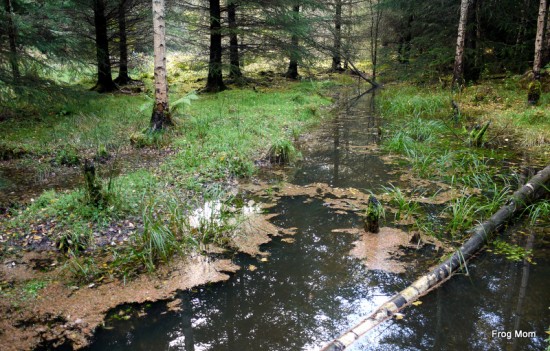 Only a hundred meters further, the beaver dam created a large and shallow pond lined with penciled trees everywhere. Just check this out! Next to four or five trees already gnawed was another tree almost ready to fall. It was a real balancing miracle that it was still standing upright but surely, it wouldn’t last another night. 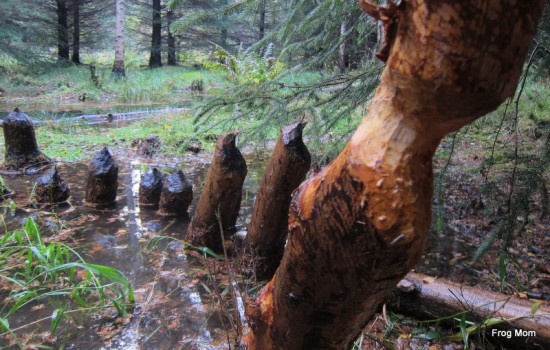 Nice work, right? And here is the fine beaver dam, just like it is described in The Chronicles of Narnia. Ours didn’t have a frozen river but it was just as good. 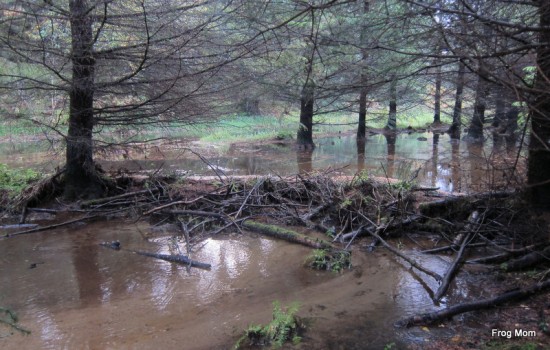 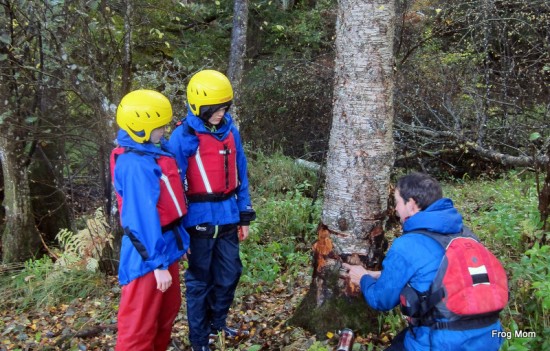 Seeing, hearing, smelling and touching really gives kids a completely different appreciation for the natural world and this was quite exciting. We’d never imagined we’d strike gold and see so many signs of beaver activity along the river, not 200 meters from the river’s edge! Getting hungry, we retraced our steps to the canoes and had hot chocolate and lunch. Lucky for us, the sun came out. 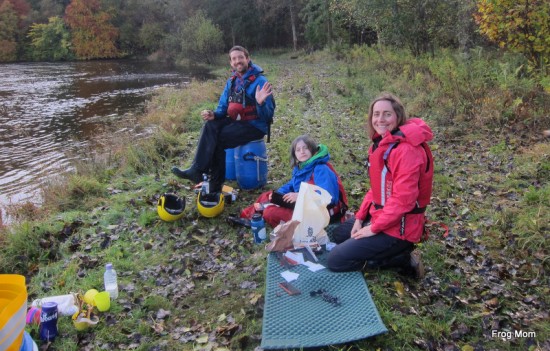 Energized by the sun’s appearances, the girls decided to try to paddle a canoe by themselves. After basic instructions, they set off by themselves. 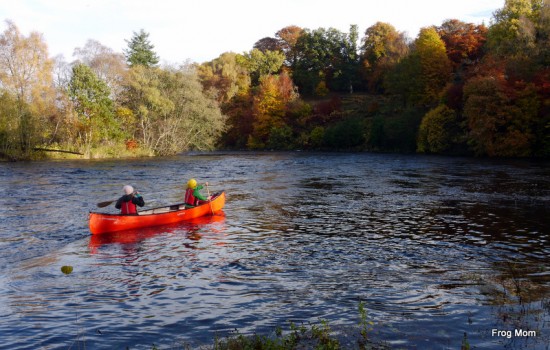 They were so thrilled that from that point on, they paddled their own canoe until the end of our beaver safari. We reached an island in the middle of the river and noticed that the island itself was partially flooded, making it easy for us to paddle through the central channel. As we approached, we startled a flock of geese who were quietly napping on the river. They all took off and disappeared in a matter of seconds. 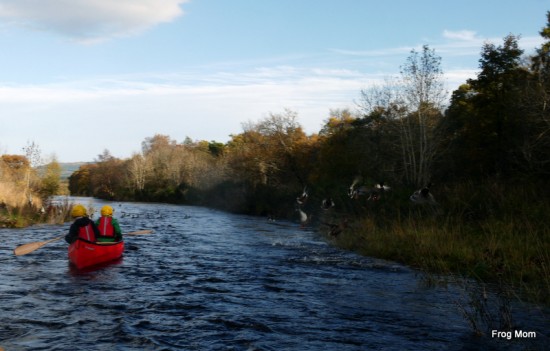 With the canoes tied to a tree branch, we set foot on the small grassy island and went to scout the surrounding. You’ll never guess – more beaver work! 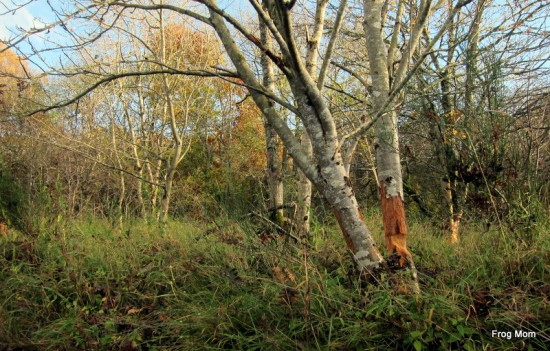 Truly, it was astounding how the large rodents had managed to turn much of the river banks into a giant beaver playground and kitchen, as beavers are herbivorous and feed on tree bark and grasses. To play a game, Biscuit and my girls found some sticks and snapped them to compare the different stick snapping sounds. 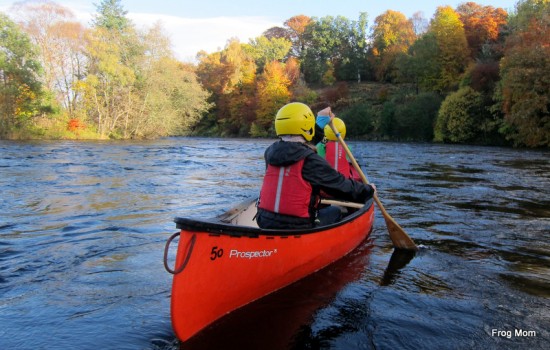 It was time to end our adventure and less than a mile downstream, we found the bridge where we’d met Biscuit in the morning. 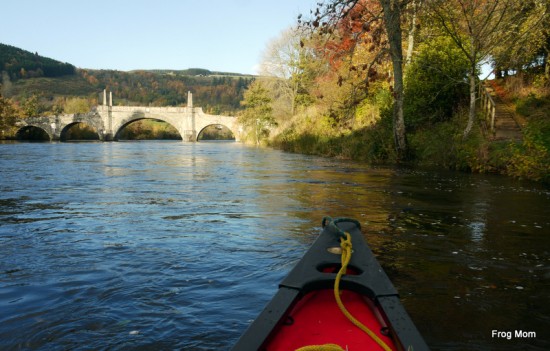 It turned out to be a wonderful day and we learned lots of wild beavers, things we never even suspected. Beavers prefer white birch trees as a snack and peel the bark with their teeth after having downed the tree by “penciling” it. Judging by tree marks, their front teeth must be the width of a child finger. Beavers have the ability to create waterways, mud slides and ponds to better connect and thrive in their environment. They like beeches and aspens but not pine trees – those were left remarkably alone. Their teeth never ever ever stop growing. And lots more.

If you can take part in a local nature adventure with your kids, don’t hesitate and go for it. Connecting children to nature really means that children need to experience nature by themselves and it’s usually a lot of fun for them. Plus, learning outside usually goes with being active outdoors and that’s a definite advantage over watching a TV nature program.

I’ll try to some ideas of nature exploration that are easily accessible to families but if you have any to share, please use the comments!

To Organize Your Canoe Adventure in Scotland

Canoe company in the Central Highlands

How to get there