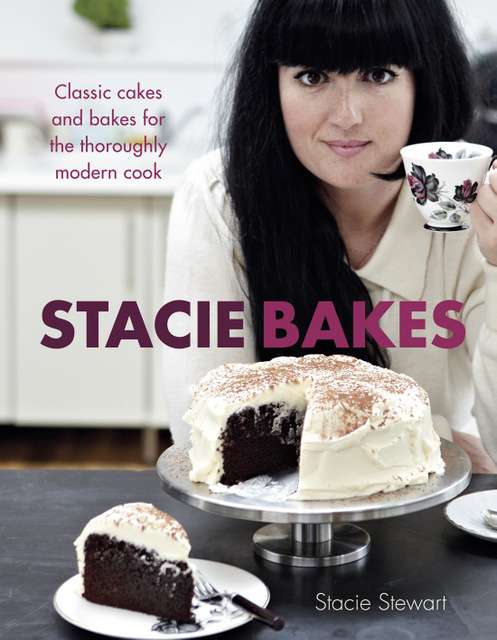 There was a time when scones were pretty much the only known example of British baked goods in France. Beyond scones was a vast culinary black hole of sweet despair after your roast. Not even nothing worth mentioning, just nothing. Imagine that. For the odd French traveler,Victoria Sandwich was probably something with cucumber and mayo – and spotted dick? Let’s not even go there. But hey, that’s why history is so much fun! Stacie Bakes is not just a good baking cookbook with a British twist. It’s a book with personality and I like that.

When I received my review copy of Stacie Bakes, I immediately flipped to the index and opened at page 95 – homemade pork pies with cheat’s piccalilli. I know, just writing it makes me hungry. It was that dish whose tantalizing smell was the last item to tickle my nose at the Stacie Stewart baking masterclass I attended recently. That’s how I came to know this book. I had to have that recipe.

You get the idea – seasonal celebrations and seasons, except like my 9-year old says “there’s nothing for Father’s Day!” but it’s true that Father’s Day rarely revolves around tea and cake. The sections make the recipes easy to browse since you can just flip to your desired season or celebration and check out the mouth-watering pics.

As a Sunderland born-and-raised family girl, Stacie infuses her with personality. It starts with a photo of her on a Vespa and a dedication: “For my grandma Ernie. 28 July 1930 – 9 October 2012. You made the worst fried breakfast in Sunderland but you could make a skateboard out of a hoover – nobody’s perfect!” And that’s pretty much the spirit of the book . Family-oriented with fun anecdotes of Stacie’s relatives – hi, Nana Jean! – the book offers comfort classics that won’t break the bank but still taste delicious.

Take the English muffins, they would be a perfect alternative to Sunday pancakes. The cheesecake Smartie glitter fudge brownies would have my girls begging on their knees. The Jules’ raspberry, rose and vanilla cake? I’ll have that for tea, thank you very much. The Chocasheek with a cornflake praline base and a chocolate ganache topping looks to die for – after a good hike as a reward. There’s also some good recipes for people with a savory tooth. Think spinach, ricotta and pine nut parcels or chicken and leek pie or even, cheese and leek scones (told ‘ya, scones). It’s not a whole lot, clearly Stacie has a sweet decadent tooth. However it’ll suffice if you have a craving for something hearty and salty.

What I love about the recipes is that for once, somebody clever thought about printing quantities both in metric and Imperial/US measures. Hey, just in case you have a scale and if not, it’s down to your cups set. Then you don’t have to be a baking god or goddess to succeed in the kitchen.

Some of the recipes my girls could make – like the shortbread heart lollipop (see the recipe here). It’s four basic pantry ingredients, four steps and a ton of hands-on fun. Others like the lemon meringue cake pie we made during the baking masterclass, well that would take more dedication but it’s totally doable. Most of the recipes, though, are just easy one-page modern takes on “classic puddings” such as the rhubarb tarte Tatin, the gold dust pecan fudge brownies, the super-simple summer pudding or the apple charlotte.

Now a whole new world of jazzed-up British baking can open up before your eyes – get ready!

Thanks to the publisher for sending me a review copy of the book. I like it very much and my lemon pie loving 9-year old too!