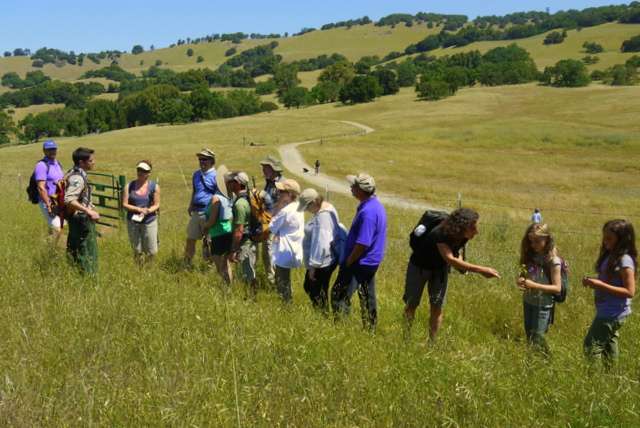 > Culinary Hike with the Kids on Mount Burdell

Culinary Hike with the Kids on Mount Burdell

Next time you go on a hike, stop anywhere on the trail and ask yourself: in an area like this, what do you got for food? Most likely you’ll blank like me and be glad you packed bunny graham crackers for the kids. Or if you’re ranger Charlie Schonwasser or culinary cowboy John Farais, you’ll start thinking recipes and health remedies right now – say, on the slopes of Mount Burdell in Marin county. For kids however, a culinary hike is an altogether different deal. It involves a spoonful of hiking, a pinch of listening, a shot of wild foods tasting, and a truckload of fence lizard-hunting at lunch break. In a few words, good country kid fun minus the plant taxonomy that’s left to the grown-ups. Here’s how it goes.

What is a culinary hike?

If you think that a culinary hike sounds like you’ll be foraging for mushrooms and sage and berries along the way – that’s your wildest midsummer night’s dream. The hike where you eat everything along the way is called a foraging walk and if I took my girls, I’d need to line their stomach with reinforced steel first because they tend to eat plants in great numbers on the trail. They have a sour tooth, that just can’t be helped. In a culinary hike (outside of Austria), there’s no beer drinking or bar hoping via mountain trails either. So forget that idea. Really, what is a culinary hike?

In the Marin County Open Space District version, a culinary hike involves a group of hikers following ranger Charlie and chef John, taking avid notes, learning to identify plants, pointing to other plants and in the end, tasting wild native plants foraged by John. Oh – and an impromptu potluck lunch in an oak tree grove with hay bales as seats.

Several weeks ago I received an email from my friend Ronnie with this hike description: “Get your hiking shoes on and your taste buds ready. Ranger Charlie Schonwasser leads this inaugural culinary hike on beautiful Mount Burdell, which is never prettier than in spring. We will talk about the local flora and fauna that Native Americans used for food.” Date: Saturday May 12, 2012. I replied “of course!”, signed up my gang and penned it on my wall calendar.

On Saturday morning, ranger Charlie welcomed a group of a dozen hikers at the trailhead of Mount Burdell. Ronnie brought her 8-year old girl, I my 6- and 8-year old girls. Without further ado, the girls started lizard-hunting while we listened to the introductions. John Farais was quite a character. Tall with a booming voice, he is a self-taught anthropologist and ethnobotanist, a personal chef who’s organized native foods meals, and a whiz at remembering scientific names of plants.

With ranger Charlie, they led us up Mount Burdell Fire Road and stopped in the shade of an oak tree, describing the landscape. On the opposite hill, big splotches of yellow-orange color indicated bushes of sticky monkey flowers – juice squeezed from the flowers was used by Native Americans to heal burns and skin irritations. Further afield, manzanita bushes, the Spanish little apple, lined the trail – manzanitas were a precious resource for Native Americans who picked them right off the bush, dried them for the winter, baked bread from smashed berries powder, or used the hardwood for utensils or pipes. You see where I’m going? A lot of plants you walk by hide a culinary or medicinal secret waiting to be unveiled.

Even as they described the natural resources we might encounter, both ranger Charlie and John Farais warned us against “enthusiastic” foraging. “We are several generations, if not centuries, removed from the foragers who did this for a living,” emphasized John. While these individuals were used to a wild foods diet, we are not and for our society, wild foods foraging is a sticky affair that only works with small dose trial and error.

A little further up the mountain, John pulled out a plastic bag with round black edibles inside – roasted California bay tree berries! They were deliciously addictive and tasted similar to roasted coffee beans with a hint of unsweetened cocoa. My 6-year old chocoholic took several of them and came back for more, as did I. I’d already tasted these berries right off the ground raw, but never roasted and thoroughly enjoyed the experiment. Actually I wish I had a secret stash at home. They’d be a great snack with my tea.

We left a left on Little Tank Pine Road and beyond a cattle gate – with cattle grazing nearby – we found creeping snowberry, a ground vine whose fuzzy white berries are poisonous yet were used as antiseptic by native Americans. A few feet away rose a skinny elderberry whose properties I loved to hear about. Besides the lemonade, cordial and other treats you can make out of it, elderberry trees grow where there’s water and are a good indicator of ground water in seemingly dry landscapes. A genuine drinking fountain in the wild – isn’t that something?

On and on we walked, uncovering the properties of many more plants while our girls picked flowers, concentrating on their flower and grass arrangement skills. After a mile of mild uphill hiking, we reached a wide clearing under ancient oak trees with a table awaiting our arrival – and a wild flower bouquet on the table cloth. That was such a nice surprise! The rangers had brought a big water cooler with paper cups and several hay bales were laid out around the clearing, creating a semi natural stage. Several of us pulled their potluck contribution out of the backpack, garnering a quinoa tabouleh, a barley, wild mushrooms and broccoli salad, venison sausages, venison jerky, venison chili and pecan chocolate brownies.

The best part of lunch didn’t come until the end John Farais gave us a culinary tour of his wild pantry and that, let me assure you, was something wild. Where are you ever going to go that someone offers you a taste of cattail pollen they’ve harvested themselves, or a whiff of holly leaf cherry powder (smells like marzipan), a handful of dried elderberries (think tiny raisins) or mesquite tree pod flour (a cinnamon/cocoa substitute)? Each new bag, jar or bottle opened up a world of wild foods experiment that I’d never considered before.

And then the interesting native foods finale that makes commercial sense. John is currently developing a native foods nutritious snack called indi-o. Because he uses somewhat rare ingredients, he cannot compete in price with big players such as Clif Bar or similar. Now if native Americans grew their ancestral native foods in quantities that would make the snack bar cost-efficient, then you’d have a profitable native foods agriculture business combined with a snack bar that doesn’t get more local and wild than that. Food for thought my friends, taking up native foods to a whole new mainstream level. I’ve always dreamed of being able to find local acorn flour in food stores – maybe that will happen one day?

That concluded our culinary hike and we went down the mountain looking for more lizards because let’s face it, blue-bellied lizards are great fun.

One thought on “Culinary Hike with the Kids on Mount Burdell”