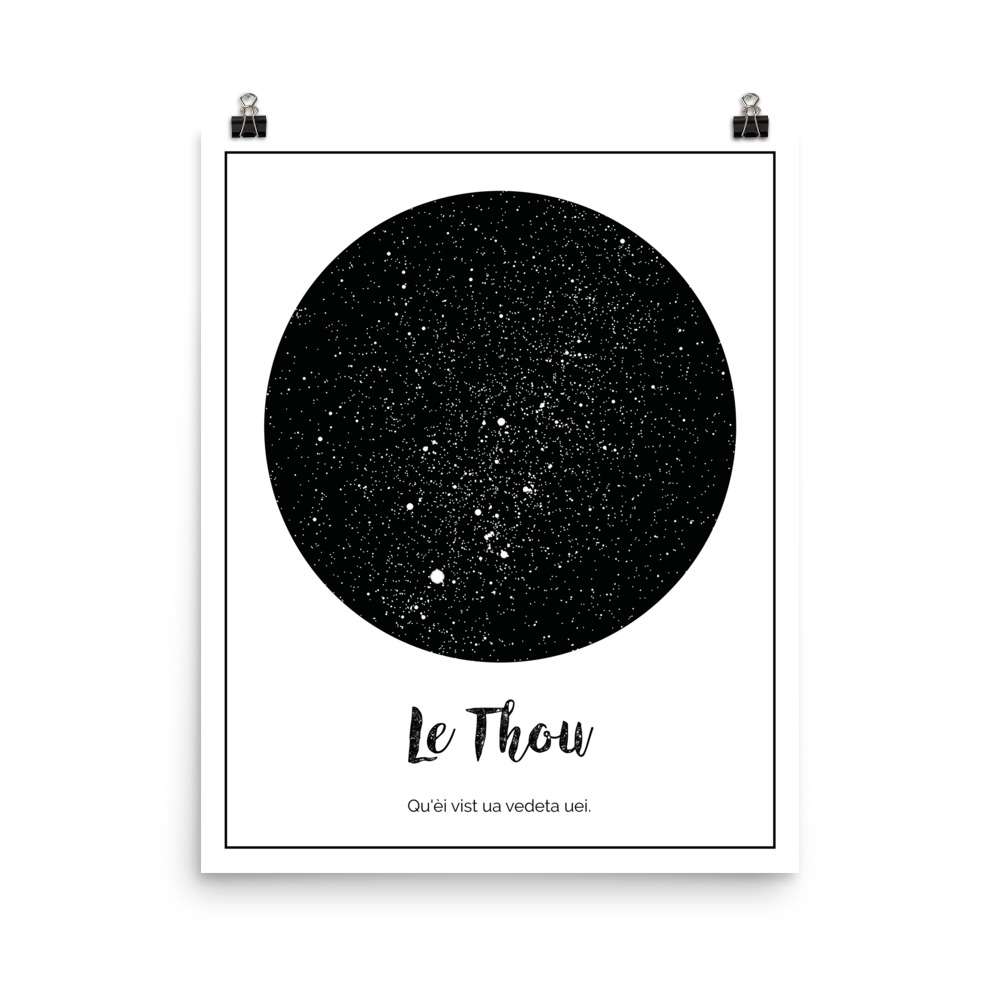 Two years ago, the mayor of the small city where my father lives in the South of France created a roundabout next to my dad’s house. It was surrounded by four powerful street lights. Along with it, a new road was paved through vineyards and more street lighting added. The result, apart from increased car traffic and loss of habitat for wild animals, was the loss of many stars in our night sky. We couldn’t see the Milky Way anymore. It was gone, as well as many shooting stars we used to see during the Perseids Meteor Showers. Light pollution had taken the night sky from us. This is why I love maps of the night sky so much. They show me what I cannot get where I live and they open up a world of space exploration. 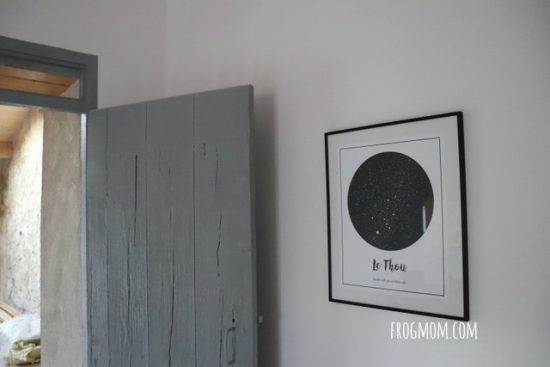 This is the star map representing the night sky that we don’t see anymore. It was created by Modern Map Art, a company that contacted me to review their custom star maps. I received a free star map made to my specifications in exchange for this review.

I’ll be honest, I’d never seen custom star maps before. I’d seen hundreds of gorgeous star maps in science or natural history museums, really nice posters printed on glossy paper, but they were all generic star maps. I had no clue which constellations I was looking at, where on Earth or in space the photo was taken or even when somebody pushed on the button. Not that it matters, but I like to connect with what I’m seeing. At certain times of the year, I expect to look up behind my dad’s house in the garden where it’s darkest and see familiar constellations. That’s why I was really intrigued by the concept of a custom star map.

With a custom star map, you can specify many things, including:

You can also add a title to your poster, a message, pick the type of poster (with constellations linked or without, with or without borders), as well as the font. Modern Map Art takes it from there.

How a Custom Star Map is Created

Jennifer, the person who contacted me, was very patient during the whole process as I kept forgetting things or delayed getting back to her. On the website, she explains how they create custom star maps:

“We use astronomical software used by planetariums that generates the actual night sky at a particular time and place. It looks exactly what you would see with your eyes, binoculars, or a telescope. We use a database with hundreds of thousands of stars. With our software, you’ll be able to create a one-of-a-kind print that shows off a special moment in your life — when a child was born, when you said “I Do”, when you got engaged, or any other memorable time. We print on both paper and canvas depending on what you’d like to have on your wall.”

So there. My custom star map was going to reflect the night sky on the day that I had specified in a place that I loved.

This is what I picked for my custom star map.

I picked August 8, 2017, because August 8 coincides roughly with the peak of Perseid meteor showers. In the South of France near Béziers, they are one of the highlights of the summer and with my family, we sit on a swing in the garden or away from the house to count shooting stars from 10pm onwards. It’s a time of the year when we are out late because the temperature is warm and we are rather carefree, enjoying local red wine and seasonal produce. I’d say, August 8 is a very relaxing date for me.

I picked the sky above my dad’s house near Béziers, which is my father’s hometown. 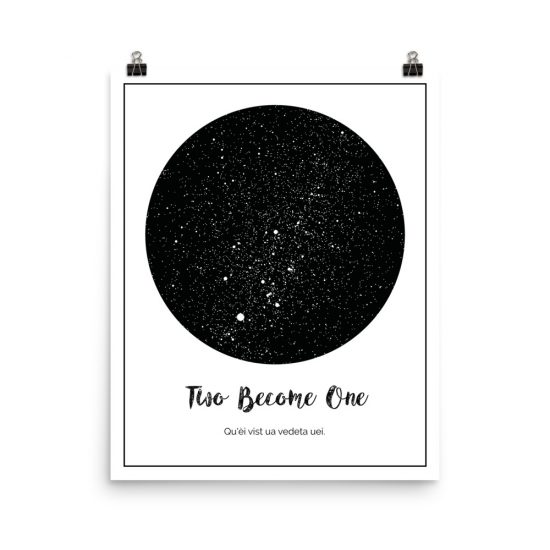 Initially, I didn’t realize I could pick a custom title and the first mockup came with a standard title Two Become One. When I realized my mistake, I picked Le Thou, the name of the house in the South of France. Pronounced “Too” (and not thou, as in English), it has a special meaning. The first building at that location dates back to the 16th century near a Roman aquaduct, which resulted in the place being called ‘Toa.’ It is Occitan language for waterway. The aquaduct supplied local Roman villas and villages with fresh water. Over time, Toa was distorted into Thou and there you have it, it’s now called Le Thou. Because hey, everything sounds better in French with ‘le’ in front.

Jennifer sent me another mockup with the right title. 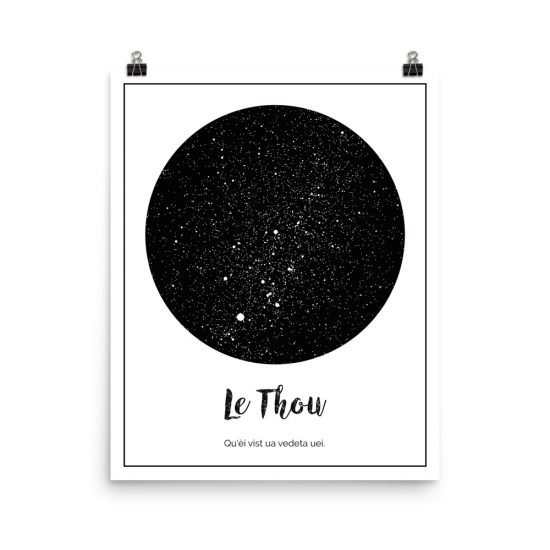 This was looking great. 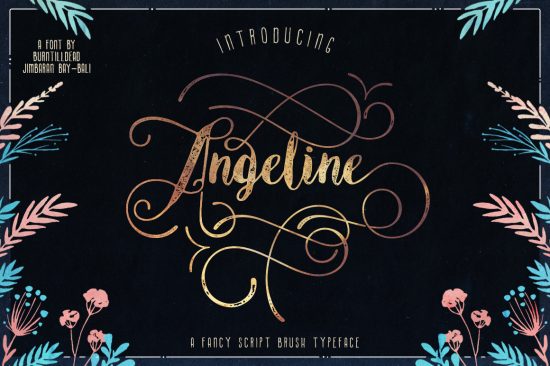 For the title, I went with Angeline Vintage, a whimsical typefont that goes perfectly with my idea of a night sky. For the message, I went with Raleway Regular, a more sober and modern typefont.

I wanted the message to reflect a sense of place, so I used Google Translate from French to Occitan and the poster says ‘Qu’èi vist ua vedeta uei.’ It means “I have seen a star today’ in Occitan. Rather fitting for this tiny village in Occitanie.

Not that I speak any Occitan, but my dad grew up speaking it with his aunt when he visited her in the foothills of the Pyrenees.

The Custom Star Map on Site

After I’d filled in all the details, Jennifer shipped the poster in a poster shipping tube to France, where the poster was framed. When I unrolled it from the tube, I found out that it was quite big! And square too, which I hadn’t really thought about either. To frame it, we recycled a frame with an old poster and hung the framed star map in the kitchen. Check this out! 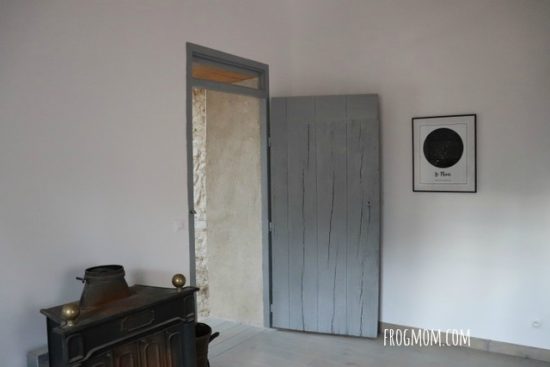 The house is not finished yet but when it will be, the star map will be between a wood stove and a door that closed a wine cellar. It’s in the room where villagers used to come, a century ago, to bake their bread in a massive communal wood-fired bread oven. The bread over exits no more but a half-moon shape in the wall shows where it would have been.

I am really grateful to Jennifer for suggesting this custom star map because I would never have thought about this type of idea and it is a really lovely decoration item that belongs nowhere else.

If you are thinking of ordering a similar custom star map for someone (or somewhere) special, it’s very easy. The order page is a series of dropdown menus and with interactive mockups, you see exactly what you are getting. Customer service and speed of delivery have been great and my overall experience with Modern Map Art was nothing but positive.

As we say in the South of France, in this mysterious Occitan language that I cannot comprehend…