Veganuary Day 21: 30 Days of Vegan to Save the Planet

This is Day 21 of Veganuary, a 30-day pledge to eat vegan to save the planet. Today, I report on skin health during Veganuary, the challenges of eating out and opera.

Why isn’t Nutella vegan? It’s everywhere in the news, France saw riots in supermarkets this week because of super-discounted Nutella deals. Now, I grew up on an island far from France which means that I don’t like a lot of typically French foods. However, I really like Nutella (which isn’t French, I know) but Nutella is bizarrely part of the French genetic code.All French school kids snack on Nutella after school or have it at breakfast. In fact, I’ll let you in on a terrible secret–I eat Nutella with butter on toast. I know. Criminal, sorry not sorry. My husband used to eat Nutella jars by the tablespoon full and hide them under his bed as a teen. My 12-year-old swears by Nutella on toast and crepes. Only my 14-year-old seems to be an improved version of us as she’s not crazy for Nutella but I’m wondering if she’ll develop the taste later. Maybe not. She’s a peanut butter girl.

All this preamble is for breakfast of course, as I try what I hope to be a good Nutella substitute. Hello, Pip & Nut Chocolate Coconut Hazelnut Butter. 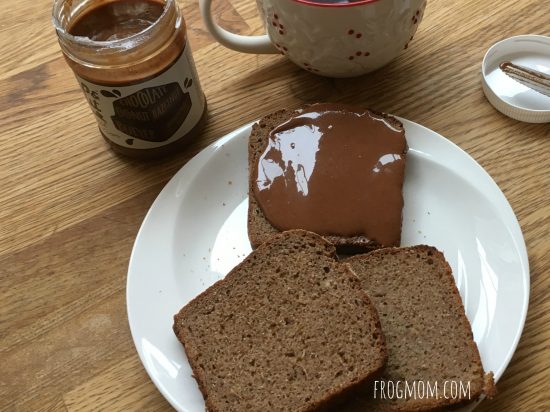 As the label recommends, I stir the spread so the separated oil comes back in the fold and the mixture is smooth. Then I spread it on rye bread and taste. Bleh. It’s not pleasant at all. I mean, it’s a weird texture, oddly dry in the mout and it’s not nearly sweet enough for my tastebuds, which must be because it’s sweetened with agave syrup.

This is not going to replace Nutella anytime soon, that’s for sure, but maybe I’ll try to make my own vegan Nutella if I find a good recipe.

Today is the first time that my face skin looks notably clearer than usual and it’s very pleasant. My husband notices this morning, so I go to check in a mirror. Aha, it does look better. So the rumors are true? It’s no secret that what you eat impacts your skin and vegan diets have a reputation for resulting in clearer skin. However, I did not think it would be a) so quick and b) so visible. In a nutshell, my complexion is clearer and brighter than it used to be. For the past 14 years, I’ve suffered from rosacea, a skin condition that manifests itself as redness and small dilated blood vessels on the face. It flares up with certain types of food, alcohol or weather.

Recently, it’s been much better. The combination of Dry January with Veganuary clearly makes a difference for my skin, but it’s hard to tell how much of it is Dry January and how much is Veganuary or whether I’m just being lucky. For the anecdote, I’m not the only who’s noticed a change in our household. My 14-year-old has noticed an improvement of her acne since I’ve started Veganuary. While she eats omnivore at school, she eats vegan with us at home. Of course, she’s very happy about this and though she loves meat, she realizes that a healthy diet can impact her skin health and if it’s her only takeaway from Veganuary, I think that it’s quite a big deal at her age.

I’ll be discussing other health issues before the end of Veganuary but in the meantime, you may want to do your own research on health and diets from independent sources, meaning neither from vegan nor from dairy lobbies (too much propaganda and fact-twisting on both sides). I find that Mayo Clinic, Harvard Health, the Australian Health Direct or the British NHS have a sensible and cautious approach to the topic.

Today we walk to the Victoria & Albert Museum for an exhibition on opera and stop at one of our favorite local restaurants, The Dragon Palace on Earls Court. We love their lunchtime dim sum menu but I’m a bit afraid of what that means in terms of Veganuary. After scanning the whole menu, I come to the conclusion that the only vaguely vegan item is chow mein with vegetables. There’s also a spinach and mushroom dumpling that seems vegan so we order a few of those. All the rest has meat. Literally, everything. It’s depressing. 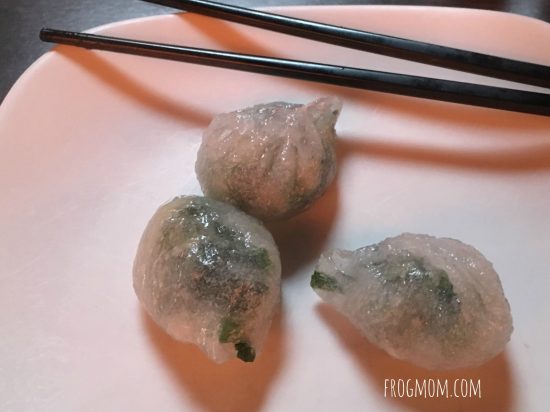 Item #1: spinach and mushroom dumplings. Very chewy, they look and taste vegan to me but they’re bland. Verdict: not convinced. 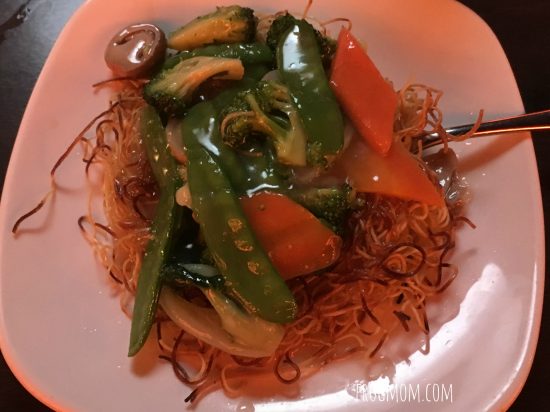 Item #2: crispy chow mein with vegetables. What’s that weird goo on the veggies? I single one or two clear blobs of jelly and push them on the sides. Out of my food, weird jelly. Verdict: thou shalt not pass the gates of vegan paradise, mediocre chow mein, not on my watch. I’m disappointed because we usually like this restaurant but today’s a big vegan let down.

I need something sweet to make up for this lunch. What’s around the V&A? 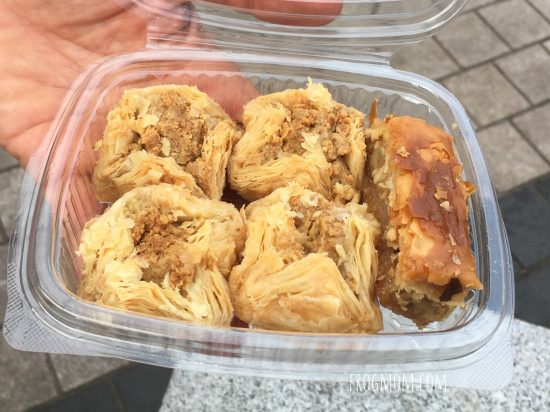 Comptoir Libanais! They must have nut pastries that are going to be great. A few minutes later, I have two of these wonderful oriental pastries and on first bite, I realize that they’re made with butter, not oil as I had hoped. They’re delicious but I was really hoping that they would be vegan. As a sidenote, the Comptoir Libanais website has a great filter that you can use to find out all the vegan options in their menu. Clever, that. Guess I should have used it beforehand.

Opera Exhibition at the V&A 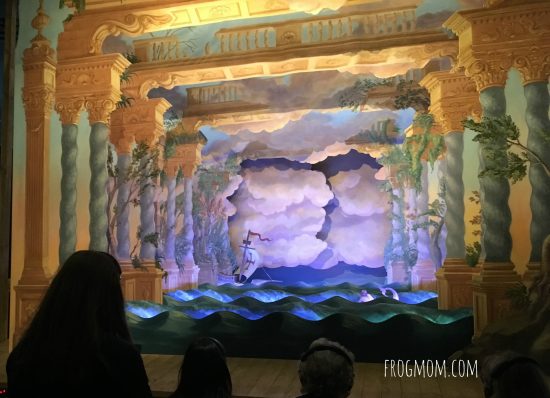 You have until February 25, 2018 to see the Royal Opera House and V&A exhibition on opera. It’s a really interesting journey through the history of opera over 400 years, from 17th century Venice to 21st century San Francisco, with a highlight on 7 ground-breaking operas. Interestingly, your headphones know exactly where you are in the exhibition, changing sound recordings automatically as you move around. My girls really enjoy it and so do I, though I would have loved more sets and costumes as eye candy. 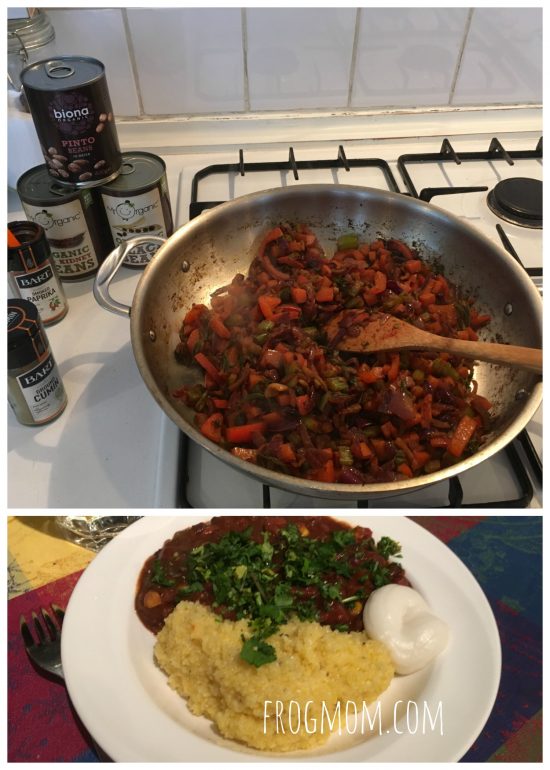 The chili includes red onions, celery, carrots, ground cumin and smoked paprika, beans (pinto, black and red kidney beans), chipotle, dark chocolate and canned corn. We served it with a vegan polenta, chopped coriander and green onions. While my family ate sour cream, I experimented with rice cream, the off-white swirl on the right side of the plate. It is made with rice, water, oil and locust bean gum.

One of my daughters, when I rad the ingredients out loud, understands locust bin gum and can’t make any sense of that. The other one focuses on the word locust and is disgusted that people would go as far as to remove the gum of locusts to make rice cream. I need to clarify that locust bean is just a type of bean! As for the rice cream, and unsurprisingly, it tastes like… boiled rice. It is nothing like cream apart maybe from the color and vaguely, the texture. The chili was great but the rice cream not a big success. Won’t be using it again. 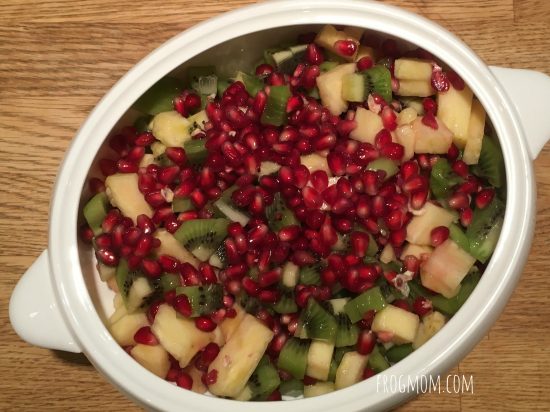