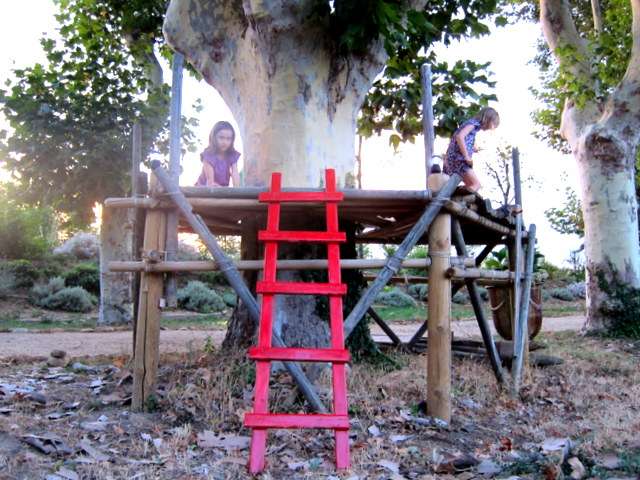 To check whether a can of spray paint is full, do not puncture the top with a nail. It sounds like a grand idea, fun with nails and all, but no. It will firework up your face. I swear it will. You will spend two days removing paint spots between your neck and forehead. Scrubbing hard. Since I found out there is an easier way to do this, let me tell you about a kid-friendly DIY project that you can complete in half a day: the 5-step treehouse ladder.

Last year we built an elevated platform around a sycamore tree as a treehouse for my girls and my brother’s kids. We thought it’d be a hit but after completion, my girls didn’t show much interest and my niece and nephew were too short to climb up. Drats, a big old treehouse flop. Last week as a 9-year old friend was visiting, I thought a treehouse-project was just the thing to re-ignite a treehouse spark. “Let’s make a ladder for your treehouse!” I said. They looked at me, “Really?” Really. It was 1pm and I’d noticed weathered wood planks around my dad’s yard. The same evening, the girls had dinner al fresco in their treehouse and used the newly-made ladder to bring all the supplies up to the platform. Success! Here is how I made it, the easiest project you’ll ever find from someone who’s really not skilled with tools.

Skill level: you must be able to hammer a nail without smashing your fingers and saw wood planks while keeping your toes

What I used to build a 6-foot ladder with 5 steps:

First I laid out two pieces of wood parallel, about 11 inches apart. Seemed like a good distance for 2nd grader hands. Then I guesstimated how far apart the steps should be. Initially I thought 4 steps would be enough but I asked the girls (laying out sticks) and they said, “too far” so we added another step. That made 5.

I drew lines every 19″1/2 with the marker on two pieces of wood to end up with my 5 steps (one extra step, not used in this project). Since I didn’t have a sawhorse, I just put down the piece of wood over a bench, stepped on one end and sawed with the other. When the  wood was getting too jittery, I asked the girls to take turns sitting on the end I wasn’t sawing. They actually enjoyed the “butt massage” very much and sawing everything took less than 20 minutes. There, we had 5 steps. We spaced them evenly on the 2 parallel pieces of wood to visualize the ladder. It looked fine. The steps were 11 inches apart starting 8 inches from both ends.

That’s when I realized my dad didn’t have the right nails nor any water-based paint in his toolbox so I zipped to the closest hardware store to buy the remaining supplies.

Everybody makes home projects in the summer. Everybody around that hardware store. I don’t know that store, the signage is very confusing. It took me forever to find the right nails, the spray paint, check it was water-soluble and get in line to pay.

Back home, I had asked the girls to sand all the ends of the wood pieces so they would be smooth enough for them. Each of the girls tried, from age 7 to 9. I showed them how, they took turns and by the time I got back from my trip to hardware store hell, the ladder was ready to be assembled. No shards sticking out.

The girls were dying to use a hammer but I convinced them it would be easier for everybody if I nailed the outside steps myself, then they could play around on the inside steps. For better stability I fixed each step with 4 nails on the support planks. First my dad handed me a small claw hammer but I realized I missed more often than I liked so I grabbed a bigger hammer and got much better results.

Eight nails later, the girls took hold of the hammer. Since the wood was kinda hard, I hammered each nail half-way in and they did the rest. They loved it!They missed a lot too but I showed them how to hold the end of the hammer and get better result without getting tired.

Sometimes I finished up the nails myself and asked the girls to step on the ladder so it would be more stable for me. Nailing took about an hour. The ladder was now assembled. Painting time!

My dad had made it clear, “no big paint stains everywhere.” Which is why I decided to do this project in an old cellar. To avoid paint dripping everywhere and the hassle of painting one side, then the other, I decided to hang the ladder to wood beams so I could spray paint both sides in one “sitting.” It worked!

That’s when I punctured the can of spray paint with a nail. Because you see, some spray paint cans have a plastic ring inside preventing accidental spraying. If you’ve never seen one, you might not notice it and use a nail to check it. Not a smart idea. When they saw my face all white with primer, the girls looked stunned and when I looked stunned too (not hurt), they literally fell on their bottom laughing. “Mom, what have you done?” Such is the price of ignorance. Put the nail away and remove the plastic ring. That’s how spray paints work.

Armed with the can of spray paint, the girls were delighted to take turns around the ladder. It looked like the air was full of white sparkles! But God it stank. I opened the doors wide. I wouldn’t say the girls used the paint efficiently but they had a ball doing the first layer. It stank too much though, so I sent them outside and took over to finish off.

I didn’t have enough paint left in the can for a second layer of primer so I hoped it would be enough and let it dry 30 minutes. Since I wanted a better coating of red, I did the 2 layers of red paint myself and let them dry 20 minutes each.

Dinner in the Treehouse!

It was now twilight. “Dinnertime!” I yelled, and the girls came off the swing. They prepared baskets of food in the kitchen, added an electric lantern and a water bottle, and marched over to the treehouse where the ladder was waiting for them. “It’s so red!” they yelped, delighted. Yes, it was red indeed. They went up the ladder and appreciated how smooth it was. And so for the first time since the treehouse had been completed, they had dinner al fresco in the treehouse, listening to crickets and watching the stars.