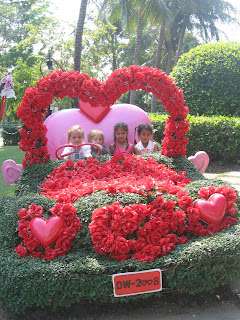 > DreamWorld: The World of Happiness

DreamWorld: The World of Happiness 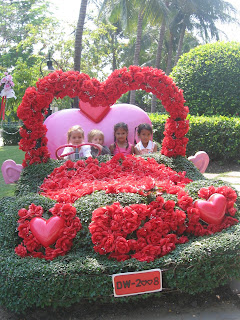 Want a theme park fix and cant fly to Anaheim or Tokyo? Bangkok boasts two major amusement parks, the aging Siam Park and the more recent Dream World. Both are located an hour away from Bangkok and while Siam Park is known for its water park, Dream World heavily advertises its Snow Town, a climate-controlled warehouse with snow slides and Christmas tunes breaking your ears. Snow-deprived Thai people love it.
I remember going to Siam Park as a teenager and loving it. The water park, the unavoidable sun burn, the scary roller coaster, it was great. I also remember looking at a big ride with metallic cages taking you around a big wheel. We all knew it was a third-hand ride and rumor had it it killed two people when their gates sprung open at the highest point of the ride. Siam Park unfortunately has a sad record of accidents killing or injuring children and I would not feel comfortable going on the high rides there.
We chose to go to Dream World instead, if only because I’d never been and wanted to check it out. It’s divided into four different areas with alluring names such a Dream Garden, Fantasy Land, Adventure Land and Dream World Plaza. While it’s nowhere near as professional as Disneyland, it’s still good fun in pleasantly landscaped gardens.

Foreigners get to buy an all-rides-included ticket at 450 Baht ($15) per person above 90 cm, while Thai people pay by the ride (discrepancies in prices according to Thai/non-Thai are very common in Thailand). We started out strolling in the cutesy Fairy Tales Land, a garden with stucco replicas of storybook landmarks, most including automated wax figures. As much as it was fun to see the seven dwarves snoring in their beds in the little thatched house and an old woman knitting in a giant shoe, it was creepy watching poor Hansel and Gretel behind bars while the witch was rolling dough in her gingerbread cottage. We moved on to a house inspired by Jack and the Beanstalk called the Giant House. It had oversized furniture and the giant snoring on a giant bed and scary sounds that totally spooked both my girls. “Out!” they screamed. And out we went.

We went on to the Adventure Land part of the park, passing by two elephants whose feet were chained and seemed to be readied for elephant rides and banana feedings. My girls hardly paid attention to the elephants, lured by a commercial mall of flashy stuffed Kitty K 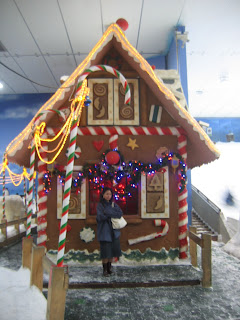 ats and other tasteful memorabilia. Right after a small petting farm called Uncle Tom’s Farm (with a small goat on leash outside the fence for everyone’s petting desires), I tried to go to the Haunted Mansion with one of my girls. The first one chickened out before we even went in and the second one didn’t make it past the first room. To her credit, I have to admit it was rather scary. In typical Thai fashion, safety concerns are low on the list of priority so the room was hardly lit at all and a light garland was supposed to lead the visitor up carpeted stairs with candelabras going on and of and ghostly sounds filling the room. Perfect for Halloween but thank you no. We much preferred the Bumping Boats ride, a water version of bumping cars on a small lake. Right behind that, a big sign awaited us. “Snow Town”. I just couldn’t resist.
First off, you trade your shoes for rubber boots in the same size. Then you receive a padded jacket and once properly dressed, you’re allowed in that big freezer. It’s minus 6 degrees Celsius in there. I don’t know what’s most outlandish in Snow Town. Is it the plaster igloo? The Christmas lights and Jingle Bells in March? or the Swiss mountains painted on the walls looking on the w 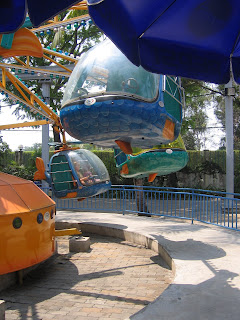 hite and icy sliding hill? Hard to tell. Regardless, Thai people seem to love it. We were getting cold in our thin rubber boots so we exited shivering. “Is it that cold in America?” asked Pi Thawin who was accompanying us. Colder sometimes, I replied. He raised his eyebrows and shook his head in disbelief.
The far end of the park was much more appropriate to my little girls’ adventure thirst than the early rides. Between flying spaceships in Thunder Bird, little boats floating down a blue stream in a plastic tube called Indian Boat, flying helicopter-fish called Flying Fish and small cars going around on a raised track called Monza, it’s the real preschooler part of Dream World. 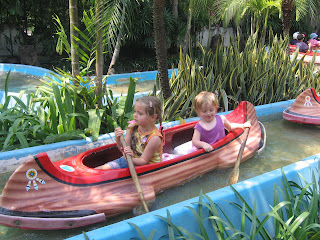 My girls had a blast paddling on their boats and flying in their fishes, asking for seconds and thirds every time.

The other thing they really enjoyed in that area was watching the big round rafts of the Grand Canyon ride rushing down white waters with their occupants being splashed from head to toe. It was a lot of fun. By then, my girls were getting tired and it was time to retreat.

I stopped to buy some fresh guavas and watermelon on the way back and when I turned around, there was a dozen people surrounding my little one’s stroller and posing for pictures around her. With her fair complexion and strawberry blond hair, Thai people call her “little doll” and she’s usually a squeaking young women’s magnet. In the meantime, a basketball game keeper had “adopted” my oldest one and kept handing balls to her during a good twenty minutes, helping her to score here and there. A last jump on the Cable Car soaring high above the park, a go at Racing Car for my girls and we ent back home. What a day!