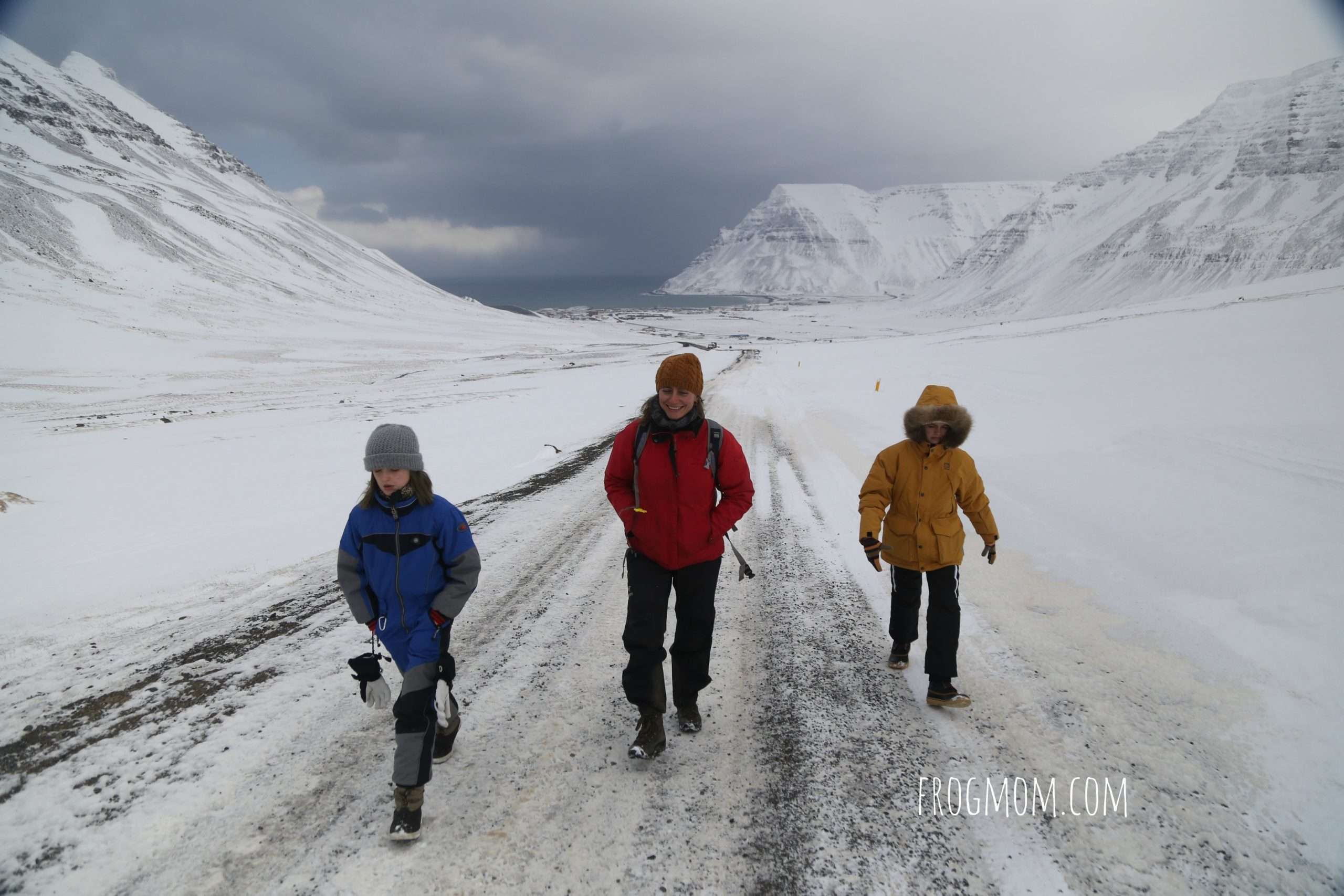 > Easter in Iceland with Kids

Easter in Iceland with Kids

What’s so special about Easter in Iceland? Initially, I didn’t think of Iceland as a particularly religious country and booked tickets to visit Iceland with my family around the Easter holiday. When planning our itinerary, I discovered that Easter in Iceland is a five-day holiday from Wednesday evening before Easter until Monday night after Easter. Quite literally, the whole country shuts down during 5 days, restaurants, shops, etc. Well, almost the whole country. A small city in the Westfjords throws a massive free music music festival and that’s exactly where we went for an Icelandic Easter experience. 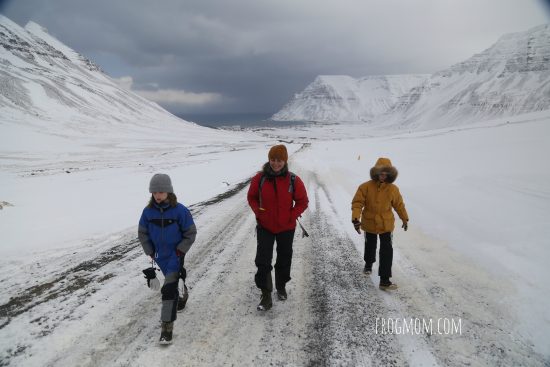 If you live in a country where Easter rhymes with bunny crafts and egg hunts, you probably think that it can’t be that bad in Iceland. To be fair, I wasn’t sure what to expect but we arrived on Good Friday in the morning and I didn’t want to take any chances. To be on the safe side, we headed to a supermarket right after we landed in Keflavik (Reykjavik’s airport) to shop for groceries. It was closed. Two other supermarkets were closed as well. 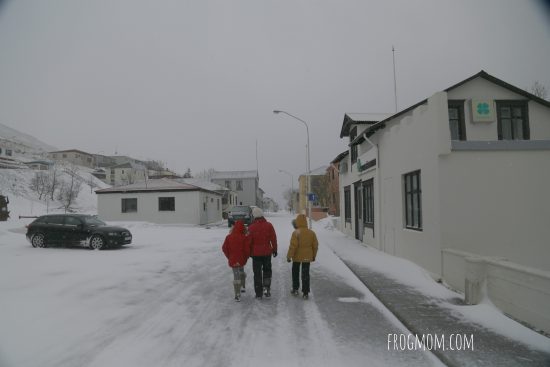 In fact, city streets and roads were largely empty. Clearly, everybody was back home to celebrate. The only place that was open was the 66 North outlet in Reykjavik, 66 North being my favorite outdoor apparel brand. There, we stocked up on same amazing deals in terms of winter jackets, winter hats and gloves, before deciding that it was time to hit the road. Still, no food.

Dining Out in Ísafjörður

Five hours and a blizzard later, we arrived in Ísafjörður, the crown jewel of the Westfjords region. We had found a small diner for lunch in a parking lot and had a restaurant reservation for dinner at Húsið, a charming cafe on the harbor. 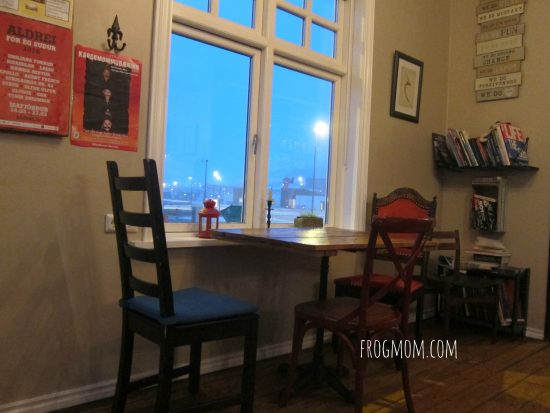 Dinner was great and homey, well executed comfort food such as pizza, pasta and fresh beer. Looking out the window on the snowy harbor, we felt very much at home and spend a great evening. The following nights, we went to the most famous fish restaurant in Iceland, Tjoruhusid. We still needed to buy groceries, though.

Because Ísafjörður is technically the only city open for business over Easter in Iceland, most shops were open. The morning after we arrived, we hit the local supermarket. I don’t remember its name, but they had the most amazing selection of yarn. 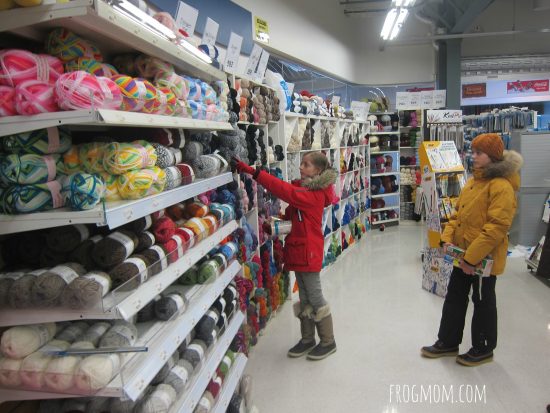 May I point out that this was a regular supermarket, not a knitting shop, not a wool center. Isn’t this yarn display crazy? My mother-in-law is an avid knitter and we spent a few minutes choosing yarn balls for her. If you haven’t heard, knitting is the national past-time in Iceland. 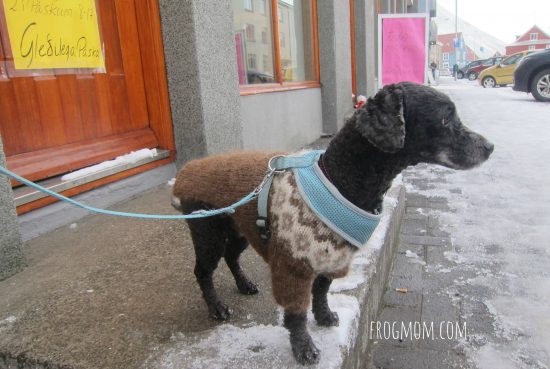 This is the country where even dogs get their own regionally-accurate Icelandic patterned sweater. Boys and girls learn to knit at school and knitting circles are the equivalent of country socials. Knitting is really big. 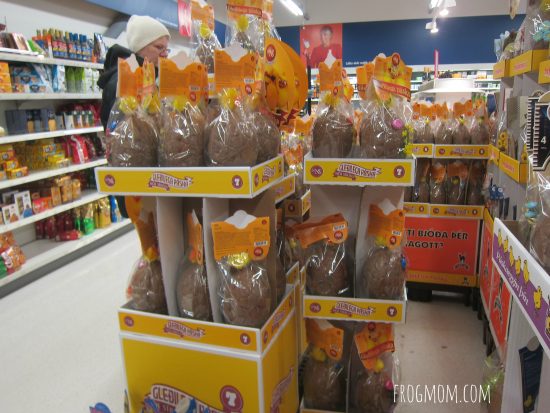 More in tune with the season, this supermarket and most gas station shops or corner stores we’ve seen had a massive display of Icelandic Easter eggs. More on that later. Obviously, the supermarket also had fresh food and the best selection I’ve ever seen of cod liver oil, neatly arranged in the refrigerated aisle.

If you’re looking for fresh bread and not industrial bread, bakeries are your best bet and we crossed the street to the bakery. 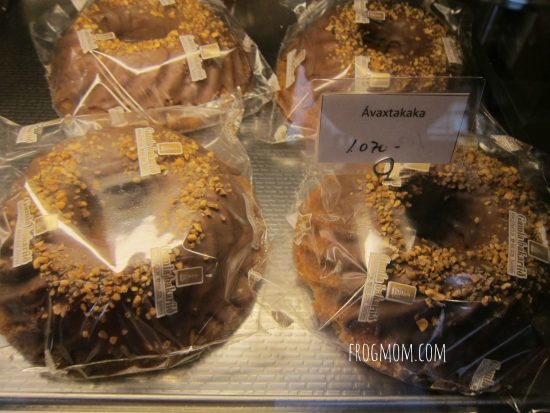 In the window, I spotted these beautiful eastern cakes with milk chocolate icing and crumbled nuts. Though we refrained, afraid that we would never be able to finish it, we were very intrigued.

Next on the agenda: thermal springs.

If there’s one thing that you can rely on in Iceland, apart from the occasional whiteout and blizzard, it’s hot springs and thermal pools in almost every village. 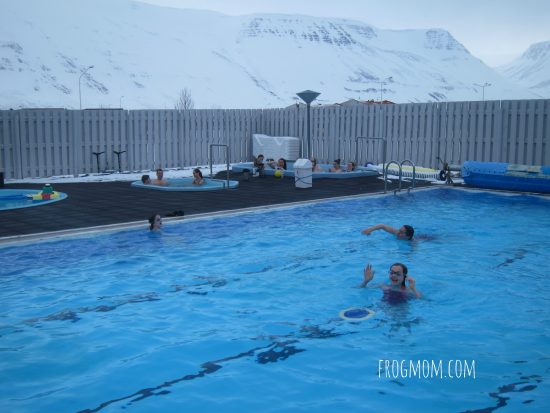 The day before Easter, we spent a whole morning at the public swimming pool of Suðureyri, a small fishing village with 312 inhabitants. As befits a village of this size, the swimming pool has an open air 25-m pool as well as 3 hot tubs of varying temperatures and one sauna, all heated with local geothermal energy. That’s Iceland for you. The country of fire and ice. The moral of the story is: always bring your swimming costume, even if it’s freezing outside.

Fashion Show & Rock Concert at the Swimming Pool in Suðureyri

We were lucky in that the year we visited, 2016, the brand 66 North was celebrating a very special anniversary in Suðureyri – 90 years of existence. To celebrate in style, the festivities were to start with a fashion show at the swimming pool. Say again? Yes, I had a hard time wrapping my head around the concept but apparently, the idea was that we were going to be swimming in the outdoor heated pool while models walked around the swimming pool in 66 North gear. Sounded a total hoot. 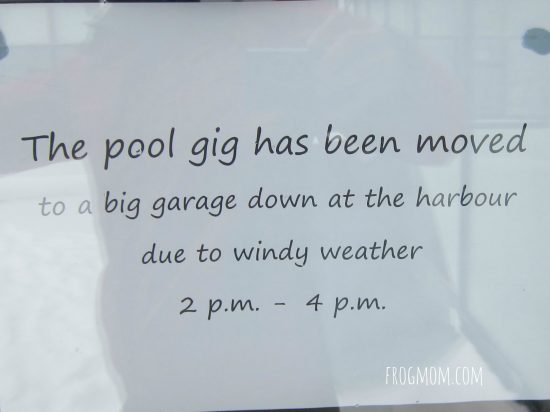 There went the weather again. Highly unpredictable. Gale force winds were blasting snow on the harbor so yes, a fashion show would have been tricky. We made our way to the garage down at the harbor. 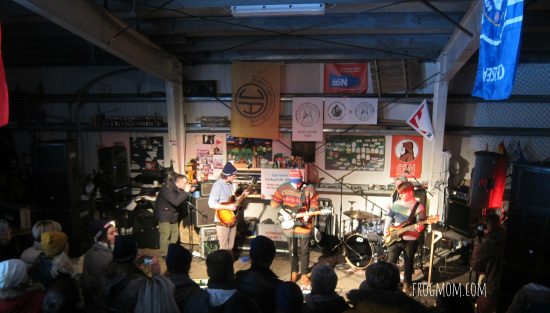 The fashion show was over but we stayed to listen to five local rock bands. I took this picture from a boat inside the hangar as this was a fishing hangar, and enjoyed looking at the fishing nets, buoys and boxes pushed aside to make space for music stage. Unbelievable. 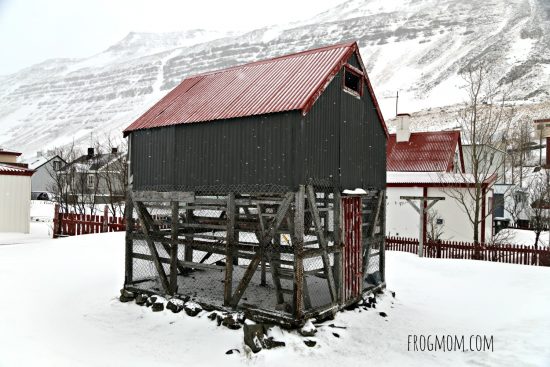 Outside in the harbor, a few fish drying huts were ready to host the catch of the day to turn it into tasty fish snacks that Icelanders love. I saw a pregnant woman at the concert go down a full pack of dried fish like it was potato chips.

We are a Catholic family and Easter is one of the two yearly services we attend, the other one being Christmas. On Easter morning, we headed to the only Catholic church of Ísafjörður, St John’s Chapel. Little did we know that the only Catholic community of the Westfjords is Polish. And so we attended a full Easter service in Polish, after a short introduction in English and Icelandic.

Needless to say, our girls huffed and puffed and we didn’t understand a thing.

I promised that I would come back to Icelandic Easter eggs because they are truly special and very different from Easter eggs I’ve seen in the UK, US or France. In a few words: 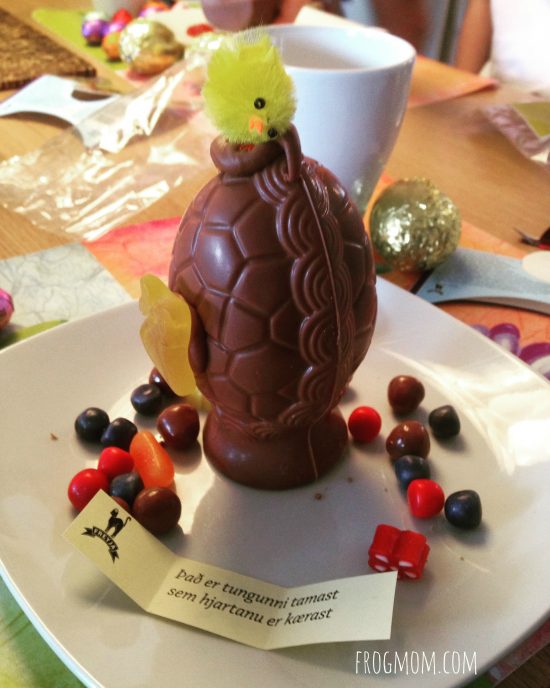 Bolungarvík is the northernmost village in the Westfjords, situated on an eponymous cove. After Easter lunch, we decided to go for a hike to walk off the meal but what with the heavy snowpack, most roads were cut off. Fortunately, nearby fishing village Bolungarvik was accessible via a mind-boggling 5-km long tunnel with, hold on to your chair, a traffic light and a cross-section in the middle. Never seen anything like it.

We started in the hike in the direction of Bolafjall Mountain but the trail was too snowed in and we stopped at a cairn before the pass for hot chocolate in tin cups. It was freezing and we didn’t linger, happy to return to the car with the wind in our back. 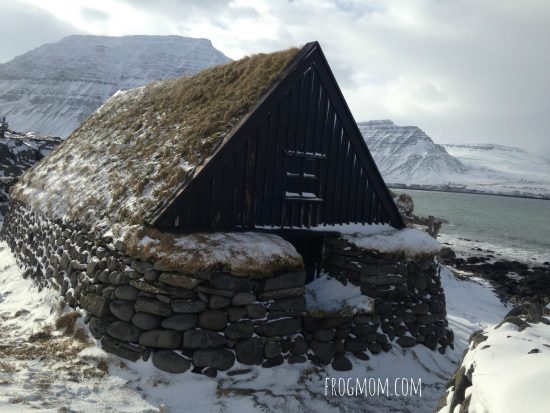 The Ósvör museum, a fascinating replica of an old fishing outpost, was our next stop towards Ísafjörður and though the museum houses were closed, we got close to the windows and peeked inside through the thick glass, wondering what kind of life fishermen of old led in this blasted weather.

Easter in Ísafjörður wouldn’t be complete without its annual Aldrei fór ég suður (“I never went south,” in English) festival. It started off in 2004 as a crazy idea by a local artist and his father, the local harbor master. They meant to bring together the best of Icelandic music scene with local bands and musicians. We couldn’t wait to bring our girls to their first music festival, albeit one where they wouldn’t know any artists. Never mind that. The atmosphere was fantastic. 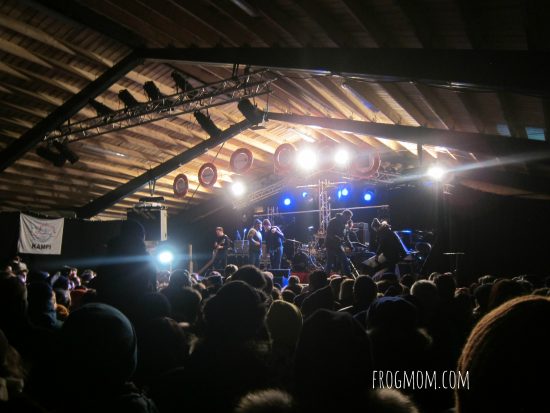 Taking place in one of the fishing hangars in the harbor, definitely the it-place for music festivals, the event was free to attend and packed! Headlining were a mix of big international names as well as local bands, everybody performing as equals on the stage. People were freely coming in or going out, most enjoying pints of beer and listening to the music or discussing. It was all very PG-rated and our girls loved it. In fact, there were quite a few other kids in the hangar despite the late hour and I took it as a sign that the festival was family-friendly. It was also the biggest concentration of Icelandic sweaters ever, half of the festival goers wearing their sweater, probably knitted at home headbanging to some local heavy metal band.

In hindsight, visiting Iceland in Easter was a blast. Had we followed the advice posted on Frommer’s and Lonely Planet, we would never have attended these events where mostly locals go, nor enjoyed a music festival in a fishing hangar. If travel is about opening your horizons, Easter in Iceland is for you.