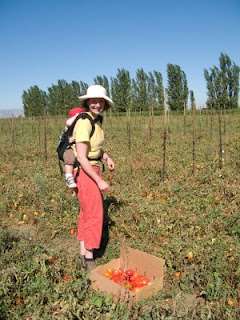 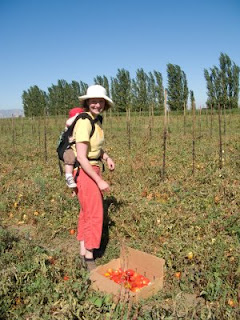 My friend Heather Knape is a Bay Area photographer. She is also an epicurian and adventurous foodie.

Her series on tomatoes once decorated the walls of San Francisco’s Millenium restaurant. For that series, she frequently visited Eatwell Farm and soon befriended Nigel Walker, the farmer at Eatwell.

When she offered me to join her to visit Eatwell Farm recently, I asked what for. “Why, to pick tomatoes of course!” My husband and I had just canned 52 pints and 7 quarts of Roma tomatoes the previous weekend.

You’d think we’d peeled and seen enough tomatoes for the remainder of the season. But picking fresh organic tomatoes right of the vine sounded too tempting an offer to pass. Late September is the perfect time to enjoy the last glory days of tomatoes.

On a Tuesday morning, Heather and I packed our little crew, met up with our friend Esther and drove to Dixon in the Sacramento Valley. More than picking tomatoes, I was eager to get my girls out on the farm, to have them interact with the real thing.

Nigel greeted us by the produce-packing buildings and got on his bicycle to show us the way. We grabbed a handful of empty boxes and 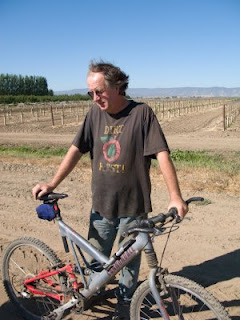 proceeded down the dusty road.

It seemed so dry that I couldn’t help asking where the irrigating water came from. “From Lake Berryessa over that hill,” said Nigel pointing at two hills on the horizon.

Soon we were walking alongside the squash fields and reached the tomatoes. Now, I’m loosely referring to “the tomatoes” but the truth is, Eatwell Farm is notorious for its “Tomato Wonderland” and produces dozens of heirloom/non-heirloom tomato varieties.

As Nigel needed to tend the farm (we came on a Tuesday and Tuesdays are CSA-packing days at Eatwell Farm), his time was limited. We got a quick rundown from him: here the Romas, further Cherry tomatoes, across the road Green Zebras, towards the chicken coops, yellow tomatoes.

While we were trying to memorize locations, Nigel kneeled down and showed us how to look for tomatoes under the leaves. “Just rub them with your fingers,” he said. “They’ll have dirt on them and maybe sunburns, but they are good to eat. See?” Since he was graciously allowing us on his tomato fields during regular farm hours, we were only too happy to nod.

Following his example, we all got down to business. As down as down can get, feet and hands in the dirt. Heather carried her 16-month old in a carrier on her back but 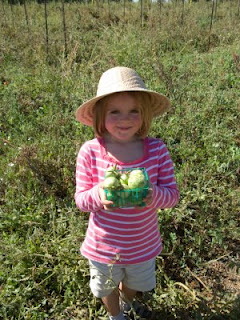 that did not discourage her tomato endeavours. Esther also carried a little one.

I was probably the only one with two useful hands but my 3-year old was whining. “It’s full of dirt Maman, I want to get back home!” What can I say? My little urbanite doesn’t live on a farm. Fortunately she noticed her little friend Lily helping Heather and so, started helping her too. Spotting red tomatoes through green leaves is not difficult but then, you have to discard the half-rotten ones, the “squishy” ones, the bad ones.

My 5-year-old was getting pretty involved, especially after she and Lucas noticed the Green Zebras. Green Zebras are a great tomato variety with whitish stripes, a very firm texture and a tangy taste. They make for fantastic tomato salads.

Both children went crazy over the stripes and literally went on a treasure hunt in Nigel’s fields. It did not take long for Lily to join the fun.

Meanwhile the litller ones were getting tired and before heading back, we opted to visit the chicken coop. There, we had the biggest surprise ever.

Who ever heard of chickens fed with organic jalapenos, cherry tomatoes, squashes, cucumbers and apples? Eatwell Farm clients who get the farm’s eggs probably have no idea how lucky they are. Only the best organic produce for these feathery guys!

Candidly, I never heard of anything but grain-fed chickens. 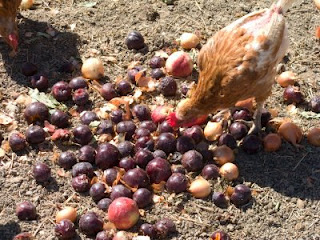 When my grand-father ran a chicken farm in the South of France in the 1980s, his volatiles were always fed corn in dusty barns lit with low-lying aluminum lamps.

To this day I remember the sweet grain smell and busy rustling of feathers. It did seem pretty crowded in there and they didn’t get to go out much (except to get slaughtered or sold, obviously). Life wasn’t a picnic for them.

Nigel’s chickens are treated like royalty in comparison! They eat fresh produce year-round, have their private elevated red-painted quarters (very cheerful) with stairways and awnings for sun-protection, run around as much as they want in their fenced-in area, are protected by a big barking dog and see the sun every day. Fancy that.