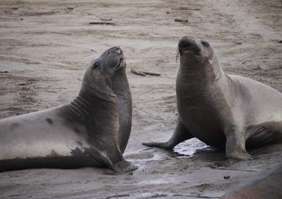 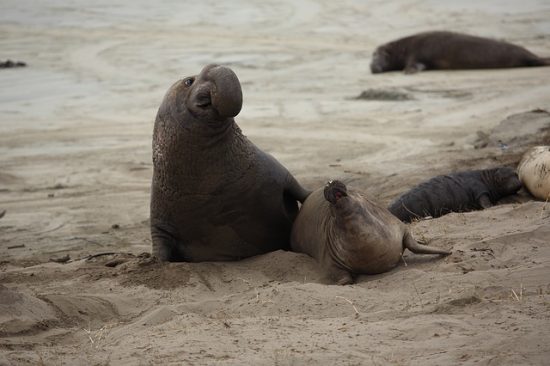 If you want to see this seasonal treat, there’s only one way. You have to reserve a guided walk now. We took my brother’s family and our 4 kids (10 months, 2.5 years, 5 years, 7 years) on this walk in late December and without exception, they all loved it. Come on, big seals flopping on the beach? 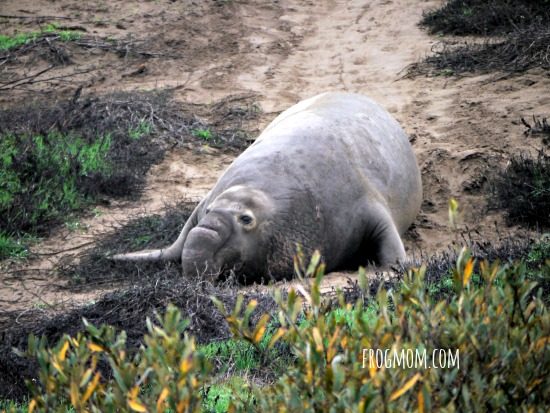 La Punta de Ano Nuevo was named on January 3rd, 1603 by Father Antonio de la Ascension, chaplain for the Spanish maritime explorer Don Sebastian Vizcaino. Commissioned to map Alta Calfornia by the Spanish Viceroy of Mexico, Vizcaino sailed a crew of 130 men on 3 ships and recorded ecological features from the San Diego bay up to Oregon. This is how Ano Nuevo got its name – one of the oldest place names in Northern California.

Had Vizcaino’s expedition landed that day, they would not have found any elephant seals on the beach. Not a single one. Grizzly bears were the kings of California on land then. Elephant seal pups would have been no match for the fierce bears. Surprisingly, elephant seals only started appearing at Ano Nuevo in the early 1970s. Almost 40 years later, the colony has grown from a few hundred to 6,000 animals in the park by early February each year.

As we arrived at Ano Nuevo’s visitor center, we checked in with the rangers and received a trail map. Our group had already started but the ranger called the docent on duty we’d be joining 10 minutes later. We followed the easy sandy trail and arrived at the staging station, where seven people were observing marine mammal skulls. We introduced ourselves to the ranger. There were two other families that day, two people from San Francisco and their visiting relatives from South Africa with two tweens. 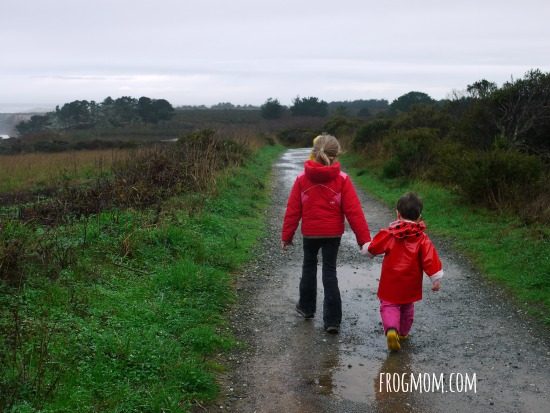 Into the Sand Dunes

Immediately, ranger Phil included us in the group and we started off towards the sand dunes. The sand dunes is where the elephants seals can be seen. Ranger Phil was amazing with the kids, involving them in the elephant seal explanations and getting the message across in words they understood. I was impressed. We walked past the gate that indicates the restricted zone and past the “Wild Elephant Seals – stay back 25 feet” sign. “This must be the most photographed sign of California!” joked the ranger. Ha! We all took turns to photograph ourselves in front of it and proved his point.

The 25-feet part is for real, ranger Phil explained. Though enormous and gelatinous, elephant seals can be fast animals and if you are in the way of the object of their desire, you’ll end up as beach burger. His advice? Buddy up with people around you and don’t let kids get close. Parents, it’s not OK to ask a toddler to pose in front of a 5-ton wild animal. Just sayin’. 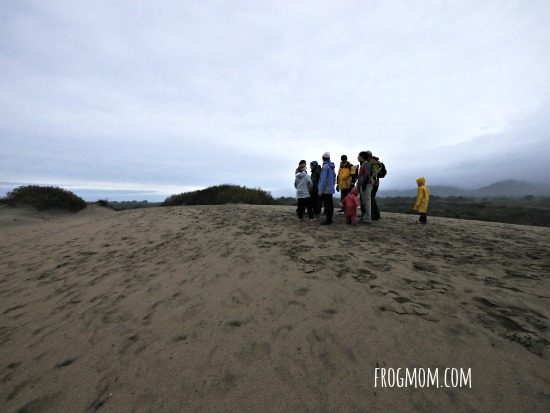 We left the dirt trail to continue up the sand dunes, between thickets of low willow and lupine bushes. Brown pelicans flew overhead, out to the ocean. Soon we met ranger Chick stationed between two dunes. Twenty feet away, we saw our first elephant seal, a sleepy sluggish guy completely inland. “He has probably been kicked off the beach by another male,” explained ranger Chuck. A deep gurgly sound came from the beach. “That’s the male threat call,” explained ranger Phil. As in, get-out-of-my-way threat call. You can listen to a recorded male northern elephant seal call here, it could remind you of your snoring grand-dad. 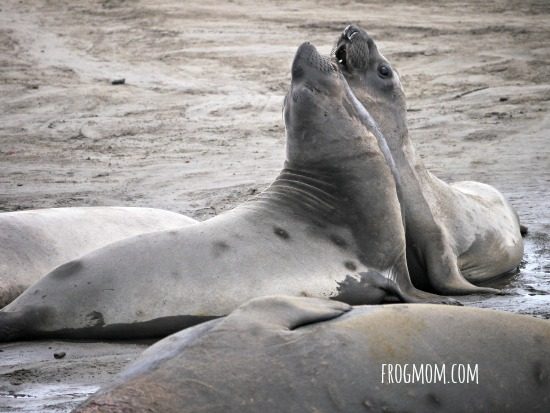 The threat call completely got our attention. Was it the anticipation before an action scene? The realization that we were entering a boxing ring? Whichever it is, we all moved more cautiously and surveyed every single bush as if they were about to jump at us. The route to the southern dunes was blocked by two elephant seals on the move so we headed to the northern observation platform first. 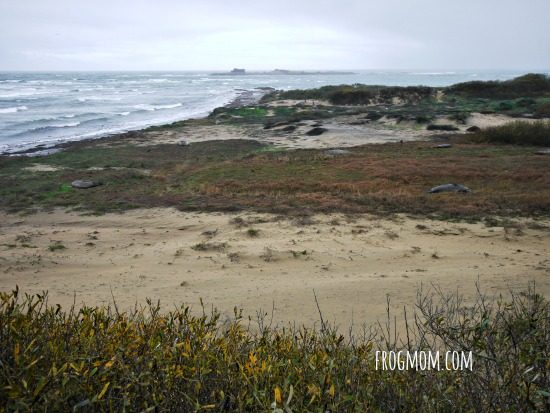 Ranger Phil was just explaining how elephant seals can touch their nose with their tail bending backwards when we reached the top of the dune and took in Ano Nuevo Beach. What a sight! 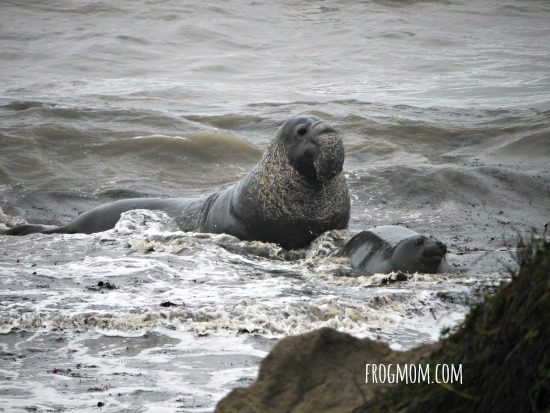 Though we were still early in the season, there were elephant seals lying on the beach, others wading in the water, a pup giving us the cute look. Cameras went crazy.

To top it off, a sorry-looking coyote crossed the beach looking for dead pups to eat. It was Discovery Channel Central here! Poor thing I thought about the coyote. Looking miserable and hunting for dead food to fatten up? I thought coyotes were predators, not scavengers. 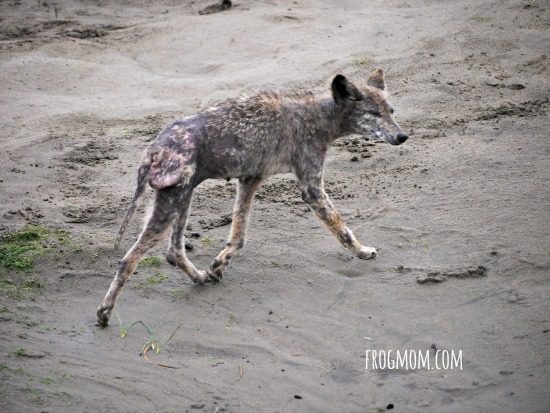 Tough life yes, but not as tough as the life of northern male elephant seals around us. For most of them, Ano Nuevo is a one-way ticket from the Aleutian islands. Between the great white sharks and killer whales in the water, heat exhaustion and male fights on the beach, many of the alpha males never return.

In sharp contrast, females live 7 years older and pick the male of their choosing. They are also the best divers, having been recorded 30 to 40 minutes a mile deep. But as far as moms, they aren’t very caring. 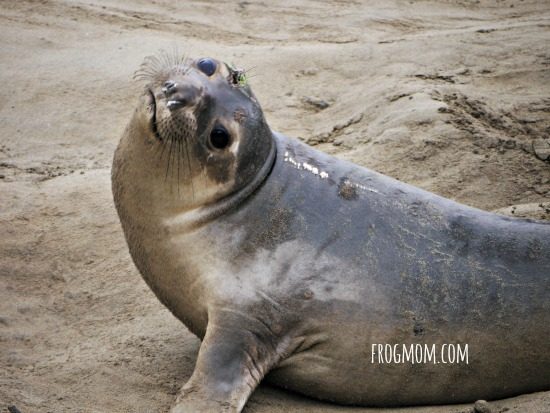 After pups are born, females nurse them 28 days on the beach and one foggy morning, they swim away and it’s “Ciao baby! Time to go get your food.” I guess it takes that to toughen them up and get them ready for the hard knock life ahead of them but still… 28 days isn’t much of a pampered childhood.

Weighing in at 6,000 lbs a pop for alpha males and 60 lbs for newborn pups, these mighty swimmers mostly live underwater–up to 90% of the time. Eventually we made our way to the southern observation platform, narrowly avoiding being blocked off by another Jabba the Hut contender, and trailed back to the visitor center.