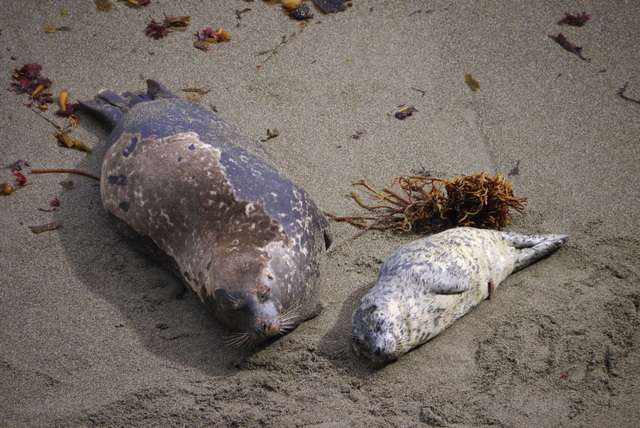 A baby harbor seal hobbled clumsily after his mom on the sandy beach of Whalers Cove at the Point Lobos State Natural Reserve, trying his best to catch on with mom, latch on and nurse. “This one was born this morning, he’s only five hours old,” said a docent who was monitoring a pregnant spotted harbor seal showing signs of early labor. Only five hours old and already running – what a super little guy. “He’s so cute!” squealed my girls pointing to one harbor seal pup, then to another. Standing atop the bluffs, we were barely 20 feet away from the closest harbor seal family. Never before had I seen live seal pups, let alone harbor seal pups chasing their lunch. This was a morning to remember, a morning spent witnessing the miracles of marine mammal life unfolding.

Known as the crown jewel of California State Parks, Point Lobos is a filmmaker’s and photographer’s dream. Its rugged coast and dramatic cypress grove have been featured in Ansel Adams’ photographs as well as many Hollywood films, including Hitchcock’s Rebecca and  Nichols’ The Graduate. For our family though, the best show was taking place on the beach at Whalers’ Cove.

Whalers Cove. The name says it all. Nowadays you can visit a small wooden cabin there, the Whalers Cabin and Whaling Station Museum. A tree’s massive root system sticks out from one of the walls. I learned about the Chinese and Portuguese whalers from the 1850s to the 1870s, the dairy ranching from the early 1900s to the 1950s, and abalone diving and canning from 1898 to 1930.

My 8-year old was transfixed by a 1900s Japanese diving suit that looked right out of Jules Verne’s fantasies, including the brass helmet. My 6-year old was more interested by the miniature toys in the room next door. A docent walked in and said “Come out! You can see a sea otter in the scope!”

Stepping out of the cabin, we looked through the round lens and saw a moustached furry ball floating out to sea. Comfortably resting on her back above the kelp forest, she was out to fish for her young pup. Just like the photos in nature magazines! Seriously, it was so cool. If you’ve never seen a sea otter in your life, this may be your chance. Down on the beach, that’s where the harbor seals were. We made our way to a big group intensely watching a dozen seals. Spotted like marine leopards, the seals were lounging the day away on the wet sand as the surf washed the shore. Docents commented on their various behaviors and I interviewed one of them on their nocturnal habits.

You can watch my movie here:

After an hour or so, we decided to go on with our exploration of Point Lobos but in fact, we could have stayed at Whalers Cove all day. Watching the harbor seals was as good as watching a National Geographic documentary movie.