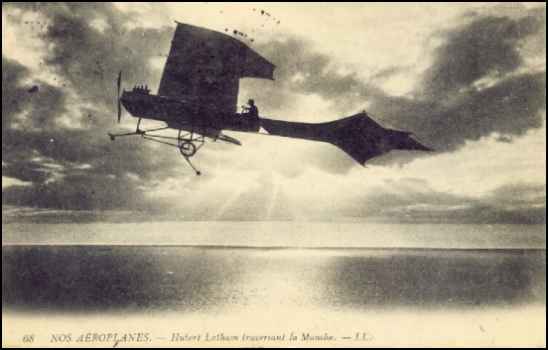 On July 19, 1909, my great-great-uncle Hubert Latham looked across the English Channel from Sangatte on the French coast. Strong winds had finally abated and the weather looked fair for a first crossing of the English Channel by aeroplane. At 4.30 am, he took off from Cap Blanc-Nez aboard the Antoinette IV, an early monoplane fit to attempt to win the Daily Mail contest.  Sadly, 8 miles in the crossing, his engine failed and he crash-landed the aeroplane on water. While waiting for the torpedo-destroyer Harpon to rescue him, Latham stood on the plane’s wings and smoked a cigarette. The cigarette anecdote is one I grew up with as it’s quite a striking image. It was part of family lore as much as Hubert Latham was part of the family legend. We all know that Louis Bleriot succeeded in crossing the English Channel first, but when I swim across the English Channel in two weeks, I want to pay my own respects to the ancestor who kept his cool in a difficult situation. I’ll learn a long poem or a text he enjoyed and say it in my head as I take my turn swimming hour-long shifts in the frigid waters.

Two weeks ago (4 weeks before the opening of our tide to swim across the English Channel), I headed to Dover for more Dover harbor swim training. The day before, I went for a walk on the White Cliffs of Dover with my family and on a clear afternoon, we looked across the Channel. It was silver blue and big ferry boats, small as toy boats, navigated the currents, leaving a shimmery trail behind them. I could see France, it was so close. I could see French cliffs with the naked eye and with a scope, I would probably have been able to see Cap Blanc-Nez. 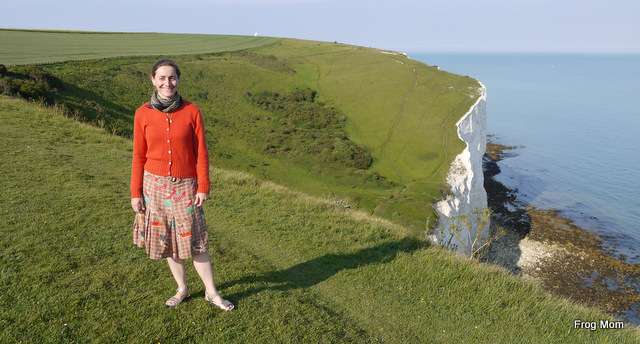 I thought about Hubert Latham’s resilience and his sense of adventure. He tried something that had never been done before and he must have known the risks. Yet he went ahead and launched from a cliff over 21 miles of open water. What a man! I imagined his disappointment, as he attempted another English Channel crossing a couple weeks later and crash-landed–again–in sight of Dover. Most people would have been crushed and given up, but not him. He went on to fly across the world and to set several height world records as a pioneer aviator. Definitely an inspiration to me.

After the cliffs, we visited the Louis Bleriot memorial on the slope behind the Dover castle where he landed his aeroplane. It’s a bit sad and forlorn, but the shape of his plane constructed in granite blocks on the ground is still a powerful testament to a great adventure. 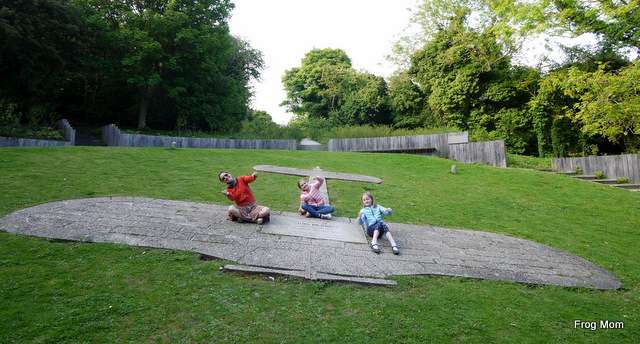 Where does this take us in terms of my training to swim the English Channel?

On Monday, I took a rest day. On Tuesday, I went to my master’s class in the morning but inadvertently forgot my swim suit in the locker room, nicely wrapped up in the gym towels. By the time I realized that, I was a swim suit short and my swim suit was on a great truck adventure with hundreds of white towels. Fortunately, I had a spare and on Thursday night, went for a swim in the river Thames with a group of Serpentine Swimming Club swimmers, relay team swimmer Vanessa and a Bay Area dolphin club swimmer. That was fun! 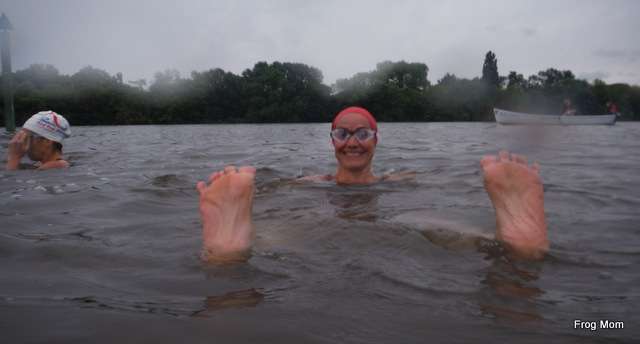 On Wednesday and Thursday, I took a rest but feeling inactive, I went to a pilates class at my local gym. My lower back had been giving me some grief and I hope this helped. On Friday, I felt ready to swim again and left home on my bicycle at 7am to complete a 2-hour swim in the Serpentine at Hyde Park. There was a freaky giant pink inflatable swimmer anchored in the lake for the world triathlon competition and I tried to avoid it as much as possible. Two hours and 16C later, I was tuckered out and treated myself to eggs for breakfast. Nutrition, my latest concern! Friday was my first time feeding during a swim–energy gel–and it really helped keep the momentum when my energy store ran low. Saturday was another rest day and Sunday morning saw me in Dover harbor. For the first time, I swam with members of my relay team. Yahoo!

From left to right, you can see yours truly, Stephanie, Claire and Alice. 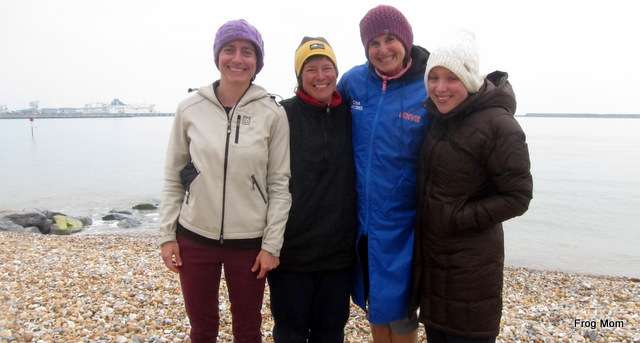 Both Claire and Alice completed their 2-hour qualifying swim that day. Well done, girls! This is Alice getting out of the water with a smile. Attagirl! 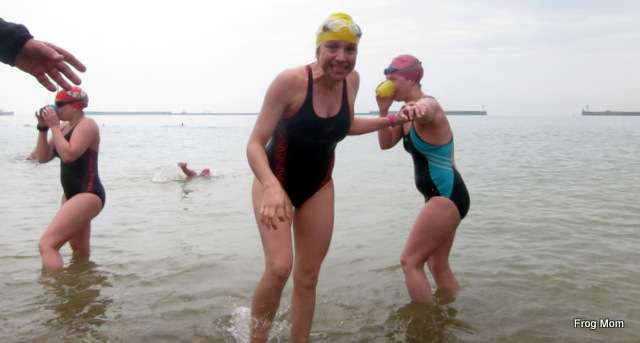 The water was around 13.9C/57F and the weather was so menacing that it rained a fair bit while we were swimming. Since we were already wet, that was no biggie but I was happy I’d instructed my girls to take shelter under a concrete kiosk in case of rain. My only worry was that our dry stuff would be wet but my thoughtful husband had covered everything with a blanket. Stephanie and I swam 90 minutes. That’s us here, on the pebbles, with a friend of Stephanie”s on the right. 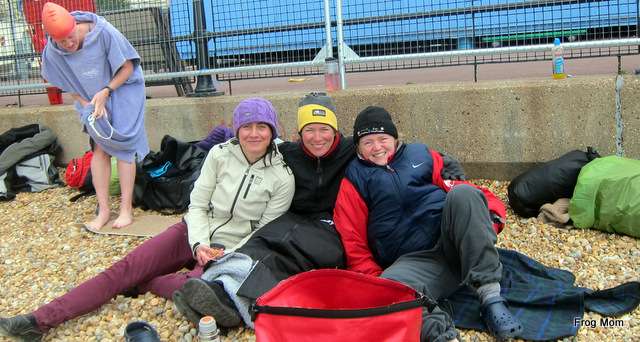 Another first for the week, I tried on a dryrobe! I was quite cold and shivering when I got cold so Stephanie wrapped me up in a delicious warm and cozy thing called a dryrobe. It looks toasty and it is toasty. 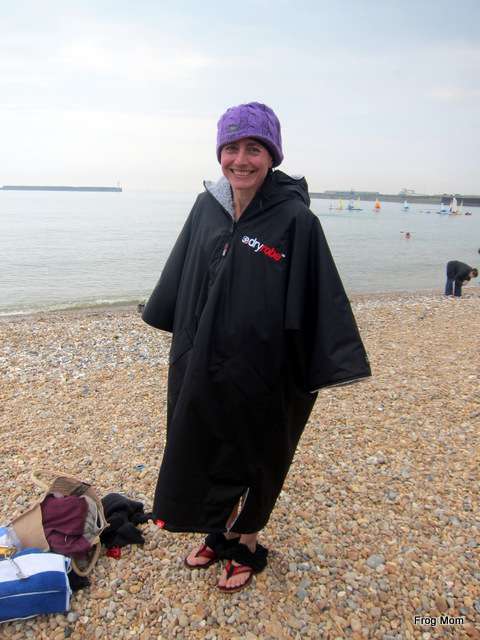 I’m behind in writing and my big swim is two weeks ahead.

If you haven’t contributed to my fundraiser yet, please donate to Medecins Sans Frontieres here. They’re the reason I’m swimming 6 days a week. I truly hope that this can help them do more great work in war zones across the globe. 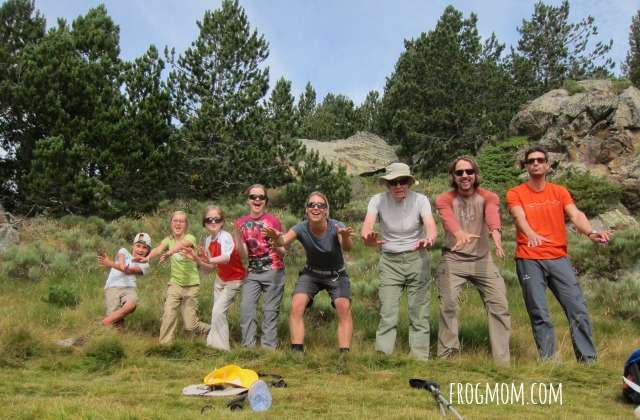 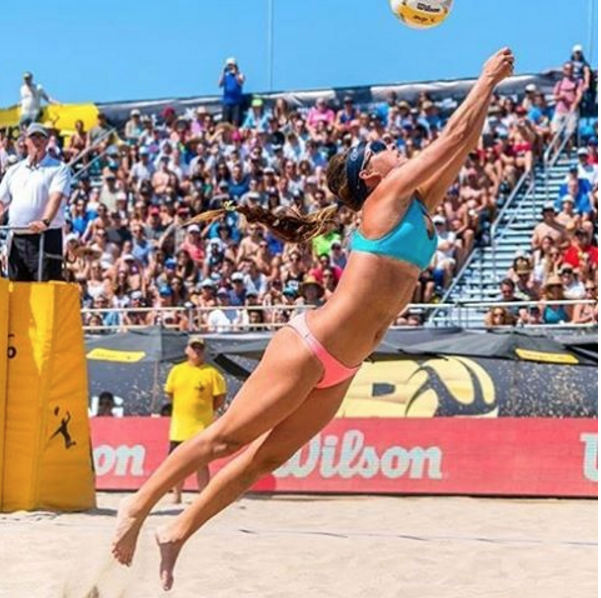 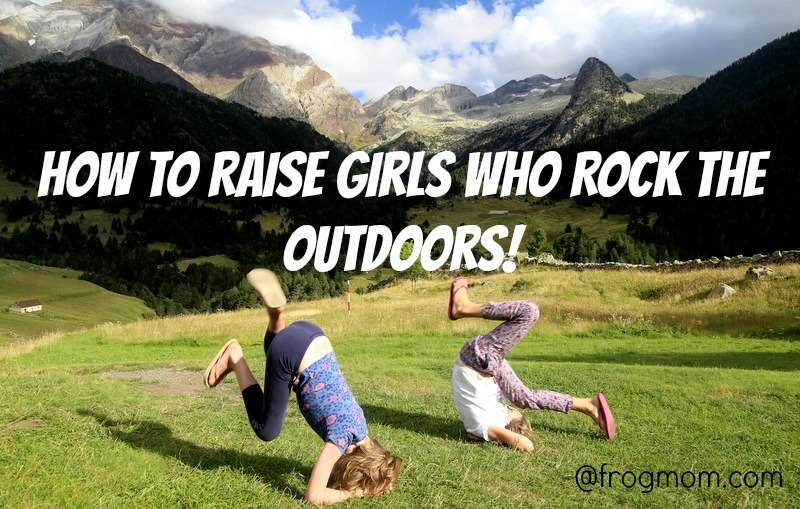