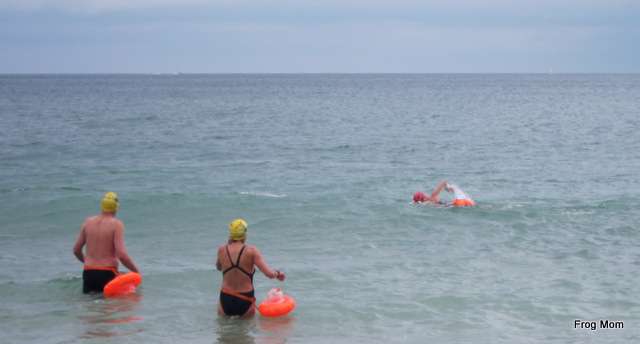 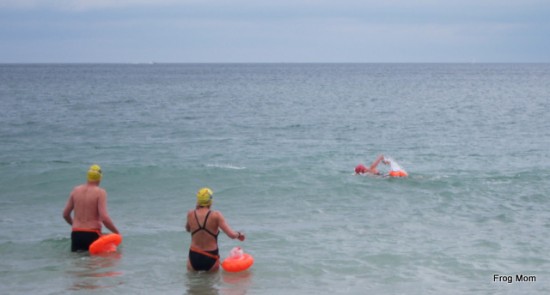 Two Sundays before our relay swim across the English Channel to support Medecins Sans Frontieres, I took the family down to Bournemouth for a last sea swim. It was the perfect opportunity to go for another double dip, these swims where you swim an hour, get out and dry an hour, get back in for an hour. A truly invigorating experience! Double dips are the best preparation for relays, because we will swim an hour at a time following a pre-determined order. Though currents, sea and temps will be different, this is still as close as it gets in terms of actual training from land.

So far, my only sea experiences have been at Dover Harbour (here and here). I wanted another sea experience, preferably in conditions where I would not be protected from the open sea by a wall. Also, my girls welcomed the idea that they would be able to play on a sandy beach next to a pier. Hard to beat that sort of beach appeal. The reason I picked Bournemouth and not elsewhere was the Durley Sea Swimmers. Indicated by a member of my team (thanks, Mike!), they meet every weekend in Bournemouth during the nice season and are a great alternative to Dover. Thanks to dedicated volunteers, they even replicate a similar support structure and I loved it. Here is how it works.

A couple days before the weekend, Marcus (from the Facebook group) emails swimmers sea and weather conditions for the weekend, as well as what time it is recommended they be in the water. Obviously, this is not an organized club and each swimmer decides whether or not they get in, but the experience of other local swimmers is invaluable. On that Sunday, swimmers were supposed to get in at 8am. Coming from London by train, I knew I wouldn’t be able to be on the beach before 11am and Marcus suggested I get to the beach as close as possible to the hour and jump in with the other swimmers. 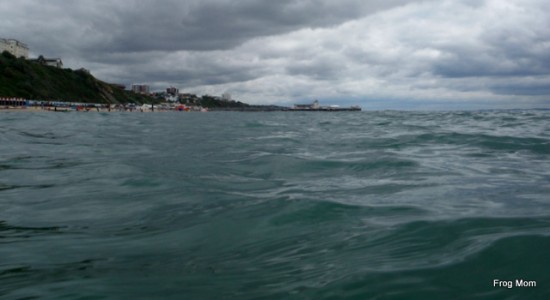 The swim consists of an hour loop which starts at Durley Chine beach, swim 3 groins towards the Bournemouth Pier to the groin before the Pier, 8 groins in the opposite direction (3 past Durley and another 5 in the same direction) towards Alum Chime beach and 5 back to Durley. A loop is about 2.7/2.8km but depending on pace the loop can be extended or reduced when heading towards Alum Chime beach. That makes for an hour loop (roughly) and allows swimmers to feed at the same time or get in and out at the same time.

The best part of this meet is that the Durleysea  swimmers maintain a healthy relationship with the lifeguards. I don’t know how best to explain it. Individual swimmer safety may be up to each person, but to improve visibility, Marcus suggested that I swim with a swimming floatie. It was indeed very useful and I’m glad he brought it up. Once we swimmers were in, we swam along the beach and past three lifeguard huts who were aware of why we were in the water and what we were doing. If there was any worry that a swimmer hadn’t been spotted for a while, then the 3 lifeguard huts would have radio’ed each other to look out for the orange floatie. Marcus and his support crew also had binoculars and I was amazed that they could identify a swimmer from 200m/600 feet away, just by the color of their swim cap. How do you identify a speck in the sea! Wowzers, they’re good at this. 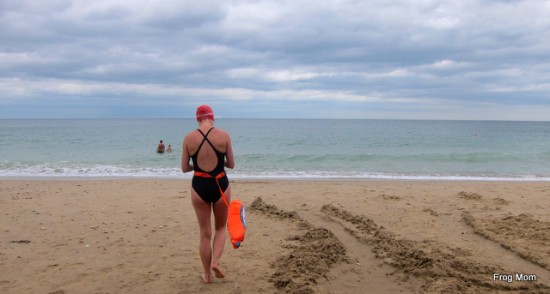 Our train arrived at 10.35am and at 11.10am, I entered the sea for my first loop. My husband set up our girls with my friend Marie-Astrid and her three girls, and then he changed into his wetsuit and went swimming too. About an hour later (possibly slightly less, though Scarlett was nice enough to confirm it was an hour), I got out and felt a bit cold. Stupid me, I then made a bad decision. Since I was going to get back in the water, I decided not to change into dry clothes but simply to wrap myself in a towel and wait it out. What a very bad idea!

The wind sucked the warmth out of me and the sun was playing hide and seek with a predominantly grey sky. Soon enough, I put on my jacket and took shelter close to the lifeguards beach hut. Brrr, drying was a slow process. Before going in again, I drank an energy gel with a mouthful of water. It tasted rather bland, slightly sickening. The kids were busy burying each other in the sand, a great activity that made them ignore our picnic lunch. They didn’t seem to mind the weather either, which I thought was rather extraordinary. 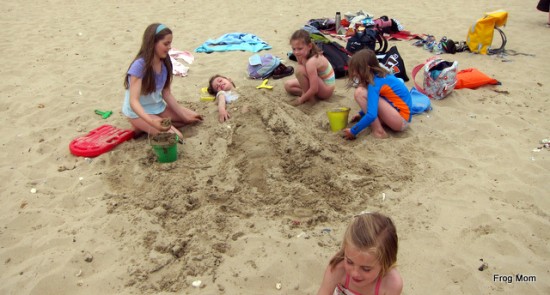 I went in again and this time, it was much easier than the first time. Now that I’d seen the lay of the land, I didn’t lose any time orienteering, looking for other floaties and just swam, checking the time on my watch to know when to turn back. Double dip, check! As I got out of the water, I saw that my husband was back from the sea and my 10-year old gently wrapped a large dry towel around my shoulders. Fantastic service! I finished right after Steve, another swimmer who was completing a 6-hour swim as a last sea training before his solo Channel swim on July 1st. Respect. I could never swim that long. Steve is on the left and Marcus is on the right in this photo. Do I look like a fraud or what? Clearly, long distance swimmers are cut from a different block. 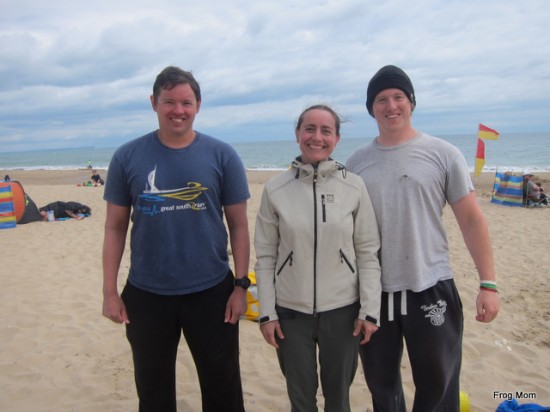 It was time for us to get back and catch our train back to London, but not before the girls enjoyed a ride at the Pier. What’s the point of Bournemouth if you can’t even have fun at the pier? That’s the perspective of my girls, at least. 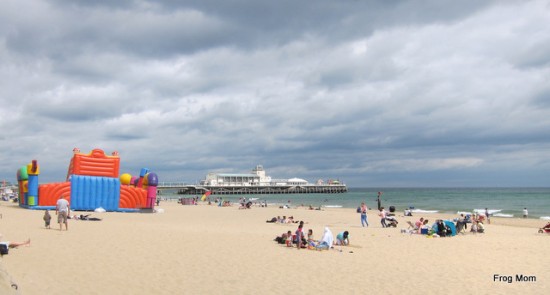 This is what they picked – their choice. Just imagine the screams and you’ll get the idea. It was a wild ride and the girls were half freaked out, half ecstatic by the time they were done. 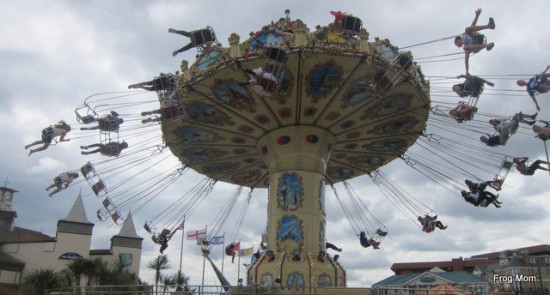 Thanks to Marcus and his friends for letting us join them in Bournemouth. They were super nice and supportive, helping me check when I should get ready, when I should get in and checking that I was fine. I couldn’t have hoped for more supportive people and my girls had a blast at the beach.

As for my relay swim, it’s now less than a week away. Anxiety is building up, it’s getting so close!