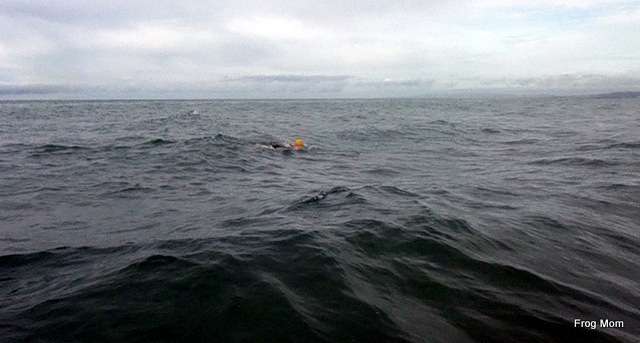 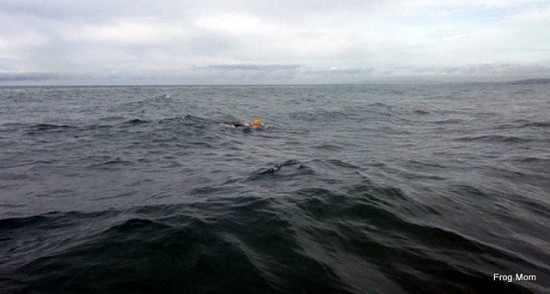 I’ve never swum 2 hours before. Not in a pool, not in a lake, not in the sea. And yet here I was, four weeks away from swimming the English Channel as a relay. On top my list was a 2-hour qualifying swim in water under 16C. Last weekend, I was in the south of France at my dad’s who lives 10 minutes from the coast. All week, I monitored the marine weather forecast. Water temps hovered around 16C, up to 17C, down to 15C. I had a shot! And I took it, though not with a lot of style.

The week started easy peasy. On Monday, I took a rest day from my Dover swims and skipped the evening swim class. On Tuesday morning, I was back in the pool and  went through 1.9K of drills and sets. Wednesday and Thursday were lost to the water world as I traveled for business, but upon my return my husband offered me this wonderful new swim buddy! 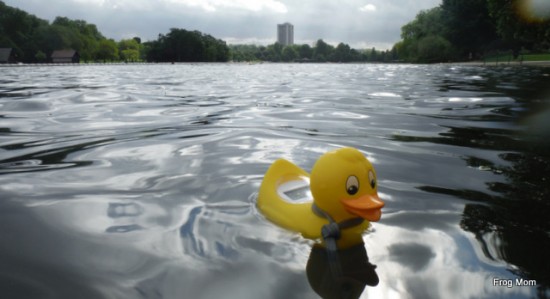 How could I not take it for a swim? The Digi Duckie is to the open water swimmer a great way to be friendly with waterfowl and get the water temperature right. On Friday morning, I headed to the Serpentine and gave my yellow rubber duck her first bath (it’s a girl). Wobble, wobble, pitch, tank. What! It floated lopsided? I would have none of it and coaxed the duck into floating level and still for a few pics in the middle of the lake. It said 18C, which corresponded to the official temp chart that day so I knew it worked. It followed me for 40 minutes at the end of a strap and promptly got packed for the weekend.

Sunday morning. Big day. Lead sky. North winds. I knew it had to be the day. 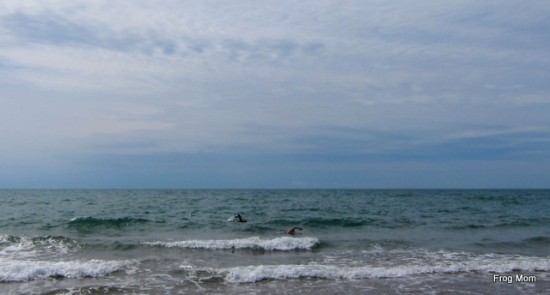 My husband generously volunteered to be my chaperone and donned his wetsuit. My dad drove us to the beach at Serignan Plage, where I waited fully-clothed for my husband to check the temperature with the rubber duckie. 15.5C! I got changed into my swimsuit and we bade goodbye to my dad. I started swimming at 9.14am and for the next two hours, became obsessed with the passage of time. I might be a bit anal about details but when it says 2 hours on the paper, I make sure I’m wearing a cheap waterproof watch so I can swim exactly two hours.

As I said, I’ve never swum 2 hours before.

In the beginning, I swam beyond the breakers as the sea was smoother there. However, I quickly became anxious and borderline paranoiac. Without a boat escort, I felt exposed, vulnerable. Knowing zilch about local currents, I didn’t feel in control and decided to play it safe. The washing machine. Whereas my husband stayed further at sea, I hugged the shoreline so close that I became a play toy for crashing waves. I choked on sea water once. Twice. When I had enough, I got up and walked to deeper grounds so I could carry on with the swim. After 40 minutes I was ready to give up and after an hour, my lips were trembling. Great.

Fortunately, my husband never gave up. “Come on! What are you doing!” He’d wave his arms around, point at me and tell me to get back at it lest I get cold. I was cold. Never mind, I just got back at it. At one point, I thought I was hallucinating and saw a naked guy jog on the beach. I removed my goggles. He was for real! “French fry in the open air,” observed my husband. We both watched his bare butt jog away, rather incredulously.

At the 1-hour point, we turned around and so did the waves.

Past the first hour, I knew it was only 59 more minutes. It’s all in your head, they say. So I did some more of washing machine-getting up-swimming farther-swimming closer and so forth. Finally, I saw my uncle Guillaume on the beach. He must be with my dad, my 8-year old daughter and my aunt Paule. Make them proud, I thought, keep swimming. I only 7 more minutes to go but they were 7 tedious minutes.

At 11.14am exactly, I got out of the water and walked towards my little girl who was holding a towel bigger than her while my uncle was filming. 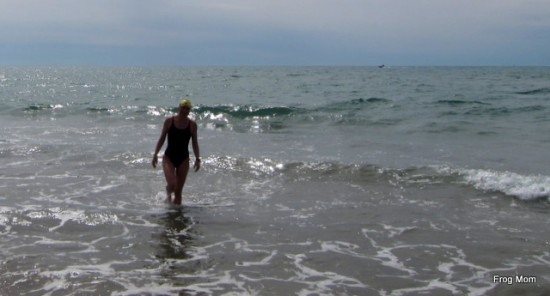 I was cold! Cold but I had done my 2-hour swim. Sorta. Shouldn’t have walked out of the waves to go swim further so many times but I didn’t see a better option.

My little girl patted my shoulder and congratulated me. Well done, maman! 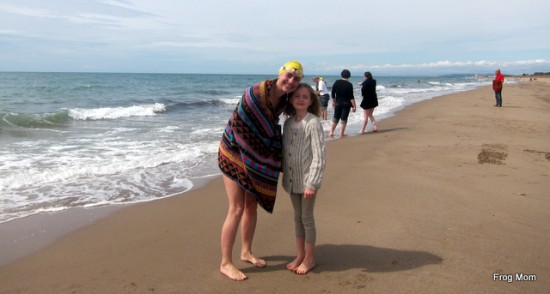 I was thirsty too, oh so thirsty. Man, the Mediterranean is salty! My gums were raw with sea salt. Shaking like wheat grass in the wind, I drank hot tea and it tasted incredibly sweet. Sweet was good as was being out of the water. We stayed on the beach a quarter hour, warming up and getting dry. Then it was time to go home. In my dad’s words, lunch time. The five of us packed our knick knacks and got in the car. 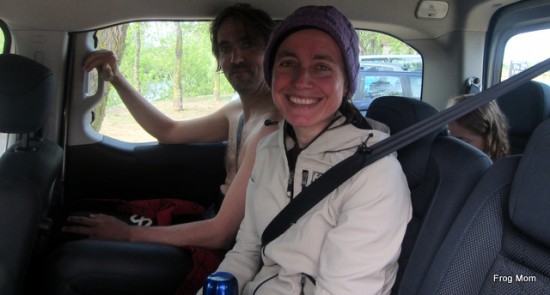 My cheeks felt like they were on fire, I also beet red! Should have been more careful with the sun. A half hour later when time came for the aperitif, I wanted nothing salty to eat. A cup of muscat wine would do. I’d ingested enough salt for the day, thank you very much!