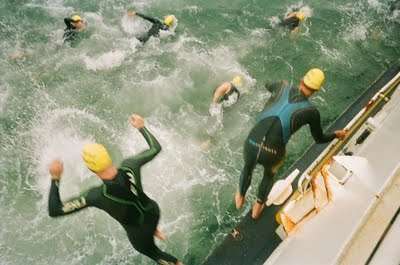 It didn’t really dawn on me that it was perhaps a crazy idea until … a minute after I jumped off the boat. There I was, in my wetsuit, floating in the low 60s San Francisco Bay waters, east of Alcatraz, with 600 swimmers ahead of me following an ebbing line of kayakers. A big “Warning” sign shouted “Keep off this island” in bold official letters. Now what? I was dumbstruck. It’s like I was waiting for an off-screen voice to take control and narrate that “now the last of the swimmers has jumped and the first is already half way through the Bay breaking through the waves…” In a haze, I processed the early morning events, the ferry ride to Alcatraz and figured out the next step. It really helped that it was starting to feel lonely with everybody else way ahead. Time to swim back to shore, time to get cracking!

On Sunday September 13, 2009, a few hundred (600?) people took part in the 29th annual Escape from the Rock Triathlon. This triathlon is known as the poor man’s “Escape from Alcatraz” because anybody can sign up (no lottery, no qualifiers) and it’s a lot cheaper – with a comparable course. Basically, you start with by crossing the Bay from Alcatraz Island to San Francisco, then you run, then you bike, then you run some more. I only signed up for the swim part and believe me, that was enough to keep me busy all summer. Even after four months of training, I was in no danger of winning. I was just about to fulfil a San Francisco ritual that very few San Franciscans achieve: escape from Alcatraz by way of water. My only concern was being so sluggish that I’d be carried away to Japan by the currents. Well, obviously I made it back to the city of locally-grown whole-grain organic pizza! That, in itself, is a small victory.

The training
I was fortunate to find a swim partner early in my training in my friend Christine. That’s her on the lawn at Aquatic Park. She really helped keep the momentum going. Honestly, there’s nothing like dragging a good friend in a potentially unpleasant adventure. The two of you can commiserate together. Plus, Christine was a competitive swimmer in her (distant – teenage) past so she was really an asset in the general scheme of things – and a friend, because she signed up without blinking twice. I was the one who needed coaching. Last May, I couldn’t swim two 25-yard pool laps freestyle without suffocating.

So together, we attended Swim Art’s Wednesday evening open water swims at Treasure Island every other week and met for Sunday morning swims at Aquatic Park. Swim Art is really a whatever-swim-level-friendly support system to Bay Area open water swims, as this article proves. I’ve seen beginners like myself as happy as advanced swimmers. If you want to swim from Alcatraz or in the Bay and don’t know where to start, Leslie and her team are the answer to your dreams.

Plus, swimming at Treasure Island is kind of funky. You navigate your way in a cove between boats, most anchored, some sunken, and you get to see the future Bay Bridge from a rare angle. Aside from the Bay, I followed a pool training too. By myself, I haunted the Brisbane Community Pool twice a week, following Leslie Thomas’ 8-week training plan for Alcatraz. As instructed, I printed it and inserted it in a ziploc bag for poolside reference purposes. I only rescued it once from the bottom of the pool when the wind acted up.

For more pizzaz and on two occasions, Christine and I strayed from the usual gig and swam across Tenaya Lake in the Yosemite National Park, and in the Bay from St Francis Yacht Club to Aquatic Park. It was like Star Trek in open waters: to boldly swim where…. It all felt very adventurous to me.

After the summer, not only was I prepared to jump into salty cold water with 1-foot visibility (see murky self-portrait through water for illustration) and aquatic life around, I was asking for more. Fortunately, the race provided a sane reality check on my path to the Olympics.

Race Day
Escape from the Rock is really a race. I’m saying that because I made third worst and because my only goal was to get to the finish line without becoming shark food – although really, man-eating sharks are a myth in the Bay. They’re only in this text for cheap thrills. Coming back to the race element, the fastest swimmer completed the 1.5 mile race in a brilliant 28 minutes 37 seconds and I’m in total awe.

On the morning of the race, I got up at 5.30am. We were to meet at the San Francisco Maritime Museum between 6 and 7am to register. My roadie family got up too. They don’t like to get up early to freeze their toes off by the beach but they were gracious about it. At Aquatic Park, they dropped me off and I walked into the last of the night to the museum.

The place was buzzing with white lights and people. It felt outlandish. A volunteer asked me to make two fists and scribbled my entrant number in black ink on my hands: 488. I registered and followed the line of people to the far western end of Aquatic Park. By the Dolphin Club, a guy was checking the kayaks. Christine arrived and we sat on the lawn area designated for “Swim Only” participants. At that point, I pretty much felt as casual as if I was going to a party. I sensed no nervousness around me, just anonymous faces looking eager to start.

I fixed the timing chip around my ankle, wondering how it was going to get activated. At last we got going. At 7.15am, we all walked to Pier 39 to board a ferry. Seeing hundreds of swimmers in wetsuits, some half naked some barefeet, around Fisherman’s Wharf must have been quite a sight for the tourists. Christine’s husband snapped shots of us before we lined up with the “yellow and orange caps.” I daresay, the adrenalin was kicking in.

Oh, how calm and tranquil the waters seemed on the ferry ride. Alcatraz, the prison island – the island that was so well protected by its treacherous currents that only one successful inmate escape is recorded. I took a breath. The air was fresh but not cold. The wind picked up slightly. A Yang Ming tanker crossed the Bay in the distance and made big waves.

We circled around Alcatraz and got in position behind the line of kayakers. The boss of Envirosports kept telling the kayakers to move another 50 yards. There, we were good.

The San Francisco Fire Department boat Phoenix shot huge arches of water up in the sky and opened the parade for us. Show time. 1, 2, 3, jump! People started jumping on both sides of the ferry. Yellow caps bobbed up and down the water. Some started head first freestyle in the Bay, others warmed up swimming butterfly. Knowing I’d be amongst the slowest, I waited for everybody to be done so I could jump last. In hindsight, that was a mistake because once you jump, you still have to swim a hundred yards to the kayakers. A strong swimmer will cover the distance in no time and reach the kayaks at the second horn sound. Not sluggish me.

We heard a first long blast off of the ferry horn warning us to get ready, then a second one to signal the real start of the race. I was way behind the kayaks, in front of the big “Warning” sign. For Christine’s water camera, I flashed a smile. We parted ways.

The next second I was all by myself. The trouble was, I had just realized that my goggles were leaking. Too loose maybe? I tried to tighten them, to no avail. Why oh why? All summer I’d been fine and today, the goggles were acting like salt water tanks for my eyes. @@##!! Fine, I had no other choice but to swim anyways. Stroke time. Ah, but the currents at Alcatraz kept me at the same spot. It took me forever to leave that island. It’s the only moment in the entire race when I really asked myself “Why”?

As I slowly saw Alcatraz grow smaller in my periscope, some swimmers went past me. Every three strokes, I stopped to empty my goggles. It was a royal pain and because I lifted my head so much, my wetsuit was rubbing against my neck harder than usual. Sometimes I pushed it to six strokes but the salt really stung my eyes. The city seemed so far away.

Since there were no buoys to indicate the way but hundreds of yellow caps scattered in the water, I followed Leslie Thomas’ advice on sighting: “for the first 2/3 of the way, sight on and aim for the Jeremiah O’Brian Liberty Ship. When about 2/3 of the way across, begin sighting on the Balclutha ship – this is the 3-masted ship docked in Aquatic Park. Follow that the rest of the way, and you will end up exactly at the opening.” You see, getting to the opening is the tricky part because of a very strong current right before Aquatic Park. You miss it, you’ll have a tough time fighting the tide to get back in. You aim too far, you lose time. Ah, strategy.

Despite my somewhat dampened spirits because of the leakage problem, I was glad to be in the Bay and exchanged greetings with a nearby kayaker. Yes I was doing fine. I was on the right track? Great. Galvanized, I plunged my arm. The deeper waves took me on a roller-coaster for a long time.

Christine told me later that she opted to breathe at the top of every wave. That’s an idea not to swallow too much Bay water. Mechanically, I just tried to keep a steady rhythm and wasn’t bothered by the choppiness. About half way through I felt some cold spells. My right hand tingled, I wondered if I had crosssed paths with a jellyfish. No, it didn’t sting. I took a shot of the Golden Gate Bridge. At long last, the big orange buoy marking the entrance to Aquatic Park got closer and I heard the tell-tale sign of shore getting close: the sea lions barking at Pier 39. Yeepee! Pelicans flew overhead.

I was in! Safe at last. Safe in the sense that now I could not get carried away to Japan by the current. All I had to do was finish and meet my little girls and husband on the beach. I swam twice as hard but by then, I was already wiped out. Forget the stylish Raquel Welch getting-out-of-the-Bay. Forget the clean finish sprint. I was tuckered out.

When I got to shore, I almost stumbled to get to the big electronic clock gate. An hour and 18 minutes. That’s how long it took me to swim from Alcatraz to San Francisco. I was 3 minutes overtime compared to the official guidelines. However the reception committee with my family, my friends and my landlord was well worth the effort. I got my fair share of hugs and congratulations.

After I changed and drank a cup of hot tea, I felt like a (tired) million bucks. I’d done it! Now my goal is to do better next year. Alcatraz anyone?