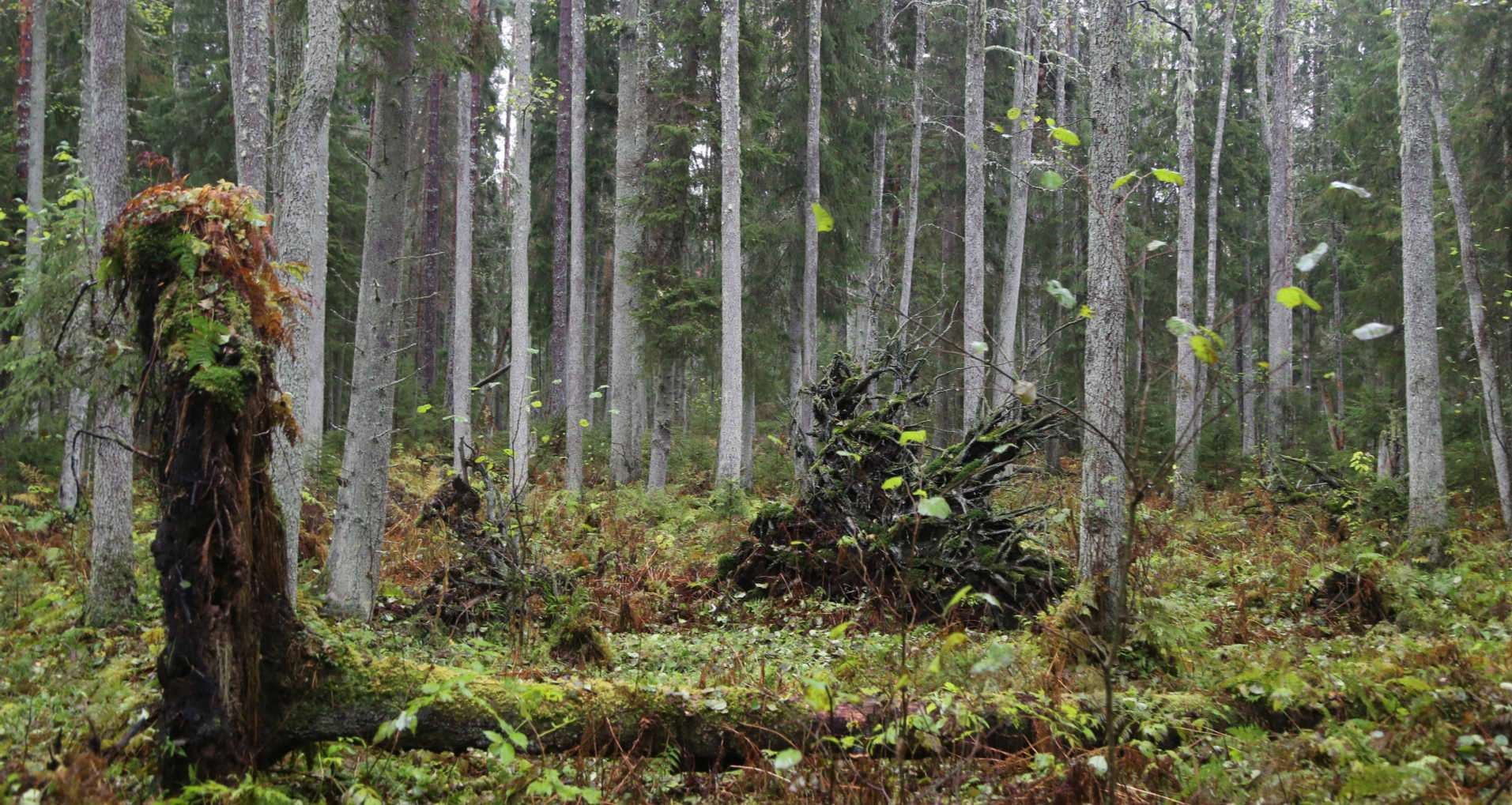 > Estonia Travel: What to Do in Lahemaa National Park

Estonia Travel: What to Do in Lahemaa National Park

Only an hour from the medieval city of Tallinn, Lahemaa National Park in Estonia offers unspoilt primeval forests and pristine coastal beaches close to historic manors, an abandoned submarine base and a captain’s village. Over a period of two days in October, we explored the biggest national park of Estonia and loved every single sight, regretting that we didn’t have more time to see more. Visiting off-season, we basically had Lahemaa National Park to ourselves and were spoiled for wild nature.

These are the highlights of our family visits, as well as eating and lodging suggestions.

Close to the village of Altja, the Oandu Forest Nature Trail (and the nearby Oandu Beaver Trail) were our two favorite hikes in Lahemaa National Park. Used as we were to Western European broad-leafed forests, we loved the fairy tale quality of the Arctic old-growth forest at Oandu. 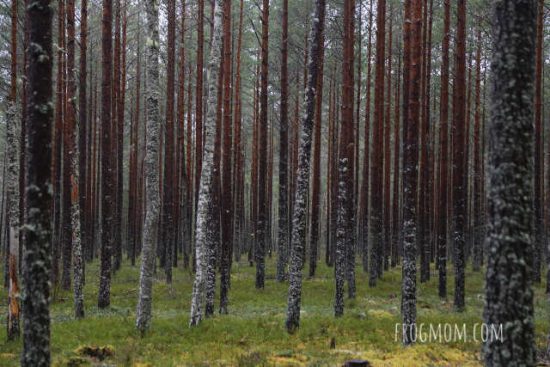 Starting with neat rows of alders, the forest gave way to an Arctic-style old-growth forest with the most wonderful snow-colored lichens, spruce trees and other conifers. Mostly level, the trail included a combination of easy boardwalks over boggy meadows (our girls’ favorite) as well as woodchipped or mossy trails. 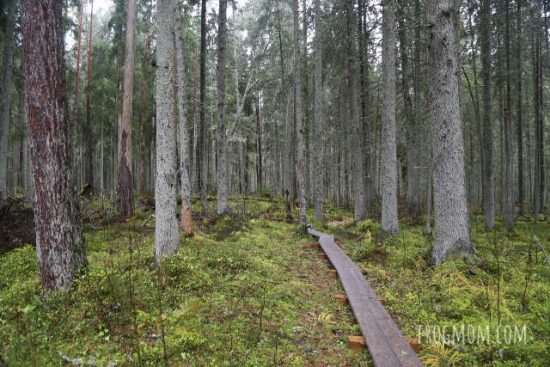 It was truly a pleasure to walk on the ground of this forest (it was so bouncy!), though we were quite alert as moose are known to roam these parts of Lahemaa National Park. 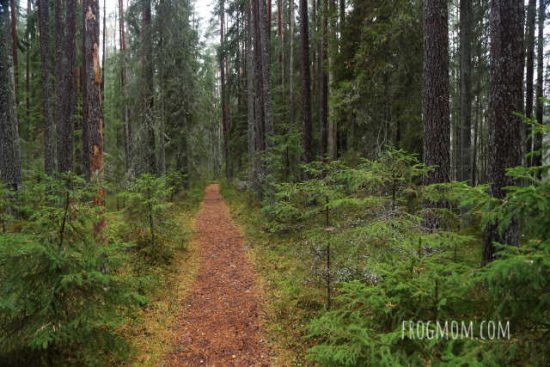 In the end, we didn’t stumble upon any big mammals but the interpretive signs at the trailhead gave a great insight into the biodiversity of this coastal forest.

It sounds like the premise of an ancient folk tale. Once upon a time, there was a fisherman’s village where a all captains of Estonia trained in a wooden school by the sea. It was known as Käsmu, the Captain’s Village. And it is all true. With its pastel-colored houses, funny wooden shutters and nature trail by the beach, Käsmu is a time capsule of pre-WW1 Estonia.

We started with a hike, as we always do, and around mid-morning parked at the northern end of the village by the well-marked nature trail. In full autumn mode, the weather erred on the side of cold and moody but we were well equipped and got on our way through an alley of tall conifers. 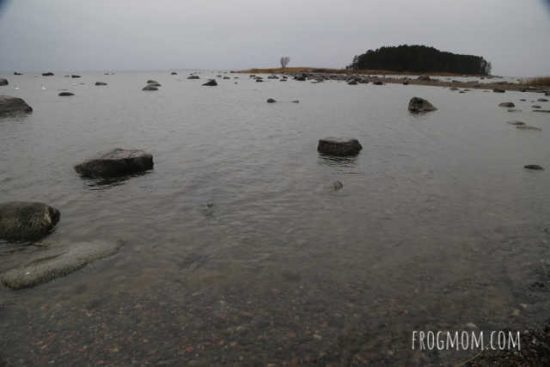 Within a quarter mile, the view opened on a string of narrow sand beds and in the middle of the sea, a chain of erratic boulders. On the glass sea, hundreds of swans were floating in small groups and the sight of these snow white birds on a background of dark boulders and menacing skies was strangely relaxing. We turned around and returned to the village through the forest.

Manned by Aarne Vait, a former diver and maritime archeologist, the Käsmu Maritime Museum was a real gem completely off the beaten bath. When we parked in front of it, my girls both sighed, “not another maritime museum!” Fair enough, I have a weakness for maritime museums. However, they soon changed their mind. 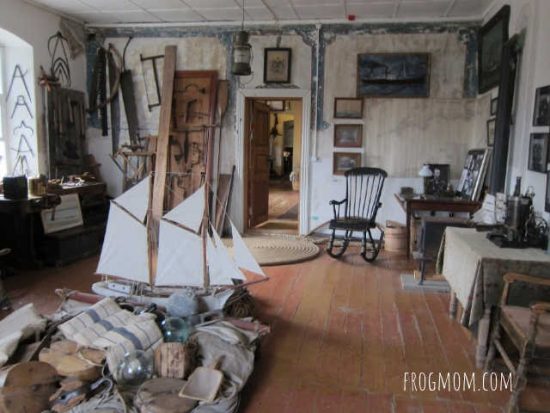 The building, an old house by the sea, was charming and crammed to the gills with maritime artefacts – some recovered from the sea, others donated to the museum. Aarne was absolutely the best and took us personally through his museum, telling us stories about every single item. In front of a box of old postcards sent by captains from the four corners of the world, Aarne told us about his diving days with his brother (a swimming champion, if I remember correctly), about the Russian occupation and about the education of captains. 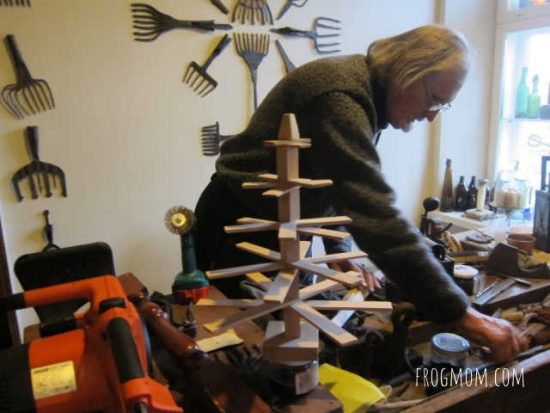 As a cherry on the cake, Aarne took us to his woodworking table and showed us a recent project that I fell in love with – a foldable wooden Christmas tree for boats.

This grand baroque house museum was our first stop in Lahemaa National Park and my girls thoroughly enjoyed this very civilized episode in between two hikes. Furnished as it would have been in the 18th century, Palmse Manor provided a glimpse into the daily life of Estonian aristocracy as well as into large agricultural estates before the Russian occupation. 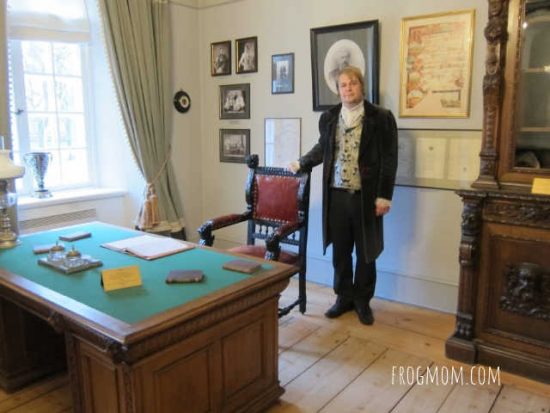 Our girls had a blast trying the costumes in the bedroom upstairs. After the manor house, we took a stroll through the grounds of Palmse Manor House and realized that these estates were true mini-countries that could almost survive without outside intervention. They featured their own grain mill, forge, fish pond, smokeries and more. It was truly well thought-out in the context of a country with harsh winters where you needed to be ready to be cut from the world for long periods of time.

When I read about the enormous wooden swing at the eastern end of Altja village, we had to go there to check it out. Well folks, it is truly enormous. 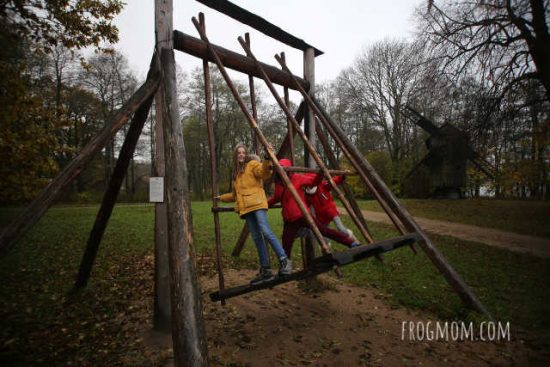 Altja was also a charming village with historical houses like the one below, also completely out of a fairy-tale (honestly, Estonia, did you go for the fairy-tale branding everywhere?). 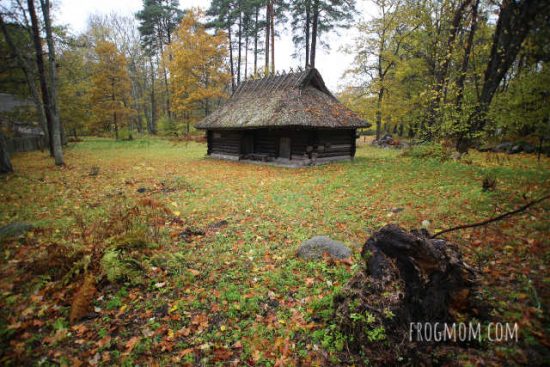 In August 1941, one of the world’s bloodiest sea battles took place at the top of Cape Juminda. When the Baltic Fleet was evacuated from Tallinn to Leningrad, there were cruise ships among battleships with Estonian and Latvian citizens, all forcefully taken aboard. 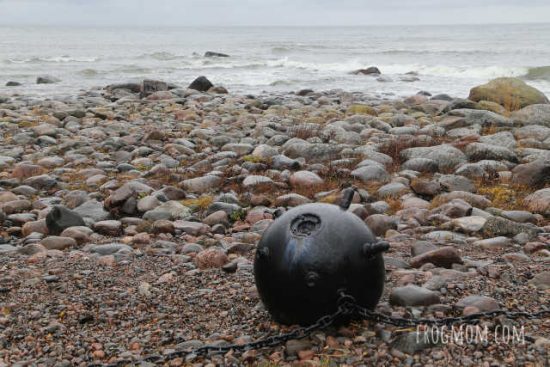 The Finns and Germans had mined a 32 km long strip in order to sink the ships. The strip began from Cape Juminda and proceeded north. The two hundred vessels, which comprised the ship caravan were bombed both from earth and sky by cannons and planes.

The number of victims could have probably been up to 25 000 people according to Mati Õun, an expert of war history. 52 ships sank; the first one to perish had 1400 people aboard and was called Viroonia. This grim reminder of a not-so-distant past shone a much different light on the strategic location of Lahemaa National Park by the Baltic Sea, an important sea route connecting Russia to Western Europe.

Also on the Juminda peninsula on route 272, stop at the tiny village of Hara and explore the Hara Submarine base built by the Russian military between 1956 and 1958. For fans of abandoned places and military relics, surely this is a must. Plus, it’s one of the few USSR submarine bases where one could demagnetify one’s submarine – as you do. Because being stealthy is better than being spotted, right? 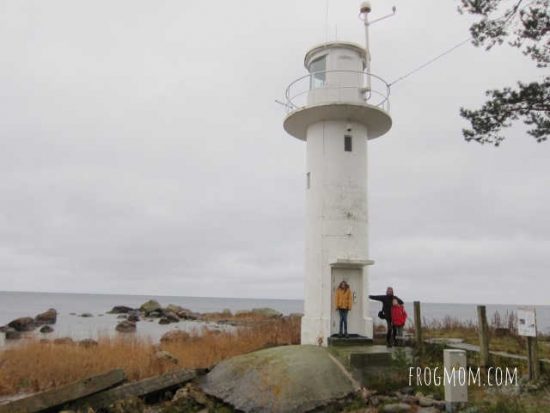 We had an amazing dinner at Viitna Korts, a historical Estonian tavern (not the cafe next door) with wooden trestle tables and windowless walls decorated with herbs and country crafts. 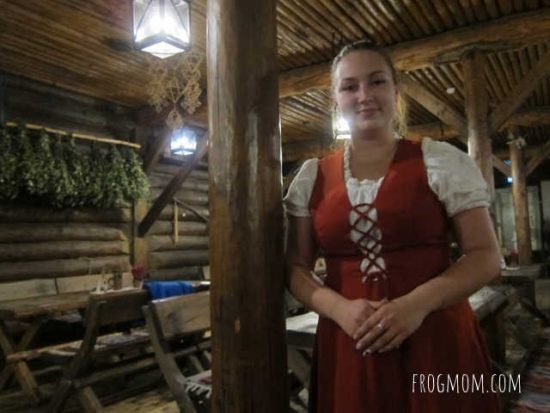 There, we ate the most delicious pelmenies in broth (traditional Estonian morel raviolis) listening to a Russian cover of Simon & Garfunkel’s The Sound of Music, as well as croquettes, a barley porridge and crepes with wild strawberry sauce. In this buikding the size of a barn, we were almost the only customers and it was absolutely fantastic – great service, food and decor.

We stayed two nights at Vihula Manor Country Club & Spa, a secluded manor part of an estate which dates from the 16th century, completely renovated to high standards. Breakfast was served in the main manor building (with a porridge to kill for), and we enjoyed the sauna in the carriage house.