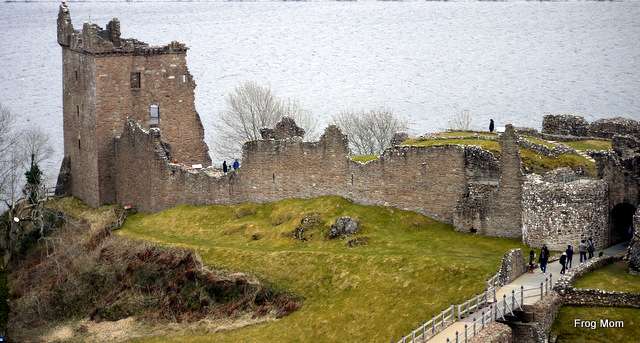 > Explore 6 Castles in Scotland with Kids

Explore 6 Castles in Scotland with Kids

Visiting Scotland with kids is a dream for nature, tartan and golf lovers but for most people, it all starts with haunted castles. For better or worse, Hollywood has made the castles in Scotland some of the most romantic castles in Europe and you would easily expect kilted clan chiefs walking out of their front doors in full war regalia with bagpipes a-piping on the draw bridge. The reality is slightly more subdued, but clans still exist (and thrive), tartan is sold in all villages, there might be ghosts at your B&B if you ask and you’ll probably hear bagpipes at some point. You’ll also experience Scotland’s infamous weather, an integral part of what makes the country so special. With our two girls, we channeled our inner Braveheart, Highlander, Outlander and Brave and set off to explore Scotland (with a rain jacket).

Here’s my shortlist of top historic castles in Scotland to see with children, a list that you can combine with 8 family outdoors adventures in Scotland and on Skye.

Easily the most famous castle of Scotland and an iconic world sight. With its stone arched bridge, amazing location on the water and strong medieval walls, Eilean Donan is a romantic dream come true. Featured in the movie Highlander and photographed to death by thousands of inspired fans, this castle is also a delight to visit with the young crew. Very child-friendly, the castle visit is very much alive and that makes a ton of difference in entertaining the young ones.

Start with the multimedia historical movie at the entrance, a quick presentation of the castle’s history with period characters projected on the walls. It’s right next to historical displays. Follow the tour to a series of inner courtyards leading to the reception rooms of the castle. If they don’t look dusty, it’s because the castle is still lived in and used by the MacRae clan for formal gatherings. Think about that in the banqueting hall, it’s pretty awesome. Escape outside to the narrow walls walk where the kids will enjoy views on the village and the estuary, before coming back to enjoy the kitchens, the Black Watch room, the scullery or the portcullis room.

If you’re hungry – and we were – the coffee shop offers simple cold and warm meals and their scones and cream are the bomb.

The largest castle in Scotland, Stirling Castle sits atop a hill overlooking the city of Stirling and the River Forth. Used by many kings and queens of Scotland, this military fortress is worth at least a half-day if not more of your time. To discover the castle, children can pick up a kids’ audioguide or chose to wander through the grounds. With the help of costumed performers (we saw Mary Queen of Scots) and helpful leaflets, the castle is brought to life and each room brings a wow moment. From the Royal Palace to the Great Hall or the Great Kitchens, there’s plenty to do. Fascinated, we spent almost an hour at the Tapestry weaving studio, learning about the ambitious project to recreate – by hand – Renaissance tapestries. Our girls’s favorite spot was the Palace Vaults, with lots of hands-on activities and games on medieval professions or activities.

Note that if the wall paintings look rather fresh on the walls, it’s normal. The castle was recently refurbished to bring it back to the splendor of Mary Queen of Scots.

An iconic ruined castle on the shores of Loch Ness, Urquhart Castle is an amazing photo opp for enthusiast visitors and Loch Ness monster amateurs. I admit that we had a hard time finding a parking and found the entrance fee steep, but if you visit Uhrquahrt Castle from Invernes, there’s a reliable bus service. Essentially, we were looking for Nessie and the hill above Urquhart Castle provided the best spot for breathtaking views of the loch. If your kids like to climb up and down and explore, Uhrquhart Castle has a lot to offer in terms of history and how Highland castles were used, but not much in terms of shelter should the weather turn wet.

The traditional stately home of the McLeod clan on the Isle of Skye is more than a fun castle to visit if you have children in your group. Besides the castle tour, the landscaped gardens (with many small bridges to cross) and loch-side views are what won my girls’ heart. Inside the castle, you’ll walk through rooms decorated with possessions of the MacLeod family, such as the legendary Fairy Flag – an heirloom of the MacLeod clan, letters by Walter Scott and Jacobite relics (Outlander fans, this is for you!). I particularly enjoyed a series of old photographs in the basement, depicting the traditional life of fishermen on the Isle of Skye. We didn’t have time to go on a seal tour, but I know my girls would have loved to. Instead, they ran around in the garden and had a blast despite the drizzle.

Do we have any Brave fans here? Because the story of Princess Merida is actually set at a time when bears roamed Scotland, when stone circles hosted pagan ceremonies and when people lived in fortified towers – Brochs – like the ones of Glenelg. Iron Age structures over 2,000 years old, the Brochs are fascinating and imposing relics of ancient Scotland. It doesn’t hurt that the Brochs are surrounded by beautiful scenery, rolling hills and ancient forest located in remote coastal areas. If you are an Outlander fan, you’ll recognize the word broch from Lallybroch, Jamie Fraser’s ancestral home.

To get there, we drove to Glenelg from the Isle of Skye and boarded a two-car ferry to cross the narrow channel that separates Skye from the mainland. The drive was gorgeously scenic and once we got there, our girls had an amazing time with local rangers making bows and arrows. You won’t see much at Dun Telve or Dun Troddan, the two brochs, they’re really ruins but you can take in the atmosphere and wander outside, imagining what life was like thanks to informative panels.

On the Clan MacDonald estate in south Skye, we found the most fascinating history of the islands that line the western borders of Scotland. The castle itself is only a shell, if a romantic one, and my girls spent an hour doing somersaults on the impeccably green lawn in front of the castle. That could be a draw, but the Museum of the Isles is the real star of this estate if you like history. Providing an amazing glimpse into a fierce world of vikings, island lords and sea conquests, the museum is worth a slow walk through to get an idea. Fans of Games of Thrones might even draw comparisons between these islands and the Iron Islands of the Seven Kingdoms – I wouldn’t be surprised.

Once you’ve had your history fill, go for a walk in the gardens. They’re lovely and my father enjoyed the wide alleys and beautiful views on the sea.

To Get to Scotland

You can fly easily into any of the big airports of Scotland (Edinburgh, Glasgow, Inverness, Aberdeen) but for a true adventure, you should try the night train with kids. It’s the Caledonian Sleeper train and leaves London in the evening to reach the Borders at dawn and big cities just in time for breakfast the next day. A must-do for train lovers!

This concludes the list for now, but do come back as I’ll update it with more castles as we keep exploring Scotland.

4 thoughts on “Explore 6 Castles in Scotland with Kids”