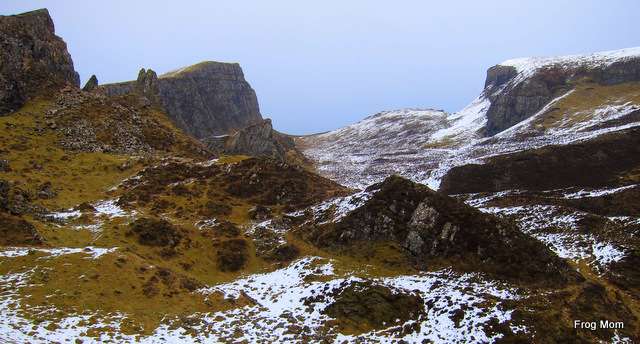 > Exploring Middle Earth on Skye with Children: The Quiraing

Exploring Middle Earth on Skye with Children: The Quiraing

By the looks of this fantastic Jurassic landscape carpeted in Scottish green grass, the Quiraing could be part of Middle Earth, the Lord of the Rings continent replete with large scale mountains, valleys and coasts bordered by the undying lands and the land of the dead. And yet the minute you step on the trail, you forget all about what the landscape could be to admire what it is. Otherworldly comes to mind, unique for sure, or just plain stunning. So stunning it’s a surprise you even remember to keep on walking! It’s even more surprising that this trail is so accessible for all ages, from children to grand-parents. We hiked around the Quiraing with my girls and my dad and despite the 5 miles, some snow and a few airy parts, the adventure was over too soon for our taste. If your kids like scrambling, climbing, running or sliding (down scree slopes), this walk’s for them – a must for any pint-size world explorer shortlist.

First, the name Quiraing. Like a lot of Scottish names, the pronunciation is impossible until a local says it – it sounds like queer-ang, with -ang as in fangs with a twang. Now that you got the pronunciation down, the other burning topic – geology! The Quiraing is a landslip – an area of Jurassic sedimentary rock that collapsed under the weight of giant lava flows, causing huge rocks to break along a 2-km long fault and glide towards the sea, rotating in the landslide. Yes I know, it sounds complicated but that’s perhaps the most beautiful landslide you’ll ever see so it’s worth knowing what happened. Now that we got that out of the way, on with the hike.

When I first read about the Quiraing in Country Walking‘s April 2013 issue on Treasure Islands, I dutifully tore off the page and stored it in a plastic sleeve for our trip to Skye. Reading it closer to the day, I found I wanted more detail to spot a few funny rock formations and side trails. The article and my 1:50,000 Ordnance Survey map #23 North Skye proved not detailed enough so we used an annotated 1:10,000 satellite view of the  area instead. It’s called  “10 Step Self Guided Walk through the Quiraing” and we found it at the Ellishadder Art Cafe.

From The Trailhead To The Prison

By mid-morning, we parked at the pass for the Quiraing trailhead under a heavy sky. Showers and/or wet snow might be in the cards, we didn’t know. While we were getting my girls’ gear sorted out, my dad walked over to a metal plaque. “They talk about The Lord of the Rings!” he said. I went over too. Indeed, the landscape was described as being similar as to that of Middle Earth. Such a reference bode well for the hike, even if it didn’t mean much for my young girls yet.

With full packs on our backs, we made for the trail right across from the parking area at the pass. Clearly marked and signed for Flodigarry, it headed north-east through flat moorland towards rocky pillars. Within minutes, we were on a narrow dirt path skirting the outline of the mountainous ridge. No place for cartwheels, it was single file or drop with the sheep. I followed my 7-year old and roughly 10 minutes in, reached The Wet Step. This small gully had a weird narrow rocky section and a hairpin turn where I had to trust my boots and just hop on over the rock to safety above a 6-foot drop.

Less than a mile away from the trailhead, we reached a rocky outcrop with terraced grassy slopes and decided to drop our bags for an early lunch and some play time (for my girls). Sheltered from the wind, comfortable and dry, this awesome spot invited both bird-gazing and grass-napping but for my girls, it also meant active bouldering and rock jumping. With our stomachs happy, we picked up our bags for a section that looked tricky to me – it was going to be seriously steep. As we reached a small rock pyramid, we had The Prison on our right, The Needle on our left.

To The Needle and The Table

From the pyramid, most people turned left and attempted the steep climb to reach The Needle, straight up an earthy slope without much to hold onto. Our guide map suggested a more gradual route to the left also, but along a snaking path up to the cliff base. Alas vertigo got the better of me and I bailed out, along with my 7-year-old who decided she’d stick with her mom and slide down the slope on her butt.

My 9-year old, my husband and my dad reached the cliff base and then walked straight to the Needle. From what I understand, hell of a view but it’s dizzyingly steep looking down. From there, they set out to find The Table. Within the Quinraing’s landslip are several odd rock formations including The Table, an elevated hidden plateau the size of a football field once used to conceal cattle from Viking raiders. I almost cried when I realized I wouldn’t be going up there because I knew scenes of Highlander had been shot there and it sounded quite breathtaking.

Frustrated by my vertigo, I decided I’d take a second shot at The Needle and undertook the “straight up” climb. However a third of the way through, a blond woman came down and delivered a message from my husband: “Do not climb. There’s a lot of snow up there. They’re coming down.” A part of me was relieved. They were not going up after all. I slid down the slope – again – and with my little one, we scrambled up The Prison for fun until we were all reunited.

Too bad Table, some other time.

Most visitors turned back at The Prison to retrace their steps but we wanted to see the top of the summit so we kept going on the same path. Walking under the overhanging cliff, we saw the grassy slopes and hills turn white with snow as that side was probably less exposed to the sun. We passed along the small Loch Fada, a small pond surrounded by snow. After some going down, the path leveled up and went up again. We were soon reaching our turnaround point, the lowest point of the Quiraing’s mighty “shield”.

At the pass we went over a style and turned around to doubleback. Time to hit the summit!

This side of the mountain was completely snowed-in. The sky was so dark that the area had a gloom-and-doom feeling. Had this been in The Game of Thrones, you’d know that winter was coming. I said a silent prayer for fair weather because by now we were on our own. No other travelers had ventured this far and a snowstorm would not be welcome without proper gear. Though we could follow footsteps on the hill, we would be by ourselves.

For scenic purposes, our path followed the cliff edge – which made me nervous at times – and allowed great views of the coast and mountain range. The snow got deeper and soon we were carving steps in icy patches with our hiking boots, trying to find the best footing at each step. It started snowing. My dad slipped twice, my 9-year old once, and the hill looked like it would never end. This snowy uphill walk was not easy! Each time I thought we were cresting the ridge, another formidable fold presented itself and I yelled to the ones behind, “It’s going to be the next ridge!” hoping I’d be right.

What a tricky landslip this is. Finally the slope got easier. The ground got flatter and we reached a rocky cairn marking the summit. We made it!

Back To The Trailhead

Next to the summit, the cliff edge presented some breaks through which we were able to glimpse The Table – from above. What had seemed impossibly high earlier on the trail stood now hundreds of feet below us. I dared not get closer to the edge – it’s deceptively round and any drop would be fatal – but it all seemed very high to me.

From there, we had a full view on the other hills of the Trotternish Ridge that go up the peninsula almost until the northern tip. What a view! The path was less obvious then but we did as before, skirting the edges of the cliff until we found a clearer path that went down the hill in successive drops. The last part of the hike was closer to running than walking downhill and my girls had a lot of fun skipping, jumping and racing each other.

Including the slow-going on snow and lunch stop, the hike took us 5 hours. That evening, we spent a lot of time looking at our pictures in awe. That’s one hike I’d do again in a heartbeat – in any weather.

2 thoughts on “Exploring Middle Earth on Skye with Children: The Quiraing”