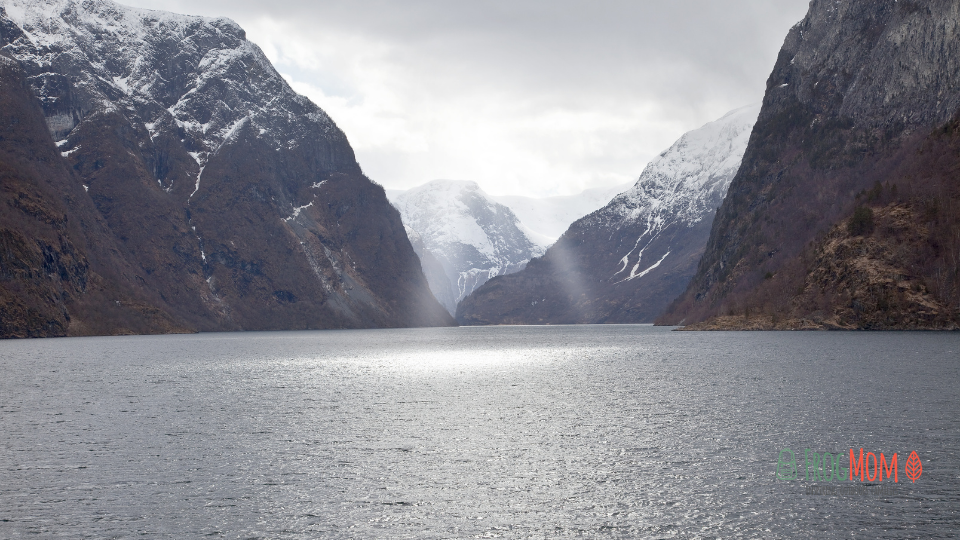 Have you ever boarded a train past troll-magnet cascading waterfalls to a Norwegian fjord? We did and it was a fantastic way to explore Sognefjord, the largest and deepest fjord in Norway.

At twilight on the water, our ferry turned the corner of a wide fjord and by sheer nature magic, another fjord opened up – revealing snowy mountains falling into the sea. One after the other, their steep mountainsides plunged dramatically into dark waters, and again further in the fjord, and again until the last mountainside faded away in the mist. As if the scenery weren’t enough, our trip gave us the opportunity to taste a Smörgåsbord of slow travel options in Norway – from modern train to scenic train, from fjord ferry to intercity bus, it was a Richard Scarry book brought to life.

Let me give me the slow travel version, local folklore and all.

When we booked our fjord exploration day with Norway in a Nutshell, we received a bunch of transport tickets. Our first train departed at 7.58am and we showed up early at the Bergen train station, candidly looking for some guy with a red flag or a funky commercial jacket. When you book a “tour”, it usually comes with a tacky tour guide. Or not, in that case.

When our train platform appeared on the train departure boards, we realized that our day was going to be a self-guided tour. We had the tickets. We were grown-ups. We were free! Free to board the right types of transportation at the right time.

The first train between Bergen and Myrda was so nice, it could have been a poster child for Scandinavian trains.

Large comfy seats, tons of leg room, dedicated family car for kids to play in, futurist-looking bar, clean and spacious restrooms, and low noise levels. I mean, it beat most trains I’d been on.

During the 2-hour train ride, I alternated playing with my chatty 8-year old – my 10-year-old was reading a book and was therefore absent in spirit, watching rain drops lash at the train’s windows, and exploring the train. Without the incessant monologue of my Little Miss Chatterbox, I might even have dozed off.

In Myrda, we checked our next tickets. Flåmsbana, what was that supposed to mean? Pulling together our meager Dutch and German skills plus a few signs at the station, we figured it out. Flåmsbana – bana = similar to Bahn in German, often used for trains, Flam = no clue. Turned out it was a scenic train to Flam. And what a train!

It looked so vintage that I thought it was a 1940s train until I found out it was a new train with “old fashioned” interior design.

Nice Scandinavian nostalgic touch, there. Besides the aesthetics, the point of the Flåmsbana was the steep mountainsides, the twenty tunnels, the steep track grades and the viewing platforms.

One such platform was just big enough for all the train riders to elbow each other in front of a metal fence for a nice photo below Kjosfossen falls.

That thundering waterfall is associated in local folklore with “Huldra,” a female troll similar to the sirens of old Greek mythology. She lured men by singing beautiful songs on top of the waterfall and by showing off her stunning beauty. However she was just an ugly mean troll and once the men had fallen for her, she killed them without mercy. Possibly had them for dinner. Typical troll stuff.

Past the falls, the train climbed up the mountain at impressively steep grades until we reached the anticlimactic city of Flam. Honestly at first sight, it was barely more than a train station and a few stores in the middle of nowhere on the shores of a lake. Where were the quaint buildings, the goat herders and the Viking granddads with snowflake knits? Between you and I, I suspect the locals hid the actual village somewhere else. But that’s ok, we did find Flam’s charming side later.

As it rained quite heavily, most of the tourists took shelter in the best tourist trap within 100 yards – the souvenir shop at the train station. I’ll say, it was tempting.

The rain had eased off and the path looked straightforward. In hindsight, getting out was the best thing we could do with our free time. The crisp mountain air filled our lungs as soon as we reached the narrow countryside road leading to the falls, past apple orchards, green fields and tidy painted red farms.

Leaving the paved road a little ways further, the trail became a muddy path up the mountain. In front of the trail sign, a happy herd of Highland cows. How did I know they were a Scottish breed? I didn’t. The farmer stepped out of the field as we arrived to tell us about his cattle. He raved about his Highland cattle, so perfectly acclimated to Norway and how they would need winter feed at the first snow of the season the following week.

However, we needed to move on and said goodbye. I hope the guy had a good laugh looking at my shoes as we opened the gate. Whereas both my girls were wearing rain boots, I was woefully unprepared with my regular city walking shoes. Well, nothing could be done about that so I just sucked it up and stepped in the squishy mud – carefully at first, rather carelessly after I saw more mud than leather on my shoes. Let’s just say that the hike was a slip-and-slide affair.

My pants – and my 10-year old’s – didn’t survive the experience and neither did my jacket when I went whoosh in a nice puddle at the top. Oh, I was so grumpy and muddy. “It could have been worse,” commented my husband. Wait, what? “It could have been cow dung.” Around us, those were indeed massive. That cracked up my 8-year old and though it didn’t make my pants any less wet or dirty, it did make me laugh.

In good spirits, we admired the beautiful waterfall and went down the mountain in more slip-and-slide instalments that I care to recount.

Finally, we returned to the train station where we hit the souvenir shop. A snowflake knit sweater later, we were inside the local hotel lobby’s having some delicious apple cake and hot tea.

Waiting for the ferry, I quizzed the barmaid on a topic I was getting intrigued about – local trolls. The shop guy had mentioned them, troll calendars were everywhere – I had to find out more. That’s how I learned about the huldra. She also told me about the Norwegian traditional costumes, the Bunad.

There were two displayed in the hotel lobby and when I asked her if she owned one she said oh yes, but hers was different. In fact, her village’s Bunads were different from the neighboring valley and also from other villages. Apparently, you could tell where a girl came from in Norway by her Bunad. Talk about extreme regionalism.

At 3.30pm, we stepped aboard the ferry with a group of Japanese tourists. I talked with an older man whose jetlagged wife slept the whole  fjord through. They were doing Northern Europe in 10 days – Iceland, Norway, Finland, Sweden. I admired that they chose late October and its iffy weather for such cold countries. Some were shivering in city clothes and others stayed huddled inside the main cabin under fleece throws. They didn’t seem to mind though. “It’s beautiful here,” the man said. How true.

Outside on the upper deck, the wind whipped at our faces as the ferry navigated the calm waters of the fjord. You have to realize one thing. At 3.30pm in Sweden in late October, it’s practically the end of the day. Within an hour, the sky darkened and by the time we approached the last port, the warm glow of lights on the shore indicated isolated farms getting ready for dinner on shore.

Some of these could only be reached by boats – no roads. How did these people live through the winter? What about emergencies? I wondered. Now that is the kind of life where you better get along with your neighbors up the fjord.

At 6pm in full darkness, we disembarked and were faced with a tough choice. We were supposed to find a bus to take us back to Voss where we’d board a last train to Bergen. Which bus was it? There were three, two nicer sleek white coaches and a darker less fancy bus. We thought it would probably be the one, the intercity bus. We joined the Japanese group to the bus and got in a rugby-style I-was-here-first line. Ironically, the bus driver wasn’t in and once he showed up – a full 20 minutes later and way after the other buses had departed – he didn’t open the doors. He drove away to the actual bus stop, 100 yards further. New stampede!

Phew. Finally, we got on the bus where the girls were super happy to have front row seats so they could buckle up their bus seat belts. The last train of the day was a no-thrills affair, rickety and noisy but it got us to Bergen.

We were exhausted. Exploring the fjords as a day trip is doable but it takes commitment. Blast on some Wagner music and raise a toast to Norwegian fjords!

Timeline of a Day to Sognefjord via Trail, Ferry and Bus