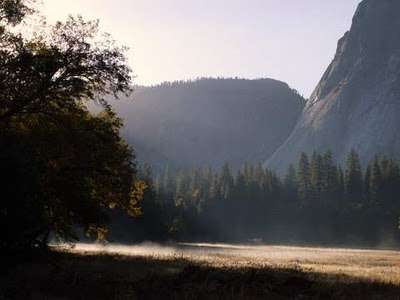 Catching the tail end of Fall in Yosemite Valley is a wild weather roll of the dice. You can enjoy California’s warm Indian summer and winter’s rains in a couple days, just before snow storms pound the Sierras. That’s what we got and exactly why I love that time of the year – it’s so unpredictable. 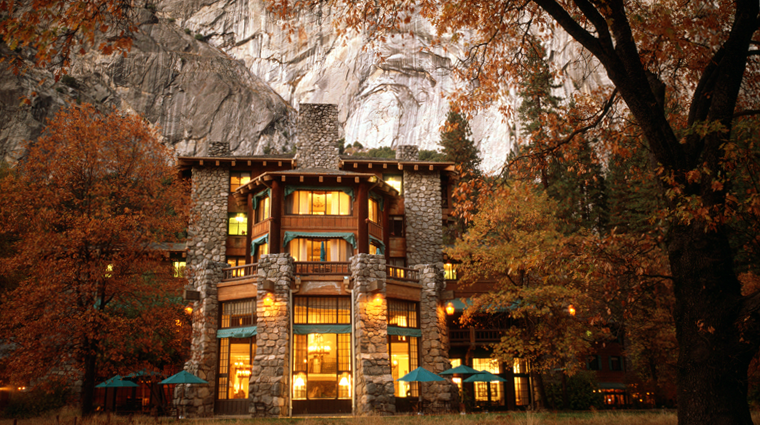 When I planned this trip back in September for my family (mother, husband, kids 5 and 7), I wasn’t sure whether the valley would be snowed in or not. In terms of lodging, that could change a lot of things for everybody’s comfort. I came up with a practical compromise: my husband and I would stay at the Upper Pines campground and my mother and my girls would stay at the Majestic Hotel (formerly, Ahwahnee Hotel). I just love that hotel, such grand architecture.

We left the Bay Area at 2pm and arrived at the entrance of Yosemite Valley at twillight on Friday. As we drove between thick stands of alders, big leaf maples and black oaks, darkness engulfed the road and our hopes of pitching our tent in daylight too. As it turned out, our campsite was so crappy and narrow anyway that we had just enough space for a tent (#106, for the record).

After we checked in the rest of the family at their “rustic” cottage, we sat in the cozy walk-in fireplaces of the beautiful Ahwanee Hotel (as it was called, then), relaxing and looking forward to enjoying the colors of fall in Yosemite Valley the next day. 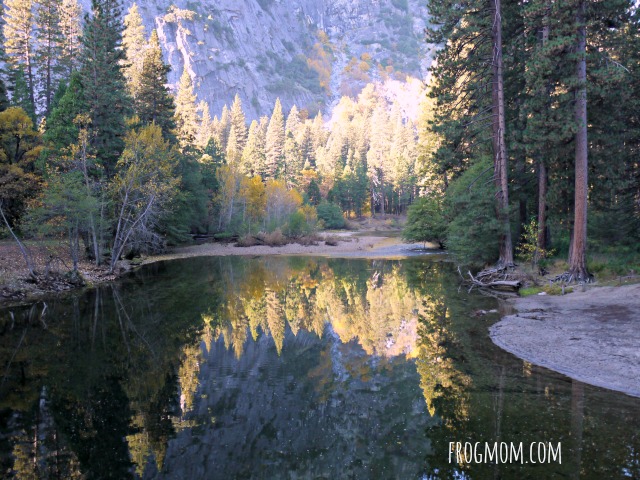 After a noisy night (frat party as neighbors), we drove over to the Ahwahnee and caught the tranquil reflection of trees in the Merced River. It was as perfect as a Vermeer painting and we jumped out of the car to capture the image before a jumping trout created ripples. 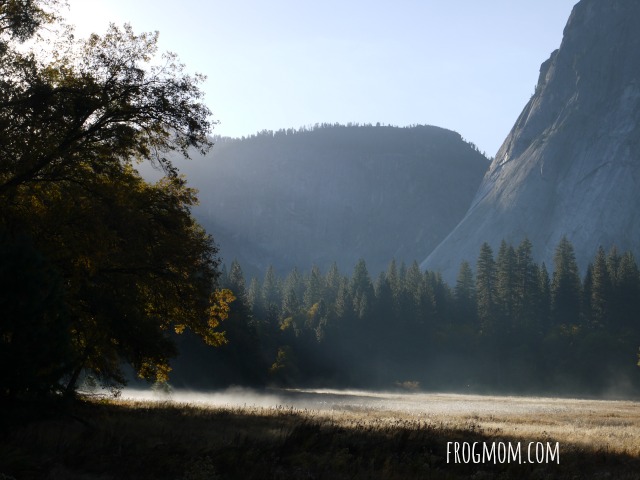 Nearer Yosemite Village, a fuzzy fog fleeted above Indian Canyon Creek meadows while a shy sun and clear skies announced a glorious morning. The stars were well aligned for a great day out. 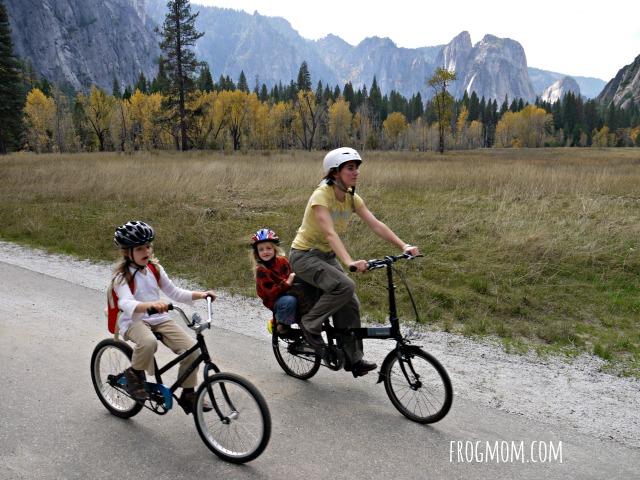 In terms of activities, we were limited by my mother’s recent hip surgery. Still recovering, she couldn’t walk more a mile, maybe 1.5 miles, over flat terrain. That ruled out any upwards rocky trails or steps but opened up vast scenic possibilities. We parked at Yosemite Lodge at the Falls and rented bicycles there. For my mother, that was short-lived since she hadn’t ridden in 30 years. She cursed and couldn’t reach the pedals, her knee refusing to bend. Eventually, I returned her bike.

After a quick look at the Yosemite Valley trail map, we opted for the easiest trail  across the lodge, along the river on a paved path towards the swinging bridge. It is my favorite discovery trail, as you follow a tree-lined winding path until views open up on Leidig Meadow, and keep on to Swinging Bridge where a little sandy cove offers a perfect splash spot for kids (and ducks). 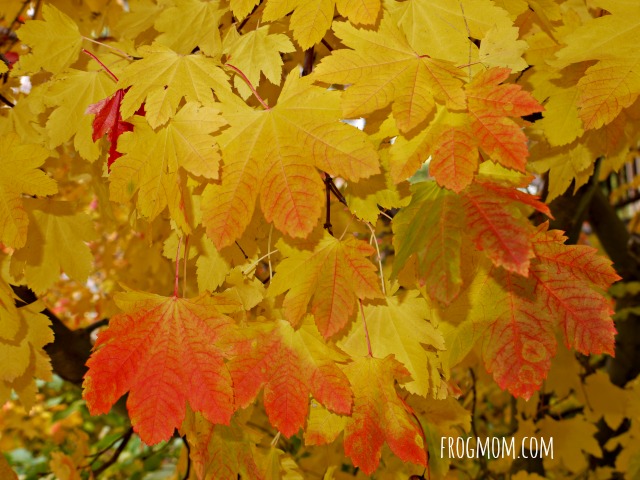 The fall colors were amazing. Every step was as potential photo op for non-believers in the gospel of autumn foliage in California. If you want to know where to find fall colors in California, check out a website called Fall Color in California. You will find visitor reports of fall colors with exact locations, dates and photos. I read there a report about a magnificent big leaf maple tree by the chapel in the Yosemite Valley so this was our destination today.

When we arrived at the meadows, we spotted an impressive line-up of professional photographers capturing the valley, all geared out with tripods and gigantic lenses. If anything, this confirmed that it was definitely a good weekend to be around. We admired the view and found a comfortable stump for my mother to sit on, while the girls rushed to the river to build sand castles. Once, I even found an arrowhead along the edge. 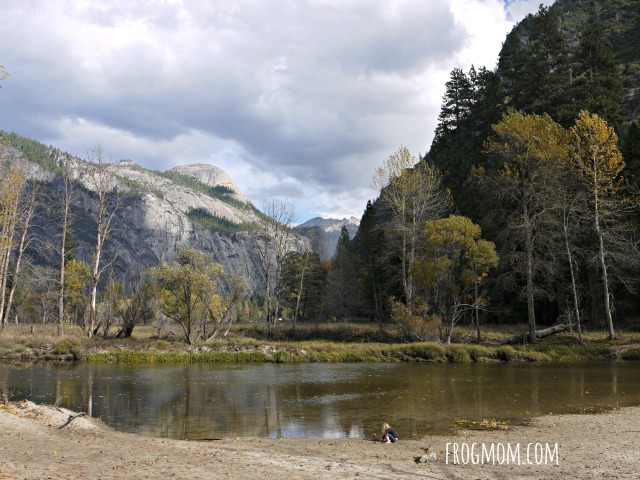 Imperceptibly, outside temps had dropped and skies darkened. Vivid gusts of wind shook the trees and much to our delight, they shook the trees until tempests of yellow leaves literally rained on the river in slow motion. Light and unaware of the weather change, the leaves blew with the pre-rain puffs and blanketed the shores of the river in golden hues of yellow. It was absolutely gorgeous and we couldn’t get enough of it. 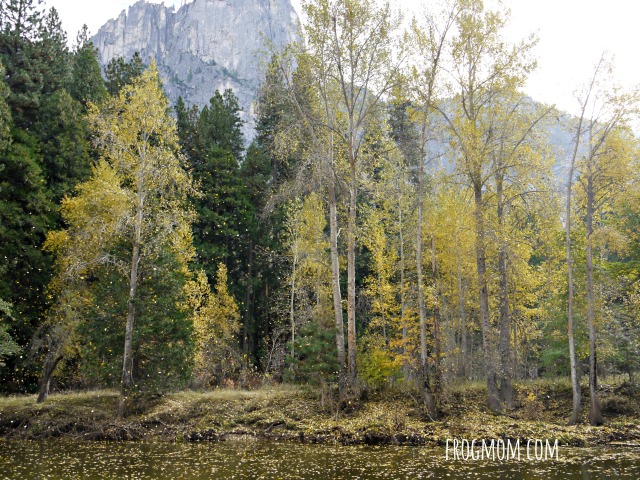 However, it was clear that rain would be upon us fairly soon so while my mother rested by the bridge, our little family hopped on bikes to go find the Yosemite chapel. With its tall frame, wooden beams and shingle roof, the oldest structure of the valley could be a distant cousin of Scandinavian stave churches. Quaint and surrounded by tall granite walls, it is the site of many wedding ceremonies. 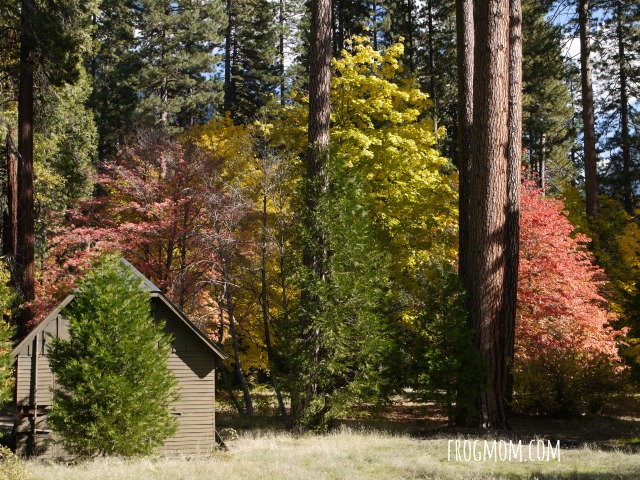 Yes, the big leaf maple tree was there but we had seen more impressive ones by the Yosemite Falls so we turned around and rode back to Yosemite Lodge. By then, it was about 2pm and our girls were in dire need of quiet time. I left them with my mother to rest in their bedroom and took off with my husband. I wanted to see the valley from above to admire the Fall colors and the only trail I kew for that was Upper Yosemite Falls trail.

This iconic Yosemite Valley hiking trail is also one of the oldest (it was built from 1873 to 1877) trails and rises 2,700 feet over 3.6 miles. With our late start, we knew that we wouldn’t get to the top if we wanted to return before dark. However, we aimed for half of the trail, figuring we’d be way above the treeline with nice views of the valley. Our expectations were not disappointed. 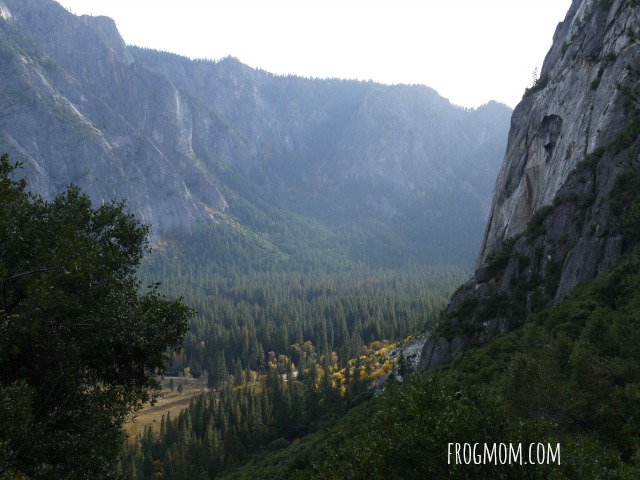 In Tom Stienstra’s words, this hike is a demanding climb. You bet! Both on the way up and down, we passed people holding their crooked backs or panting against rocks. Granted, some were poorly outfitted with flips-flops but most had good running shoes – which still doesn’t beat real hiking boots. The trail is comparable to a never-ending staircase with flat respites on loose gravel.

During the first 1.2 miles, it’s switchback after switchback until you surface on a hard slab at Columbia Rock. By the railing above the vertiginous drop (1,200 vertical feet above the valley), it’s a good idea to take a picture just to show you were there. We obliged, followed a flat stretch  and kept on until the trail dipped to a portion with views on the face of Upper Yosemite Falls. There are no words to describe such natural beauty except that you feel ridiculously small and vulnerable.

From the trail, we could follow the setting sun’s shadows stretching farther in the valley and dark heavy clouds progressing in our direction. We still had an hour of daylight so turned around but of course, what we thought would happen happened. It started raining. Not hard, mind you, but a healthy soak nonetheless and it felt incredibly refreshing. Clever me, I was in short-sleeves and had left all other layers in the car. Since we had almost ran up the trail, I was still warm enough that I didn’t get cold at all. 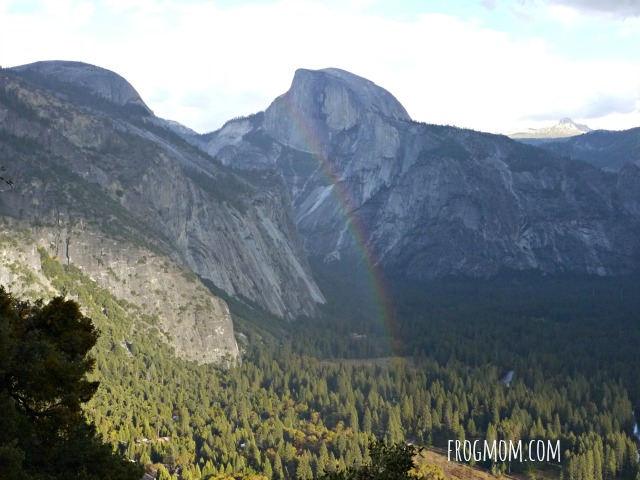 My husband was giddy with excitement for a different reason. He changed the lens on his camera and kept peeking left to catch a rainbow if any should appear. At a turn of the trail, the most beautiful surprise of the day awaited us: a giant rainbow sliced Half Dome in the middle, diving straight down to the valley’s trails. We could see exactly where the pot of gold was buried. 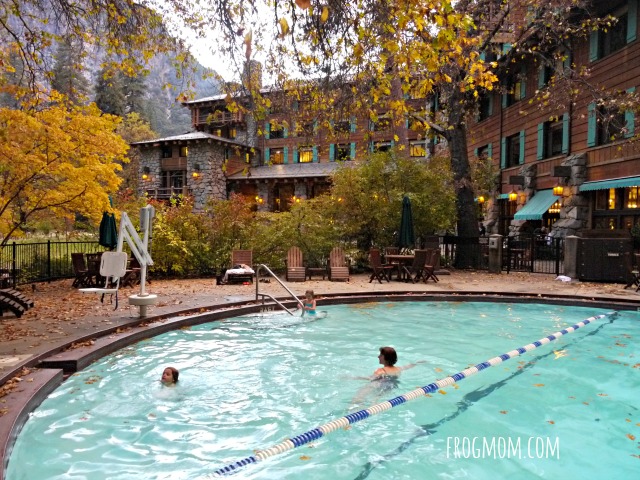 We finished the day with a nice soak in the Ahwahnee’s pool and went for a delicious dinner in the vaulted dining room. 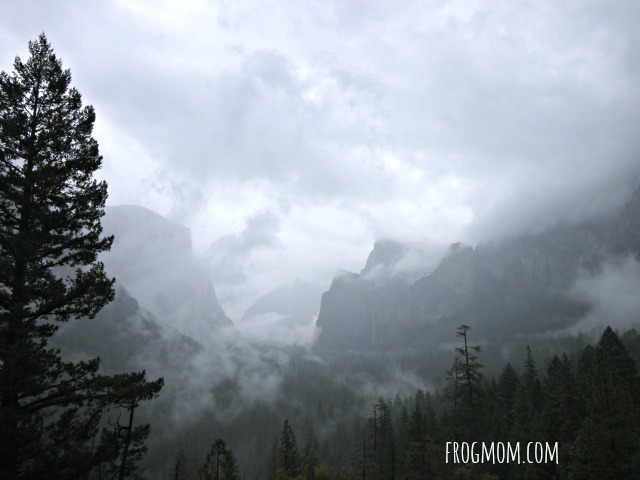 Heavy rains and black clouds came on Sunday morning, turning Yosemite Valley into a moody Ansel Adams picture. By the time we’d finished brunch at the Ahwahnee, the sky was so dark that we decided to leave early and drive back home.

I hope this has shown that if you’re ready for any type of weather, Fall in Yosemite Valley is truly a great season to visit as all summer crowds have gone and deciduous trees put on their best show of colors.

3 thoughts on “Fall in Yosemite Valley”