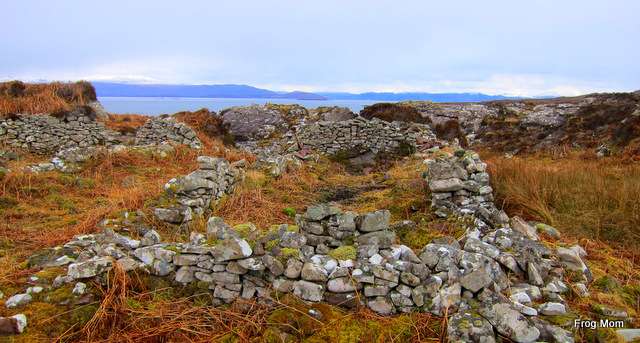 > Hiking Across the Isle of Scalpay to a Viking Village

Hiking Across the Isle of Scalpay to a Viking Village

Vikings in Scotland? You bet. Due its proximity with Norway, the northern part of Scotland experienced major Viking and Norse influence from the 8th to the 15th century. No wonder then that on a recent trip to Skye and the Isle of Scalpay, we came across not only Viking names but Viking remains. Though it would be fun to picture helmet-wearing warriors strolling grassy paths between thatched farmhouses and cross slabs engraved with runes, reality is more subdued and tainted with the passage of time. During our April break, we hiked 10 miles across the Isle of Scalpay to the ruins of a Viking village and loved it.

Scalpay is a small private island featuring 2483 acres of wild Scottish moors, hills, coves, lochs and caves off the north-east coast of the Isle of Skye. Yes, private as in Scottish Robinson Crusoe far from busy roads and tourist buses – with rental cottages to boot. How’s that for an adventure?

From Scalpay Harbor to Loch a’ Mhuilinn

The morning of the hike, I was briefed by the owners of the island, Veronica and Michael. With a laminated topo map of the island, they showed me how we would be going up the only existing trail to three lochs at the top of the island. There, we would find a loch-side hut for our picnic lunch. Past the end of the trail, we were to follow the lochs and – maybe, drought-depending – find a waterfall off the northern tip of Loch an Leoid. Then we’d find a valley carved by a stream and walking straight, hit the coast and head East to our end destination – the Viking village. All good!

We laced up their hiking boots or put our rainboots and got on the way. Walking past the Georgian house and onto the Lochs Trail, we crossed a small evergreen forest, up and over two bridges and once out in the open, reached the Deer Fence. In an effort to prevent Red Deer from eating all newly-planted trees, Michael and Veronica set up a tall fence that runs all the length of the island. We keyed in the 4-digit code in the lock and entered deer territory- which my dad was very excited about because he wanted to see wild deer.

Walking at a good pace, we reached Loch a’ Mhuilinn (1 mile, 240m/790ft elev gain) in about an hour. Apparently that’s the standard hike for most guests staying at the cottages.  What a surprise it was to coast the last hill before leveling off and discover a wide silver-gray lake with a little hut and a boat. My soil-scientist dad immediately remarked on the glacial lakes formation and the sandstones. I did a little digging and for geologists out there, Scalpay is  a unique ancient landscape whose rocks – north-west dipping sandstones of the Torridon Group – are roughly 1000 million years old. If you wonder, that’s before animals even appeared on earth. Didn’t look that way for us rock-savages but knowing it now makes it kinda special.

Considering the beautiful loch, we pulled up the hood of our jackets. Snowflakes started falling hard just then and the scenery became magically wintry. My girls noticed a half-decaying wooden boat on the loch and we took turns standing on its watery skeleton, wondering if we’d end up sinking through or not. Snow fell harder now, one thing to do – to the hut! The circular hut was a welcome shelter from an unseasonal April snowfall. Inside, we sat on benches arranged around a fire pit, regretting that we didn’t have wood to roast marshmallows or sausages. We had our picnic watching the snow get heavier through the glass door, and the brown heath carpet become whiter.

After lunch, the real adventure begun. We had 8 miles to navigate in unknown territory and a Viking village to find.

From Loch a’ Mhuilinn to the Viking Village

We arrived easily at the tip of Loch an Leiod and found the waterfall without too many zigzags. Despite the winter drought, it was trickling down a cliff face in pale white ribbons and we got a good view from the opposing hill. We even saw two deer scamper away, fulfilling my dad’s wish for the day and making my girls grab our binoculars to look for more on top of a hill.

After the waterfall, we shot straight for the coast rather than try to find the valley and the stream. Since there were no rivers to ford, we’d be treading on mostly dry ground – note the mostly dry, it’s Scotland we’re taking about. Orienting our map with an old school compass to point north (click here if you want to teach children how to read a map), we figured we needed to follow a 45-angle NW course over 3 miles.

The lower we got, the boggier the terrain became. If you don’t speak Scottish hiking, boggy means wet spongy moss and peat ground with water-filled ditches prone to swallowing boots without notice. Sounds like great fun, eh? Using the clear outline of the coast and the map as our guides, we came about the first wall of  the Viking village around 2pm. We made it!

Scalpay’s Viking village is a series of house foundations evidenced by 3- to 4-foot high walls in open moorland on the coast. Using Google Earth I determined that the most eastern walls are 150 meters East of the mouth of the stream that takes its source on SitheanGlac an Ime – that’s for you hiking geeks. Now we were lucky that during our spring visit the walls were clearly visible because later in the year, vegetation takes over and the ruins are easy to miss. Without a precise guide to the village, we literally discovered it as we walked, house by house and wall by wall. Oh the settlement was big, much bigger than we had anticipated.

Judging by the size and location of the structures, we tried to guess which ones were regular family houses, the clan hall or the church, the coastal lookouts or the barns for cattle. From what we could see, the village would have been built as a single row of houses on either side of a path parallel to the coast. According to typical Norse village custom, the village was built on a hill next to a stream and around a cove, providing easy access to fresh water and a natural harbor for fishing boats. Sounds perfect for your Viking settler, doesn’t it? As we walked West to find the creek to come back up the mountain, we found more houses closer to the cove and spent some time walking on the sandy beach. There were even sea caves on the bluffs. How fun this was! Even more fun, Yoda would say, if archaeologists could dig a bit. Then more about that settlement find out we would and better picture the village we’d be able to.

Back to Scalpay Harbor

An hour later it was time to head back. Since we’d just crossed the island SE by NW, we thought it’d be a piece of cake to retrace our steps along a similar route backwards but hey, what did we know about moorland navigation? It’s one thing to look down on a coast and aim for a point feeling like Columbus on the Santa Maria but quite another to go up a hill and aim for a moor that looks like the moor next door. That, my friends, is utterly disorienting.

Of course initially we did find the creek by the coast  but after 50 feet or so, the creek split in two branches and neither looked like a worthy candidate to find a canyon upstream. Again we decided to wing it and cross the moorland towards the highest peak we could see, hoping it would lead us to the lochs. Suffice to say that going up was grueling and I am forever grateful that my girls neither complained nor stopped along the way. It was tough and boggy and wet and sometimes it felt like we were making no progress at all.

Eventually we reached the peak but got the peak wrong – hiking shit happens, that’s why it’s an adventure – and the ascent was so steep we were all puffing and huffing. Tired, my girls just wanted to go home and so did we. Finally the hill leveled off and we found a lovely loch on a high plateau surrounded by peaks. And another loch. We looked at the map.

So that’s where we were?

Goodie! Elated to know we’d be home soon, my girls started playing games and telling each other goofy stories. They weren’t even hiking with us. In fact from that moment on, they kept chatting and exchanging jokes until the end of the hike, completely independent from us. Mind over matter, people, keep up the good spirit on tough hikes !Since the lochs were at the base of a wide basin-type landscape, my husband and I went for the higher points and my girls and dad followed a level line along the lochs.

We did it! An hour later, we were back.

If you want to visit by Scalpay Viking Village by land from Scalpay Harbor:

If you want to visit the Viking village by sea: