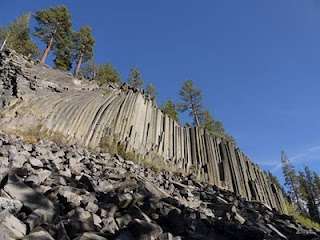 Devils Postpile National Monument is a great family destination combining geological wonders, easy trails and scenic falls in the Eastern Sierras. Plus, if you hustle up, you get to pick a special cookie at Schat’s Bakery or a gelato downtown after the hike. Kids, what’s not to like?

First, the basics. To get there, drive over and through the Yosemite’s high country (or Tahoe if Highway 120 is closed), drive south past Mono Lake and west towards Mammoth Lakes. We camped over June Lake at Oh! Ridge (no kidding) campground, a beautiful spot with breathtaking views. The June Lake/SilverLake/Mammoth Lakes area has tons of other lodging options.

We reached Devils Postpile after a long and snaky road down a valley, with the mighty Minarets towering above. The last time we were there in July 2004, our oldest daughter was 9 months old and Agnew Meadows where we camped was infested with mosquitoes. By going there in October this year, we beat the mosquitoes thanks to cold nights and were able to introduce our kids and friends to this magical place. The great thing about Devils Postpile is that the hiking is really easy – almost no elevation gain, just about 3.7 miles and the most beautiful trails.

We started at the Rainbow Falls trailhead and picknicked on a table before hitting the trail. In early October we were hoping for fall colors but the alders were just shy of turning golden and most slopes were still silver green with sagebrush. The part we crossed to get to the falls was a tree cemetery, surrealistic testimony to a 1992 forest fire dubbed the Rainbow Fire that swept through the entire area. As a result, empty tree shells and calcinated stumps dot the slopes until the river and it does feel like walking through a museum.

Around 0.7 mile, the trail merges with the trail to Devils Postpile along the middle fork of the San Joaquin river. Now we were in typical eastern sierras scenery: red firs, quaking aspens, black cottonwood, and sapphire blue waters. Whichever way you slice it, the eastern sierras are still my absolute favorite mountains.

The falls were 0.6 mile further, a raging water sight dropping a vertical 100 feet in the river. If you go there in the afternoon, watch for a rainbow spectrum created by the sun on the fine water particles floating in the air. We were amazed that the falls were so full, after the long and dry summer. We expected a trickle and got treated to a a full-on show. Pretty neat. There is a tiny trail with steps leading to the base of the falls if you really want to get wet but we decided to stay on the viewing platform where it’s dry.

From there, our party of 8 separated into two groups. A first group with the two youngest kids walked back to the car to drive to the ranger station and hike the 0.4 mile to the Devils Postpile. I went with our friend Michael and the two older kids on the trail to Devils Postpile, a pleasant 2.4 mile walk.

We took a bottle of water with us and hit it. Whereas my 7-year old dragged her feet, the other boy used the trail as a paratrooper training course, jumping on trees, going off trail and running every slope. Now that’s a happy hiker!

We stumbled upon a giant fallen tree and Michael, quite the daredevil, ran to inch his way to the extremity hanging over the trail. Look it, he made it! Then he told his son join him and junior paratrooper came. Then, ah then he told his son to stay put and ran down to take a photo. That’s when a couple of hikers walked by us and rolled their eyes in disapproval because “only crazy parents would send their kids up a big tree for a photo op.” Obviously I sent my girl too and did the same. In the end, nobody broke any legs and we carried on with our hiking business. Don’t think we were careless parents though. We were wise enough to tell the kids that if they should fall, they had better shoot for the base of the tree where the ground was softer and higher so as to make the best of a bad situation.

After walking along the gorgeous San Joaquin river, we finally reached Devils Postpile and took the trail to the top of the volcanic phenomenon. Admiring it from the top truly has a different flavor from viewing it from down below (which 90% of people do, since the trail from the ranger station arrives at the base of Devils Postpile).

The top looks like a neat arrangement of hexagons, which are in fact the top of the columns polished by glacial ice. This basalt formation resulted from a volcanic eruption whee the lava cooled, contracted and cracked, forming vertical and hexagonal columns. From the base, it looks like a slanted wall with a slew of broken columns that fell with the passage of time. From the edge of the roof, it’s hard to take in the exact dimension of the columns but the chaos at the base is pretty impressive.

We snapped a few more shots, walked down to the base, met the young’uns and walked back to the cars. We were ecstatic that the weather had been so nice when two days earlier the area had been slammed by a snow storm. More on that on the next Frog Mom post…