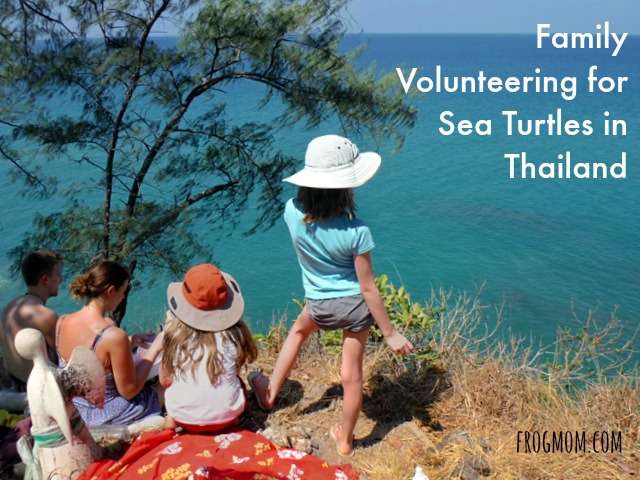 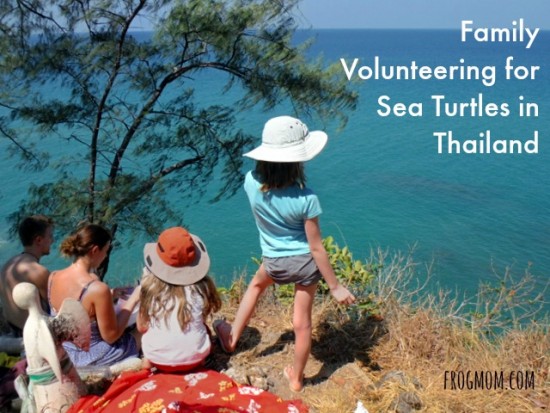 Two years ago, I took my girls to Thailand on vacation and looked for family volunteering opportunities in the southern islands. My goal was to find a family volunteering opportunity that would make a difference, something that’s quite tricky to find with children. My daughters were 10 and 8 at the time. Fortunately, I found Naucrates, a conservation nonprofit that monitors a Sea Turtle Project on Kho Phra Thong, an island in Thailand’s northern Andaman coast. That island was far enough from hyper-commercial Phuket to be well preserved and close enough to Mu Ko Surin, a marine national park, that we would be able to go snorkeling for fun on the same trip. Excited, I contacted Monica Aureggi, Sea Turtle Project supervisor and marine biologist, to explain our project and three months later, we landed in Phuket, looking forward to volunteering for sea turtles.

This is a brief report of our experience, showing you the highlights and what we did. If you love sea turtles and are looking for a family volunteering experience abroad, read this. 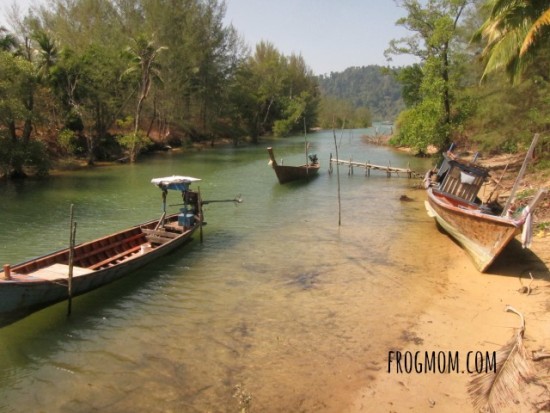 From Bangkok, we flew to Phuket airport and from Phuket Airport, we transferred by car to Kuraburi, a small coastal town. There, we met our boat driver who took us three and our luggage on a long-tail boat to Kho Phra Thong, navigating between sunken mangroves and forested inhabited islands. Finally, the boat entered a narrow and shallow sandy lagoon that ended on a covered pier, seemingly in the middle of nowhere. It was our destination. From getting up for the early morning flight to reaching the pier, the trip took roughly 8 hours. That’s how remote Koh Phra Thong is.

Koh Phra Thong is one of the islands that suffered badly from the 2004 tsunami and at the time of our trip, facilities were basic–electricity and running water would only available in the evenings from 6.30pm onwards. That, in itself, would be an adventure and I didn’t know how well my girls would cope. From the pier on Kho Phra Thong, we met Barry, biologist specialized in sea grasses for Naucrates, who picked us up with a sidecar and took us to Lion Village. 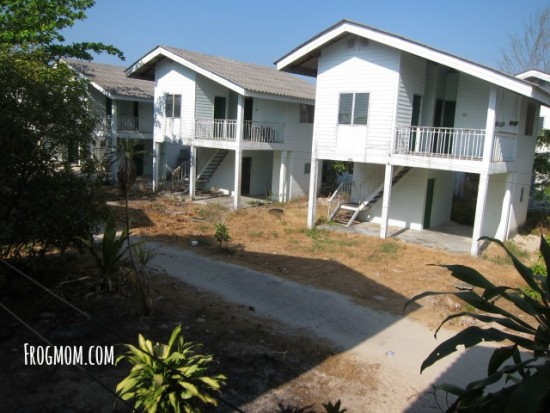 We stayed the first night at Lions Village, a brand new village financed by the Lions Rotary Club of Phuket after the tsunami wiped out Bak Jok, a fishing village on the coast. Featuring 110 2-storey concrete houses, a school, a community center and communications tower, Lions Village was completely empty when we arrived early in the afternoon, save for a few women and our hostess. Homestays at Lions Village are the result of a partnership between Naucrates and local communities so if you volunteer for the sea turtle project, I suggest you enjoy the homestay experience at least one night as it’s great. 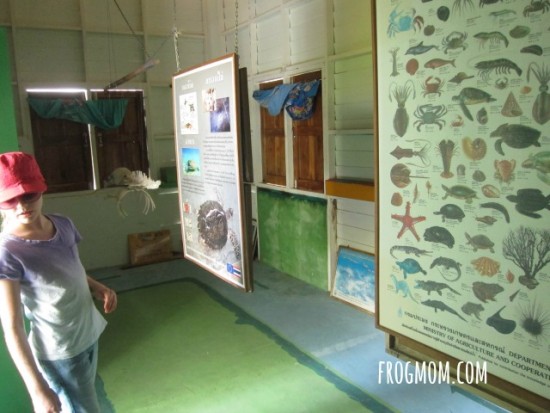 Barry offered meet us for a savannah tour at 6pm, which meant our afternoon was free. Mostly, we stayed in the shade to avoid the unforgiving heat but after setting down our luggage in an upstairs bedroom, we walked around the village, visiting the Naucrates Sea Turtle Project exhibit at the community center, spotting cashew nuts and fish heads drying in the sun, and going around every single room of the abandoned school whose basement doubled as tractor storage. 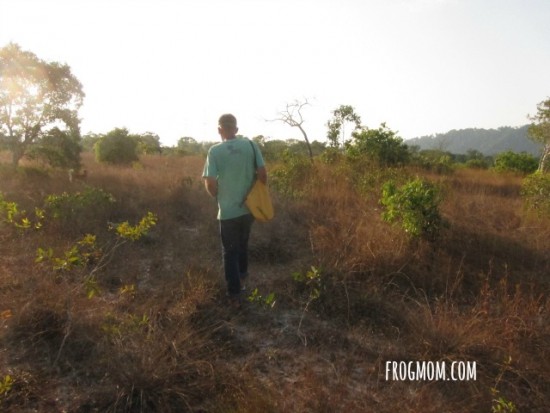 At 6pm, we met up with Barry who kindly led us on foot from the village to the savannah of Kho Phra Thong, an actual savannah ecosystem close to that of African savannahs. There, he showed us the paper bark tree (bark you can write on), tea trees and intriguing yellow hanging pods that split up to reveal nests of swarming red ants. It was amazing and would be a highlight of visiting Koh Phra Thong for anyone interested in pristine nature landscapes.

In the evening, my girls played with the village kids and based on this experience, I wrote a very popular story on when kids grow up on tropical islands without electronics. 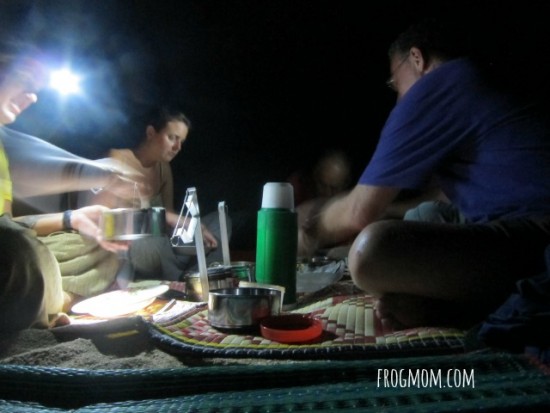 Naucrates coordinates various activities to help preserve green sea turtles on Kho Phra Thong, including dawn beach patroling for new nests, night beach camp-outs to monitor nests about to hatch, reef monitoring for sea turtle sightings and tide and weather station monitoring to collect data. We did all of these activities and never saw a single sea turtle but that was OK. Of course we were a bit disappointed but sea turtles are wild animals and don’t show up on schedules. That’s actually a good lesson to learn and we knew that our chances of actually seeing sea turtles would be low. We did, however, spot signs of sea turtle activity and see videos of baby sea turtles hatched during our stay, which was greatly satisfying for my girls. 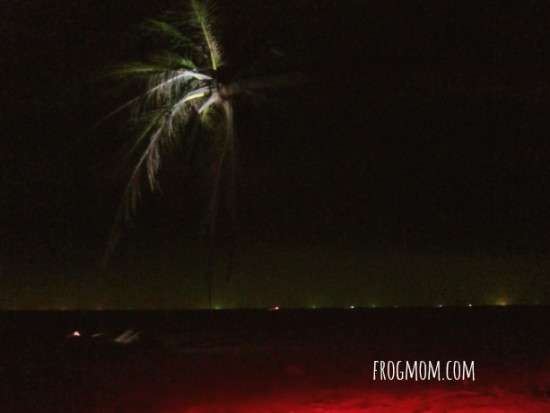 Our first day of family volunteering started with a night beach camp out to monitor a sea turtle nest. It was supposed to hatch within a few days of our arrival and we hoped that we would be lucky. Since my girls and I were to meet a group of volunteers on the beach around 9pm, ewe had an early dinner and started walking south from our hotel at 8pm, carrying beach towels, head lamps and water bottles in a backpack. On the way, we had fun taking a few pics under a reclining coconut tree, watching the distant lights of fishing boats on the horizon. Walking in the dark for miles was slightly eery and after an hour, I guessed that we must be near the nest. But how do you spot a sea turtle nest in the dark? It’s underground on the beach and I only knew that this one would be marked by a few bamboo sticks. Fortunately, we saw a few lights coming our way and indeed, we’d stopped 30 meters short of the nest.

We met the team of volunteers, who hadn’t had dinner yet and opened canteens of fried rice and curry to eat on beach mats. The night was absolutely beautiful and my girls played with sea shells for a while, but around 11pm they were still awake and getting cranky. I’d hoped that they would fall asleep while we kept watch but the sound of the waves was keeping them up. Taking our leave, we walked back an hour in the dark, talking about sea turtles and how cute baby sea turtles must be. 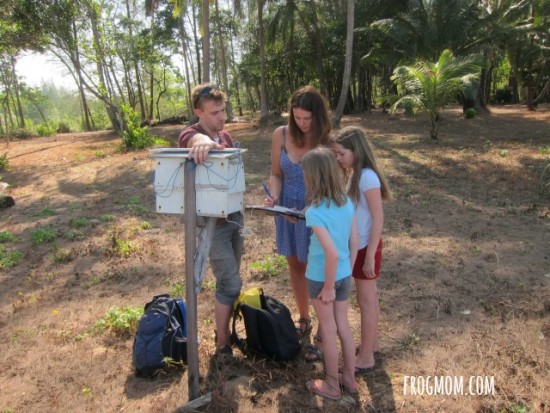 Naucrates’ mission is to collect verifiable data that will be analyzed later by scientists to monitor the state of sea turtles in Thailand. This data includes weather data, namely air and sea water temperature as well as tide measurements. This was by far my girls’ favorite activity, as they were in charge of collecting a bucketful of sea water to drop a thermometer and read the temperature, then they measured (with a measuring tape) how high the tide had been on the beach, and then they read the air temperature in a small box and reported their findings on a daily log. 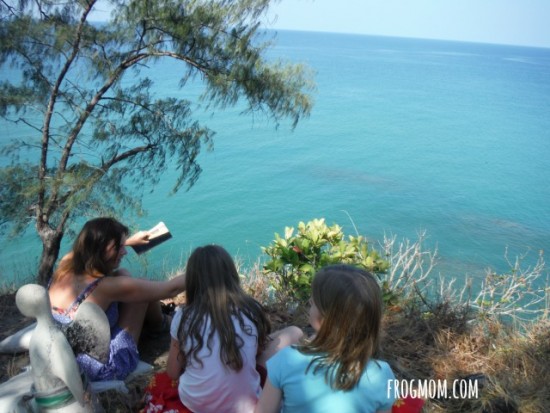 From the top of Horn Bill, my girls took turns watching three separate coral reefs with binoculars during a couple of hours. Sitting in the shade, we watched the vast blue expanse of sea in front of us and it was hard to tell whether a dark spot on the water was floating algae or animal sighting. The two other volunteers had a coral reef map that helped ID what we saw but that day, we only saw two snorkelers. The previous day, volunteers had spotted a sea turtle coming up to breathe at the surface twice next to a coral reef. It was exciting to know that sea turtles were around, despite their absence. 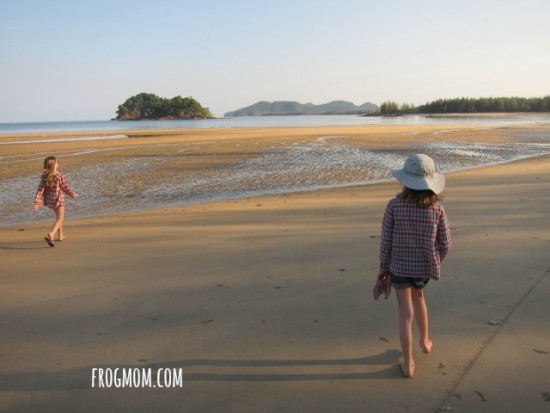 Mother sea turtles lay their eggs on the beach at night and leave humongous tracks in the sand. Their tracks can be a real threat to the eggs as sea turtle eggs are hunted by local fishermen to be eaten as part of their traditional diet. The main goal of the dawn beach patrol was to walk the length of the beach to look for any sea turtle tracks and if found, to erase them. On our last day of family volunteering, we started combing the beach at 6am and walked 2 hours but didn’t find any tracks. Starving, we met up with the other volunteers at a beach restaurant for breakfast and there, had the best surprise ever. 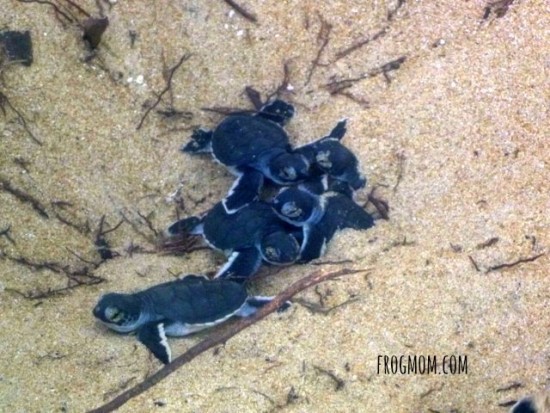 At the breakfast table, one of the volunteers got his phone out and showed us pictures only hours old. Baby sea turtles had hatched during the previous night’s beach camp out! Volunteers were about to set up camp after 5am when they saw a colony of these little guys poke their heads out of the sand and come out one by one. 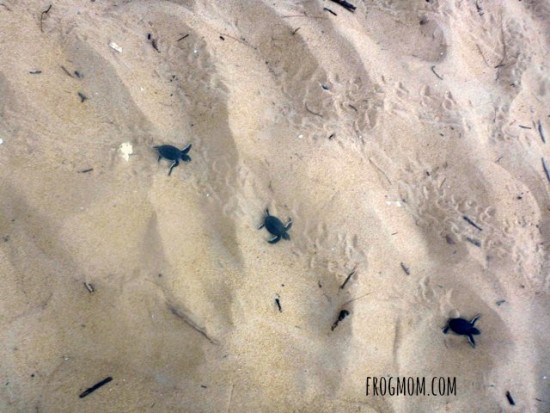 They had crawled down the beach to the sea, following each other in a procession. 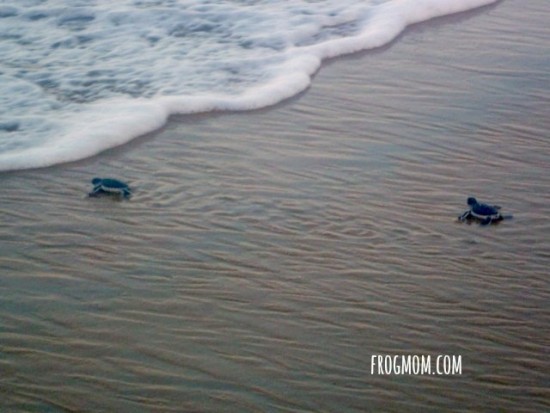 And off they’d gone into the ocean. How’s that for super cool! Though we hadn’t seen them with our eyes, we were completely ecstatic at their report and loved seeing these grown men tell the story of hundreds of baby sea turtles being born and making their way to the sea. For them, it was an experience they would always remember. For us, it was the proof in photos that volunteering for sea turtles can lead to miracle moments but you need either more time, more patience and more luck.

This concluded our family volunteering experience with Naucrates.

What You Need To Know Before Going

If you decide that this type of family volunteering is for your family, here are a few pointers.