Not every bird warrants a beach fight but Kentish plovers, adorable fluffballs, are fragile shorebirds that are endangered and certainly deserve some effort. A month ago after Covid19 lockdown relaxed in France, I went for a walk on the beach with my dad to collect some floated bamboo sticks and stumbled upon two people watching a protected beach area. We got into a discussion. They were guarding a nesting site for Kentish plovers (Charadrius alexandrinus) and little terns (Sternula albifrons), both on the International Union for Conservation of Nature’s Red List of Threatened Species. A month later, I’m reporting from the trenches as an avid advocate of fluffballs & more.

I first heard about plovers in California when some coastal areas were being closed off in San Francisco during snowy plover nesting season. (Snowy plovers are North America’s cousins to Kentish plovers.) Initially, I didn’t get it. Why would any birds be bothered by humans? Why couldn’t we enjoy the beach at Crissy Field as usual? I’ll admit I was slightly miffed and chose to visit other beaches open to the public but I still didn’t get it. 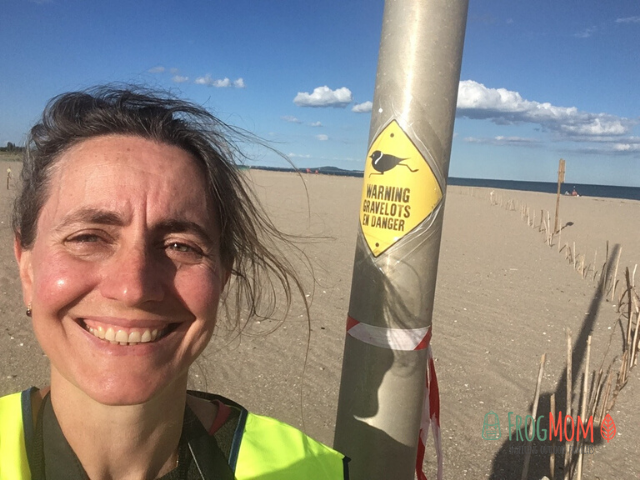 Add to that the fact that their speckled eggs are perfectly camouflaged in shallow sand dips and you’ll realize that omelets are unavoidable when the species most needs protection — nesting time.

Fast track to lockdown 2020. In Occitanie, local media starts reporting on a protected bird area local to me where sand dunes become off limits because nesting birds set up shop on trails and in sand dunes. One might say, business as usual for these birds, plopping themselves down on comfortable spots next to good feeding grounds to breed the next generation – except they don’t know that humans are temporarily sheltering some place else. The same humans will eventually return and their perfect nesting plans would face environmental Armageddon – summer tourism.

Busy with life, I don’t get involved with the local nonprofit right away although I do like their Facebook page right after I return from the beach with my dad. It takes a disaster to get me to act.

In the night of May 30 to 31st, 2020, five idiots decide to throw a two-wheeled rodeo in off limits beach areas. Mountain bikes follow in the same tracks that same night and cause further damage. The following morning, volunteers find several tern nests crushed or abandoned. There are only about 30 birds of each species to start with. This was not good. 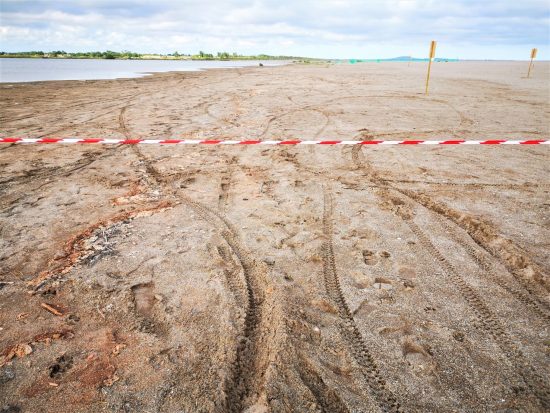 Two phone calls to the Association Orpellières later, I show up for my first bird watch on a Wednesday evening after work.

You’d think with a colony of less than 50 birds of an endangered bird species, with odds stacked so high against its reproduction, that local authorities would be falling over themselves to treat the birds like royalty. Surely, the city of Sérignan would recognize the amazing conservation opportunity, the local park rangers, the coastal conservation trust (Conservatoire du Littoral), the local Ligue de Protection des Oiseaux (LPO — French Audubon or RSPB equivalent), even the police would help.

The heavy-lifters behind every single conservation measure to protect nesting Kentish plovers at that spot are the Association Orpellières, a grassroots citizen movement headed by Yann Geshors and counting only a dozen active volunteers. Laminated signs, DIY bamboo “fence”, public awareness campaign, beach patrols, media outreach – all done by the Association Orpellières on the members’ own time and funds.

Yann is the guy I met on the beach when walking with my dad, he is the one who inspires many to care for these tiny birds.

The nesting site at Sérignan-Plage is known as La Grande Maïre, part of coastal wetlands that host 14 distinct habitats, from samphire marshes further north to this brackish lagoon only a stone’s throw from the Mediterranean sea. Conveniently, La Grande Maïre is only 9km/5.5 miles from my dad’s house which made my decision to volunteer even easier.

On my first watch, Yann welcomes me on the parking lot. He’s been patrolling the beach the whole afternoon. While we wait for more volunteers, he explains all the threats Kentish plovers face. From dog walkers to trespassing humans, from seagulls to crows, from crab fishermen to bikers or ATV-heads, these birds certainly don’t lack for challenges to get the next generation off the ground. Yann shows me the perimeter and he turns a dogwalker around before he enters the beach.

Dogs are wonderful pets but they love bird chicks – as in, munch, munch, love. When not on leash, they also pose a threat to bird eggs as they can easily crush them. Fortunately, this beach is off limits to dogs since 2010. Yet, people still show up to walk their dogs when the next dog-friendly beach is 10 minutes away.

Yann leaves when seasoned volunteer Aude takes over, taking us (the new cohort) onto the beach. She narrates the saga of the May 30th incident, how the LPO and the city were reluctant to get involved in legal action but eventually did after the act of vandalism made national headlines.

Eager to discover fluffballs, I am getting a kick of any moving animal with feathers. They include: 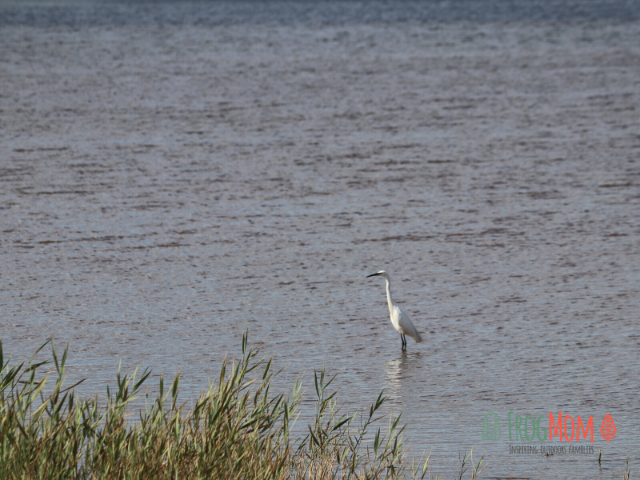 Seagulls daring terns into frightening them. 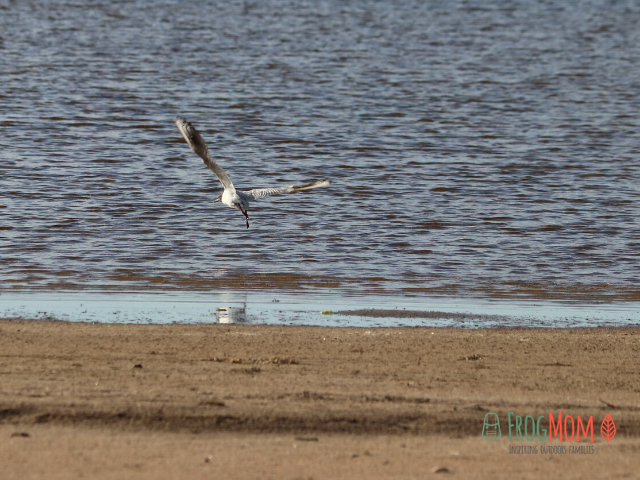 Terns scaring the living daylights out of seagulls – before returning to nest on the sand. 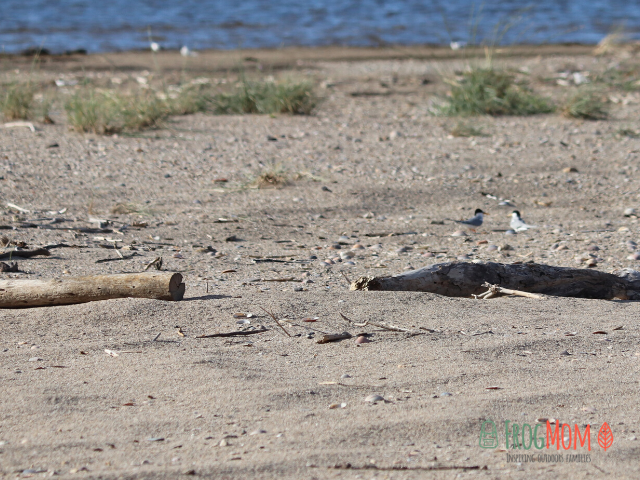 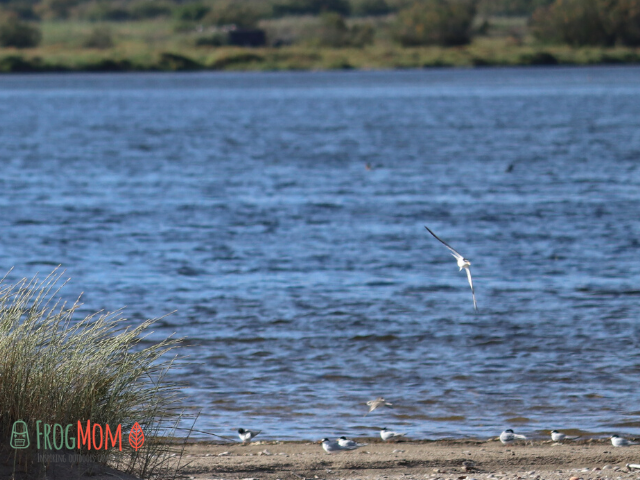 Pretty much the ADHD poster kids of birds, plovers have a unique way to scurry, stop, scurry again. That first evening, we spot no chicks but the company and learnings are great. Also, we turn around quite a few dogs and an angry dog owner yells at me, but overall it’s a great learning experience.

I returned three days later at dawn. Patrolling the beach for the summer solstice at sunrise is equally as appealing as scouting fluffballs but mostly, I am hoping that early morning is a good time for chicks. Like a Druid, a Watcher of the Old Ways and a Protector of the Bird Realm, I am waiting for something magical to happen. 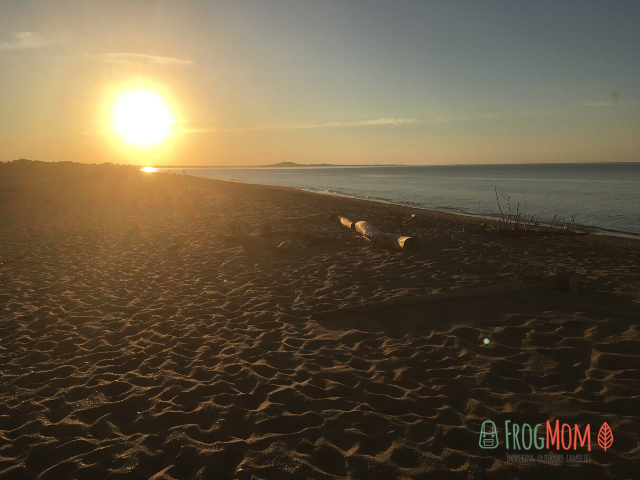 With volunteer Camille, we walk along the perimeter, spotting human footprints in the sand headed directly for the lagoon. Coud be crab fishermen, random people (there’s a beach restaurant closeby), dog walkers. Whoever they are, they ignored the red and white safety tape they had to walk past.

I realize it’s not that rare an occurrence.

At the other end of the perimeter, we start head counts, which is really tough if you’ve ever tried to count running birds. They’re specialists in “now you see me, now you don’t”. Suddenly, Camille exclaims, “Poussins!”.

Binoculars to the rescue. 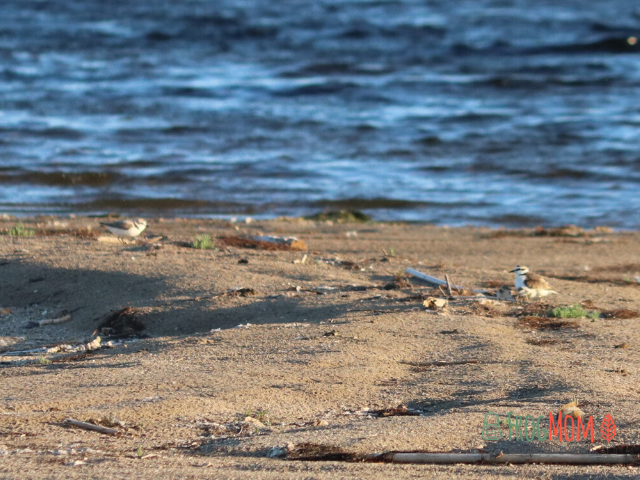 Given the quality of my camera lens, you’ll have to use your imagination on this one. Imagine three baby chicks sheltering under the wings of the bird on the right of the picture. Cuteness incarnate. As anticipated, real fluffballs. And these chicks are true free spirits – they run like headless chickens! (bad pun, sorry.)

For a better idea of the cuteness overload, here’s a great shot of a Kentish plover chick published by Birds of Bahrain. 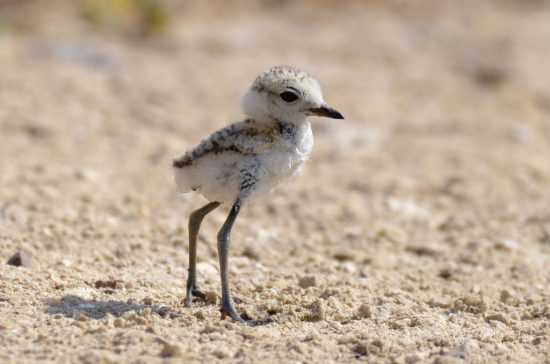 Summer solstice magic happened. Also we turn around a dozen dogs – the chicks live to scurry another day.

Two mornings later, I return at dawn with my friend César to check on the young’uns. Whipped by decent northerly winds, we spend the better part of an hour standing behind a fence, observing what look like baby terns. Not dissimilar to grey rocks, these chicks move a lot less than plover chicks and cozy up with adult terns. Very cute. 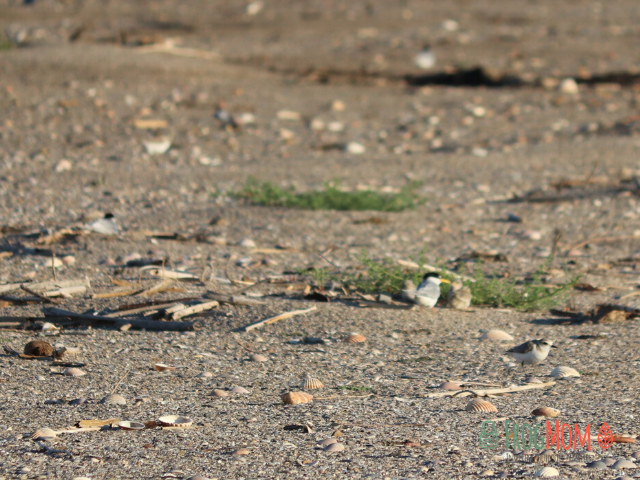 Up close, that’s what they might have looked like as photographed by the Kilcoole Little Tern Conservation Project in Ireland. 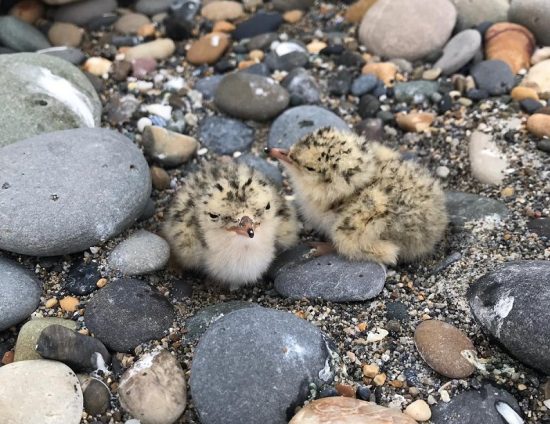 Honestly, from afar, would you tell them apart from a rock? Meanwhile, Kentish plovers are busy scurrying away on the beach inches from terns but there is no mixing of species in terms of chick-care. Closer to the waterline, a large brood of four plover chicks delight in attempting to all fit under an adult plover’s warm belly at once before scattering to run together in a clump across the sand. 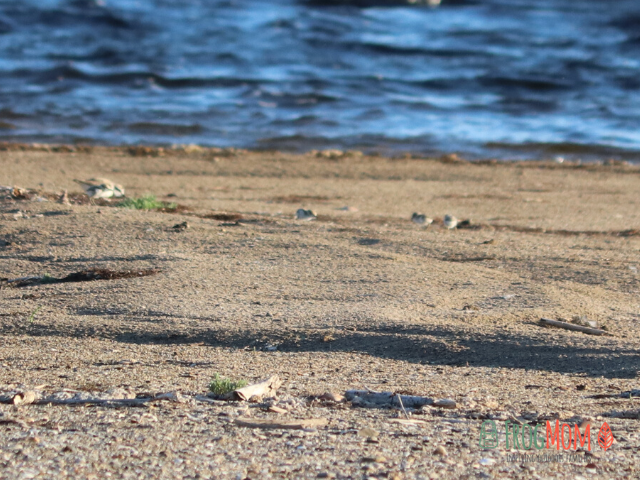 There are bigger shells than these chicks on the beach. 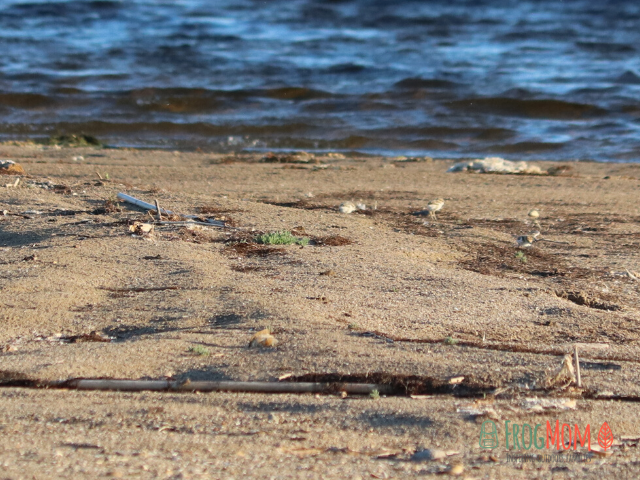 After work, I reach the beach at the same time as two members of the coastal police taskforce. Very cool moment. We trade intel on the chickies, they patrol the beach, they address members of the public and mention better conservation measures for 2021 onwards. I say, it’s very encouraging. 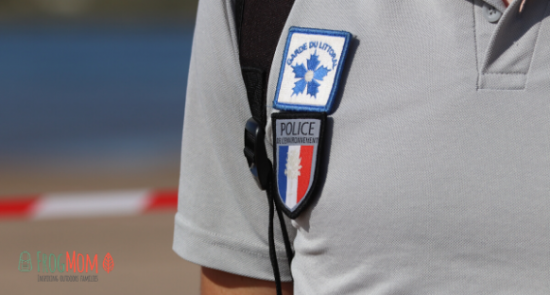 Even better, kids show up with their families after a beach day. As I scan the beach with my binoculars, I hear young voices behind me. “What are they doing?” “Why is there red tape?” “What kind of bird are they protecting?” It’s music to my ears. I jump on every opportunity to share details on the nesting birds, their endangered status, their nesting behaviors or how to protect them. Overwhelmingly, kids and their families are very supportive of the initiative and think it’s “cool.” Only one grumpy guy bemoans the fact he can’t access the lagoon to fish for crabs. Lovely encounter with a retired local on a wheelchair who shares his childhood stories about La Grande Maïre and the evolution of marine wildlife during his lifetime.

Summer is definitely here. At 7am, the day is already warm. Mornings at the beach are quiet, a few fishermen are set up by the shore — including a guy who cracks me up, indulging in more bathing than fishing. Nicole, another volunteer, turns away two dog owners but on the parking lot, we spot two stray dogs including this furry dog. 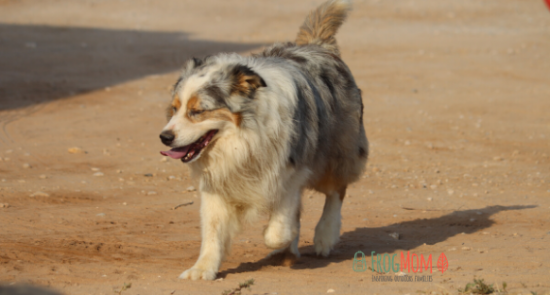 What do you do with stray dogs? We have to resort to gesturing and loud voices to shoo them away. More fun is what we witness in the protected area with chicks. I’ve circled them in white on this pic as they are small and far away, not the best combo for clear shots. 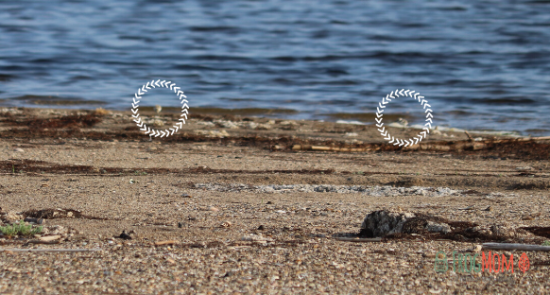 They’re looking for breakfast by themselves! My Lord, they do grow up fast. Last week, they were waiting for worms with their beaks open. This week, they’re off foraging by the shore like proper teenagers. I feel like a proud auntie. Also, we learn that a new nest with eggs has been spotted.

If we can keep up the effort until the chicks can fly away in a few weeks, I think that we’re doing something good.

How can you Help Kentish Plovers?

Come visit, learn about the birds, spread the message and help us! To find the nesting birds, walk northwest of Latino Beach, a beach restaurant, along the lagoon, opposite the campground.You can’t miss the cordoned off area.

Next time you head to the beach, keep an eye out for these lovely birds and don’t forget your binoculars. You’ll come back with a smile on your face.