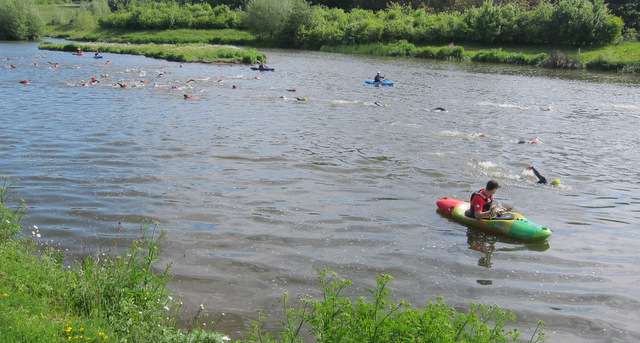 That was my husband’s answer when I suggested we swim a 10K together last winter. I wanted to sign us up for the Jubilee River 10K, one of the few swim marathons you can swim as a relay team. “It’ll be fun! It’ll be an adventure!” I promised. How could it not? It was something neither of us had ever done before. While my husband easily swims 3K in a pool, he had never swum in open water before. As for me I’m an open water maniac but an intriguingly slow swimmer and top my practice swims at 2K. Therefore 10K in open water sounded like a good challenge for the two of us.

The same day, I signed us up.

The course was divided into four legs. I’d start with 1.9K, then my husband would do 3K, then I’d do 2.6K and he’d finish with 1.5K. That would be 4.5K for me, 5.5K for him. What really sold me on this race, more than the swim challenge, was that my girls would be able to follow us on the towpath next to the river. Planning for spectators is usually tricky on big races and this one was providing me with a ready answer. We’d alternate adults walking with them and my girls would never be alone, being able to follow our progress on foot and act as little cheerleaders for their parents.

The winter dragged on terribly and I was not able to squeeze in a single open water swim before the event. Outside water temps did not even reach a chilling 11c/51.8F two weeks before the race so a month and a half before race day I said shuck it. As annoyed as I was, I couldn’t wing a 10K, no way. I signed up for a local gym with a swimming pool and make the best of their chlorinated lanes two or three times a week. First I was out of shape and stuck to 1K morning swims but then I realized the 2.6K leg would require more of an effort so I quickly rose the bar to 2K practice swims. If I could do 2K in a boring pool, I could do 2.6K in a river with current.

My husband trained differently. He’s a maniac swimmer anyway so he just kept a steady three times a week 3 to 4K swim regimen, even on business trips throughout Europe and the US. Everywhere he traveled, he found public swimming pools. A week before the race, I persuaded him he should do an open water swim and signed him up for a trial swim in the Lake District. He grudgingly bought a wetsuit and went into a lake. By the time I picked him up, he was sold on the idea. Not just open water, but the fact that water with a wetsuit wasn’t cold and that open water could open new territories in our family adventures.

The night before the race we prepared everything we would need: wetsuit, Glide, goggles, waterproof sandals, towels and a change of clothes. To make the 10K walk more palatable to our girls, we prepared a nice picnic lunch and a few treats for them to munch along the way.

In the morning we woke up our girls and drove to the registration area. I picked up the ankle bracelet with a timing chip that we would switch when getting out of the water, and we changed into our wetsuits. Unfortunately we missed the bus that was to take us to the start but the organizers found other cars to drive us there. After a small prep talk, I joined 138 swimmers down the banks of the Jubilee river. It looked so pretty and bucolic. I’d never swam in a river before and was excited to find out how I would like it – or not.

Stepping in was mildly chilly and to shake off the 14,7C/58F, I swam briskly to the middle of the river. Most people stayed on the right so I moved to the left so I would be out of everybody’s way. At 9.30am the organizers yelled a quick countdown and I heard “Go!” from the shore. In my head went. In the river, that is. I dared not look back at my husband and daughters and concentrated on reaching a consistent stroke instead.

I may not be a fast swimmer but once I reach my cruising speed, I’m a steady swimmer. Stroke, stroke, breathe. Stroke, stroke, sight and breathe. I had no prior idea what sighting would be like in a river where, obviously, I could see both sides at all times. It had to be easier than in the sea. Since I know that my left hand tends to cross over, I regularly corrected my course to keep roughly to the middle. However sometimes I drifted too far right and the stringy brush of weeds or reeds on my arms worked wonders as a wake-up call to readjust the course.

The passage of a first bridge sort of gave me the creeps. As soon as I was under the brick arches, the water got darker and the watery sounds echoed off the walls. If the water was murky before, it was now a dull dark brown with almost no visibility and my perspective was somewhat confused. It might be my imagination but it also felt colder. As a whole, what a bizarre sensation. It only lasted a few seconds but I was glad to  be back under sunny skies.

Though I had been passed by a number of swimmers at the beginning, I progressed nicely and kept an eye out for the first fueling station. I knew to look for an exit on the right and it would be visible from far – because you know at water level, you don’t see much at all. It was a tall and narrow sail flapping in the wind! Just when I was internally meditating on the tasting qualities of the water – which reminded me of an earthy green tea with a hint of grass – I saw the sail and swam towards it. As is usual when you swim towards a goal, time seems to slow down and you do’t go as fast as you thought you did. I would have wanted to reach that flag in seconds but it took minutes. Many minutes. Finally I stepped out of the water and onto the bank.

And so we walked for the next 3 miles. I’ll say, waterproof sandals are not the best for walking and it was funny walking in my wetsuit, dripping all the way. By the second fueling station I was almost dry and quite warmed up. The prospect of getting in the water was less exciting than the first time. Nonetheless I waited for my husband, strapped on the timing chip when he arrived and walked over to the next way in the river down some stairs.

My second leg was 2.6K and I was not as fresh as for the first 1.9K. What led me to think that I could swim 4.5K in a day if I could swim 2K straight in a pool? Beats me. Next time I’ll wise up and try at least once to swim the whole distance. Now that I knew what the fueling station flags looked like, I kept an eye out for the next one like an eagle. Maybe too eagerly as I developed a rash mark in the neck, probably from looking up too much.

It seemed to me like I was slowing down and I was getting passed by swimmers from the 10.30 am “fast wave.” Man, some of these were aquatic torpedos. Their legs and arms were in such good sync that I barely knew they were next to me before they disappeared around the bend leaving behind a foamy trail.

At last the third flag appeared, after quite a few bridges and wading swan families. I got out, exchanged the timing chip and sat down to relax for a minute before strapping on the sandals. My husband took off without a cinch and we were able to follow his progress all the way to the end. When he finally made it to the last flag, a finish team was greeting the swimmers and a girl was handing out medals.

To reward my girls for being such a good cheer-leading squad, we took them to the awesome playground – with zipline – of the park.

What a workout! I slept like a baby that night. At bedtime, my 9-year old said, “Maman, it was the best day ever. We were able to be outside and hike while you swam and then we went to the playground. I really enjoyed it.” My my little girl, that’s nice to hear.

Next time I swim a long distance, I’ll train better. I’ll even find a lake or a sea up north because I prefer colder water and more remote environments. Nevertheless, a 10K swim an hour’s drive from London, that was pretty cool.