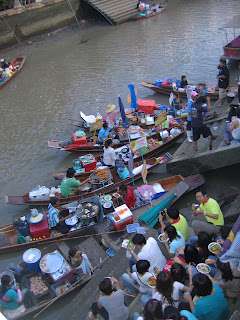 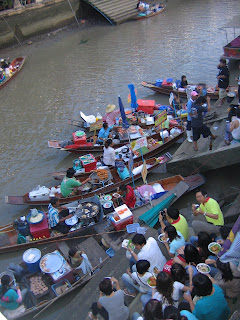 There are several floating markets around Bangkok and the infamous Damnoen Saduak market has long become a tourist trap. Rather than squeezing on a long tail with a carload of fellow tourists, I decided to look for other options. Fortunately, in an effort to revitalize sleeepy neighborhoods, several new markets on waterways have been recently created. The Bangkok Post recently ran a story about new floating markets in Thonburi, near Bangkok. Amphawan, one and a half hour south of Bangkok in Samut Songkhram province, is the fruit of similar efforts.
Driving to Samut Songkhram, you’ll see many a salt farm with wind mills and roadside stalls selling rock salt and fine salt by the kilogram. It’s one of the local productions alongside pomelo (som-o) and palm sugar.
Amphawan Nam Talad (Amphawan floating market) happens to be an afternoon-evening floating market, the kind that caters to diners and fireflies enthusiasts. It looks like early morning markets sell more produce while evening ones feature more restaurants 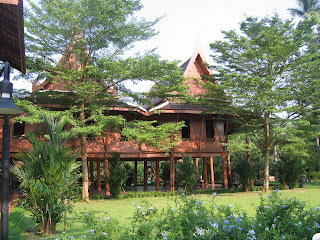 on boats. As a result, when we got to Amphawan round 4pm, the market wasn’t open yet. We parked in front of beautiful traditional thai buildings by the Wat Amphawan and decided to visit them.
Luck had it that Amphawan has one of the nicest gardens I’ve strolled through in a long time: the King Rama II Memorial Park. With acres of green lawns, landscaped canals with lotus flowers, wooden buildings built in traditional Thai style and displays of traditional artefacts ranging from antique puppets and benjarong ceramic to musical instruments, it is almost more worth the trip than the actual market. 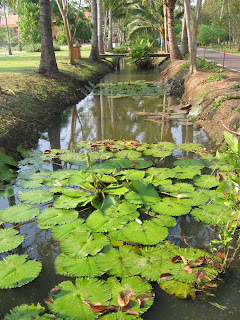 Being wheeled around, my grandmother marvelled at the different species of trees in bloom. Stopping by a banyan tree overshadowing a pond, my grandmother remarked that there were probably fishes who’d like to eat some bread. By coincidence, I had a bread stick left from lunch in my bag. My four-year-old ran by the water and broke down her stick. In a matter of seconds, the water was covered in riddles and fish came jumping out from below. My two-year-old squealed in delight and followed her sister’s footsteps by the canal. It made my grandmother’s day.
After all the bread was gone, we strolled between coconut trees, bread trees and banana trees, all laden with fruit. The gentle blossoms of the hibiscus and plumeria filled the air with sweet scents. By then, it was time to head to the market and so we did.
Leaving lush quiet gardens behind us, we entered the hustle and bustle of the street market leading to the canal. It was a Thai food lover’s dream: coconut custards steamed in clay pots, fried shrimp pancakes, sticks of meatballs covered in sweet spicy sauce, tiny rice doughnuts, barbecued bamboo sticks filled with sweet sticky rice and red beans, curries steamed in banana leaf boats and more. We hurried long as we had to be back in Bangkok for dinner time.
Finding a boat was easy, there are several by the left side of the foot bridge. We paid B 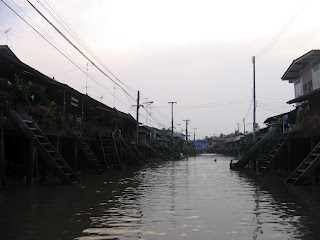 aht 600 (roughly $16) for a 40-minute ride. The boat quickly left the market behind as it mainly consists of a few blocks by the water. We then got to big river, the Mae Klong, which we raced through during twenty minutes. On my signal to come back, we entered a smaller canal and the best part of the trip began.

Wooden houses on stilts were coming to life after a hard day’s work. Lights on, home interiors revealed to us their bare furnishings, shell decorations and hammocks by the boardwalk. Grandmothers were cycling home with grandchildren, seniors were idly sitting by the river feet dangling above the murky waters, fishermen waist deep in the canal were throwing their nets in front of us. I even saw a few signs for homestays, evidence that tourism is taking new forms in Thailand. Local is in!

As night was drawing nearer, we reached the pier. Time to go home.