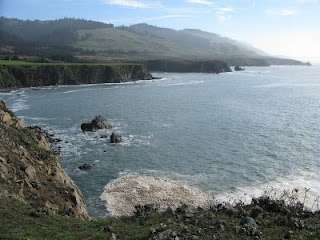 > Fort Ross: From Russian-America With Love

Fort Ross: From Russian-America With Love 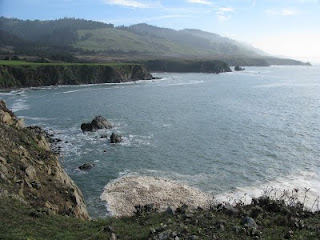 1811. Europe is at war with Napoleon. On the North California coast then known as Upper California, Vologda native Ivan Kuskov gets his men ready to drop anchor in a cove next to a rocky promontory. The spot, 15 miles north of Bodega Bay, is the seasonal home of the Kashaya Pomo native people. They call it Metini. Satisfied by the terrain, Kuskov returns to Russia to report on the area. In 1812, Kuskov comes back to purchase the land from the Kashaya Pomo for “three blankets, three pairs of breeches, two axes, three hoes, and some beads.”

Heading 25 Russians and 80 native Alaskans, Kuskov builds a wood fortress for the Russian-American Company, a government-sponsored trading company established by Tsar Paul I. Their mission is dual. First and foremost, they need to find alternate sea otter hunting grounds to Alaska whose waters have been excessively plundered. Sea otter pelts are precious commodities for trade with China at the time. Fort Ross is also to become the company’s agricultural base in America. Fort Ross will be the new and southernmost outpost of the Russian enterprise. 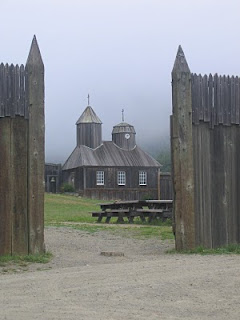 As it turns out, Fort Ross never lived up to its promise for the Russians. Sea otters disappeared quickly, the cost of shipping agricultural goods outweighed the efforts spent growing them, and hunters-turned-farmers lost their illusions. Sold by the Russians in 1841 to John Sutter (8 years before the Gold Rush), Fort Ross still stands today as Fort Ross State Historic Park, a rare testimony to California’s Russian ghosts. 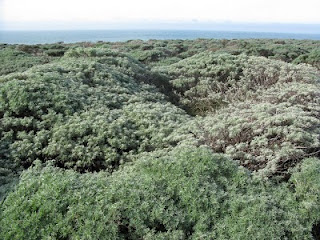 Having already visited Fort Ross three times in the past, we decided to explore the coastal trails right on the bluffs overlooking the ocean. We sort of knew about the history. Now we could focus on the nature and it is every bit as majestic as the area’s quietly troubled history is intriguing. Welcome to Big Sur’s little sister.
As we exited the fort, we followed the stockade wall and walked towards the sea. This might have been where the sloped fields were tended for produce, where wooden shacks lived the rythm of civilian life next to the army barracks inside the fort. Nature has now reclaimed the views.

There was a nice wide path on the left that soon winded down towards Fort Ross cove, one of the first California shipyards. Shoes sinking in the black sand, I tried to imagine the criss-cross of jetees and pullies, ladders and washed canvas next to the wood working shops. It seemed like a stretch. Nothing remains. Even the clams at Clam Beach are gone. Fort Ross today is not 1820 Fort Ross. 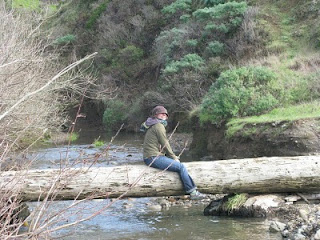 At this point, Fort Ross creek separated us from the trail so we made our way through thickly tangled willows and alders to find a tree stump to reach the other side. Some of us made it standing up, others went more cautiously crawling. To each his own way. 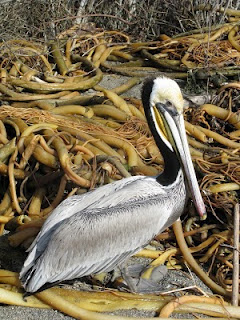 A lone pelican graciously landed on the beach and clumsily strolled down to the lagoon where we were able to admire him on a backdrop of bull’s head kelp. The bird was amazingly oblivious of our presence. I don’t think I’ve been able to check the colors on a pelican’s beak that well before.

After a while, we kept on going and followed the trail leading up to a vast coastal terrace. In between muddy spots, we walked along the coast towards Ross Ross reef. In the mud we spotted raccoon and deer tracks, the local regulars. We could have kept on going for 4 miles until Reef Campground but we turned around after roughly a mile. The young ‘uns were getting hungry. 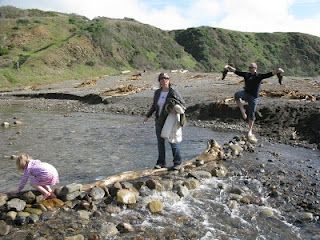 Coming back on Fort Ross cove, we spent a little time building a rock dam just to see if we could cross the creek at another spot. Having done our deed, we took a few steps back and watched as other visitors arrived on the beach, looked for crossing options and hesitated between our rock dam and the not-so-easily-accessed tree stump.

It was in fact a great game and I can proudly say that 8 to 5, our dam didn’t look that bad to newcomers. 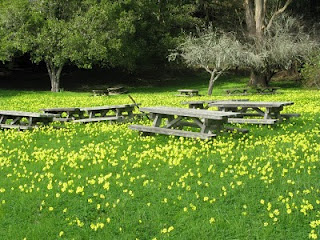 Lunch was getting more and more appealing so we hiked back up and set up shop on the picnic tables right next to the fort. The field of blooming sour grass was incredibly pretty and we did our best not to disturb the grasses by crushing them. Futile effort since the sour grass is probably the most resilient grass around and it will be gone soon to be replaced by other wild grasses anyway.

Nonetheless, the sight was too close to a pre-impressionist painting to be disturbed. As we left, I was already planning the next visit with a walk through the former orchards and an excursion next to Plantation to check the hills. Great area. May it remain pristine and undeveloped long.

One thought on “Fort Ross: From Russian-America With Love”