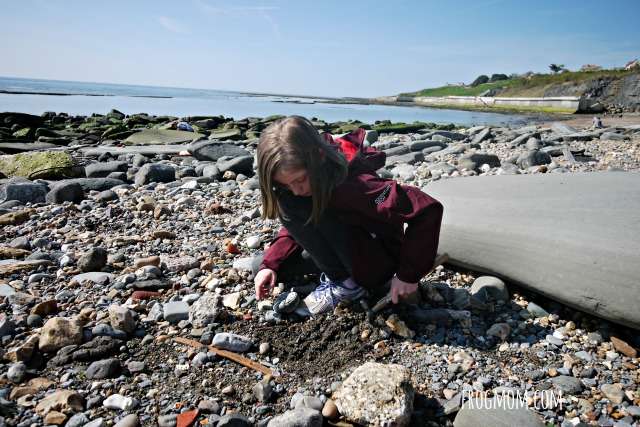 > Fossil Hunting with Kids | Discovering the Jurassic Coast in England

Fossil Hunting with Kids | Discovering the Jurassic Coast in England

Studying dinosaurs at school is great but nothing beats real life observation and digging with bare hands in the sand. That’s what I observed when I took my two girls fossil hunting, a very hands-on way to illustrate prehistoric times for kids. We had already scoured all dinosaur exhibits of London’s Natural History Museum and it was time to take my junior palaeontologists on the field. Fortunately in England, that’s quite easy.

Three hours away from London, the Jurassic Coast, a World Heritage Site, is in a rare position of being a hotspot for fossils and a stretch of coast slowly washing away in the sea with storms. Unless somebody collects them, fossils are destroyed by the sea and finish as sand particles. That means that my family was actually encouraged to become responsible fossil hunters, to preserve some of these fossils.

What is the Jurassic Coast?

From Exmouth in East Devon to Studland Bay in Dorset, the Jurassic Coast offers 95 miles of of outstanding Earth science that families can explore on foot and by car. The two best spots for fossil hunting are supposed to be Charmouth and Lyme Regis. We opted to stay in Lyme Regis as the quaint village looked lovely and it was close to two other geological landmarks I wanted to explore, the beach featured in the crime TV series Broadchurch and the famous Durdle Door. In Lyme Regis, tourists come for the Jurassic Coast but like us, they often discover that the city has more to offer which makes a multi-day stay a very pleasant family break.

Back to the plot. Roughly 250 million years ago, the Jurassic Coast was nothing like the dramatic coastal cliffs and tranquil pebble beaches that you visit today. 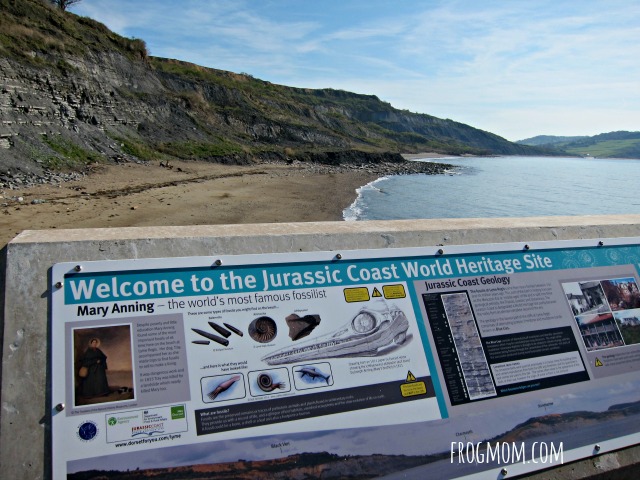 It was successively a desert, a tropical sea, an ancient forest and a lush swamp. All that is recorded with animals and vegetals fossilized in cliffs that keep eroding with the elements. In fact, the Jurassic Coast is somewhat of a misnomer as that stretch of coast shows examples of fossils from the Triassic, Jurassic and Cretaceous periods. That’s 155 millions years of Earth science concentrated in a very small area. That’s also why this stretch of coast was designated UNESCO World Heritage Site.

Looking at the fossils we collected, I would have been unable to identify any of them but we were lucky to have a guide. Which brings me to the next point.

Where & How to Find Fossils

A local could tell you that fossils are everywhere to be found and it would be true. However, that’s not very helpful if your time is limited and you want to make sure you’ll find fossils to bing home. Being no fossil expert, I looked at the options we had to go fossil hunting and found out that the Lyme Regis Museum organized free guided walks on the beach. 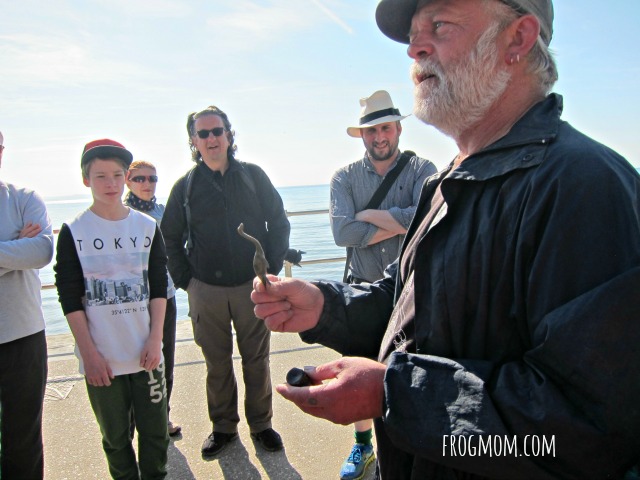 Now. My girls hate guided tours, guided walks and anything with the word guided in it. It took two lollipops to get them to accept to join this walk but it was so worth it. How else would we have found dinosaur poop?

I simply reserved our 3 spots over the phone in the morning and right after lunch, we joined a small group of people on the harbor. Our guide, a local geologist, had brought various fossils to show us what to look for and what to expect. 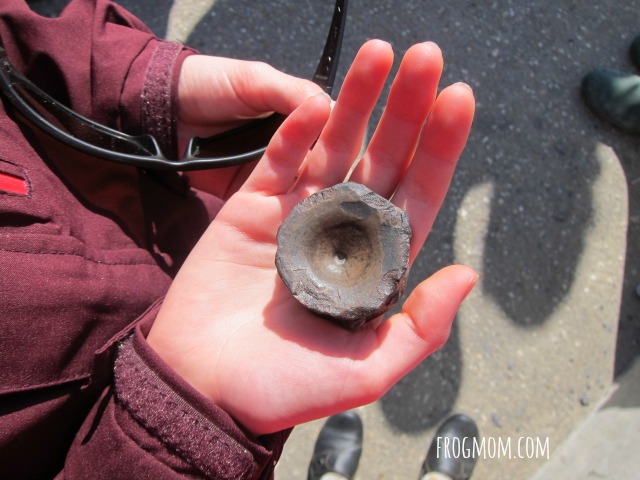 My girls were amazed by two shallow discs that were in fact, mammoth bones. They were incredibly heavy. On the beach, I would have passed right by them, looking for fancy shapes or leaf prints. Rookie mistake. Our guide told us that the best fossils looked sometimes deceptively like the rest of the landscape. Only trained eyes and careful beach-combing can spot anomalies in shapes or patterns. This is one family activity where patience and perseverance are rewarded. 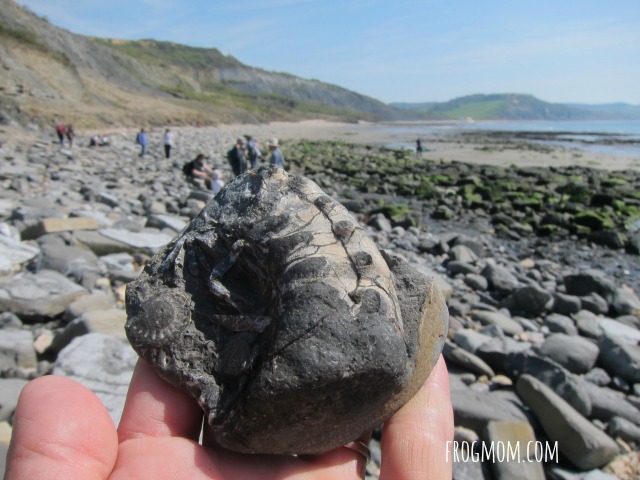 The best place to look for is in pebbles and boulders, so we spent a lot of time craning our necks, bending over, digging sand with our feet and moving pebbles around, all in the hopes of finding a perfect ammonite. My 10-year-old was especially keen to bring an ammonite back to her dad and she was lucky to find two nice specimens. Some ammonites found by other people included extraordinary features, such as double fossils and even, a precious iron pyrite fossil that looked like gold. No wonder, since iron pyrite is also known as fool’s gold. 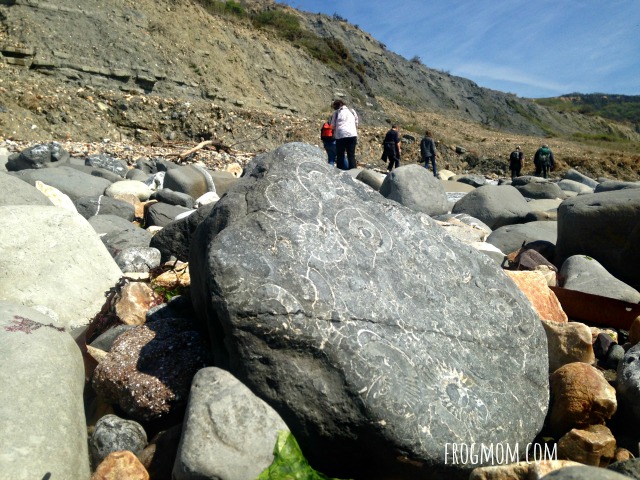 We were familiar with the snail tell-tale shape of the ammonite and once we’d spotted one on a big boulder on the beach, we started noticing them everywhere. My, Earth was Ammonite Central during the Jurassic period! 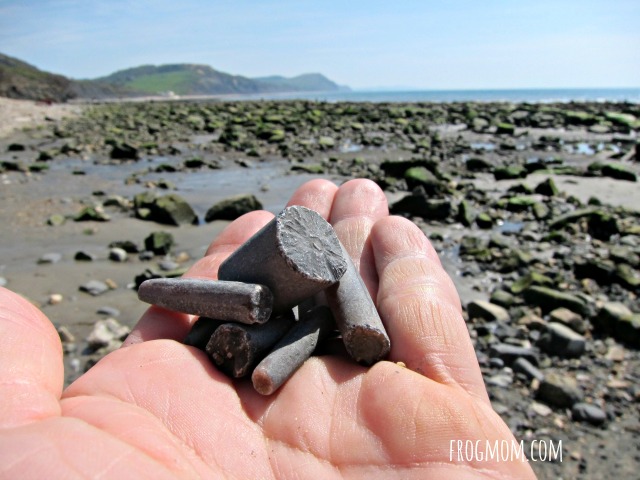 We also learned to identify belemnites, squid tentacles often broken into finger-size pointy tubes that look like grey kids’ chalk for black boards. However, not all fossils could found easily and that was the trick. Not all fossils were visible to the eye. Some had’t been exposed to the elements yet. 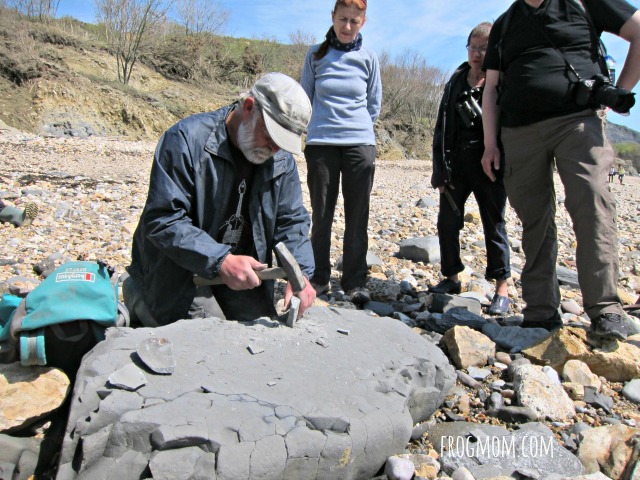 As a last resort, another way to find fossils was to smash geodes and hope to find perfect fossils inside. I should say that this was not the recommended option, from a safety and conservation perspective. However, our guide knew what he was doing and collected a dozen geodes on the beach, which he later hammered to the evident satisfaction of the kids who all had a go with the hammer. In them, he found enough ammonites that everybody walked away from the guided tour with an ammonite in their hand. How cool was that?

What Else To Do Around Lyme Regis 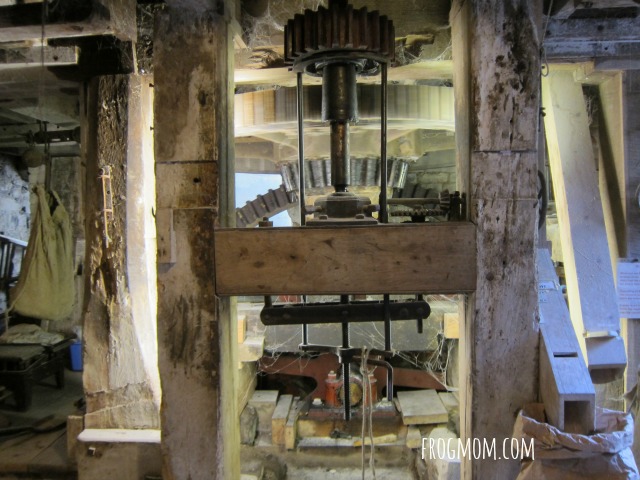 A few minutes walk from the beach, the Town Mill was a great spot to visit a restored old working mill and talk to the miller about the town’s history. We had lunch in the Courtyard Café adjacent to the mill–great lunch plates and cakes–and bought two different types of stone-ground flour with a small recipe booklet to bake breads and cookies at home. 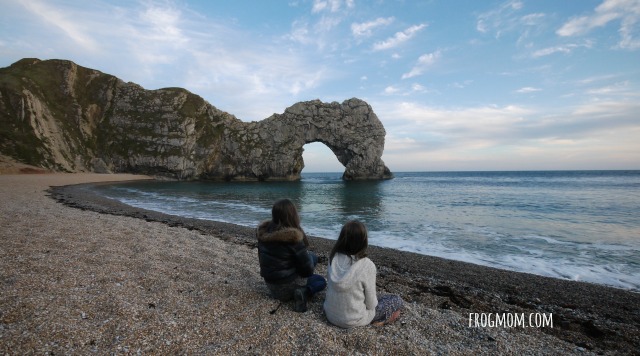 Further afield, Durdle Door is an absolute must-see to contemplate a natural bridge arching over the sea. It’s sadly under a private trailer park, which provides a great view to sea-front RVs, but not such a great view for visitors. It also makes the parking lot outrageously expensive, as it’s private land. I later had the pleasure to swim under Durdle Door and it was great fun, though I did wonder if the door was–or not– going to crumble down on me as I swam under. Good news, it’s still standing strong. 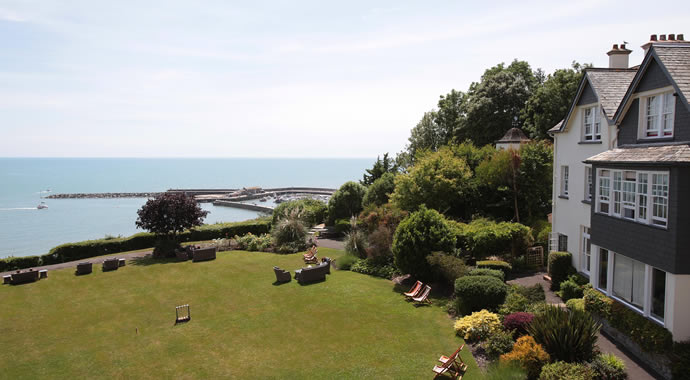 We stayed at Hotel Alexandra in Lyme Regis, an 18th century hotel that’s been renovated with families in mind. Our mini-suite had three beds, a double bed and two twins in a loft, and my girls absolutely loved climbing up the ladder to go to bed. The buffet breakfast had a lot of variety but my girls’ favorite feature was receiving a chocolate ammonite from a local chocolatier upon arrival. Had we not joined a fossil hunting walk, they would have been content with a chocolate fossil.

I’m really glad that my girls expressed an interest in fossils at the Natural History Museum because without this motivation, we would never have discovered this beautiful part of England. We’ll be back, there’s a disused train station-turned-restaurant in WestBay that we haven’t explored yet.