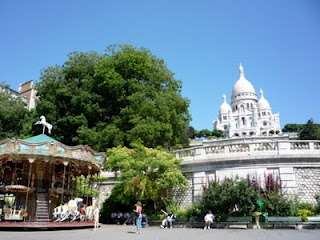 Quintessential Paris features late night walks by the river Seine, gourmet eateries, and world-class museums – until you travel with kids. That’s when you wonder what, in the name of the Holy Baguette, Parisian parents do with their offspring! Surely, they can’t hit every single high fashion store with a toddler in tow on the Left Bank before sitting down with merlot at a starred bistrot. Or can they?

That’s in essence what my friend Jenny truly wanted to know when she wrote me: “We are finally starting to get ready for our trip to France and trying to line up some good kid activities in Paris. Do you have any good recommendations or sources of recommendations that we could use?” Over the years I’ve taken my girls all over the City of Lights and I’m getting my Parisian trips down to a nice routine with “pilgrimage” stops. Based on my experience, here four itineraries that will appeal both to kids and parents.

Start with a crowd-pleaser. Montmartre might be tourist heaven on earth but it’s still as picturesque as portrayed in the movie Amélie. The hilly borough that once hosted the likes of Toulouse Lautrec and Paris’ bohemian artists in the early 1900s is cross-crossed by narrow cobblestone streets leading to the Place du Tertre where caricaturists and portraitists outnumber locals. At kid level, Montmartre hides a different layer of fun.

At the bottom of the hill, get off at the métro stop Anvers or Les Abbesses and find the Manège du Sacré-Coeur, an old-fashioned double-decker carousel with turn-of-the-century animals. My girls love double-deckers, they’re the best to wave to your folks from up high! Once that’s done, leave the square to count  the steps up to the Basilique du Sacré-Coeur – 237 is the magic number.

With a stroller, you’re better off hopping on the mini cable train called Funiculaire. It gets you up to the top too where you find the Basilica of the Sacred-Heart. The iconic white church that overlooks the city was completed in 1919 and is well worth a visit inside. Try to see the creepy arched crypt, it is quite stylish. If you are lucky you’ll hear the amazing pipes of the organ.

From the basilica, take the rue Saint-Eleuthere to the Place du Tertre and enjoy the artists, the sidewalk cafés and the crowds. Cross the square onto the rue de Norvins down to the Place Marcel Aymé, a teeny tiny square with a wall. There the kids will find a man sticking out of the wall, a tribute to a 1943 novella by French poet and writer Marcel Aymé.


In the story, a man swallows pills that enable him to walk through walls in Montmartre. He falls in love with a neighbor’s wife. It’s all good until things turn sour and one day he’s stuck half way through a wall. Here he is now, forever brooding over his fate.

For a bite around Montmartre, find the Patisserie Couderc, 1 bis rue Tardieu and its delish pastries, or sit down at the La Galette du Moulin, 1 rue Veron, for sweet and savory crepes. For gourmet eats, the Bistrot Le Miroir, 94 rue des Martyrs, is where it’s at.

Blending tropical greenhouses such as the Conservatory of Flowers in the Golden Gate Park and a stunning natural history museum like the Smithsonian, the Jardin des Plantes is a must-see for garden lovers. This 400 years-old green sanctuary succeeded to the royal botanical gardens and counts several themed gardens where kids can try to guess the name of plants, run down alleys or spy ducks on lily ponds.

Before any museum visit, I recommend hitting the Dodo Manège, a quaint carousel where animals are all extinct species from long long ago. My girls both went for the  Sivatherium, an odd blend of giraffe and elk that roamed savannas 10,000 years ago. It’s one of the few moving animals on the carousel anyway. Little kids can go the Dodo way in all safety!

Move on the Museum National d’Histoire Naturelle whose Grande Galerie de l’Evolution presents a Noah’s arch parade  of animal species on earth, all lined up on the ground floor of the big hall. Visually it’s striking. Little kids might get bored – the museography is somewhat stuffy – but adults will love the feel of the building. Ask at the counter for big kids’ activities in English.

Whenever I go to the Jardin des Plantes, I never fail to take my girls to the Café Maure, the restaurant at the Grande Mosquée de Paris, 39 rue Geoffroy St-Hilaire, right behind the Jardin des Plantes. With its arched terraced patio where fig trees shade round tables with mosaics, you’ll feel transported to another region of the world altogether. Honestly, my girls didn’t care for the oriental pastries (they sure are sweet and nut-intensive) but they enjoyed an orange juice while I sipped a Moroccan mint tea. Rumor has it the savory couscous at the indoors restaurant is so-so but the great decor might win you over. In any case, kids can have fun in the patio. No one will tell them off for playing in the trees.

A green foray in the Latin Quarter, the Jardin du Luxembourg is another staple of Parisian Sundays and the opportunity for you to combine shopping, great food and fun. Hop off the métro at Saint-Sulpice and admire the church on the square, right across from a former fire station. The surrounding streets are temples of fashion, lingerie and haute patisserie, not the least of which is avant-gardist pastry chef Pierre Hermé (see below in Dining).

Zadig et Voltaire is one of my fave clothing stores and their children line is a killer – both in looks and price tags. Further east at 78 rue de Seine (cross street Saint-Sulpice) you will find a candle store like no other, Maison Cir. They make the nicest birthday candles and I find it very hard to resist to their fragrant candles.

Anyhoo, after you’re done browsing, head to the nearest entrance of the Jardin du Luxembourg. Here is a map with access points and activities. I took my girls to the Saturday afternoon Guignol puppet show (French Punch and Judy) and it was a blast. The show features 30 uninterrupted minutes of puppets playing around on various sets with furniture, set to recorded music and voices. Since the show is all in French, non-Francophile kids might find it harder to relate but the slapstick comedy is universal.

Outside by the octagonal pond, kids can rent and float model sailboats by the half hour – real mini sailboats with wooden hull and canvas sails!

The only playground is a Parisian shocker: kids pay to get in! It’s weird but we paid anyway since my girls were drooling over the jungle gym and zipline. We stopped our exploration there but tiny eateries can keep you longer.

You have to go to Pierre Hermé, if only to sample the macarons with unusual flavors such as quince and rose and tangerine and olive oil. They’re the bomb! Kids will most likely find a pastry they fancy. For the real thing (as in, savory), the Grande Epicerie de Paris (@Le Bon Marché) is a high-end food store with three restaurants from gourmet fast food to full-on sit-down meals.

Did you know there were covered streets in Paris called Passages? Drilled as all-weather shopping passageways between busy bourgeois streets in the 1850s, their distinctive arched glass ceilings and artsy paved floors are total eye candy for photographers. On rainy days, they’re also great options for kids to run around “outside”.

Recently I took a Hungarian friend of mine through a dozen of them in 2 hours, starting at the Tuileries and finishing north of Le Marais. My kind of urban hike!

All passages are lined with shops and cafés but two passages will appeal to children for their incredible toy stores: Passage des Princes and Passage Jouffroy. The latter is where Au Pain d’Epices ravishes young and old with wooden toys, doll houses and plush animals.

When you go, see at least the Passage des Panoramas and the Galerie Vivienne – they’re the most spectacular. North of the Passage Verdeau at 35 rue du Faubourg Montmartre, you will find A La Mère de Famille, Paris’ oldest sweet shop and one of our regular stops.

There I buy candied violet petals to decorate my cakes, old-fashioned fruit lollies, fruit leather and stuffed prunes. I always let my girls pick one bag of candies, a tricky choice which takes them forever since there are so many jars filled with delightful items.

I never know what my favorite things are in Paris. I lived there 10 years and it seems there’s entire worlds I don’t know about in the city. There’s just so much to do and so little time. All I know is that my girls love going there, taking the métro and eating out. For them, Paris is a big playground with fun stuff at every street corner. I guess that’s the gist of vacations! I hope your kids like it too. It may not be the most child-friendly city but there’s a lot to do with the junior crew to satisfy all ages.

4 thoughts on “Four Itineraries to Discover Paris with Kids”