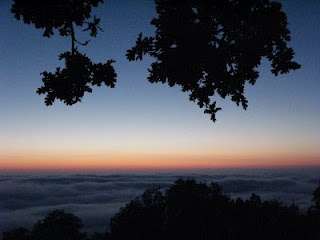 Fremont Peak officially kicked off our camping season. As each Memorial Day 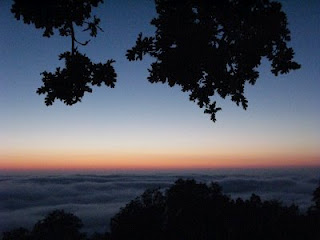 weekend for the past four years, we went camping with a group of friends. So far we’ve experimented with various group sizes, weather and locations such as Shaver Lake (it snowed on the pine forest), Lake Isabella (we baked on the lake’s muddy shores but enjoyed beautiful starry nights), Malakoff Diggins (we withstood three days of rain in a superb landscape), and now Fremont Peak.

A small park (there are exactly 25 camp sites), Fremont Peak offers a very particular climate feature: it (usually) overlooks a sea of fog and the fog is not even fifty yards below. This photo shows a sunset on a thick blanket of fog, not on the ocean. 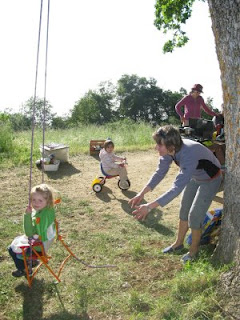 rove up, we could not believe how overcast the area was until suddenly, we emerged out of the fog in the sun. An experience that could be compared to having a window seat on an airplane that flies through the clouds into the sun. That’s what I call a micro-climate.

Fremont Peak State Park is, as described by the almighty Tom Stienstra, “often overlooked” by people who travel to Monterey. And yet, less than two hours from the Bay Area, it qualifies as a camping hot spot. Why?

Two words: primitive campground. Fremont Peak has a lot of “no’s” when it comes to facilities: no sinks, no showers, no recycling (or I couldn’t find it), no vault toilets (think pit with smell attached), and no room for two cars (although campsites can accomodate 8 people…). We were lucky to get the best view, our own faucet and a lot of space with number 25, but our friends at number 19 were literally in their neighbors’ close backyard.

The park’s huge pluses though? The view is really hard to beat. The hills are pine and California oak woodlands covered with tall grasses swaying in the wind (of which there is a lot, si 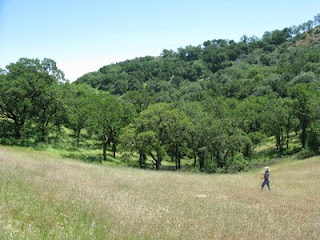 nce it’s a peak). And …. there is an astronomical observatory with a 30-inch telescope on the peak.

A state park where you can take a walk in the dark from your campground to the local observatory ten minutes away and look through the lens of a dozen of serious star enthusiasts’ telescopes before you get in line to see Saturn with its rings through the big telescope? Now top that! 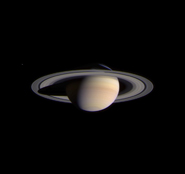 actually what draws campers. Across from us at the campground was Bob Black, the membership chair of the Fremont Peak Observatory Association, a fervent education advocate for the city of San Carlos and astronomy teacher for middle grade kids. Bob is that passionate that he comes once a month to pitch his tent at Fremont Peak. He arrives way early in the day to get the only non-reservable camp 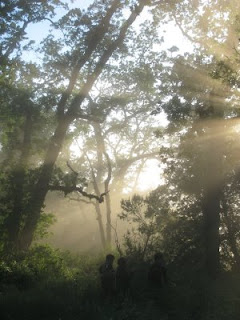 site because it’s such a prime star gazing spot. Ominous number 14. Then he sets up his telescope (one of six) and wraps it up in thick NASA-type silver foil until night sets in and the stars of stargazing align.

So yes, astronomy is huge at Fremont Peak. When we admired Saturn through the telescope, I was dumbfounded. I had never really seen Saturn before I guess. It was so perfectly round and so black-and-white bright that it looked, as my friend Sue put it, “like a sticker on the lens.” A postcard perfect Saturn.

That was a big hit with the children, although slightly conceptual for the youngest. Yes munchkin, the celestial object that looked the size of a distant apple is actually 762,700,000 miles away. Sure, let’s walk back in the dark. Ah, the forgotten charm of walking in the dark without flash lights because it disturbs star viewing. 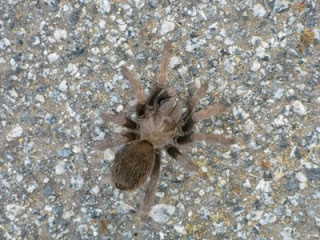 trees with its chill. The children were playing in the woods when word spread like firecrackers: there’s a tarantula on the parking lot! Legs rushing, loud voices, more legs. They all ran downhill to see the “monster” which looked in fact quite scared.

The lonely tarantula was one of many wildlife specimens that crossed our path on Fremont Peak: skunk, grasshoppers, roly-polys, hairy itchy caterpillars, black beetles and more. For once, our bug box got a lot of mileage.

However for my five-year-old, the highlight of the weekend was a tooth fairy incident. As a result of a pillow fight in the tent, she lost her first tooth and guess what? The tooth fairy also delivers at campgrounds. Fortunately, San Juan Bautista State Historic Park is only 11 miles away and the gift store sells nice shiny copper coins with the Mission’s backdrop. Now that could have been a close call…