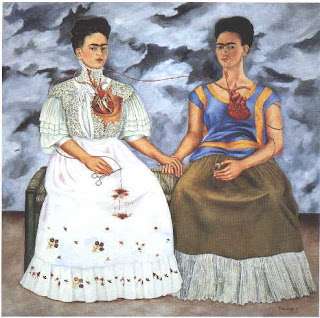 > Frida Kahlo at the SFMOMA

Frida Kahlo at the SFMOMA 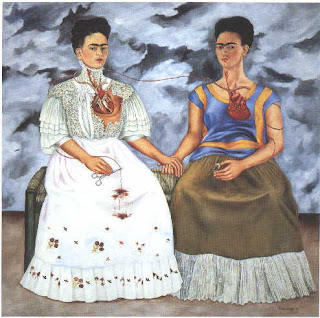 I just attended the press preview of the upcoming Frida Kahlo exhibit a the SFMOMA. The exhibition displays 50 paintings and 75 photographs of the famous Mexican artist. At a time when Europe was embracing surrealism and leaving Dada, she invented her very own Mexican surrealism and introduced a brutal element to it. All folk art, all blood and guts, all passion and all Diego Rivera.

The exhibit also goes over the time that Frida Kahlo spent in San Francisco and I didn’t realize how important episodes of her life had taken place here. In that, the exhibition was a real discovery. However, I wasn’t sure how to react to her art.

The way she exteriorized her immense suffering by splashing it and detailing on the canvas is just extraordinary. I wouldn’t say I’m a fan, but it certainly strikes a chord.

Darkly ironic to think that she would probably not have been a great painter if she hadn’t been hit by a bus at age 18. Since I just finished a course on art avant-garde from the post-impressionnists to modern times at UC Berkeley Extension, I was able to relate some of her paintings to other works that were shown to us by art historian Terri Cohn. 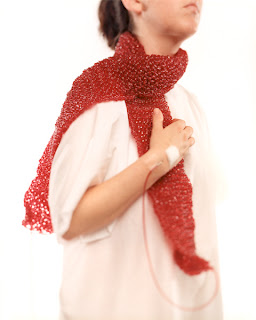 One of the photos that struck me in class was called Blood Scarf. It is a 2002 work by New York based artist Laura Splan. In her own words, “Blood Scarf depicts a scarf knit out of clear vinyl tubing. An intravenous device emerging out of the user’s hand fills the scarf with blood. The implied narrative is a paradoxical one in which the device keeps the user warm with their blood while at the same time draining their blood drip by drip.”

I hesitated between the totally creepy and morbid fascination. Exactly the words that come to me when I think of Frida Kahlo’s art. Indeed, Frida Kahlo self-portraiting herself at length with blood transfusions, insides out, metallic corset and aborted feotuses flying out of her bleeding self, is not a pretty view.

But it works. It conveys a powerful emotion and now that art has separated from traditional media, emotion is definitely a measure of art appreciation.

2 thoughts on “Frida Kahlo at the SFMOMA”