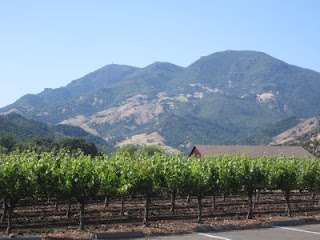 > From Bothe-Napa Valley to the Bale Grist Mill

From Bothe-Napa Valley to the Bale Grist Mill 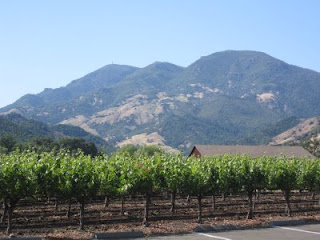 miles south of Chateau Montelena, the winery that put Californian wines on the map with the 1976 Judgment of Paris – romanticized in the Hollywood blockbuster Bottle Shock – lies the sole survivor of Napa Valley’s past as the Golden Valley: the Bale Grist Mill. Before the Napa Valley churned profit from red and white liquid gold, grain farming was the main crop in the valley. Along with fields of grain came a tradition of milling. That was 1846, three years before John Marshall kicked off the Gold Rush.

As we were camping at the Bothe-Napa Valley State Park, we went from Bothe-Napa to the Bale Grist Mill by way of land. Passing by the park’s sprin 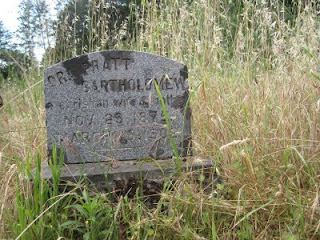 g-fed swimming pool, we veered on the History Trail and stopped at the 1850s pioneer cemetery.

Beneath a hill of rustling wild oats and rattlesnake grass, members of the Tucker, Cole, Kellog and other families lay low in the ground. We entered the white-fenced rectangular plot and looked at the stones. “This one was a baby,” I said. And I read the name and age of the departed: Ida A. Hoover, one year, three months an 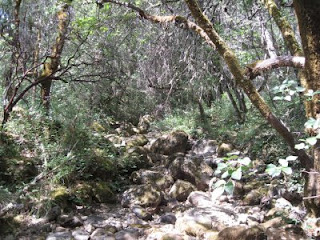 d four days, May 1869 – August 1870. Our children looked down in disbelief. One hundred and thirty years later, from then to now. It was a special moment.

We continued our way up the hill to the ridge before descending through an oak canyon traversed by dry river beds. Along this moderate 1.2 mile hike, we did not meet a single soul and our little ones played hide-and-seek in the descending portions of the trail.

As we finally arrived at the Bale Grist Mill, remains of 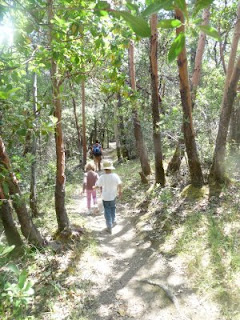 ditches and ponds told the silent story of the once lively mill.

According to the ranger on duty last Sunday, there used to be 18 mills from Santa Cruz to Napa. I think he meant only grist mills as there were for sure a lot of sawmills – take Sutter’s Mill up in Coloma or the “Old Mill” that gave its name to the Bay Area town of Mill Valley, they were sawmills. Anyhow, the Bale Grist Mill is now the only surviving historic mill of its kind in California.

Constructed by Dr. Edward Bale in 1846 and maintained after his death by his wife Maria, the grist mill featured a 36-feet high water-wheel using the diverted waters of Mill Creek through an aerial flume system. The system is still in place and every single weekend, rangers in costumes operate the ma 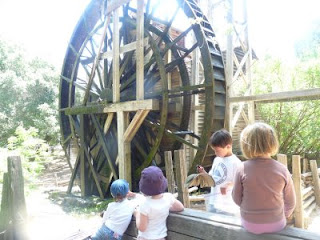 Inside the mill, our children got to follow the grinding process from grain to meal. As Eric the ranger took ears of dried corn in his hands, the children gathered round. They each got an ear of corn and fed it through a hand-cranked machine that separ 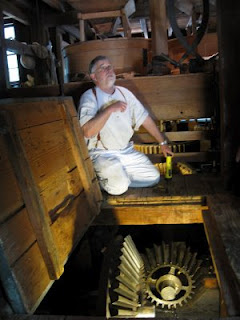 ates the kernels from the ear in seconds.

After that, Eric lifted a trap door in the floor and uncovered the cogs turning below the building. He then showed the big round grinding stones coming from a Parisian quarry (now supposedly underneath Disneyland Paris’ parking lot) and prepared the children for the water wheel.

Before the giant wheel was set in motion, the creaky noise of chains pulling, the smooth sound of belts sliding and the gurgle of water flowing filled the buildin and the surrounding grounds. At full force, it must have been a defeaning noise.

The childen ran outside and watched in awe. Big machines are beautiful things. That day they were grinding corn for polenta. In pap 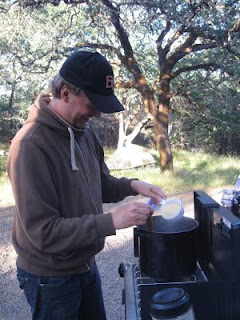 er sacks on a table were other types of flour ground on site: spelt, whole wheat pastry, whole wheat bread, rye, cornmeal and polenta. The children got to pass around wooden ladles of grain before and after grinding. It was great.

After the demonstration, we took a sack of polenta back for the evening meal. At the campground, our friend Klas obliged by following Miller George’s Polenta recipe and the Napa Valley grinding experience came full circle accompanied by bottles of wine from the nearby Summers Estate Wines.

Who knew Napa Valley had a past behind the bottle?