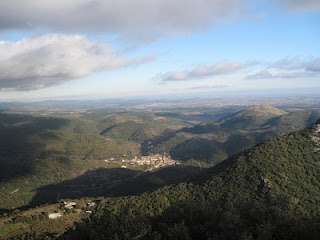 > From St.-Nazaire-de-Ladarez to St. Etienne Hermitage: A Hike Back In Time

From St.-Nazaire-de-Ladarez to St. Etienne Hermitage: A Hike Back In Time

“Apresato Eglise. La meson a été réparée par Vogonien de Riols – 1700.” This inscription, carved on a stained marble stone, hangs above the door of the chapel of the St. Etienne Hermitage in Saint-Nazaire-de-Ladarez. It means that the chapel was repaired in 1700 by a man from Riolsnamed Vogonien. The site is perched atop the mountain and the culminating point (literally) of a hike that starts in St. Nazaire-de-Ladarez.

St. Nazaire is a village in the Languedoc-Roussillon, between Cessenon-sur-Orb and Cabrerolles, in the south of France.

Minutes from the Orb river valley, beaches and white-water rafting, Saint-Nazaire-de-Ladarez was once a 12th century fiefdom with a fortified castle and powerful walls. Roman coins are still found on the mountains trails around. The area oozes buried ancient history but clearly, the economy is dormant at best. St. Nazaire’s golden days vanished in the 1950s when the marble quarries – that once supplied the Chateau de Versailles – closed.

Today, 331 inhabitants live of tourism during the summer months. In late December, we drove there to hike from Saint-Nazaire-de-Ladarez to the St. Etienne hermitage 2 miles up the mountain. We followed curvy roads bordered by vineyards on a background of tall quartz cliffs (Falaises du Landeyran) before arriving on the stone and slate cemetery that marks the border of the village.As in old villages, the center of town is the church plaza where most businesses are concentrated. The baker, the cafe, you name it. We parked there and headed up a side street. Within a few feet, the road gave way to a dirt and stone path climbing steeply through an oak forest. Following the blue markers of the hiking trail was easy and the moderate climb made us cross a fire road several times on our way to the ridge. As the trail was shaded until the very end, this would make for a great summer hike, sheltering hikers from the scorching local sun.

On the ground, we noticed several spots with empty bogs of chestnuts on the ground. Wild hogs, avid chestnut eaters, are active around there judging by the number of hunters we saw stationed in folding chairs by the road. Every now and then, chestnut trees were mixed with strawberry trees (arbousiers) whose spiky red berries covered the underbrush too.

Strawberry trees are so common around here that people (especially old timers and hippies – of which there are a few communities) harvest the fruit to make sweet jams and preserves of a lovely color and despeately bland. There are lots of strawberry trees on San Francisco streets and here is a recipe for arbous jam.

Another specificity of the the ground around St. Nazaire-de-Ladarez is the presence of slate shards all along the trail. We noticed their shiny black scaly cuts more and more as we got closer to the top.After a Y fork we took a left and finished the final ascent to the top. The view was outstanding. At the bottom of the valley lay the village with its beige and ochre hues. Across from us, another mountain showed a straight white line.

“See that line?” my father said, “It’s the wall of a Gallo-Roman villa.” I was blown away. This was not a small wall by any means. At 1,350 feet below the Puech de la Suque, the dry stone wall is 300 feet long and 6 meters high and wide. It must have been quite a settlement. However closer to us, we turned to the St. Etienne Hermitage.

What a lovely lonely refuge from the world. A mixture of local stones and whitewashed mortar, the building is L-shaped and includes a small chapel as well as two square rooms. The chapel iron door wasn’t locked and we pushed it open.

There used to be an hermit living here. He travelled from village to village, worshipping St. Etienne and receiving food in exchange for his prayers. What a weird life the guy must have had, trekking back up to his stone bare-bones chapel each night. Let’s hope he had a donkey.

Some say that the first religious building here was Roman as Roman tiles were found in the adjacent quarry. However, the current structure is more recent and a 17th-century altar salvaged from excavations gives a hint as to the age of the hermitage. Historians even found an altar dating back to Carolus Magnus but it must be in a museum somewhere.

The two back rooms were closed and it’s only by peeking through a side window that I was able to see them. Bare and empty with vaulted ceilings – slightly creepy too – there may have been a floor between the two openings. To store hay or wood in the winter? I wonder where the hermit got his water. A gust of wind blew on us, making us zip up or button up our tops. Soon the sun would come down.

We started our descent and were back at the car in less than an hour. Half way down, well-rounded “clonk-clonk” sounds came to our ears, followed by loud barks. The village’s cows were being herded by the dogs. It complimented the picture nicely.

All we needed now was a shepherd playing the flute at the edge of a well – so we would feel we were back in the 1900s. No shepherd in sight. The cafe was closed, we forgot our hope for a hot chocolate. We got in the car and bade farewell to St. Nazaire-de-Ladarez.

If you ever go there, there is a town pilgrimage to the hermitage every May (Pentecost holiday). It’s probably your only chance to see the chapel alive.

2 thoughts on “From St.-Nazaire-de-Ladarez to St. Etienne Hermitage: A Hike Back In Time”