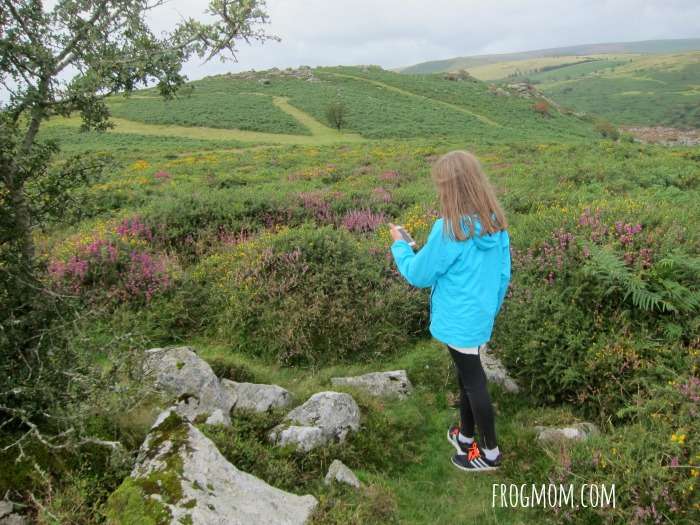 When I asked my 12-year-old for a geocaching app review, she was all abuzz. She’s got a knack for finding stuff on treasure hunts (including chocolate eggs at Easter) and is a Google Maps wiz. Since geocaching consists in finding hidden treasures using GPS technology, she wanted to experiment on my iPhone 6. We had already tried geocaching with a GPS device in the spring but it kept bugging and the caches were tricky to spot. It hadn’t been a great success at all.

Could she find a geocache with the free iphone version of a geocaching app? Could geocaching be a fun way to spend a day outdoors for kids? Would she recommend the app to her friends?

I’m not a mobile device fan on the trail by any means, but this could potentially unlock new adventures outdoors and it was worth a try. My daughter downloaded the free Geocaching app by Groundspeak, Inc. on the train, I created a user ID and she launched the app during a hike in the Dartmoor National Park in the UK.

While this app is not specifically made for kids (with cute icons and fluffy teddy bears), I wanted to be sure that an older child would be able to navigate it without parental assistance. If my 12-year-old could do it, chances were that other kids her age would get it too. 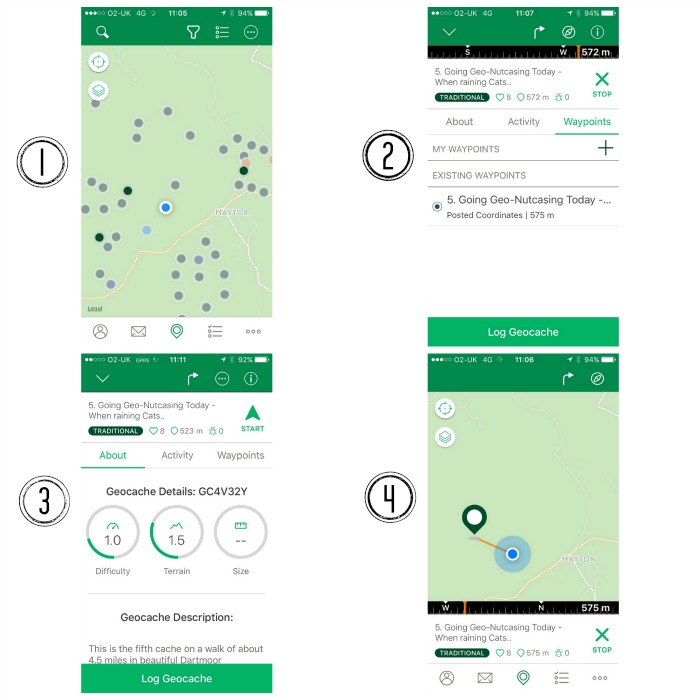 Geocaching App | In the Field

When my daughter activated the geocaching app, we were standing at the bottom of a quarry surrounded by a circular dirt wall. This was the screen she had. 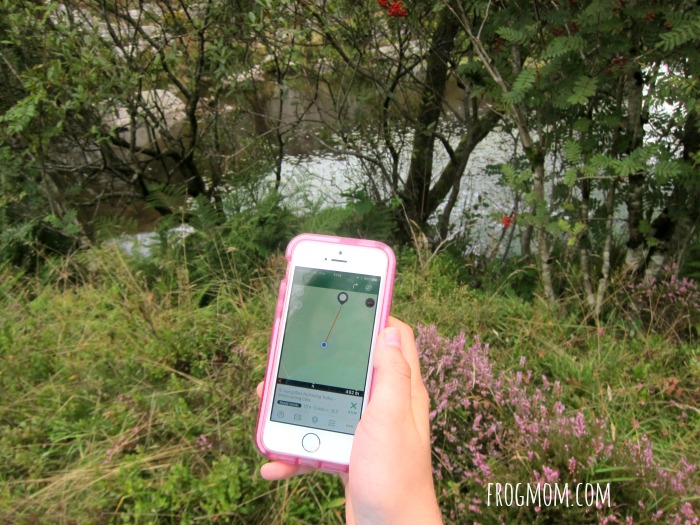 Looking at the screen, we had absolutely no idea where the geocache might be nor in which type of landscape. The area around us on the app was featureless and solid green. Judging by distances, the geocache was hidden outside the quarry pit but other than that, we had no clue. We exited the quarry using a steep trail and my daughter pointed the app compass toward the geocache. Time to go on a hunt! 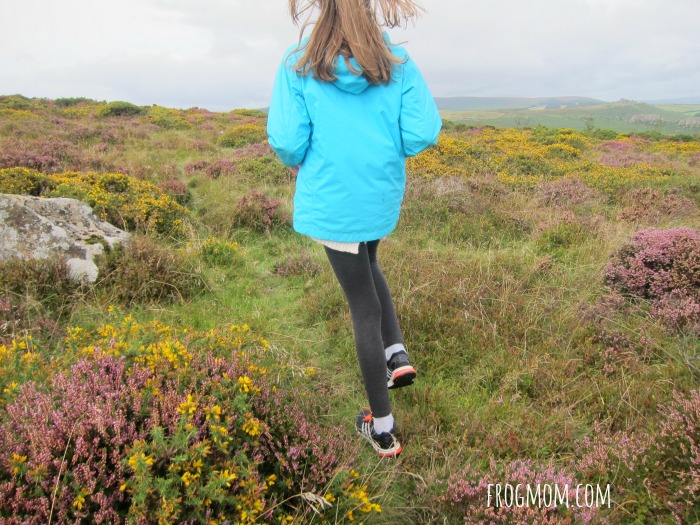 The trouble with this app–and the nice adventurous thing, too– is that it doesn’t come with a topo map of your geocaching grounds. You can’t see existing trails or physical features, unless you open the navigation using Google Maps and switch to Satellite view. We weren’t that fancy and started going cross-terrain like two hungry rabbits, completely disregarding trails or small hills. All we wanted was a straight line and the shortest route. Not exactly the best strategy.

Luckily, the moorland was ablaze with late summer blooms and the landscape was lovely. However, we soon found ourselves blocked in prickly gorse bushes and dense purple heather. We needed to find better terrain to walk on. Looking around, we searched for people walking in the distance as they might give us hints as to where existing trails were. From where we were, trails were blocked from our view by the vegetation. After spotting a few hikers, we retraced our steps to an opening in the heather and found a wide grassy trail. The going was much easier and faster on this trail.

When my daughter got within 50 meters of the geocache, a message popped up on the screen to start looking. Sweet! We slowed down and looked all around us, as if a giant geocache was going to materialize under our eyes. Of course, we would need to put more effort to find the treasure. Geocaching is a game after all. It’s not about handing out freebies. You need to earn your geocaching badge.

When you finally reach the location of your geocache, you still haven’t found it. You know that it’s somewhere near you, but where precisely is anybody’s guess. You don’t know whether it’s a plastic container box with notepad and pencil (traditional geocache), a plastic tube stuck in a hollow tree stump, under fake poo in a brush or in a fairy house in a wooded forest. No kidding, geocachers can be very creative so your kids will have to look with an open mind. 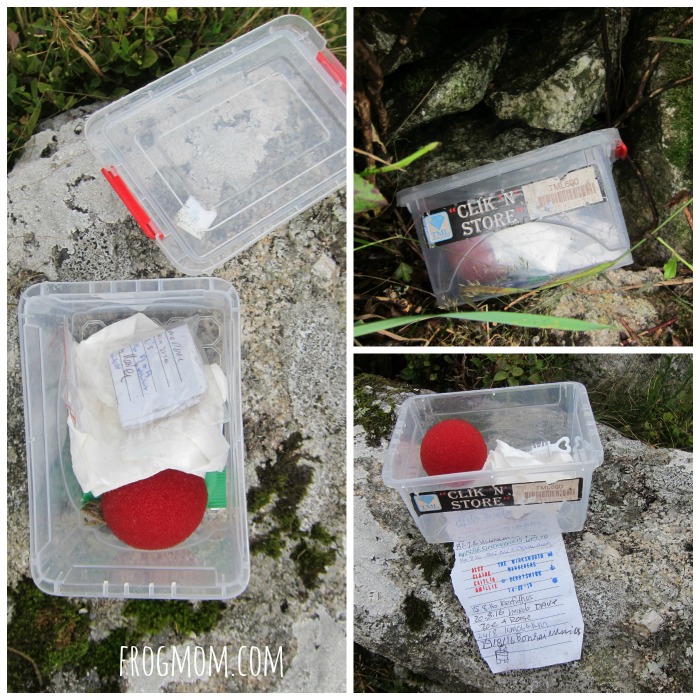 Lucky for us, looking under a rock was our first reflex and it worked. It was the right rock (there were a few) and the geocache was a clear plastic box tucked deep behind another smaller rock. Eureka!

Now, we could officially acknowledge that we had found the geocache. My daughter opened the app, logged her find and added a note. 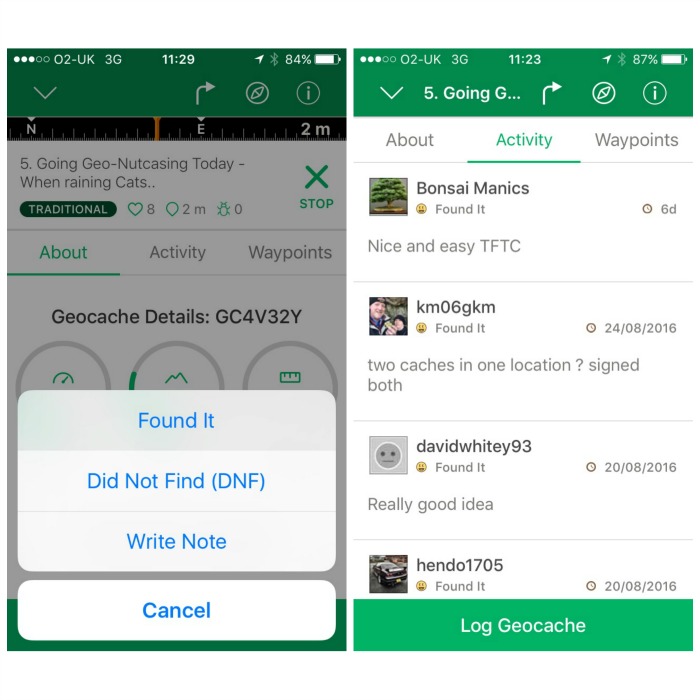 I like that this Geocaching app lets you interact–even if indirectly through notes–with the geocache creator. I hope that they check their geocaches on the app once in a while, because it must be rewarding to see people are so happy to find them.

Now, two quick pro tip about geocaching–always bring a pen and a treasure. 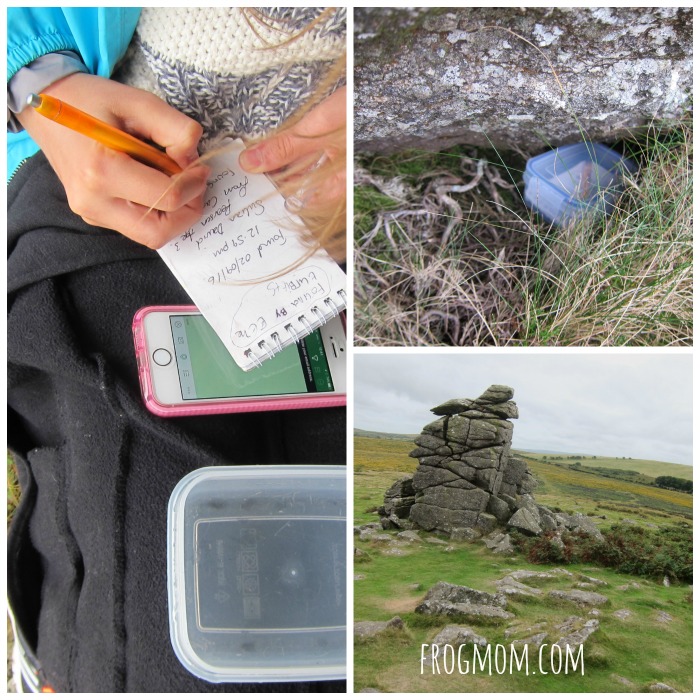 By sheer coincidence, we found a second geocache that day during our hike. We weren’t looking for it, I swear. My daughter and I just wanted to take shelter from fierce winds and found a hole under a rock. In the hole, there was another clear plastic box. This time, my daughter didn’t hesitate for one second.

Of course, anybody can upload a note on the app if you find the right geocache but traditional geocaches usually have a piece of paper to scramble on and it feels more adventurous anyway. However, pencils go missing and you can’t expect geocache creators to go around maintaining the contents of the boxes. Ergo, you better have your own pencil if you want to record your fabulous discovery on paper.

Last but not least, the treasure exchange system is part of what makes geocaching super fun for kids but let’s face it–who doesn’t like any sort of treasure, even if it’s a peppermint tea teabag? That’s the treasure that my daughter picked from the first box and that she replaced with a bubble wand. The second box didn’t have any treasures but we put one in anyway, for the next person. Treasures can be anything as long as they’re small, non perishable and fit in the box. Your pick.

Geocaching App | Is It Worth It?

After our hike, I asked my daughter what she thought about the app.

“I never thought I’d find a box with stuff inside,” was her first reaction.

For her, finding the actual geocache was a surprise as she didn’t believe that people would leave boxes with stuff outside. I agree, it’s unusual but as our experiment showed, it works.

She also enjoyed the “treasure exchange” system and I’m with her on that. It wouldn’t be as fun to find a barcode printed on a plaque or a teeny pop-up message on the app saying “you found it!” Finding an actual random treasure left by someone else is quite exciting and it’s almost as exciting–if not more–to leave a treasure behind.

Geocaching App | Would She Do It Again with her Friends?

Totally. She actually asked me if there were geocaches in the city and the answer is yes. Chances are that we’ll look for urban geocaches very soon. We might even create new geocaches. Now that would totally take geocaching to the next level but we aren’t there yet.

Have you ever tried geocaching with your kids?