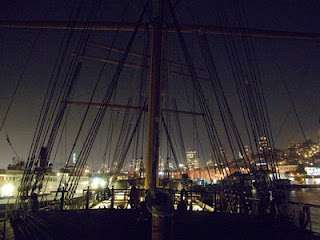 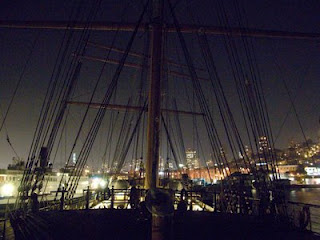 How often do you attend a concert at San Francisco’s only national park? Yes, there is a national park in San Francisco and it’s not the Golden Gate Bridge. It’s not Chinatown either. Don’t you know? It’s the historic ships at Hyde Street Pier.San Francisco night lights viewed from the Hyde Street Pier with a chilly breeze in the neck is pretty close to heaven. Extra points if parking was suspiciously easy, McKormick’s had a table at the back of the bar and the NPS guy hands us our concert tickets within seconds. Yes we’re attending a concert.

After my “yo ho ho” pirate adventurestwo weeks prior and our concert mini-series, we combined the best of both worlds with a sea chantey (sailors songs) concert.

Now, I’m not usually the kind to venture into a concert when

– I don’t know the singer

– I have no idea what he sings

– I have no idea where it’s at

Yet, a concert aboard a 1886 square-rigged ship tickles my curiosity. What could it be like? Worse comes to worst, it’s a night out without the kiddos and that’s enough to do the Snoopy wacky dance. At best, we might actually enjoy Geoff Kaufman’s performance. And we did.

Chances are you don’t know Geoff Kaufman, the self-described “folk singer with a pinch of salt”. Let me tell you. All the people attending the concert are big time Mel-type fans of Geoff Kaufman. Mel is the female fan stalking the band in Flight of the Conchords, the HBO series. It was that type of crowd just slightly older. 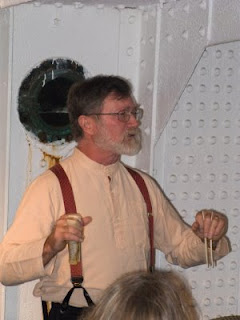 Laughing at Geoff’s jokes, helping him out with some lyrics, furiously clapping after each song. What a trip.

When we sat down, Geoff Kaufman was already singing. As the chorus started, everybody around us joined in. I mean, every single person sang along. My husband and I stared at each other.

Did the others have cheat sheets? Nope. The front row ladies sang in seconds, thirds and in harmony! As Geoff ends the song, a furious round of clapping followed.

Then Geoff gets two pairs of “sticks” from his pocket. “Rib bones gain an interesting quality as the marrow dries out,” he says showing them. “They have a more hollow sound.” The bones were his music instrument for the next song. Other instruments included a guitar, a concertina and a small flute.

As the evening went by, we regretted not being Mel-type fans of Geoff Kaufman. Some of the songs were incredibly beautiful, like the one about the Island of Mingulay that Geoff Kaufman introduced with: “the rhythm is fabulous for rowing.”

All of the songs had stories to them. There’s the song about a whaler built in 1841 and its British sailors dealing with Spanish ladies of Tijuana. There’s the gorgeous song called Ambletown in which a sailor at sea receives a letter from his wife announcing a baby to be born.

Totally enthused, I bought the CD entitled Fair Stood the Wind. Too bad it doesn’t come with the fan audience. I’ll just wait for Mr. Kaufman to come back to our friendly shores. Then maybe I can sit up front too!