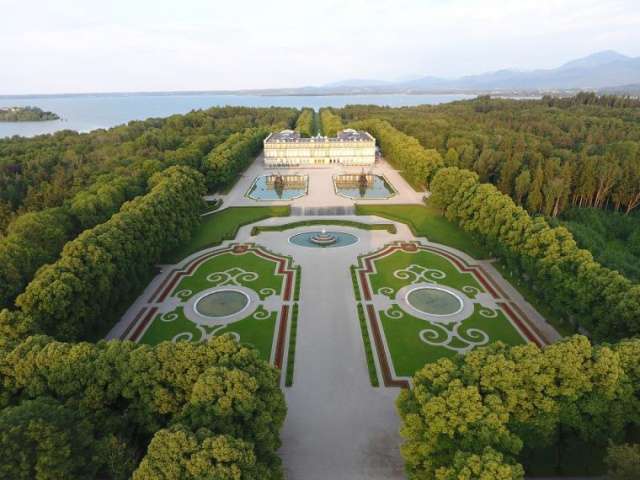 Ludwig II of Bavaria built many extravagant castles during his lifetime but none more extravagant than Herrenchiemsee Palace, a larger-than-life replica of Versailles on an island in the middle of Lake Chiemsee in Bavaria. When we toured Bavaria in April 2019 with my parents, my brother and my family, we didn’t miss a single one of Ludwig II’s castles. From the baroque opulence of Linderhof, to the Medieval revival airs of Neuschwanstein or the 19th century prestige of Hohenschwangau castles, we saw them all but Herrenchiemsee Palace had something none of the other castles had – solitude and atmosphere. It was perhaps the only castle where we got remotely close to having an idea of the life of the monarch who built the castle and that in itself, was worth every shiver outside on that chilly April day.

We arrived by the shores of Lake Chiemsee around lunchtime and once parked at the ferry harbor at Prien, headed to the closest restaurant for lunch. Luckily, the restaurant facing the pier could accommodate our party of 8 and soon, we were feasting on seasonal white asparagus, freshwater fish and schnitzels. 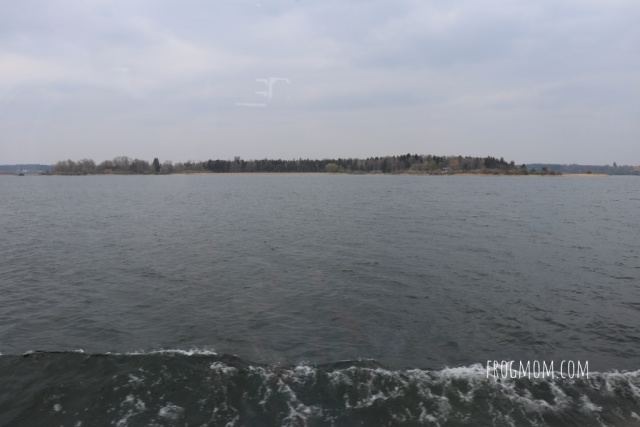 After lunch, we headed to the ticket office and bought tickets including the ferry trip, the entrance to Herrenchiemsee Palace and the monastery. Though we would have liked an ice cream before the ferry, we hurried to board a departing Chiemsee Schifffahrt and missed out on ice cream, which was a bad idea anyway as it was freezing outside. 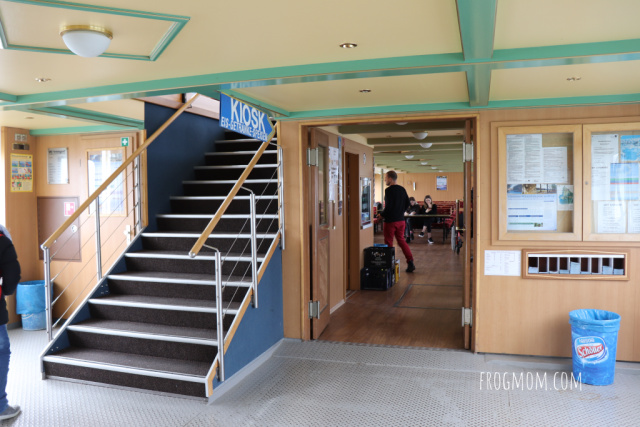 Once on board, we retreated to the lower cabin where we were sheltered from the cold wind and warmed us up. Ice cream, what were we thinking. A cup of tea did us all a lot of good and 20 minutes later, we spotted Herreninsel – literally, the island of men – from the windows of the ferry.

The largest of three big islands on lake Chiemsee, Herrenisland is only inhabited by 30 people whereas nearby Fraueninsel – the island of women – is inhabited by 300 people. I’m not really trying to prove a point here but as you can see, the island was practically desert to start with.

We docked at a charming boathouse and out of the boat, had a moment of reckoning. We knew we had to get to Herrenchiemsee Palace at some point to visit the interior but 1) how far was it to walk? 2) could we visit something else before? and most of all, 3) why was it so cold and windy?

The far part, we sort of resolved by reading a sign about 20m from us: “Herrenchiemsee Palace – 20 minutes.” Right, that was actually handy. We assumed these were 20 ‘Google Maps’ minutes, as in somebody who walks at a good medium 3 miles/hour pace. Since we walk on average 20% faster than Google Maps, we then looked at what we could visit on the way. As luck would have it, there was a sign to the Augustiner-Chorherrenstift Herrenchiemsee (Altes Schloss) and this was literally above us. Good find. Now, the cold bit. Since the only way to fight the cold was to walk vigorously or to take shelter inside, we didn’t linger.

With my mother was in a wheelchair (with a wool blanket), we figured out that we’d split into two parties. Our guided tour at Herrenchiemsee Palace was in an hour. My mother, my father and my brother would head leisurely to Herrenchiemsee Palace while my husband, my two daughters and I would rush to the Augustinian Monastery and catch up with the slow pokes at the palace.

On first impression, the monastery was frankly boring. After we entered the monastery, now a museum, we walked down long hallways and found big empty rooms with paintings, a music room (entirely renovated) and rather empty kitchens. On the ground floor was an exhibition on WW2 politics in Germany, an interesting topic surely but panels were all in German so our understanding was limited. 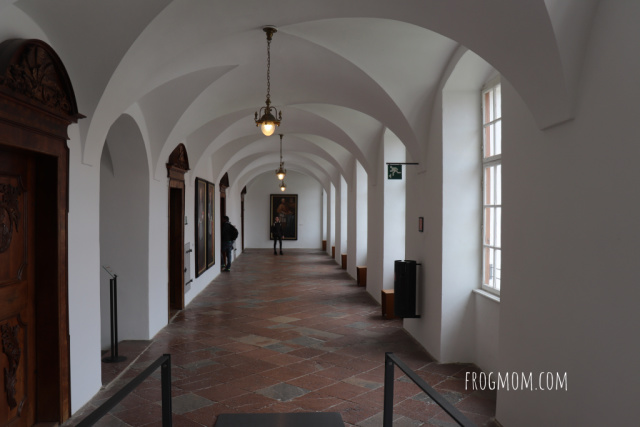 Never mind the ground floor, the first floor (or second, if you’re from across the pond) was where the good stuff was at. When King Ludwig II of Bavaria was building Herrenchiemsee Palace, an enterprise that kept him busy the last 8 years of his life, he stayed at the Augustinian Monastery in rooms that can be best described as comfortable but not over-the-top luxurious. To make it official, the former Herrenchiemsee monastery was converted into a royal residence known as the Old Palace (Altes Schloss), while the king built Herrenchiemsee Palace also known as the New Palace (Neues Schloss), the largest of his palaces.

While Ludwig II’s reign is best associated with adjectives such as extravagant, splendid or dreamlike, the Altes Schloss was none of these. Though slightly luxurious, it served a practical function. Almost by ourselves, we visited the stately rooms that formed his apartments. Only the bedroom, with a single bed, and an adjoining living room, indicated that the place had been lived in. The rest might just as well have been for show. 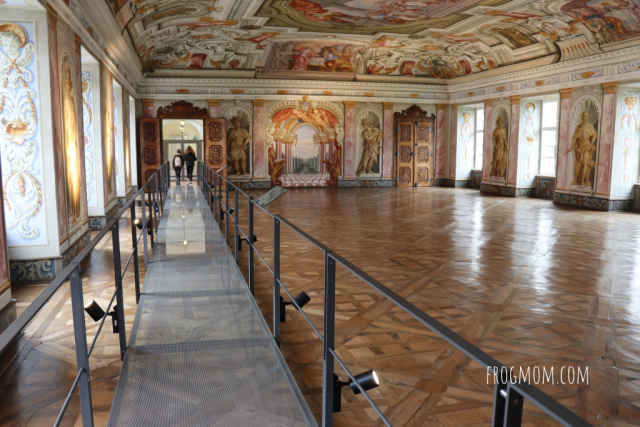 The ballroom surrounded by busts of Roman Emperors particularly caught my eye as I’m reading Conn Iggulden’s series Emperor on Julius Caesar and love the period atmosphere of the books.

Nevertheless, our time at the monastery was running out and we had to get on our way to the palace. Vigorously we walked, making it to Herrenchiemsee Palace just 10 minutes before the start of the tour. The grand lobby was almost empty apart from my parents and a handful of visitors. Where was everyone?

Annoyingly, I cannot share my photographs from the interior of Herrenchiemsee Palace because all Ludwig II’s palaces, photography is verboten inside. Mightily annoying! However the good news was that I was able to dig out some official photographs so you can get an idea of the architectural beast that’s this palace. 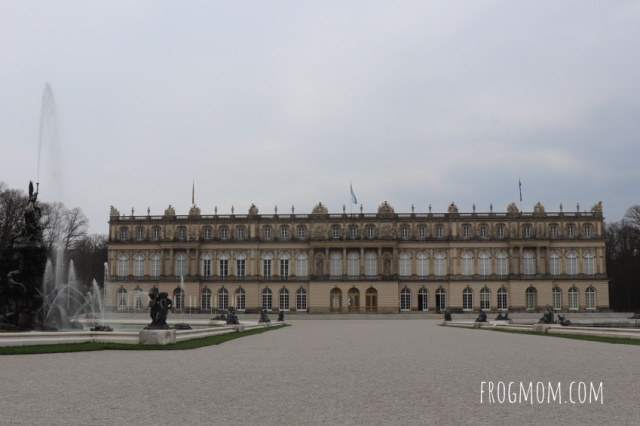 April is probably an off month for Herrenchiemsee Palace. While we had to elbow our way through crowded rooms at the other Ludwig II palaces, we’re hardly 20 for this tour. Relative solitude, at last!

Fortunately, Herrenchiemsee Palace is ginormous and fully accessible for mobility-impaired visitors. My mother got a royal treatment, being wheeled by my brother to an elevator behind the scenes right as we were discovering the grand staircase. 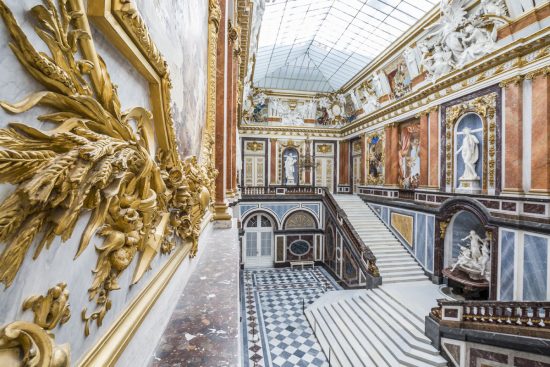 Over the top would be a way to describe it, but that was only the beginning. Herrenchiemsee Palace was designed to be a bigger and rather accurate reproduction of Versailles – though mostly the public rooms survive. Gilded friezes, porcelain decorations and marble everywhere. Already my 15-year-old, who isn’t a fan of museums, was warming up to the idea of ‘yet another castle.’ She does love interior design.

On the first floor, my mother met us on the landing and the guide led us to the spectacular second antechamber with dazzling chandeliers and wide oval windows above fireplaces. Sitting on benches listening to our guide, we took in the strange atmosphere of this castle. Ludwig II only spent 10 days at this castle and each of these 10 days was in fact a night. Ludwig II was a night person and during his stay, 40,000 candles were used to light up the rooms of the castle. 40,000 candles, let that sink in. The numbers were staggering.

From there, we entered the bedchamber which, all things considered, was a bit scary. Would you sleep here? 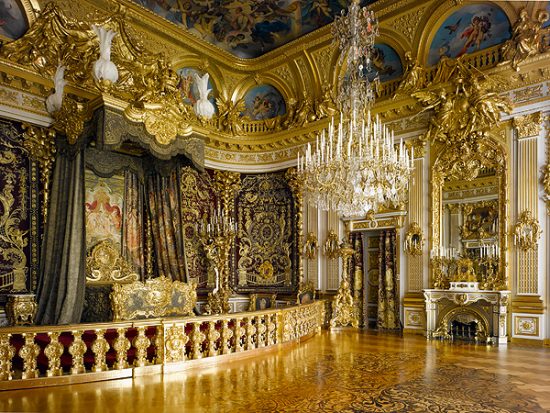 I would have hated to sleep by myself in this big bed in a bedroom with 10-foot high ceilings. It would have been extremely intimidating but then, Ludwig II was probably used to that.

The piece de resistance was undoubtedly the Great Hall of Mirrors. Measuring at 78m, it is 10m longer than the Versailles Grande Galerie des Glaces. 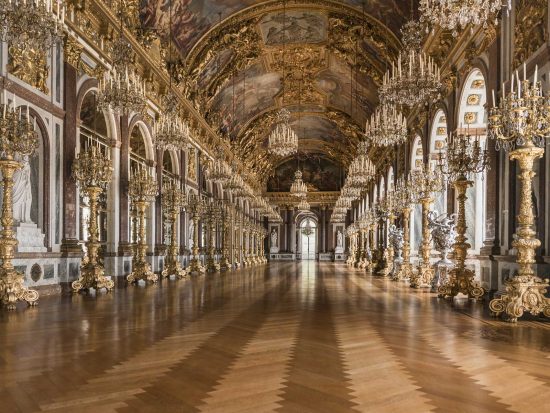 Now imagine the same room, at night. You are by yourself and the last servants left. It took them half an hour to light the 7,000 candles on 53 candelabras and 33 chandeliers around you. Enjoy.

This was Ludwig II’s life, this was what he did. He wandered lonely, wrapped up in his romantic dreams, in a palace that he never meant to live in, where he never meant other people to visit. What an odd, odd man.

However odd, he still needed to eat and since he was by himself, dined on this table. 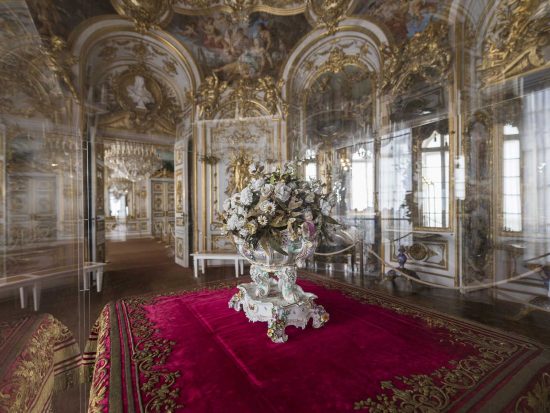 A similar table exists at Linderhof Castle. It doesn’t show here but the table rested on a removable trap floor that could be lowered with a mechanism a floor down (it took half an hour) to be fully dressed and garnished with dishes, then brought up by hand (another half hour) to the dining room. I suppose that Ludwig II didn’t mind cold meals or that the table included dish-warming devices.

There wasn’t much to keep us on that floor so we walked down a second staircase, this time completely unfinished. Bare walls, no sculptures, apparent bricks and that was it. The contrast with the grand staircase was striking and illustrated how much work had gone into decorating the rooms.

Last but not least – the bathroom! If I sound rather excited it’s because the bathroom was actually an swimming pool with a double staircase to walk down to the water. 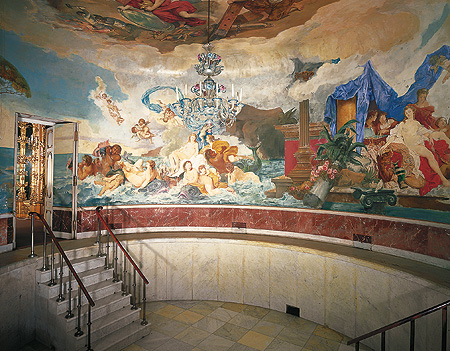 Do you want to guess how long it took to draw a full bath? From memory, it took about half a day or maybe 4 hours. In any case, it was long and there was probably a heating mechanism to prevent the water from cooling down.

This concluded our guided tour of Herrenchiemsee Palace, a wonderful visit by all standards.

To say that the gardens were not at their best would be an understatement. In early April, trees were still leafless and some of the plant beds were fenced in for replanting or other maintenance works. Where the gardens of Versailles dazzle by their sheer size and many hidden alcoves or waterworks, the gardens of Herrenchiemsee paled a bit in comparison but with a 900m axis from castle to water, they were still palatial gardens. From the top of a flight of stone stairs, we had a full view on the grand canal going out into Lake Chiemsee, a fact that I thought was pretty cool. 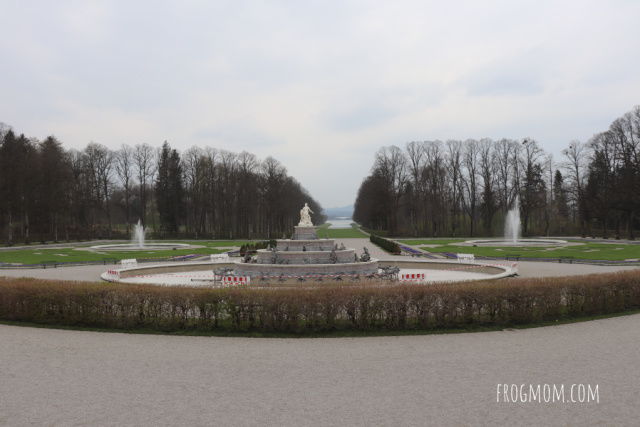 When the sun shone for a few minutes, we turned around towards the palace to enjoy the flower parterres planted around the two mythological fountains. 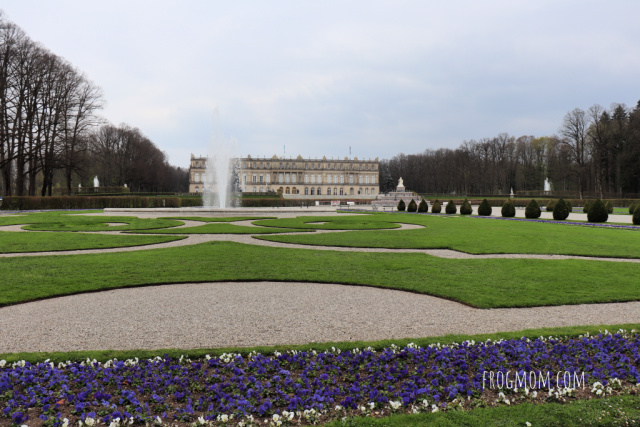 While we could only enjoy the design from the ground, this aerial view provides a much better idea of the global effect achieved and it is simply beautiful – even if unexpected on an island.

Around mid-afternoon, we decided to return to the ferry and get back to Prien as we still had an hour to drive to our next destination. In the boathouse, three ducks cozied up to us, probably hoping for some food like true scavengers. Unfortunately for them, we ignored them, saving them temporarily from liver disease which they probably get from chips or cake crumbs given by summer tourists anyway.

This concluded our trip to Herrenchiemsee, our favorite of all of Ludwig II’s palaces. He is often described as a dreamer and visiting this castle, picturing his nightly walks in a great hall of mirrors lit up by 7,000 candles certainly stuck in our minds like a dream.

How to Visit Herrenchiemsee Castle