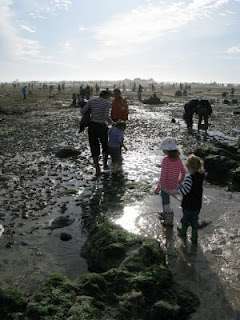 Half Moon Bay is generally not a popular winter destination, unless you are a surf 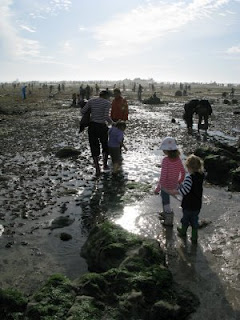 maniac and attend the world-reknowned Maverick’s Surf Contest at Pillar Point, a few miles up the road.

This February, the sea is calm to the lay observer. Last weekend, Half Moon Bay’s Pillar Point Harbor Lot C was literally under siege as hundreds of minivans, station wagons and other big cars converged to observe some of the biggest negative tides of the year.

When the moon lines up just right, millions of gallons of water flush out to sea and the reef becomes walkable. Only, this usually happens at night or during the week. But the negative tides during daytime AND on a gorgeous February Saturday? That was a gold mine.

The previous week, word had got around that anybody who was willing to walk a mile (from the parking lot) would be able to walk on reefs usually submerged by 5 to 15 feet of sea water. Pretty neat if you ask me. Come see above water what was under water an hour ago.

The kicker? A narrow time frame: the reef would start to be pedestrian-friendly around 1pm. Waters would retreat far away until 3pm and from then on, 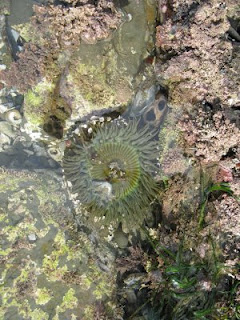 come back until after 5pm, all was back to normal.

When my friend Inga arrived around 1pm, the parking lot was empty. When we got there at 3pm with our friend Michelle, people were pushing crab cages to make space for their cars.

We followed the crowds and beyond the outer breakwater, finally got to the right spot: hundreds of people walking on reefs that stretched pretty far. Being a tide-pool enthusiast, I suggested we walk first as far as we could on the beach to get to the level of the farthest walkable reef.

This way, we’d be able to access the deepest tidepools before waters retreated, giving us a rare chance to see species that don’t live in the high or middle intertidal zones. In other words: finding California mussels is a piece of cake. It’s getting to the purple sea urchins that requires better conditions.

As we entered the reef, we encountered our first sea pals: white clams, limpets, turbans and of course, hermit crabs keeping the lowest possible profile.

Our three girls were overjoyed at their first aggregating pink-tipped green anemone, a somewhat lumpy and closed sample of this otherwise elegant free-flowing tentacular creature.

When you know that these anemones can clone themselves to infinity asexually, you understand why large reefs seem to be entirely 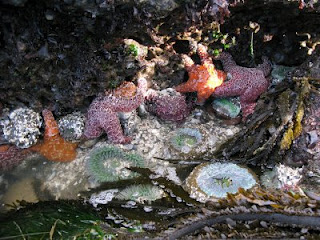 colonized by them. Further down were giant green anemones and our girls took turns touching them, each time emetting a distinct “Squishy!” or “eeeuw!” sound.

As we walked farther and farther, the rock became slippery and the ocean closer. I was obsessed with starfishes. I wanted to find at least one.

We found not one but a wall of them! Clustered next to or on one another, starfish ranging from orange to purple clung to vertical sides of rocks.

As we turned around, we saw fields of mussels around us. And bending more closely on water tanks, we realized the round holes in the reef actually hosted colonies of purple sea urchins neatly tucked in. Hurray for tide-pooling!

At that moment, waves crashed next to us and we looked at our watch. Time to get 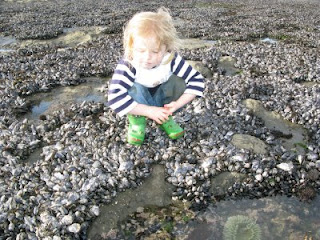 As we walked back, we remembered a chalk board on the wall of the Harbormaster’s building. On one side it mentioned names of boats. On the other, the catch of the day. Suddenly, we wanted to bring crabs back home. [Vegetarians friends, stop reading here. Offensive material ahead]

Yes, anybody can go and buy fish fresh off the boat at Pillar Point Harbor.

At the harbor, we ran to the first dock and check on the chalkboard which boat has live crabs. Too late, they already packed up. Two docks later, we find the real deal.

A real boat with a real fisherman on it (who looks like he’s been out fishing) and the guy pulls a crab cage from under water and gets four live rock crabs out for us. Check this out, San Francisco’s Fisherman Wharf. Crabs that don’t arrive directly in coolers!

Twenty bucks later (yes, $4/lb and a crab per pound roughly), we 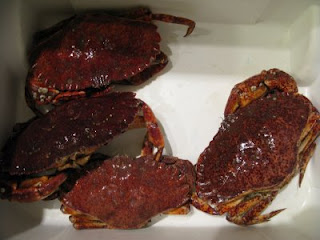 were carrying four crabs in a big plastic pouch.

I’m not a big fan of the plunging-crab-in-boiling-water part so I delegated that to my obliging husband. Our two girls looked on, fascinated by the whole process. As the first crab’s claws disappeared under furious steamy bubbles, our oldest promptly asked: “Is this one for me?”

Not an ounce of sympathy for the departed. I’m telling ya. If she turns out to be a vegetarian later, I’ll remind her of her youthful crab enthusiasm.