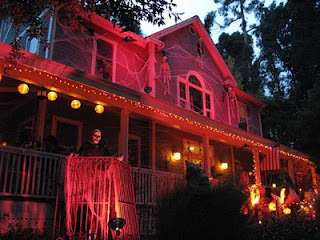 Craving a creepy tour at Disney’s Haunted Mansion but not in Anaheim for Halloween? Not to worry, the Ray Park neighborhood in Burlingame can provide much needed spooky relief when it’s pumpkin time around the country. Yes, trick-or-treating is serious business in Burlingame.

After a year in the Castro, another two years fighting crowds at Belvedere Street in San Francisco, we needed a change of scenery. As much as we enjoyed creative displays on the Victorian-lined Belvedere street, it was really busy.

Luckily, I have a friend who lives on Cabrillo Avenue right off The Avenue in Burlingame. Last year she invited 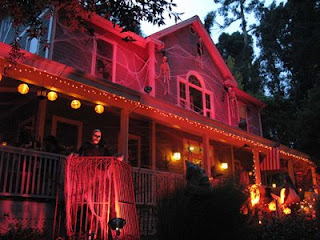 us to come trick-or-treating with her. We loved it so much, we were back this year.

The scene? Wide tree-lined streets, big suburban homes (but not McMansions), green front lawns, lots of people having grown up on the block, some streets closed off to car trafic for safer trick-or-treating and a warm evening that makes you want to move in right away.

An hour or so before twilight, around 4.30pm, little trick-or-treaters start knocking on doors with their parents in 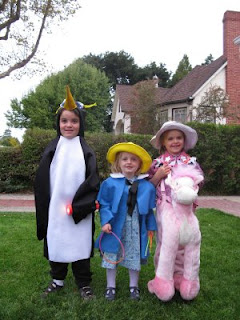 tow. Fairy flowers and plush animals were the first ones to come to my friend’s door.

Our children were watching “It’s the Great Pumpkin, Charlie Brown” when the trick-or-treaters knocked. They jumped off the couch, opened the door and started giving away handfuls of candy. “Trick or treat!” we heard, followed by “Happy Halloween!”

“Hold on guys, otherwise grandma won’t have any left for the evening,” my friend reminded them. The parents returned most of the treats. Soon it would be our turn to knock on doors.

My friend’s son was dressed as Cody the Penguin (from the movie Surf’s Up) and my girls were Madeline and a pink cowgirl riding her horse. All three had been awaiting this for weeks, changing ideas about their outfits, attending school parades and punpkin carving parties. Halloween was THE night to go out and have fun. Carefully at home we had packed a wicker basket and a flashlight each.

Just after 5pm, we finally went out, walking along Cabrillo towards 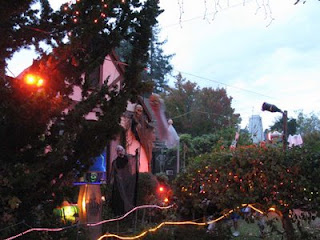 Adeline. Jumping in anticipation, the children rushed to the neighbor’s door.

My friend was carrying a hot pizza and a bottle of wine in her hands. “What for?” I asked. “There’s a block party around the corner,” she said. Indeed, several adults holding plastic cups filled with wine walked past us. We were on the right track!

After a lovely house with scary sounds, giant clear plastic bubble with purple castle inside and coffin with its vampire, we got to the corner of Adeline and Cabrillo. The crossing was busy. Lots of princesses, Dorothys, Star Wars storm troopers, Draculas and witches were hustling up 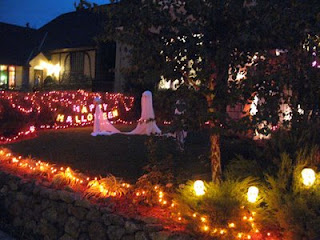 and down the street.

Towards Ray Park, the house featured howling ghouls sliding on ropes, upside down TV screens showing scary movies, a giant hologram in the window and a nice collection of coffins and monsters in the yard.

Across the street was a front lawn planted with lit ghosts and half skeletons seemingly crawling out of the ground. Not as scary as the howling ghouls, but the lights were very festive in the night.

We made a left to go down Adeline and a right towards Ray Park on Cortez. A few doors down is one of the nicest houses I’ve ever seen.

With a huge wrap-around porch, the house is so popular that there are signs indicating the “trick-or-treating” 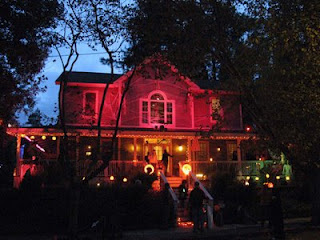 way. To the right!

Walk around the porch and you’ll discover scary monsters eating brain around a table, or giant spiders waiting by. The back yard has jumping hairy spiders and tombstones in the best graveyard tradition. If I remember well, there’s even a ghost up in the tree. Keep walking and you might hit dozens of smaller spiders hanging from nylon threads.

The real reward comes at the end with a cheerful bunch offering you a drink. Yay! These guys are great.

We had seen the highlight of the evening. Nonetheless, trick-or-treating was not over and we went up Adeline towards Drake Avenue. A short glance convinced me that the houses along Ray Park were really the nicest houses in the neighborhood.

Wherever we saw some lights 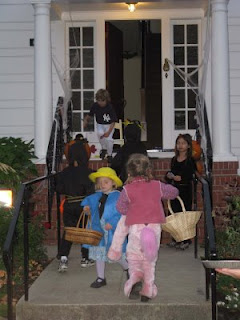 up by the door, our children ran to knock on the door, taking turns at knocking (more or less).

We heard “Here you go! Here you go! Oh, a little Madeline. You’re so cute! Take two!” Without fail, the little Madeline came back with more candy than her eldders and lugged behind a basket that was so heavy that it was leaking a trail of candy behind her. The two older ones noticed and picked up some on the way.

Our last stop was at the corner of The Avenue and Bernal, the house with the alien on the front porch.

At 7pm, our children had collected enough candy to last through Easter. On the way back home, we crossed paths with the second round of trick-or-treaters, teenagers who are too cool for Halloween but can’t help knocking on doors dressed as Hannah Montana cameos or sporting oversize jeans. Ray Park, we’ll be back!