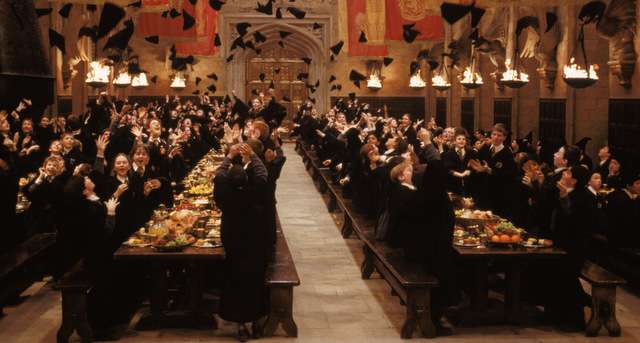 Wingardium Leviosa! If every child dream of flying like Peter Pan, every movie buff dream of sneaking behind the scenes of their favorite movie. Harry Potter fans probably dream about both – flying on a broomstick and discovering how Daniel Radcliffe did it all in the studios. At the Harry Potter Studio Tour, a.k.a. The Warner Bros. Studio Tour – The Making of Harry Potter in London, you can do both.

You can fly a broomstick quidditch-style in a crowded London street and you get to see how it’s done on a green screen. Thanks to Harry Potter (HP) geeks roaming the back lots, you can also learn funky details such as which London pub inspired The Leaky Cauldron in Diagon Alley. We took our 10-year old (for her birthday) and her 8-year old sister on a Sunday and it went … like a charm. What else?

How to get to the Warner Bros Harry Potter Studio Tour

The Warner Bros Studios are located in Leavesden, 20 miles north-west of London. Since we didn’t have a car, we bought a bus ticket from London with Golden Tours. Had I been more comfortable with the UK train system, I would bought super cheap advance tickets from London Euston to Watford Junction by train and then, taken a shuttle bus (20 minutes) to the studios. That would have saved us a lot of money and given the kids an opportunity to hop on a real train before seeing the Hogwarts Express.

Anyhow, we chose the bus from central London for convenience reasons and on the Sunday morning we picked, my girls were desperately not in the mood to go out. “We want to stay home!”  they said. Say again? I’d purchased these tickets three months before with special care, making sure we’d be free exactly on that day and at that time. I’d even selected the extra souvenir guidebook for my 10-year old. Clearly, there was no way we were sitting this one out. Everybody put their shoes on. Right now.

Wait for your Tour Time

Half an hour later, we reached the parking lot. “Maman, the Harry Potter bus!” There it was, the double-decker bus completely plastered with images of the movies. Instantly, my girls perked up. “Do you think they watch movies on the bus?” they wondered. Seeing as the bus ride is much less than an hour, I would hope not. Imagine getting off your seat in the middle of a spell? Cruel.

Intrigued by the idea of a Harry Potter studio tour, my 8-year old went on. “Maman, will the actors be there to greet us?” she asked, and in they case they might, she took out her hair brush to look her best. She added, “Well, they must be busy. Perhaps they’ll only be there at the end of the tour to say goodbye, then.” At least one of my girls was now in the mood for magic. 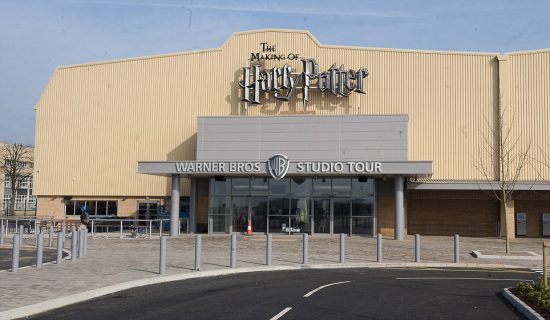 As for my 10-year old, she was getting antsy. The tickets strongly suggested that we arrive 20 minutes early and we outdid ourselves, showing up 40 minutes early. (Many other people had the same early bird urge.) As soon as the doors of the entrance hall opened on cue, 20 minutes before the first tour, we rushed in to get away from the fish tank entrance and from the wind nipping at our legs outside. After a pit stop, we hit the shop (more on that later) to see what treasures were in store.

Get to Open the Doors of Hogwart’s Great Hall

When our tour time came up, we joined the line to get in, passing by the first movie set of the tour – Harry’s cupboard bedroom under the stairs. Fun. The next room was rather unexpected. Instead of being moved along a cordoned line on the sets, we were ushered into a plush movie theater. As you can guess, my girls loved it. “We’re going to watch the movies?” they asked. Right, all back-to-back Harry Potter movies sounded great. After a 10-minute clip with snippets of all movies, Daniel Radcliffe, Rupert Grint and Emma Watson appeared on screen. Standing in front of massive gilded double doors, they invited us inside to tour the studios. The screen then went up and revealed the same gilded double doors shown on screen. Magic!

Lights back on, a tour guide asked if anybody was celebrating their birthday today. My shy 10-year old raised her hand and joined three other women by the great doors. Together, they pushed them open on the count of three. One. Two. Three.

We were now officially in the studio tour. On both sides of the room, the famously long wooden tables where young wizards sat down to await owl-mail. Way at the back, the assortment of hat-sorting ceremony professors including Hagrid the gentle half-giant, who we learn was played by Robbie Coltrane but whose body double was a famous British rugby player standing tall at  6’10”. In the room against the far right wall, the very first wizard costume Daniel Radcliffe ever wore in the movies as an 11-year-old. How cool was that? This wizard uniform got revering looks from most everybody. 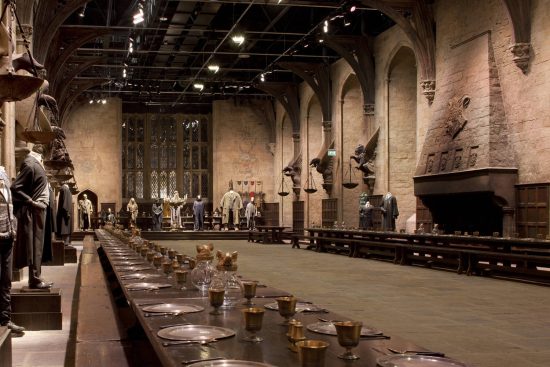 This is where I got confirmation that these were the real studios. Tell you the truth, I wasn’t entirely sure before the tour. Now, it’s quite  clear that the studios we visited are the actual studios where the Harry Potter crew showed up every morning to work on movie scenes or to stage fun stuff like remote-controlled monsters or set explosions. This was the real deal.

Past the shock and awe of Hogwart’s great hall, we were free to roam about and explore the sets for as long as we wanted. That was awesome because I (wrongly) thought we had a 2-hour time limit. Not so. We were free to do whatever we wished inside the studios for however long we wanted. Now, some people take that quite literally and stay inside for 11 consecutive hours – Harry Potter loonies – but most sane people stay between 2 and 4 hours. We stayed slightly over 3 hours and felt like we made the most of our visit.

I guess with children, there’s only so much time you can spend inside a cool warehouse before they get cabin fever. Most of the children I saw during our visit looked like they were school-age. Very few preschoolers. I guess it’s related to the fact that the movies’ protagonists are school children too and that most of their adventures take place in a rather unique school. In hindsight our girls were the perfect age. They didn’t get bored once and believe me, there was so much to see they could easily have gotten overwhelmed.

From architecturally-correct scaled models of buildings to techniques used in the make-up and animatronics shops, it’s a world of details broken up in bite-size visitor-friendly sections. In fact, it’s almost film school with a Harry Potter slant – sets, costumes, lighting, animal husbandry, hair and make up, special effects, animation, screenwriting, catering. What do we not see about the Harry Potter movies? Not much, the accounting department maybe? 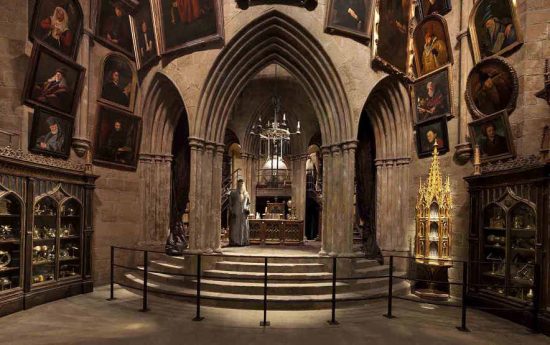 At my girls’ level, the sets were the most fascinating part of the tour. In Dumbledore’s office, my 10-year old spent 20 minutes looking for a golden snitch (the flying quidditch ball) while I discussed the cabinet of memories with a HP geek who told me that each memory’s label was written by hand in black ink.

My 8-year old smiled and posed in front of the Gryffindor common room which she found perfectly to her taste and where she wouldn’t mind studying later when she grows up. Both girls were fascinated by the spooky Potions Room, looking for cauldrons that lit up from the inside with colored smoke.

In the Weasleys’ kitchen, they took turns activating an iron on an ironing board, a knife chopping onions and a pan in the sink. Hagrid’s hut was a place to feel small and Diagonal Alley a place to ask your parents for sweets and owls. What a wonderful wizard world.

Play Quidditch or Fly over Hogwarts

Past the quidditch special effects display, we lined up – like most people – to do a green screen test either in the flying car or on a broomstick. Following instructions, we pretended to avoid bus collisions, fly over Hogwarts or dip our hand in the Thames river. Really cool! By the time we reached the Ministry of Magic we were getting hungry.

Since our visit, the studios have added a whole section recreating Platform 9 3/4 with the Hogwarts Express at quay and the possibility to climb aboard, check out luggage props or pretend-push a trolley that disappears through a wall. 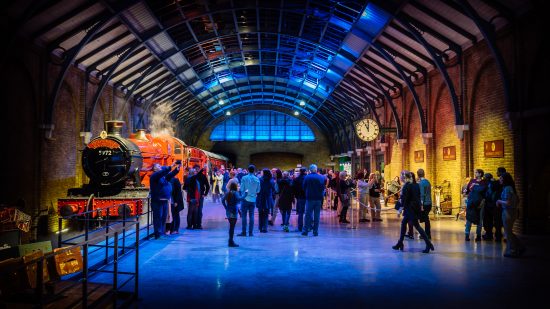 It sure beats the installation at Kings Cross train station, where you can line up with Harry Potter fans to pose with a trolley, although it’s always fun to do it if there’s no queue.

Fortunately right outside the doors, there was a small dining area. Unfortunately, the menu is very limited and the food quite bad. We even tried a cup of butterbeer – a soda with butterscotch-flavored cream on top – but neither my adventurous 10-year old nor I cared for it. We dumped it and I sipped a tea to get rid of the overly-sweet taste.

Behind the Scenes Shops

The second studio were definitely more technical and geared towards the geekiest of Harry Potter fans. They feature most of the behind-the-scenes departments, from make-up to fake monsters, animatronics, models, architecture or design. 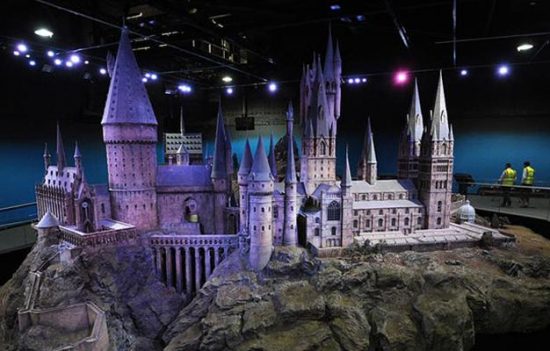 It ends on a bang when you enter the last room with a storey-high detailed model of Hogwarts complete with lights and trees. Over the holidays, it’s even decked out with real movie snow and Christmas trees. Wow.

Before getting out, we spent some time in the store where my girls took note of Hermione’s wand and the electronic Marauder’s Map for Santa Claus. I was fascinated by the chocolate wands and my husband was impressed by the quality of the sweaters and uniforms. The best part is, the shop feels like another set because it’s decorated with props from the movies. 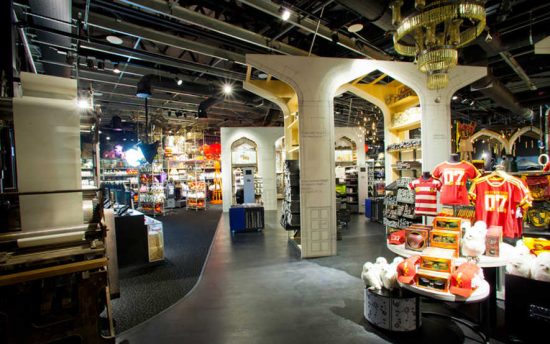 At the end of the day, we were amazed by the rich details, fine craftsmanship and excruciating amount of work behind the movie production. Honestly, who would’ve thought? We’re not even Harry Potter fans – no, we’re more modestly Harry Potter enthusiasts – but we enjoyed every minute of it.

It was a great family day out and my only regret is that it was a sunny day, as this would be a perfect rainy day activity. If you have more time around London, you can visit the real Whomping Willow in an ancient forest.