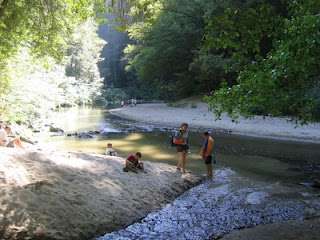 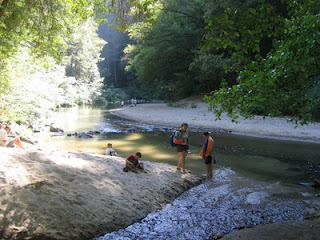 A river flowing through it? Sandy beaches? Less than 2 hours drive? Fog on the coast, sun in the redwoods? Steam train? It does sound like a pretty good deal.

Henry Cowell Redwoods State Park is a hidden gem. Barely 10 miles from the Santa Cruz beach boardwalk (where the movie The Lost Boys was filmed), there it is, nested between two big thoroughfares, and the cities of Felton and Ben Lomond. Despite the commercial and residential surroundings, the park is surprisingly quiet inside.

My guess is that people don’t even notice it’s there. Most “out-of-towners” who take the trip to Felton are headed to the Roaring Camp Railroad with its steam trains, beach trains, country singers by the barbecue and Old West general store.

Ironically, the parking lot of Henry Cowell Redwoods’ Nature Store connects with Roaring Camp but the flow is mostly one way. So it’s no wonder we came across an old man after our train ride who admitted “I’ve been coming to the trains for many years. Now I’d like to see the park.” And he crossed the tracks against the flow of people trickling in. Good for him.

Henry Cowell Redwoods SP is a nice redwood grove with a river trail going up and down along the creek. We were lucky to get it by late spring with water flowing and three feet deep in places. A ranger tol 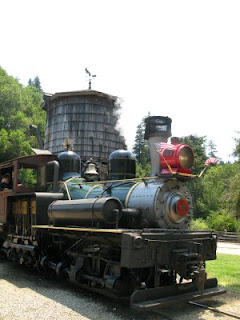 d us that by late summer, you wouldn’t want your kids to play in there. It dries out.

While we didn’t have the time to hike deep into the forest, we splashed and pretended to fish in the creek, an activity that kept our youngsters occupied.

As far the train ride, it’s lots of fun but longish for the young’uns. We went for the steam train ride that leads up to the top of Bear Mountain and the whole ride probably lasted one and a half hour. Both our girls fell asleep on the way down, despite the deafening steam whistle and clanking noise of the wagon.

What I’d love to do though, is come back for special events like the train robberies, harvest fairs, ghost trains and moonlight dinner trains, all complete with actors in costumes and special decorations.

Now that would be a good reason to return for a camping weekend and explore the redwood groves as they deserve it. As we drove back home, we stopped at a wonderful restaurant in Half Moon Bay for dinner. Despite one of the tackiest names and restaurant fronts, Pasta Moon is really quite good and it passed the preschooler test. Both our girls cleaned their plate of butternut squash ravioli with sage butter before we got our mains. We’ll be back.