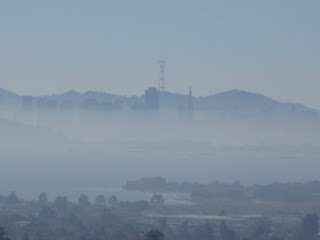 > Hike in the Thousand Oaks Neighborhood in Berkeley

Hike in the Thousand Oaks Neighborhood in Berkeley

You’d think we were house-hunting and yet we weren’t. We were just visiting the new neighborhood of our friends Christine and Martin.They moved next to Solano Avenue in Berkeley last December, the up-and-coming neighborhood recently reviewed by Lisa Trottier for Sunset Magazine. When the East Coast suffers below zero (Farenheit) temperatures, we enjoy sunny days at 60s and above. I guess that’s the reason for California’s reputation.

So on that sunny Sunday we crossed the dreaded Bay Bridge and parked right outside of Christine and Martin’s home. “Girls you’ve got two choices,” we told our daughters after conferring with our friends. “We can hike to dome rocks and go to a playground or go on a miniature train and hike in the mountains.” By 2/0, they voted for option one. We’ll see Tilden Park another time.

So off we went through sinuous streets leading up to Indian Rock.

The Thousand Oaks neighborhood has been described by Red Oak Realtors as an idyllic Berkeley suburb in an inpiring nature setting. Their website writes that “early on, Craftsman bungalows and shingled lodges were sprinkled throughout the community. Later, between 1910 and 1940, Thousand Oaks saw period revivals in Spanish, Tudor, and French Provincial styles. These magnificent homes still remain and are now surrounded by mature oak trees and lush, landscaped walking paths, babbling brooks, and bucolic parks.”

Actually, none of that is a lie. We did walk past babbling brooks, bent under tree branches on walking paths and admired stately homes on the hills wishing that the East Bay weren’t quite so far from the Silicon Valley.

Surprisingly, it did not take us very long at all to reach Indian Rock, the biggest of several volcanic rock outcrops peppering the Berkeley hills. It is known to Bay Area climbers as having a short selection of bouldering problems. As we got to the top, the view on San Francisco downtown was amazingly … smoggy. I wish I could say it was crystal clear and we could wave to our friends from that rock, but no. Here is the proof (see smoggy photo).

Indeed, I’ve noticed in the past few days that the coast has been fairly clear whereas San Francisco downtown has been fogged in at least in the mornings. Strange. I guess that’s what you get for the weird local micro-climate.

On that rock, my girls realized they had a hungry stomach and wolfed down a half-quart of sugar snap peas as a pre-lunch snack. Christine told us that Martin and her sometimes bring their coffee to Indian Rock and just sit there, sipping their morning joe, admiring the view on the bay. I can’t blame them, it’s really peaceful.

Before our junior members got tired, we got up and marched further up the hill towards Codornices Park and Playground, the perfect birthday party playground.

Just set your tables under the trees and unleash the kids. The enclosed toddler area features a little train, swing sets and slides, whereas the area for bigger kids features climbing structures, a mulch ground and a big concrete slide just like the ones in Golden Gate Park (with cardboard bits to protect your bum from burning).

If you go through the tunnel (don’t forget to howl or sing at full lung capacity), you access Berkeley’s Rose Garden, a 1930s botanical garden including a terraced amphitheater and a long redwood pergola typical of the East bay’s craftstman architecture. Of course in the dead of winter, there isn’t much in terms of roses. However come back in May or June and the place must be a sensory paradise.

We returned through back alleys and landed at Solano Avenue, a very lively commercial area with a great bakery (Christine, the name please?), restaurants, tons of cafes, bookstores, toy stores and even a Xocolate Bar (understand, a gourmet chocolate store) in front of which my husband rushed me, concerned I might step in and never return. Sigh.

Now we do have to come back. It’s for the good of small businesses, I swear!

One thought on “Hike in the Thousand Oaks Neighborhood in Berkeley”