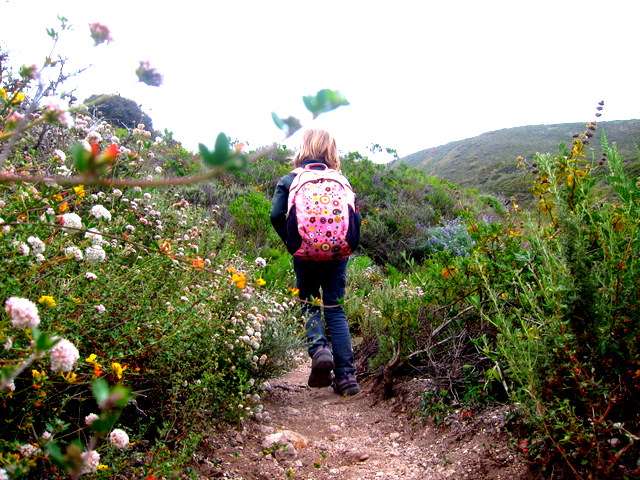 South of Morro bay, Montana de Oro State Park is a gem of a state park that runs along 6 miles of rugged coast and thick chaparral. The name Montana de Oro – or Mountain of Gold – comes from the bright blooms that cover the hills in the spring. Even hiking as late as Memorial Day weekend, our hike was a wildflower wonderland and I was glad I picked a long loop including a creek canyon, river crossings, a windy peak and ocean views. Rarely have I seen such habitats variety in so short a time. Rarely too have I seen kids stepping in wasp nests burrowed in the ground and savagely attacked by crazy stingers. Ouch! Though the burrowing wasp attack was a nasty surprise along the way, all the kids – ages 6 through 8 – completed the 7 miles like troopers and well earned their next-day ice cream in Morro Bay.

Before I start this adventure, I’d like to point out how confused we’ve been with some of the signage at Montana de Oro. Where do you see a wooden post with three arrows pointing to three different directions, all saying “Trail”? How is that supposed to help? Of course it’s a trail, I want to know which one. Man, we retraced our steps more than a few times to find our bearings at the beginning but once we were firmly launched on Rattlesnake Flats Trail, all the other trail junctions were quite obvious. To whoever made these wooden posts with three arrows all saying trail – I do not think it’s funny. Now on to the perilous and arduous adventure.

We started our hike at 10.30am after parking at the southernmost parking lot on the coast. We all had our lunch bags, our shoes, our backpacks, and even the foggy weather couldn’t dampen our spirits. We were excited to discover this area and fortunately a ranger had given me several trail maps at the campground in the morning. With the kids running in front, we found the wide gated entrance for Rattlesnake Flats Trail and just a few yards later, made a right on a narrower trail. That’s where we passed the 3-arrow sign post and stared in disbelief. All right, we continued straight and cut through a low chaparral where sky lupine, orange sticky monkey flower, purple clovers and yellow buttercups literally illuminated the path with their shapes and flowers.

About 0.5 mile in, we walked by a sandstone cave that looked like a wind cave, overlooking the trail and the canyon. My 6-year old pulled my sleeve and said, “Mom, remind me to climb in the cave on the way back.” I would have loved to but we were hiking a loop so I promised her another cave elsewhere. During most of Rattlesnake Flats Trail, our path followed a ridgeline above the creek and provided gorgeous views of the hills where darker creases made the landscape look like it belonged in a model train set.

After a dozen sharp zigzags downwards, Rattlesnake Flats Trail met with Coon Creek Trail where I offered an option to return for those of us who didn’t want to do the whole loop. Past that junction, we were not turning back. Two parents decided to bring back their 5-year old to the camp as he had  happily tagged along until then but was showing signs that nap time would be welcome. We took the boy’s older sister with us, her bag lunch, snacks and water, and went on our way. Lazily following the creek and framed by tall arroyo willow trees, Coon Creek Trail was as green as could be and we crossed several wooden bridges along the way. On both sides of the trail, crazy thimbleberry bushes and poison hemlock plants grew much taller than us.

A half mile in the trail, we stopped for a snack break under a majestic oak tree whose low branches offering the ideal jungle gym for little legs. A child tree! If we had not started walking again, the kids would still probably be in the tree, lying down on their stomachs, sitting on their butts or climbing with their hands.

At that point the group stretched out and I brought up the rear with my friend Ashley who pointed to ripe wild strawberries under leaf cover. Knowing what a berry-nut my 6-year old is I gave her one and she loved it and asked for more. Intrigued, I tried one too and the sour taste reminded me of the wood strawberries of my childhood. Yum, trail snack! Shortly after, we started our ascent for Oats Peak.

To reach the peak from the creek, we were looking at 1 challenging mile with 1,000 feet of elevation gain. Some of the kids were already showing signs of fatigue but the promise of lunch at the top got them motivated. In the end, what really made us reach the peak in record time was the unfortunate burrowing wasp incident. Did you know that some wasps live in the ground? I didn’t. They come out from small holes in the ground (just like snakes) and if they step on them, all hell breaks loose. That’s what happened to us.

The little boy’s sister who we had “borrowed” for the hike stepped on a nest. She was in front of me when she started wailing. I looked at her and did not understand until I saw a wasp on her leg. I shooed off the wasp who, probably even more upset, stung a boy’s neck right behind me. By the time I shooed that one away, two kids were crying their lungs out and more wasps were coming our way. “Run!” I yelled to the rest of the group who, fortunately were in front of us. They too did not understand until they saw more wasps zapping around us and a third person – my friend Ashley – got stung in the forearm. By coincidence I had children’s tylenol tablets in my bag and started distributing them like candy. This was not the end of the wasps though.

We realized minutes later that a wasp had clung to the girl’s inside shirt as she suffered two more stings to the torso and back. The boy too got a second sting in the neck. Poor things. I picked the girl up and carried her as far as I could out of tree cover where the wind would probably keep the wasps away. Once at a “safe” spot, Ashley rubbed arnica cream on the swollen bites and we tried our best to comfort the two unfortunate kids. The only way I was able to stop the little girl’s sobbing was by telling her a silly princess story. I told it as slowly as I could so the tylenol would start acting. Finally it did and the sobbing completely stopped.

The other kids were way ahead of us, both scared and excited that something so dramatic had happened. We were now almost at the ridge and the fog gave an eerie atmosphere to the treeless mountain slopes. The wind picked up and the temperature dropped pretty quickly too. Thirty minutes later we found a spot vaguely sheltered from the wind but with the cool temps, we didn’t linger and lunch was a quick affair. The top of the mountain was barely 20 feet ahead, rising at 1373 feet and complete with a US Geological Survey metal marker. The little girl who had gotten stung so badly celebrated her efforts by balancing on the marker.

From the top of the peak, the trail followed a beautiful ridgeline along the back side of Valencia Peak and we didn’t meet a single soul on that stretch. Just us, the wild grasses and spiky thistles. Going down was a lot easier than going up, the fog burned off slowly and by the time we reached the Spooner Cove Visitor Center, the sun was shining bright and the sky was blue. We separated the group and let one group take the kids back to the campsite while four of us hiked back to the trailhead to pick up the cars. If you do that, count another 2 miles. We didn’t bother going on trails and simply followed the paved road.

And that’s how we hiked Oats Peak with kids and had many more adventures that we would have wished. It was a long hike for the kids but I suspect they could have done more. You know how I know? When we got the cars back and brought them to the beach, they  still had enough energy to run in the waves like mad young puppies showing no signs that they’d be up in their feet since morning.

Kids will always surprise me.