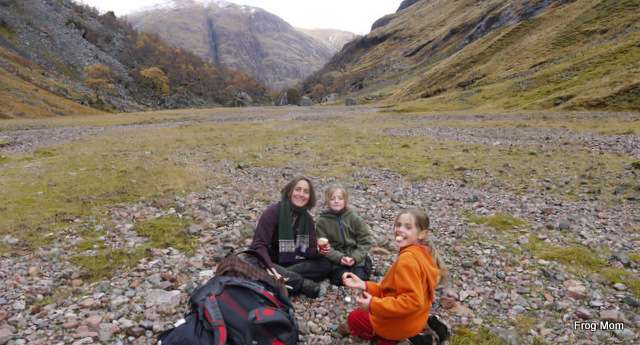 Coire Gabhail is the hidden valley where the clan of the MacDonalds of Glen Coe hid their rustled cattle and it’s one of the most beautiful short hikes I’ve ever done. Perched in the folds of a Scottish mountain, this hidden valley is where we hiked with my girls and my husband on steep, watery and rugged terrain to reach a glacial valley surrounded by snowy peaks. Now this is what I came to Scotland for – wilderness with a scent of history and moody weather. Despite freezing temperatures and a hike jazzed up by snow and rain, our family had a blast enjoying this valley all to ourselves – or almost. Up on the slopes, blended with the autumn hues of browning grass and volcanic rock, a herd of red deer was observing us. We felt very grateful that a double coincidence led us to this pristine area.

Indeed without expert advice from two Scottish walkers we met the previous day, we would have passed right by this hike. The night before, we celebrated a pagan Celtic Halloween at the Scottish Crannog Centre in Aberfeldy. When the owner of the Coshieville House Bed & Breakfast showed us to our room, he asked about what we were up to the next day. I mentioned the Glen Coe area – having seen Skyfall, I’d found out that the gorgeous Scottish landscape in the movie came from Glen Etive, a mountain next to Glen Coe. Since Glen Coe was the poster child of dramatic Scottish mountains for tourists in guidebooks, there was surely a hike for us in there.

“Check out Hidden Valley,” he suggested, “it’s very atmospheric. I’ll show you on the map in the morning.” Atmospheric? That alone made me drool. Later that night, we came back from our Halloween gig and found three guests in front of the lounge’s fireplace. They couldn’t have been more suited to talk about the area: Johanna Campbell – a Scotland tourism PR, Gilbert Summers – a Scotland expert for Must See Scotland, and Meg Pier – a Boston travel writer for View from the Pier. They started asking about what we’d seen and our plans and Gilbert said we should absolutely hike up to Hidden Valley. He gave us some historical insight, details on the walk. Atmospheric, it was going to be that and more, fun for the girls and not too difficult.

The next morning, we left Coshieville House with a copy of the topo map for our hike and the weather forecast: good until 2pm, stormy after that. At least we knew when we had to leave the mountain but that part of our fell slightly apart because of an unexpected and irresistible urge to take pictures every other mile of the road between Aberfeldy and the trailhead. It was like “Look, misty mountains!” followed by “Drive back, there’s a red squirrel sign,” or “Stop here! Fog on the swamps” followed by “Snow, snow!”

Finally at 11am, we pulled in the parking lot. So much for our plans to be off the mountain at 2pm, we’d never make it before the rain hit us. Rain or snow, the mercury was near freezing point. Accordingly, we geared up with our rain pants and rain boots, snow gloves and filled the backpack with a picnic bought along the way. Bus-loads of tourists were snapping happily away around us while we readied ourselves in front of our chaotic car trunk. Off we went! Uh oh, not so fast. A sign near the start indicated that the bridge to Hidden Valley was closed. Closed! There was a river to cross before the valley, you see. The good news was, another bridge crossed the river a few hundred yards below. The iffy news was, we had no idea what to expect and whether the trail was accessible at all. I looked at the two other mountains facing us, scanning for hiking alternatives. Both were heavily snowed in at the top and their trails seemed more brutal than Hidden Valley’s.

Hoping for a pleasant surprise, we set off for the next bridge over and retraced our steps to where Glen Coe’s bridge was closed. Have you ever heard the term “boggy”, do you know what it refers to? This was our introduction to boggy terrain and boy was it boggy – the thick mud sucked the boots right out of our feet and what wasn’t boggy was waterlogged. We were so relieved we’d chosen rain boots for our girls! They’d be begging us to run back to the car with wet feet if we had picked hiking boots. After a tricky boggy half-hour, we stumbled upon a proper trail by the river. No more slippery boggy deer trails! This one was made out of stones and rocks and felt good under our feet.

We began our ascent and entered a gorge where the River Coe’s white waters rushed down below. Two feet wide in parts, the trail rose and the gorge got narrower, overlooking the river several dozen feet below. With younger children I might have hesitated. With mine, I just held their hands and hoped the rocks weren’t slippery. This was the first of two sticky parts of the trail, the second one being a river-fording that’s hard to see. It’s so hard that we missed it and started scrambling up a steep gravel slope that really made us feel like we were making no progress. Would this ever end? Confused, I took the map out of my pocket and looked at the other side of the river – the trail! I rallied the troops, we went down the gravel and searched for the best spot to ford the river. Once on the other side, it was impossible to get lost. Though there a few occasional cairns, the path was well marked.

When we thought we were about to reach the top of our trail, the mountain dropped and a wide green valley opened in front of us. Though we’d been warned it would be breathtaking, we froze in awe. Now it made sense that you could hide cattle up here but how on earth did they get the cattle there? That question redefined what we’d just hiked. Tough cookies these highlanders. Giddily we skipped our way down to the valley floor and looked for a perfect lunch spot. Given the dampness around us and the menacing skies, it had to be dry-ish. A large patch of rocks did the trick and we all sat down when my 9-year old yelled “Deer! Deer!” and pointed behind us. Deer what?

We turned around and blinked a couple times before identifying a group of boulders as a herd of red deer – a magnificent male with big antlers and 5 or 6 females. Across the valley, another dozen deer grazing in the distance. What a sight. The picnic could be crap for all I knew but we completely scored on the scenery and wildlife. Surprisingly, the picnic wasn’t that bad either. A slab of mature cheddar, bite-size pieces of roasted turkey, sandwich breads, butter and ham. I had even had the foresight of purchasing an old-fashioned 3-in-1 tool that combined fork, knife and spoon. Let the spreading begin! Munching on our sandwiches, we watched the sky darken, the back of the valley become whiter, the white become softer, the air become damper. Rain. Not torrential rain, but wet rain all right.

We packed up our lunch and told the girls there was one last thing we wanted to do before going back to the car – get to the back of the valley where snow lay on the ground. That didn’t go so well with our 9-year old who was now tired and cold. She had no interest whatsoever in the snow, just in the warm car. Much cajoling was done, a few candies were handed out, on the trail we got again. Way in the back, the trail picked up and now followed the sides of the mountain rising above an ever-growing crevasse, the type of crevasse that tells you a glacier’s been there. Since there was no hope of us going over the ridge and down the other side of the next mountain, we sat down for a cup of tea and huddled together, watched the rain turn to snow. It was magical and we were not cold. Big fat snowflakes fell all around us, staying fluffy on our jackets before melting in the fabric. We tried to catch them on our gloves, with our tongues, on our shoulders – it was now officially our first snow day of the winter season.

All good things have an end and we decided to head back. As is always the case, going down the mountain took half the time of the ascent but the going down included an extra twist – it’s easier to slip and fall going down than going up. To lighten up the mood of our girls who he knew would end up in the mud a few times (and possibly tear up), my husband launched a “splotch” contest – depending on mud coverage and excellence of the tumble, “splotches” would be awarded points, points tallied up and a prize awarded. Ah, with what joy and laughter our girls slipped down the rest of the boggy mountain!

This “splotching” sequence remains one of their favorite Scotland memories, as my 7-year old wrote in “what I did during my vacations” for school yesterday. Her account starts with four sentences explaining “splotching” and is illustrated by a photo. The dramatic scenery with a scent of history? That’s for me. Leave to the kids the rare joys of freely playing in mud.