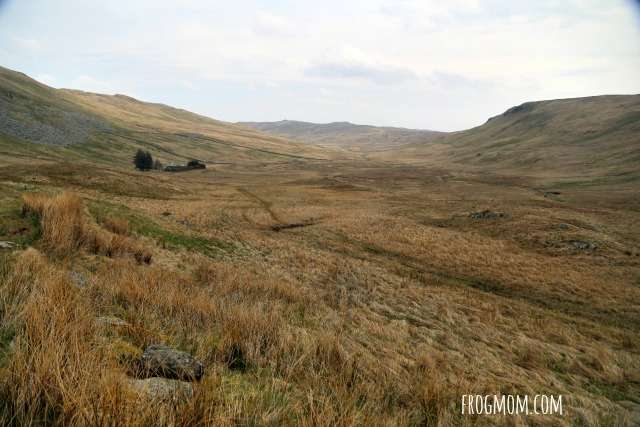 Arguably the Lake District’s forgotten valley, Longsleddale is a tough spot to reach and only locals know about this side of Kendal. Why would tourists come indeed? There isn’t a single foodie restaurant, quaint tea shop or famous gingerbread place here. No Beatrix Potter or Wordsworth museum either. Yet with its hairy single-track lane, its family sheep farms and its sleepy Victorian church, Longsleddale seems like a place forgotten in time. Sure, staying a weekend in the church was a great way to get local advice on exploring the hills and we were grateful for their walking wisdom. Hiking Longsleddale and its open moody landscapes with nary a soul in sight was well worth the trip.

With our girls, we packed our hiking boots in the morning and from St Mary’s church, drove 4 miles to the end of the only road at Sadgill Bridge. On the way, we stayed behind a small tractor mini-busing three people during a mile and as it turned onto a farm driveway, we realized that they were in fact herding three errant sheep back to their home. Now, that’s what I call good neighborhood relationships. 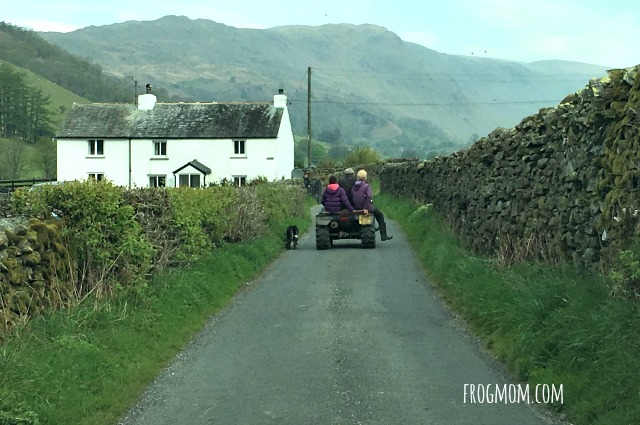 Once at Sadgill Bridge, we parked the car and laced up our hiking boots. Skies were hazy but ever optimistic, we hoped that dry weather would hold all day. The four of us set off on the rocky trail that continues the paved road. This was once a packhorse trail from Mardale to the market town of Kendal, as well as a route north to Galloway for drovers. Today, hikers and fell runners share the trail with dog walkers and horse riders.

Our plan was to head up the hill, head east towards Mosedale, walk north-east past Mosedale Cottage to Hawswater (a reservoir), follow Hawswater west and come back due south over the hill from Mardale Head back to Sadgill  Bridge. However, our fine plan didn’t survive past Mosedale Cottage as we literally lost the track and invented another route of our own. Blimey, I couldn’t believe how boggy and waterlogged the hill tops could be. 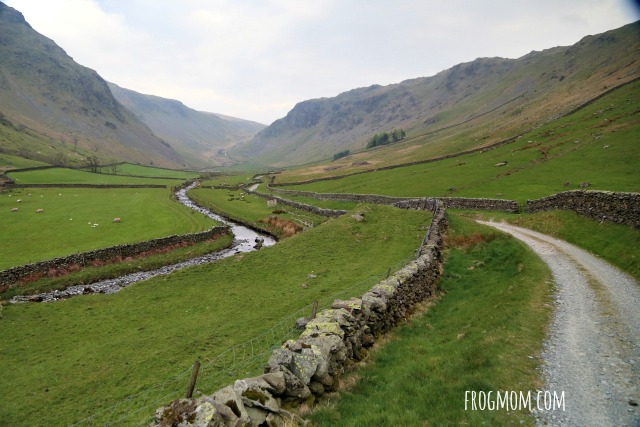 Our teenage girls set off in front of us, as they always do, walking at a good pace while talking about anything and everything and generally, forgetting about us. As along the rest of the valley, the road closely hugged the contour of the river Sprint, its grey outline accented by traditional stone walls doing their job of keeping sheep and enthusiastic lambs geographically contained. Cute alert: young lambs mostly jump around and chase each other like kids do. 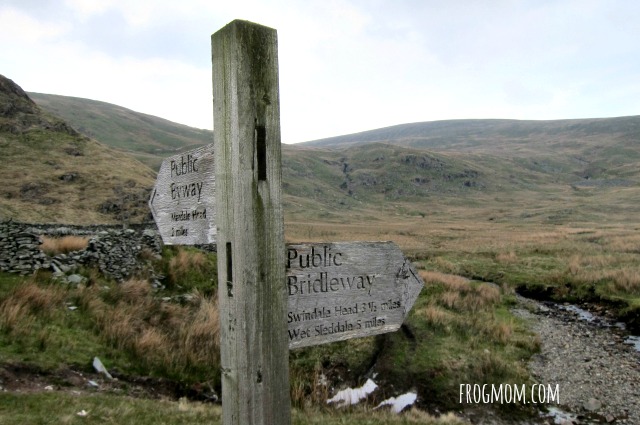 As we followed the river uphill, we stopped several times to look over the wall and daydream about swimming in the river’s clear water pools. It was a bit too early in the hike to think about reward so shelved the idea in our mind, pushed on and reached a flat stretch with a crossing sign.

Our girls had missed the sign and were already tackling the steep path to Gatescarth Pass. Together, we crossed a little stream at the place poetically known as Brownhowe Bottom (bottom…hehe!) on the map and left the steep contour of the valley for featureless moorland framed by round hills.

It was quite a change in scenery from the valley, as if we had turned the page of a book to a Scottish hanging valley in the Highlands. The moor seemed to stretch on forever and for much longer than I thought. As lunch time got nearer, I wondered when we would find the bothy because, well, I was getting hungry. When I spotted a dark green copse in the uniformly winter brown landscape, I knew we’d found it. It was too unnatural to be anything else. 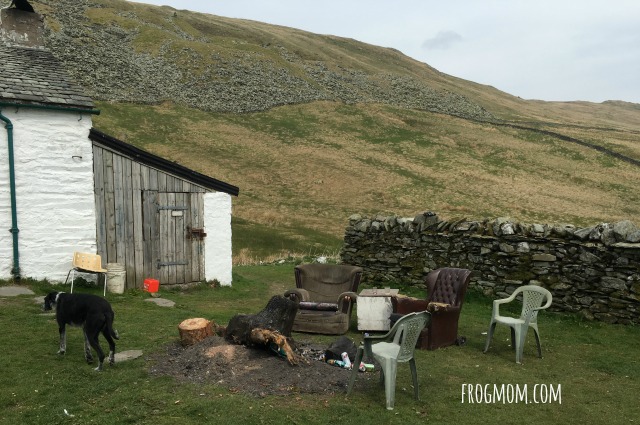 Getting closer, we discovered Mosedale Bothy, or Mosedale Cottage as it’s marked on the map. This building was a remote farm until the 1930s when the last occupant left. My friend, that person had fortitude aplenty. The place doesn’t exactly spell “crowds” and “company.” On the day we stopped for lunch, three men (MBA volunteers?) were repairing the back of the building and we said hello before retreating to the inside of the bothy for lunch.

The bothy, one of only three in the Lake District (and certainly the most remote), included 3 rooms (two small stone rooms, a larger one with an elevated wooden platform) and a communal room with a small stove, two tables, a handful of chairs and two old couches on the verge of sprouting mushrooms through the seams. 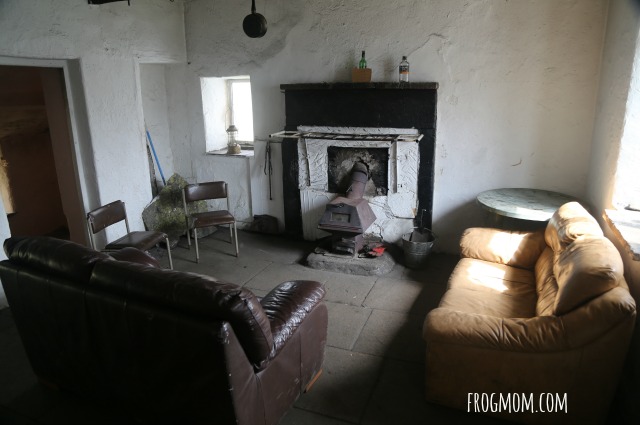 It was both oddly cozy and white-trashy, what with the mismatched decaying furniture and empty booze bottles lining mantels and windowsills. I do so wish that people packed out their trash and took better care of bothys. It’s a shame because the bothy is big and must see quite a bit of foot traffic (as the bothy journal suggested). One of the old guys told me that the bothy had seen 23 people sleep there two nights before our hike. My, 23 people!

As we left Mosedale Cottage, the guys took a break from their  repairs and one of the last things I heard them say was, “Did you put the kettle on?” That sounded like a nice cup of tea in the making. 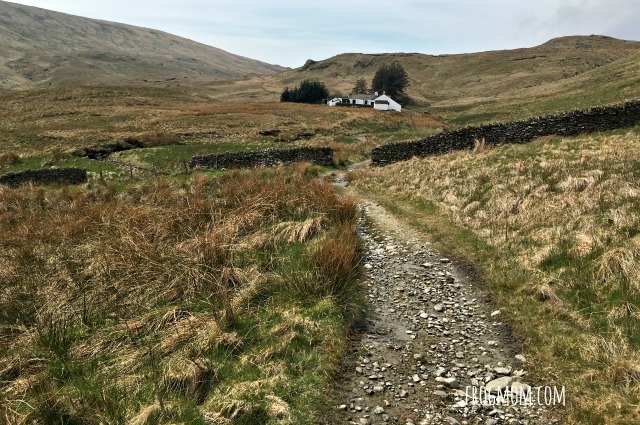 In our geographical misadventure, Mosedale Cottage was the last point on the map where we knew for sure our location. A building is a building, you can’t argue with that. But a hill that looks all the other hills around it? Hmm.

We followed the trail past the abandoned quarry and, as instructed by the old guys, looked for a left turn on the trail right before the bridge over Mosedale Beck. They had said right before the bridge and we knew better than to argue with local wisdom, but heck, what left turn? We never saw it or possibly, we had missed it a long time ago. Either way, it was time to improvise. Seeing as our watch already showed 1pm and we were meeting friends at St Mary’s church at 5pm for a tarn swim, we didn’t dally. 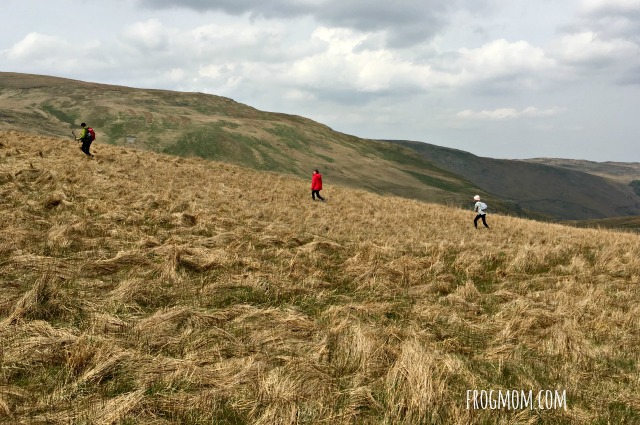 Half an hour later, we had carved ourself a boggy path across the hill, bearing north as much as we could, raising our boots high to avoid twisting our ankles between big clumps of grass. It was hard work for my 11-year-old who’s got shorter legs and she stayed behind a bit, but we all followed an imaginary route to the ridge. Once at the top with open views, we changed direction.

Judging by the map, we were somewhere west of Nabs Moor and headed towards Captain Whelter Bog, although there was no telling which side of the hill was boggier than the other. It all felt pretty soggy to my boots. We even spotted tadpoles by the dozen in puddles. I suspect that when it rains, you can probably swim the course between tufts of grass–head-up breaststroke to enjoy the views. 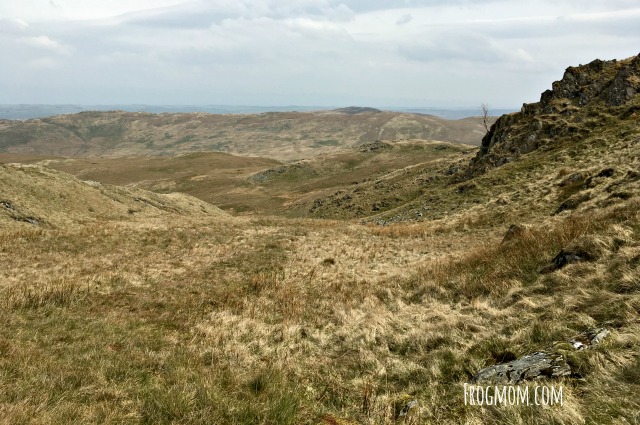 Reaching a saddle, we turned around and saw this glorious landscape. Doesn’t it seem to go and on and on? To my girls, it also felt like it was going on and on and on, but for different reasons. To distract them from the obvious–where were we, goddamnit?–we kept their spirits up by pretending that we knew exactly what we were doing.

“See, we are following a rough ridgeline bearing west and sooner than you think, we’ll hit the nice (emphasis on nice) trail going back to Sadgill Bridge (and the comfort of the car).”

They agreed with our plan but truth be said, they would have agreed with any plan to cut this hike short. Drone, magic carpet, you name it. They’re not big fans of long slogs through boggy moors. 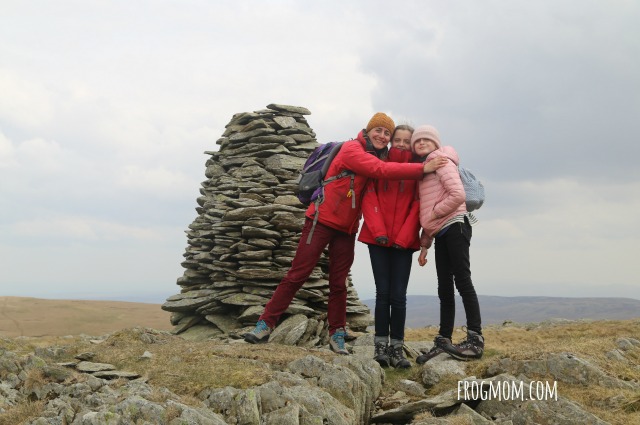 And then a miracle–cairns! Cairns mean summits, right? And summit meant we were indeed, very close to the trail we were looking for. We reached the cairns between Artle Crag and Artlecrag Pike (subtle difference) and stopped in a rocky recess (very windy spot) for a well-deserved cup of tea and cookie. 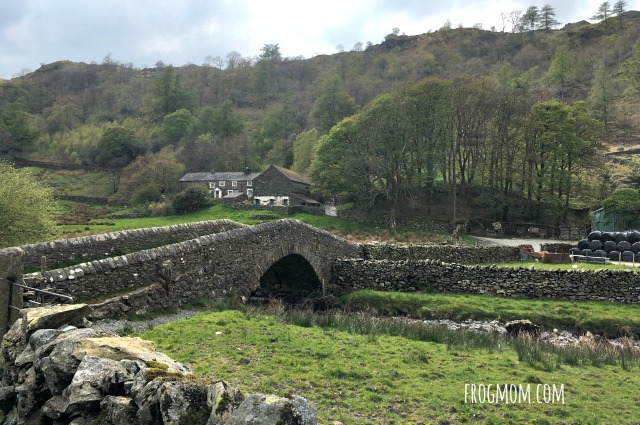 An hour or so later, we were down in the valley, back to jumping lambs and the clear waters of the river Sprint. Even the weather was playing along and we were hot under the sun. This concluded a very interesting foray into unique landscapes of the Lake District. Who knew Longsleddale could be so different?