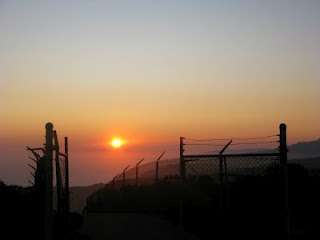 > Hiking the Marin Headlands: Remains of the War

Hiking the Marin Headlands: Remains of the War

Right outside of San Francisco, the Marin Headlands still hides a number of wea 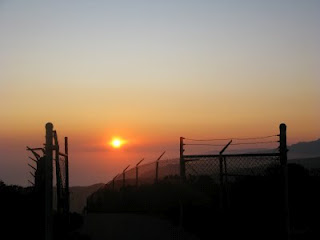 thered treasures, like the 1877 Point Bonita lighthouse 124 feet above the sea and its swinging bridge, or scattered remains of the three wars that California prepared for and never fought: WWI, WWII, and the Cold War. If you like to hike, you’ve to check this out. Up on the bluffs overlooking the Pacific Ocean, Hill 88 is a sight to behold with its destroyed concrete platforms, its lonely heliport and its obsolete barbed wire – all surrounded by blackberry bushes and wild fennel plants.

For once, I opted for an evening/ night hike and decided to show the place to Swedish friends of ours. They knew about the Marin Headland 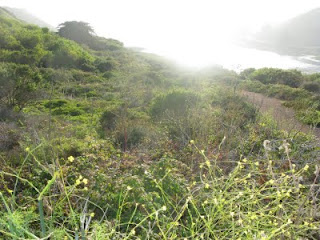 s, she had been to the Headlands Institute, but the hills remained unexplored. Time to sweat it out!

We parked in front of the quaint chapel turned visitor chapel two hours before sunset. Our friends’ little girl, 5 years old, wondered what we were up to while we were putting out shoes on (I had kept it a secret). “At least we’re not going up there!” she said laughing, pointing at a hill. “Well…” I answered, “…what if we were?” At 6pm on a midsummer night, I thought it would be a blast. Three hours to hike 7 miles with 833 feet elevation sounded like a good plan with a picnic and a bottle of wine at the top to break the walk. That was without counting with (i) the flash light that’s usually in t 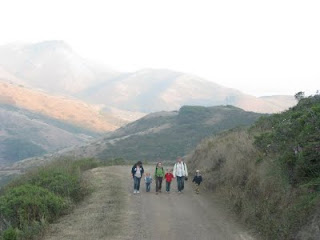 he car but wasn’t there that day; (ii) the moon that was full two days before and should have shone high above the hills right after sun down, but took a break that night.

I knew it would take us one and half to two hours to reach the picnic spot so we started without delay. We walked down the main road from the visitor center, then went north on Bunker Road. “What are we looking for? What are the clues” asked the children. The first clue was a wooden bridge on the left. It’s the point of entry to join the Miwok Trail. Right there, the trail i 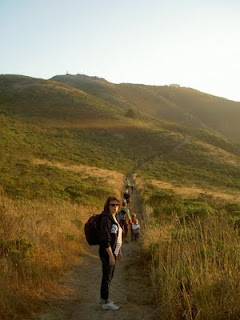 s wide and flat. In fact, it looks just like a fire road. Left and right, I pointed to some dinosaur plant, the perfect stackable plant whose leaves are barely visible. We also warned everybody to walk in the middle of the road because of poison oak. After a while, the path climbs gently and the rolling hills of Gerbode Valley and Oakwood Valley spread out before your eyes. There, you realize you’re really out in the wild and it’s really quite lovely. I love this low chaparral and it reminds me in a way of the Mediterranean garrigue (minus the thyme, rosemary and lavender).

As we reached Wolf Ridge Trail, we got the golden part of the sun rays and the tough part of the hike started. Just when we thought we were alone in the world, a runner passed by us, wearing a race number on his shirt. WTH? For better or worse, the Headlands Hundred ultra marathon was taking place that day on the same trail. I learned since that these people ran 50 to 100 miles (4 different loops) over a maximum time limit of 33 hours. Basically when we were just warming up, 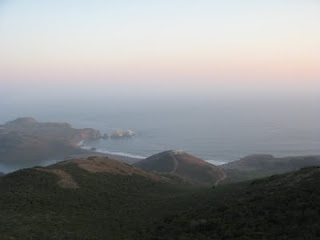 they already had 50 miles in the legs and the rest of the night to complete the challenge. Amazing. As you will see later, that ultra marathon saved us on the way down from the army base.

So we were going up, and up, and up and our junior crew started rebelling against the grade. “The top’s right there,” we kept saying, and the top took its time to come. Finally we saw a little flag (for the race) and there we were: the paved road that leads to Hill 88. On the other side the Pacific Ocean, Rodeo Beach at the bottom, Bird Island and the Golden Gate Bridge in the distance.

We reached the army base and looked around. There’s an eerie feeling wh 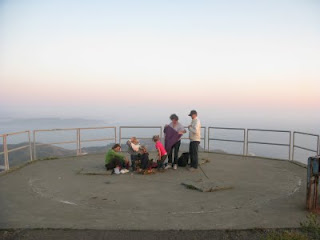 en you step into an abandoned world that’s not waiting for more than day and night. While some buildings look relatively unscathed, others look like they’ve been trashed by rockets and tanks. Our friends spread a blanket on the platform that overlooks the ocean and we put down our bags. The big show was about to begin. We were minutes away from the sky turning ablaze and the sun dropping in the sea.

Our three girls stood up motionless as the big orange disc disappeared behind the crimson horizon. We adults, while lending a distant eye, had more serious stuff to do such as: opening the box of tabouleh, cutting the bread, getting the boiled eg 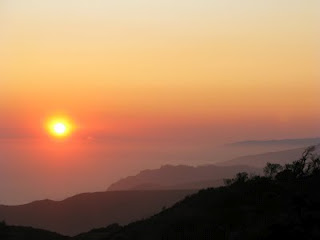 gs, and sorting out the cheese – as well as uncorking the bottle of wine that nicely rewarded the effort. As the sun steeply dropped and bowed out of the day, the temperature felt like it dropped in unison. May I have another sip of wine please?

However, now was now the time to linger. The night would be upon us any minute and we had to make it back to the car – in the dark. I sort of knew the way because I used to lead environmental education hikes here seven years ago – during the day, that is. At night, things do look quite different and perspectives are lost. Fortunately, the ultra marathoners were organized and had lined the trail with green glow sticks that became our path to

the holy grail. We followed them, at first briskly then more quietly as lights dimmed and twilight turned to pitch dark.

Should we go here or there? Should we take a shortcut or follow the main road? Each time, the ghastly green lights led us on the right path, if taking us on a longer way on occasion. One of those went through two WWII-era tunnels on the Coastal Trail that – I believe – are part of the Battery Townsley. It’s like an underground fort that in its glory days (1940) could fire a one-ton shell to a battleship 25 miles away. At night, the place is either creepy or intimidating. For the children it was scary. To motivate them to go through the tunnels (ever darker than the dark outside), we all sang The Sound of Music‘s Do-Re-Mi song. It resonated so well that with the harmonies (our Swedish friends are singers), even the Trapp family would have approved.

An hour or so later, we reached beach level and breathed a sigh of relief. Next time, promise, I’ll take a flash light or headlamps (like the runners).

However if you fancy a ranger-led full moon hike to the Point Bonita lighthouse in the Marin Headlands, follow the details here to sign up because they are extremely popular. They’re organized once a month for the full moon and the place is truly gorgeous.

3 thoughts on “Hiking the Marin Headlands: Remains of the War”