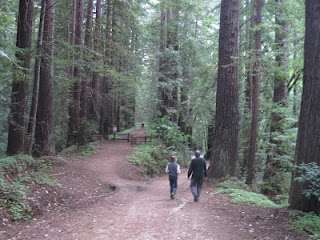 > Hiking to Maple Falls at the Forest of Nisene Marks

Hiking to Maple Falls at the Forest of Nisene Marks 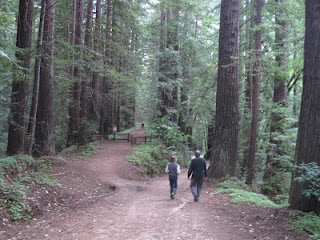 Hiking through miles of densely wooded terrain, you would never know this land at the Forest of Nisene Marks State Park was bare in 1923. Not a single tree left in the ground. All chopped down between 1883 and the 1923. The Forest of Nisene Marks State Park, now one of the biggest California State Parks, was a major logging operation with a railroad, residential housing, telegraph office and school. Look at the photo today. The current forest results from fantastic reforestation efforts and you will be walking through miles of second-growth redwoods that look like they’ve been there forever. What a beauty. Miracles do happen after all. 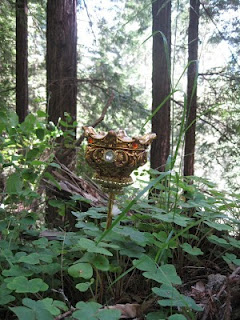 In the morning we checked out the Old Growth Loop set in Marcel’s Forest, a recent addition to the park featuring ancient redwoods and the beautiful Aptos Creek running through canyons. We even stumbled upon a random golden crown sticking out from a redwood stump and our girls’ imagination ran wild with winged forest creatures at every other turn thereafter. Whoever got the crown where it is had a brilliant idea. Finding treasures in forests is a rare treat.
After this appetizer, we set out for the main course, Maple Falls, one of two major waterfalls of the park. Before you go there, make sure you download and print this map, as the park suffers from budget cuts and we couldn’t buy it at the entrance the day we went. You can get a green paper map created by Jeff Thomson, author of Explore – The Forest of Nisene Marks State Park by the entrance kiosk but once you hit the trails, they are not always well-marked and some junctions can be confusing. 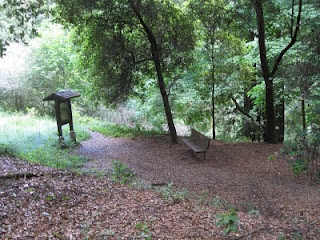 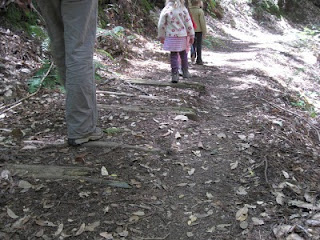 This portion of the Loma Prieta Grade trail follows old railroad tracks. The Southern Pacific Railroad had Chinese workers cut, grade and lay a standard gauge railroad up the steep canyon leading to the upper Aptos and its treasure trove of redwood trees. As a result some 150,000,000 board feet of lumber flowed down the railroad line to markets all over the world from 1883 to 1923 (you can find out more about this fascinating history in the Amended General Plan of the park). As we walked steadily up the canyon, we kept seeing eroded tracks and could see where bridges had disappeared and where the tracks resumed further up the trail. 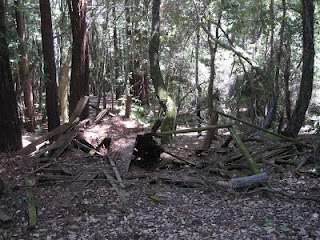 I need to look up why China Camp was renamed Hoffman’s Historic Site but the truth of the matter is, there isn’t much standing there anymore. If not for the interpretive sign you might even walk by it and not notice. While there used to be a thriving community of 400 lumber workers, only collapsed roofs and broken doors remain. Come to think of it, it could be creepy but it’s all so quiet that you want to try hard and imagine a bustling village here.

As the girls were getting tired – it is a long and steady climb – we set out for the Bridge Creek Historic Site where we initially intended to turn back. However as we reached the junction, the Maple Falls seemed so close that we just couldn’t pass. An extra mile and we would call it a day, returning to the trailhead. 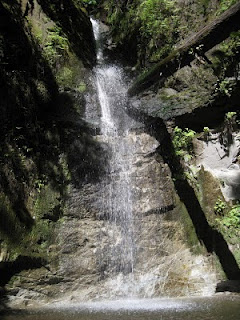 Unexpectedly the kids enjoyed most this most challenging part of the hike, an adventure-course type trek through a narrowing canyon hopping over rocks, crossing the river several times without bridge and crawling under fallen trees and over land slides to the bottom of the gorge where Maple Falls are finally revealed behind a big boulder.

We sometimes had a hard time keeping up with the 6-year olds but the 4-year old kept tripping on roots and rocks so that was definitely slower. The effort was worth it though. With all the rain we’ve been having, the 30-foot tall falls were gushing fom a granite slab and splashing into a circular pool surrounded by maple trees. Quite the origin of the world.

We stayed a while there. The girls threw rocks in the pool, they splashed around a bit, the sun was shining and it was a rare moment in the hike where we were actually under open skies and not under tree cover. We enjoyed it as long as we could before walking back through Bridge Creek Trail. 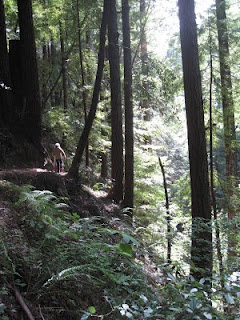 Walking back was a breeze and strangely enough, the children picked up the pace so we were a lot faster than on the first half of the trail. It’s not that it was all downhill but there was definitely less climbing than going north. Following the banks of the river was refreshing and on occasions the creacking of tall trees above us made us pause. Obviously the girls kept looking for golden crowns behind redwood trees but this had been a unique surprise. The real treat, for me, was definitely the falls and I recommend you see them while they are still flowing generously.
Directions to the Forest of Nisene Marks: From Highway 1, take the State Parks exit, turn east towards Aptos and then left on Aptos Creek Road that you follow until you hit the park’s main road.

Camping: As the park does not offer any camping options other than backpacking, we camped at the nearby Henry Cowell Redwoods State Park.