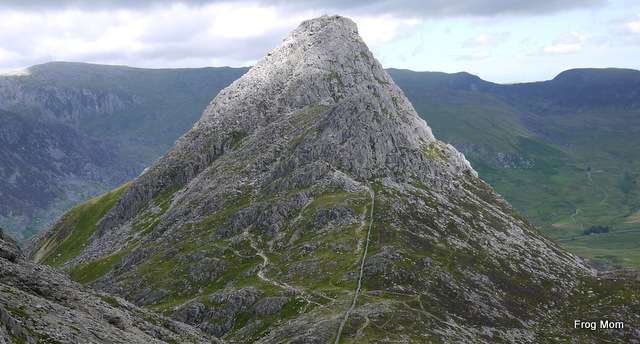 > Hiking Tryfan, the Glyders and Castle of the Wind

Hiking Tryfan, the Glyders and Castle of the Wind

Anybody who claims size does not matter in mountains knows as much as Jon Snow, which is to say nothing. So Tryfan may only be a 3,000 footer but I had to earn it, pushing my heights comfort zone as far as my hands could reach on the rocks and banging my knees in angular cracks looking for good foot grips. That’s what I call a hands-on mountain and it was well worth the effort. Ironically, getting to the top was only a quarter of the fun that day. Tryfan was the first of four summits my husband and I hiked, following a classic Welsh tetralogy in Snowdonia. To any hikers looking for a challenge with steep sections, this itinerary will kick your butt and the rock explosions of Castle of the Wind offer some spectacular eye candy along the way. Please please please, don’t forget your camera. You will regret it.

Snowdonia is a national park in north Wales featuring the Snowdon mountain range at its highest point and satellite ranges around it. Our initial plan was to hike Snowdon, probably like all newbie visitors to the area. We wanted the obvious, which on a fine August Saturday morning is delirious. At 9am, the parking lots of Snowdon were spilling out cars and touring buses were delivering throngs of tourists by the minute. No way I’d driven five hours to Wales to bring up the rear at the top of a mountain. In my guidebook we’d spotted another beautiful hike for the following day. This would be it – hello Castle of the Winds!

My husband checked the maps while I drove and read a sentence in the intro paragraph to our walk. “Strong walkers may consider including the ascent of Tryfan as a prelude to this walk.” Since the Glyders/Castle of the Winds loop was just over 5 miles, we could definitely add a mountain at the beginning. Any sensible person might have read the Tryfan chapter first but we were eager to start the day and the instructions for the walk were simple enough – “up” they said.

From afar, Tryfan is said to resemble a surfacing shark with three dorsal fins. To me it looked like a sharp torpedo with spikes. Whatever you think it looks like, it’s intimidating. Basically it’s a steep walk half of the way up and then you’re facing a massive barrier of rock. No choice but to get your hands out of your pockets. There at the heathery terrace mid-way up, I scanned the North Ridge, speechless, looking for obvious routes. There were none. It was a free for all. People were scrambling each and every way as long as it took them upwards.

I sighed. As much as I hate being afraid of heights, I can’t get it out of my head either so I have to deal with it. My usually-impatient husband knows to handle me like fine porcelain in these situations so I don’t fall apart and freeze. Coming towards us, a group of three gave me a glimmer of hope – a father and two teenagers. If they found a good route, I’d follow them. I trust kids to have a good balance and I trust a father to keep his kids safe. So I did follow them but they were more nimble and fearless than me. The dad was cool, though. He waited for me twice. Having him in front and my husband behind was comforting enough that I was able to go over a couple difficult steps. When I realized I would not be able to follow them up more exposed boulders, I looked for an alternative and found it.

To the left, I spotted a small gap and shimmied my way between boulders, finding a small descent and then an ascent up a gully. The gully was at the base of another rock wall, steeper but in my mind less exposed. I scrambled over big rocks, listened to my husband’s encouragements and a final pull took me to the top of the central buttress. At last! I was shaky but fine and saw a few climbers with ropes and carabiners emerge from the Milestone Buttress. The summit was crowned by two big boulders and an old guy told us they were called Adam and Eve. Anybody who takes a leap of faith from one to the other gains the “freedom of Tryfan.” Since the landing area is teeny tiny and surrounded by steep drops on two sides, it’s a crazy stunt. I was happy to photograph another hiker doing it but I asked my husband to refrain. In hindsight if I were to do this with my girls, I’d bring ropes, harnesses and helmets for them. Tryfan is no joke for little ones.

I looked ahead at our next challenge – Glyder Fach. Now the real hike could begin.

Coming down Tryfan, we reached a stone wall on the shoulder that connects both mountains and followed it towards Glyder Fach. The impressive Bristly Ridge of Glyder Fach looked too daunting and steep for me so I opted for a tedious scree gully to the left at the base of the cliffs. Laboriously we went up the well-trodden path, slipping now and then because of the unstable terrain, slowly inching our way up the mountain. The sun came out of the clouds for one second and illuminated the tippy top of Tryfan, giving us the pic I chose to illustrate this story. It was beautiful. Since I was a lot more comfortable on this path, I considered it to be a simple steep stroll and we reached the top of the ridge quite easily.

Holy dragonslayer macaroni! My father would have been in heaven. Bizarre rocks, upright rocks and gigantic rocks. The summit is strewn with a mad pile of rocks, some in flat-ish jumbles, others in imploded geode formations, all in sizes ranging from human to whale. Wow. That was so different from the scenery on Tryfan that I was stunned. Where did this all come from? Oh how I wish I knew more about geology. The wind on the summit was fierce and I understood why one of the upcoming formations would be called Castle of the Wind (Castell y Gwynt in Welsh).

If you could imagine a giant holding long rectangular boulders in one fist and letting them go like in a game of pick up sticks, this might be the result. Utter chaos and for us hikers, the best place on earth to picnic. We whipped out the saucisson, blueberries, pate and crackers, and marveled at the landscape around. A few feet from us was Cantilever Rock, a seemingly risky balancing rock that’s a photographer’s delight as it protrudes way beyond the rock it’s resting on.

The temperatures were definitely down and the wind whipped my face, chilling me at the same time. We needed to move on and warm up.

Not a true summit in itself, Castell y Gwynt is the most monumental of the rock formations on the plateau. If I could some day, I’d hike here in the dark and watch the sun rise on these rocks on a snowy winter morning. It would be amazing and frost-biting cold. One of the guys we met had camped here the night before and it was a rainy night. I wondered how anybody could sleep with the noise the wind made, let alone with rain falling hard on your tent? Some humans are very resilient. This guy was part of a fundraiser for mountain rescue efforts and I could see how this area would be a magnet for accidents.

Our next challenge rose straight ahead, just a higher version of Glyder Fach a mile or so farther.

If Glyder Fach is spectacular, Glyder Fawr is puzzling. We just came from the land of the giants and entered the land of the goblins. Like its sister mountains, Glyder Fawr is rocky territory but contrarily to Glyder Fach – where rocks are big and impressive with smooth edges – rocks on Glyder Fawr are smaller and thinner with razor-sharp edges. I cut my hand open just leaning on one of them for a photo. Fortunately for us, Glyder Fawr presented no difficulty to hike as it’s a big rounded top with piles of shattered rocks all over. Again, I wish I knew my geology and was able to tell you why the two summits differ so much when they’re just a mile apart. Maybe a geologist would be so kind as to comment on this post.

From the top of Glyder Fawr, we enjoyed unobstructed views to the open sea and realized we were in fact very close to the coast. How had I not noticed this earlier? Happy to reach the end of our high route, we struck a few poses on the rocks and took shelter from the wind in a rocky corner to eat some delicious fruit cake from Fortnum & Mason.

Now was the time to come down and it was painful. Watching where we placed our hiking boots, we descended the mountain slowly on the uneven stone steps and scree tracks. More than once I came down on my butt to keep going. Both of us slipped once but we were soon back on our feet. My husband’s knees told him to be careful and my legs asked for a new pair of thighs.

It’s with relief we reached Llyn y Cwn, a slope right above another natural wonder on our hike, the Devil’s Kitchen. The name Devil’s Kitchen comes from a peculiar cleft that splits the cliff. From afar, sailors saw mist rising from the dark crack and likened it to steam rising from a devil’s cauldron. Sure beats a lot of place names I’ve heard. In the middle of the cleft trickled a white stream that came down the mountain in pint-size waterfalls. Before seeing it, we assumed it would be mighty because our faces were sprayed with droplets of water on the trail. However upclose it was quite small and plunged deep down the rocks to a lake below.

We followed the path down to the lake, a place where we rested a while contemplating the waves created by wind gusts. While I had my swim suit in my backpack, it was getting cold and windy so I left it there. Up the face of the mountain, I noticed several climbing parties tackling slabs, cracks and overhangs. Downwards we walked on the rocky path until we reached a grassy path – marvelous to our feet, really marvelous – and nice wooden bridge by an organic coffee and tea truck. Oh how sweet that cup of tea was! I bet my husband enjoyed his espresso all the same.

To get back to the car, we followed the edges of Llyn Ogwen and spotted more climbers bouldering along the way. Our friends Christine and Martin would love it here. It’s not the Yosemite but people are having fun!

It was a beautiful hike and our achy legs on the next days showed us how much we’d walked. Even my shoulders were sore! That was the scrambling bit. Definitely a full-body workout. We’ll be back, I want to see more.