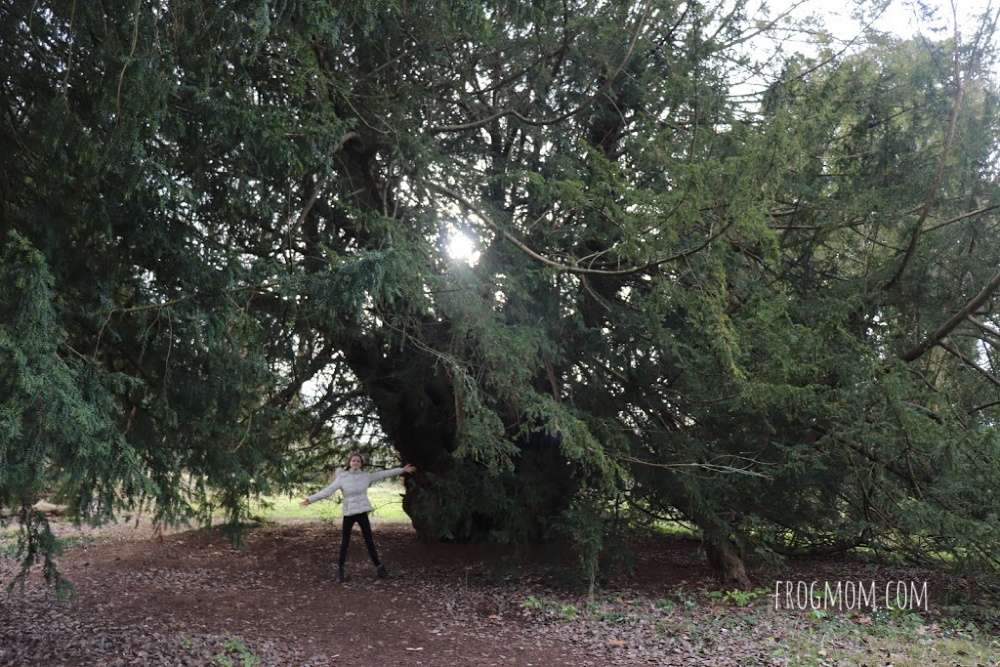 Few trees can claim that they witnessed the birth of modern Europe and the signature of the Magna Carta. The 2,000-year-old yew tree known as the Ankerwycke Tree, close to London opposite Runnymede, is. Facing a romantic priory in ruins, the tree makes for a wonderful picnic spot or a halfway break if like us, you start 6km away and meander through wild suburbia to reach this magnificent yew.

The idea for this hike came from a coffee table book on Ancient Trees of the National Trust that my mother offered me at Christmas. Usually, these books are best at gathering dust but I opened mine and realized that it was a treasure trove of tree destinations. Ashridge Estate, Stourhead, Box Hill – iconic names of ancient British forests or gardens. Not that trees are a new pet peeve for me. Two years ago, I went solo backpacking at Hadrian’s Wall to find the Robin Hood Sycamore Tree, and last year with my girls and my husband, we hiked to the Whomping Willow, the Harry Potter tree, near London. Both great tree adventures.

Inspired, I looked for a tree close to London and found the Ankerwycke Tree. I then researched a long-ish walk that went past the tree and found Graham Pearcey. Graham Pearcey is not a walk, it’s a guy who writes about walks and who has a Surrey walks page on his personal website. He’s also a preacher so you can soothe the body and the mind in one stop. Anyhow. Graham came up with this crashed bean-figure 12k loop that against all odds, includes most of the fresh water reservoirs between Heathrow Airport and the famous Ankerwycke Tree. 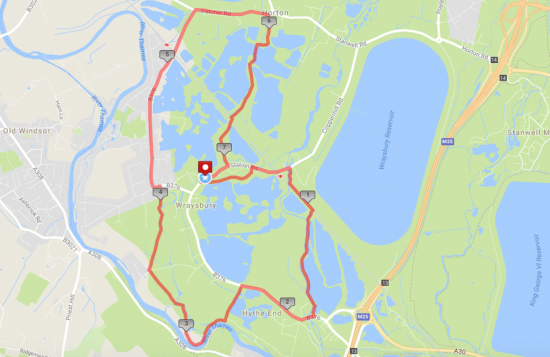 It was quite an unlikely itinerary but Graham is good at descriptions and it worked.

We started in Wraysbury, just a few minutes past Heathrow Aiport, Terminal 4 (coming from West London). I don’t know much about Wraysbury but the Perseverance Pub was a handy spot to park a Zipcar and get started. From there, we crossed the road and went through a squeeze stile, as illustrated by the picture below. As you can see, it’s a stile that squeezes you tight if you try to run or cycle through it (I guess). 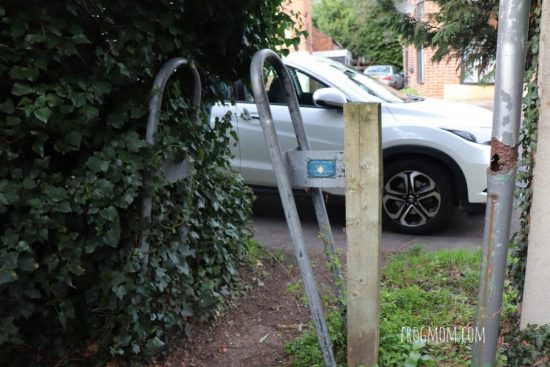 Marching through it calmly, we didn’t suffer any ill effects. Within minutes, we reached the first reservoir, a large lake with tree islands in the middle and a few Sunday morning ducks. Since it was the first of a string of reservoirs (many of them made from former gravel pits), we kept walking along. 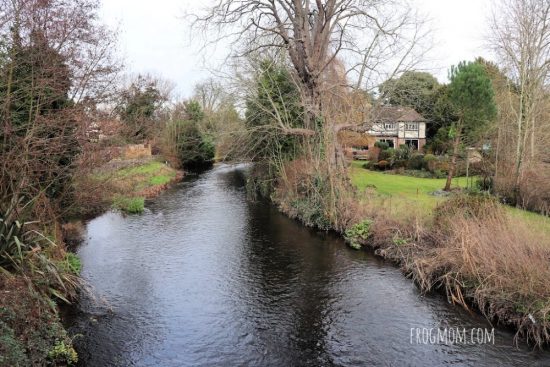 Further after Wraysbury station, a bridge took us over Colne Brook, a shallow weedy river flowing quietly through the village. Though the proximity of the airport made any type of conversation difficult (“What did you just say??”),  the neighborhood was green and pleasant, which made up for the noise. Shortly after, we reached a narrow passage flanked by a wire fence on one side and concrete posts on the other. Charming set up but hold on. We were about to cross the railway. 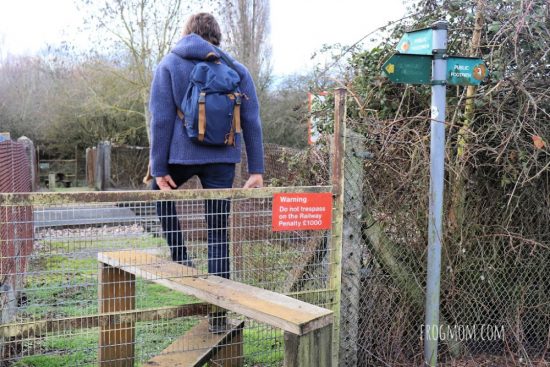 “Is this safe?” my girls asked.

Crossing railroad tracks is never safe. Even when there are no trains in sight. Of course, there weren’t any trains in sight and we could see quite far. This was by no means a Stand By Me scenario but still, we didn’t walk. We ran across the tracks and felt utterly relieved on the other side. Phew, the things we do for a shot of adrenaline.

This led us to a strange reservoir where teenage anglers were fishing for pikes (a very cheerful bunch they were) and where the trashy side of suburbia showed its ugly face in the form of Redbull and Foster’s cans under trees and plastic bags clinging to submerged branches of trees, gathering weed in the brook. So much litter on the ground! I regretted not having a trash bag to pack this all up but honestly, I would have needed a semi to haul this. There was so much trash. Still, beyond the “No Fishing/ No Boats/ No Water Sports/ No Swimming” sign and if we didn’t look too close, some parts were actually quite lovely. 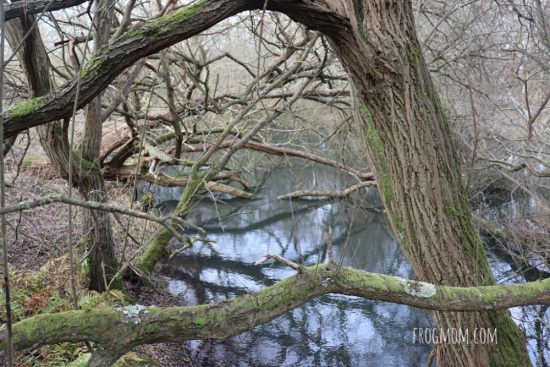 Right? We continued through the area known as Wraysbury Lakes, a mosaic of open water islands, grassland, scrub and woodland, some parts designated as Site of Special Scientific Interest (SSSI). With a ray of sunshine and fewer planes flying overhead, it would honestly have been quite nice but that’s what we got for walking on the Western Approach path of Heathrow Airport. Note that if you are a plane-spotter, this is a cracking walk as we were almost always on the flight path.

After the lakes came an unsavory portion of heavy-trafficked country road without pedestrian paths and fast-passing cars. Then a village where a house displayed creepy dolls in its front window across a pub turned Indian restaurant. Then a green country lane and then, bingo. Past a wooden kissing gate, we spotted the National Trust sign for Ankerwycke. Eureka! 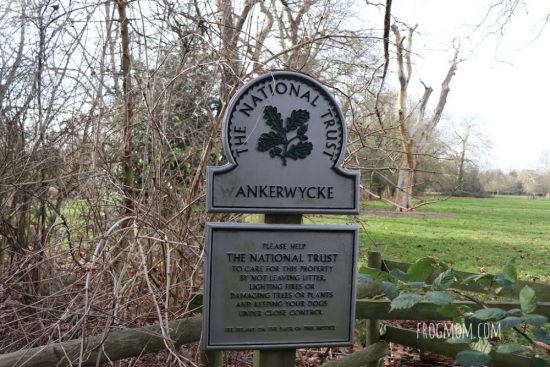 Soon, we would find the coveted Ankerwycke Tree, which was rather timely as it was lunch time and we were getting hungry. I don’t know how the National Trust manage their properties, but as soon as we were on National Trust land, it was like the nature switch got flicked on. Nice big trees, no trash in sight, well-maintained paths, no human buildings – it sure was a radical change from before.

Before the tree, some local history. Ankerwycke Priory, a Benedictine nunnery lies across the River Thames from Runnymede and was founded in the late 12th century, dedicated to St Mary Magdalene. Historical records note that it was “another poor and small monastery of which very little is known” and we could leave it at that except for a juicy anecdote. In 1197, a runaway nun gave the priory a good deal of trouble. 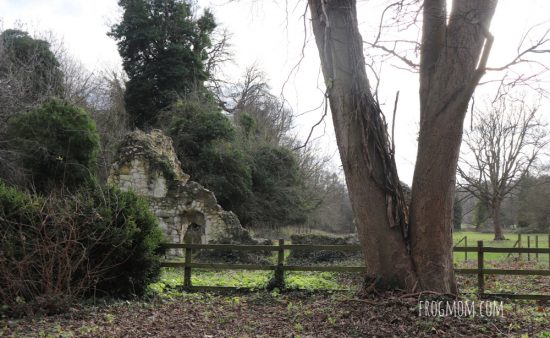 This daughter of W. Clement had been 15 years professed when she got tired of the cloister and took off. Instead of just asking her friends for shelter and protection, she claimed a share in her father’s property, saying she had been forced into the monastery against her will by a guardian who was stealing her inheritance. Surprise scenario at the end of the crusades. As you can guess, this didn’t go down well and the affair was brought before none other than the pope himself, Celestine III. A fervent excommunicator, he ordered her to return to her monastery on pain of excommunication. Guess what, the poor girl was indeed excommunicated and never saw her father’s inheritance. So much for justice. 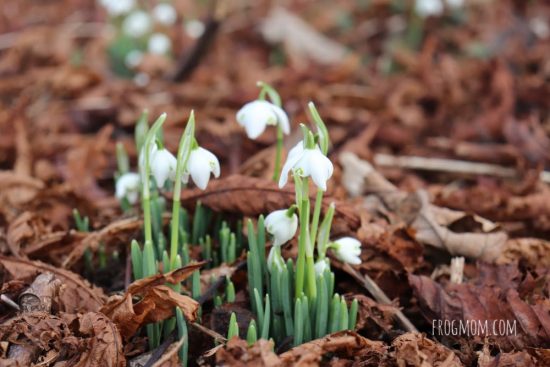 Last Sunday, St Mary’s Priory looked very romantic in the winter sun, a small ruin showing two adjoining crumbling walls made of chalk and an arched doorway. In front of the priory, I got down on my knees to photograph the first snowdrops of the season, these delicate white harbingers of spring.

Apart from its venerable age, the Ankerwycke Yew’s big claim to fame is the Magna Carta and royal courting speculation. According to popular belief, King Henry VIII courted Anne Boleyn under this tree, and some suggest that he even proposed in its shadow. While Magna Carta is said to have been sealed at Runnymede, others argue that the event actually took place on the other side of the river, perhaps under this very yew. 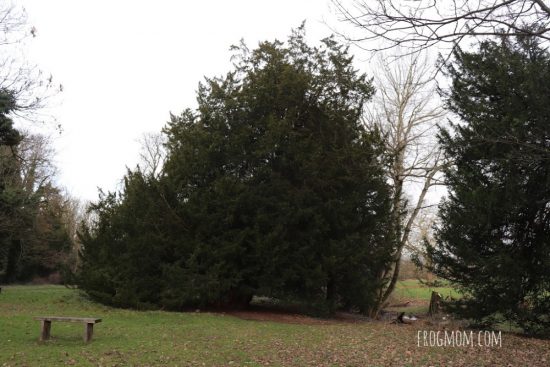 Whatever the real story, it was a big old tree that looked like a massive bush from afar. 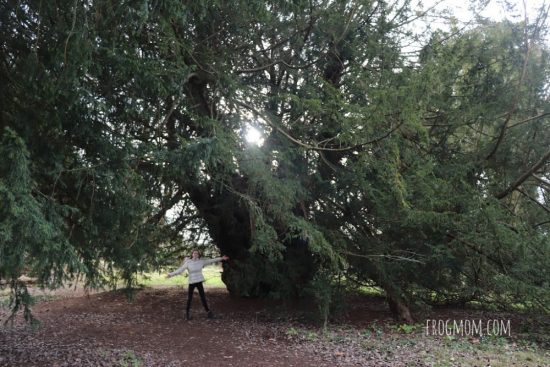 Under the canopy, it was a different beast altogether. Massive trunk, 8m of circumference, old gnarly knots and a feel of ancient history beneath the bark. This tree had seen a lot and standing under it, my 13-year-old was slightly dwarfed.

We sat on a picnic bench (there were several in a semi circle around the tree) and ate a delicious potato and pearl barley porridge with salted mushrooms, a dish we discovered in Estonia when bog-walking at Soomaa National Park. 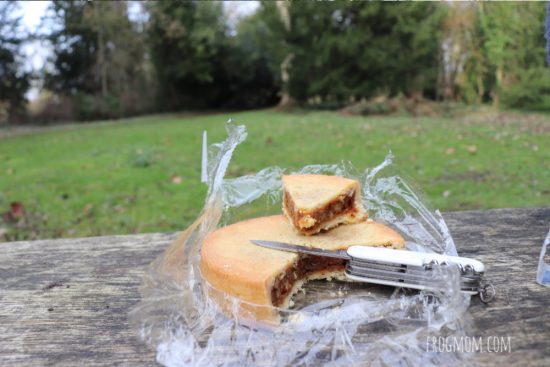 Dessert was a scrumptious Swiss walnut and honey tart.

Since we were only 2/5 of the way into the hike, we left this magnificent tree to continue our exploration of Wraysbury’s reservoirs. 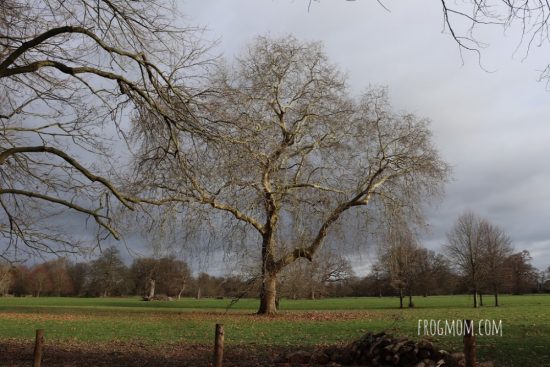 After going through a magnificent tree-lined alley by mistake, we backtracked and hopped into the next field over, which led us to more fields and a poney farm. 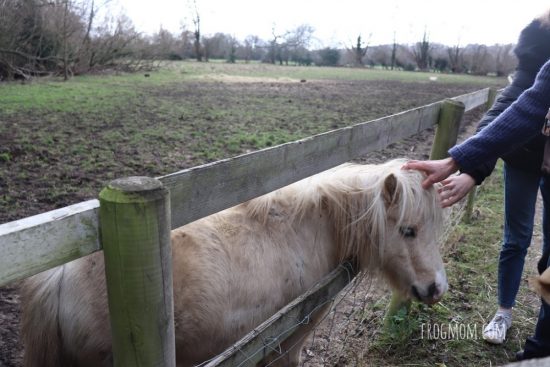 These poneys weren’t shy and came to us, which delighted my girls.

“They are so cute!” they said. And indeed they were, with their sturdy bodies on minuscule legs.

What wasn’t so cute was the field of rubbish that awaited us on the other side of a kissing gate, and the rusty barrels of oil left at the bottom of a ditch by the side of the road. All this talk of rubbish leads me to…

Two years ago, our first hike of the year was a walk around Rochester and some parts were so awful that we nicknamed it the Great Unexpectations hike. It’s become a referential low point in our family Sundays. The Ankerwycke walk had high points and low points. 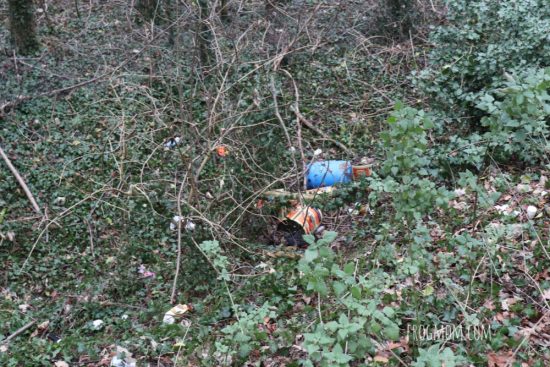 Both my husband and youngest daughter liked it and were happy to be outside, as we hadn’t hiked in a while. My oldest daughter and I liked it too but were so taken aback by the amount of residential and commercial waste on some parts, that we dubbed it the Greater Unexpectations walk and laughed a lot.

This doesn’t mean that it’s a bad walk, in any way, but be ready for lots of trash (and be smarter than, bring a bin bag to clean up along the walk).

After a long and tedious stretch in the city of Wraysbury, we reached the last portion of the hike and the last green spaces too. 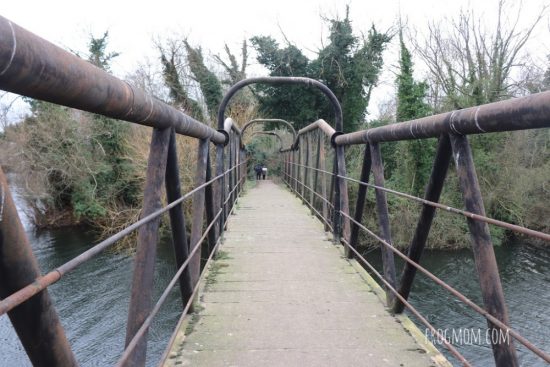 After a footbridge, we were back on reservoir territory and enjoyed the last waterside stretches of the hike, though the noise of overhead flying planes became louder. We were clearly close to the trailhead! Half an hour later, we were back at the Perseverance Pub, slightly knackered and happy. We were ready for tea.

If I were to do this walk again, I would do it in spring or summer as the foliage and warmer water would make for nice swimming opportunities both at Colne Brook and in the River Thames.